Kibbutznik said:
Do you mind sharing the link to it?
Click to expand...

I did notice that Cantonese is the second most common language in England, I assume this has a lot to do with Hong Kong being officially part of the UK and the presumptive freedom of travel between them, also I did notice that the Commonwealths get far more seats at the House of Delegates than the Dominions.

Lmbrd said:
What's the ideology behind the five Californian parties? How is the balance of power between Presidency and Cortes Generales in TTL California compared to OTL US?
How many inhabitants does California have compared to OTL? 106 congressmen seem very few.
How much power do departments and provinces have? Is there a municipal level below provinces?
Click to expand...

Roughly:
-PPP: Social Democratic broad tent party. The left-wing is pretty much socialist, and the right-wing is market socialist.
-VOCA: Right-wing populism. Focus is on traditional family values, strong borders, and the preservation of the Spanish language.
-UD: Councilist/Socialist. The left-wing of the party advocates for Spanish-style socialist reforms, while the right-wing of the party are more radical socialists than would be allowed in the PPP.
-PPL: Liberal, capitalist party. Focus on social liberalism and market reforms to expand prosperity. Emphasis on public-private initiatives.
-PCU: Conservative, capitalist party. Some focus on the family, moderate social conservatism. Seeks market reforms and privatisation in all aspects. Lower government spending, lower taxes.

The Presidency is a very powerful office. The President of California has broad executive powers, far more than the United States. California operates under a philosophy of "the powers of the President are limitless, until Congress limits them." This is why a split government is incredibly harmful towards good governance in California. Elections are only every 5 years, no midterms or recalls.

California has around 22.2 millions inhabitants.

California is officially unitary. Departments can, and do, change, but the provinces have more or less been stable for several decades. New ones are not often created historically. The last department to have been created was Armando Cicerón, which was split off from La Plata, which used to Casalektavi, Moraleja, Tierras Vastas, and Natakkoa. There are many, many municipalities in each province - those are rather arbitrary and are not effective government structures. Most of the power rests in the provinces.


HeX said:
Is voting compulsory in California?
Click to expand...

It is not. The voting period is extremely long, extremely accessible, and there is a tax credit for doing so.

How goes it on a list of US presidents? So far we know Alexander Hamilton and George Clinton, but who else before the office's untimely abolishment by President-Chairman Hogan?
Click to expand...

The Presidential list is still a work in progress. It is not high on the list of upcoming updates, sorry!


Umbric Man said:
That and Quebecois. I wonder if stronger assimilation policies or whatever gave a stronger Anglo influence, or the two tongues really standardized themselves in an attempt to keep unique.
Click to expand...

Arthur Marston said:
Any particular reason why Acadian French is considered a separate language from European French?
Click to expand...

France and the Empire fought a rather big war, and had a rather long period of tensions before then. Rebranding was done on purpose. Also, Acadian sounds more like Chiac than, well, French.


Analytical Engine said:
Wait a second - when did Corsica become part of the Empire?
Click to expand...

Kibbutznik said:
I think they were occupied when the Napoleonic pretender returned, IIRC.
Click to expand...

GriffinFTW said:
I think they were actually taken after the Great Continental War.
Click to expand...

Kibbutznik said:
Were they? The wikipedia article for France still showed Corsica as part of the metropole, and that was before the ITL Napoleonic fracas. The lack of a local flag and representation also suggests that this annexation is a recent development.
Click to expand...

There is a major revision to the world map (well, not major - I am changing the art style slightly, and I only did a single major rework of an area that has thus far been untouched) in the works. The lag of a flag or representation is intentional.

There are no elections on the island of Corsica.


UrbanNight said:
What's the difference, if any, between a Commonwealth and a Dominion?
Click to expand...

SkyBlue300 said:
What is the difference between a Dominion and a Commonwealth? Great work, @CosmicAsh
Click to expand...

A Dominion does not have control over its external affairs, and is only allowed to communicate freely with other members of the Empire without having to go through London, with the exception that if a Dominion is in a location that requires it to have constant contact with a foreign power, they are eligible to maintain an office in the British embassy of that country to engage in discussions without having to send a message to London to negotiate for them. A Commonwealth has a fully staffed external diplomatic corps, and is able to enter into treaties, ect with foreign powers and conduct negotiations without British involvement. To an extent.

Commonwealths also get more representation in the House of Delegates, and have (slightly) lower contribution rates towards Imperial management.

Just one question: why does "Great Britain" not officially exist, and is composed instead of England, Scotland, and Wales? When did this change occur?
Click to expand...

Great Britain absolutely exists, it is the United Kingdom of Great Britain, Ireland, and Hong Kong after all.


Light Jammings said:
Any reason why Jamaica has a lower population ITTL? Was there an equivalent to the Windrush generation?
Click to expand...

Jamaica was hit very badly from the Long Depression, and as such has never quite recovered. Jamaicans have in general moved to other parts of the Empire.


mymatedave10 said:
I did notice that Cantonese is the second most common language in England, I assume this has a lot to do with Hong Kong being officially part of the UK and the presumptive freedom of travel between them, also I did notice that the Commonwealths get far more seats at the House of Delegates than the Dominions.
Click to expand...

Indeed, there is free movement between all parts of the Empire, and someone living in Hong Kong can freely move to anywhere in the United Kingdom without any repercussions or needing to apply for residency, as they are already residents of the United Kingdom.

Commonwealths do have more political power than Dominions.

Did Prussia ever have colonies ITTL?

@Cosmic Ash
Where is Pitcairn Island in all of this? Excellent work, btw.

MasterSanders said:
@Cosmic Ash
Where is Pitcairn Island in all of this? Excellent work, btw.
Click to expand...

The Bounty mutiny happened in 1789, long enough after the POD to be butterflied. No mutiny = unihabited and wholly uninteresting Pitcairn.

27zipski said:
The Bounty mutiny happened in 1789, long enough after the POD to be butterflied. No mutiny = unihabited and wholly uninteresting Pitcairn.
Click to expand...

At least it’s pedophile free. Win in my book. 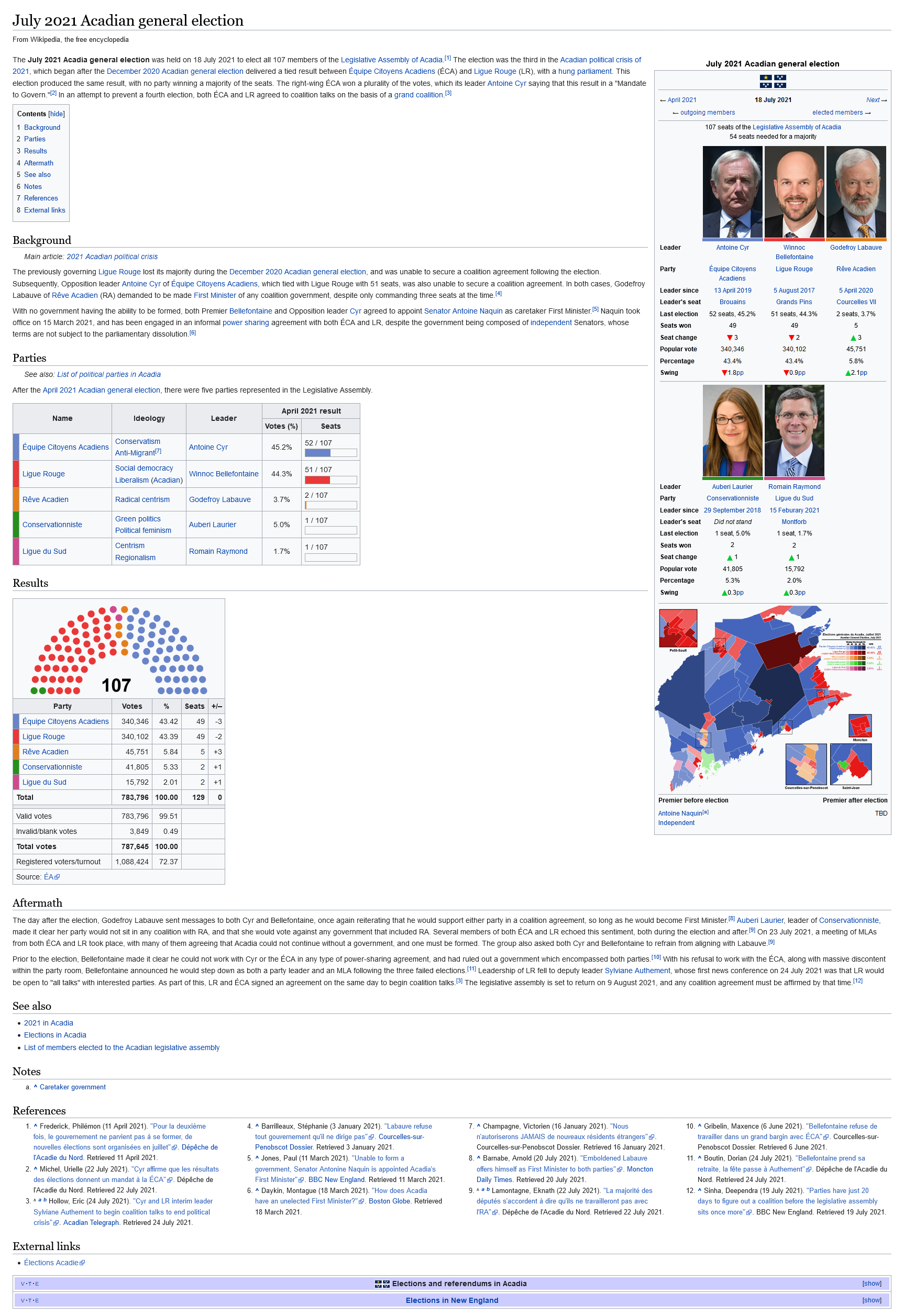 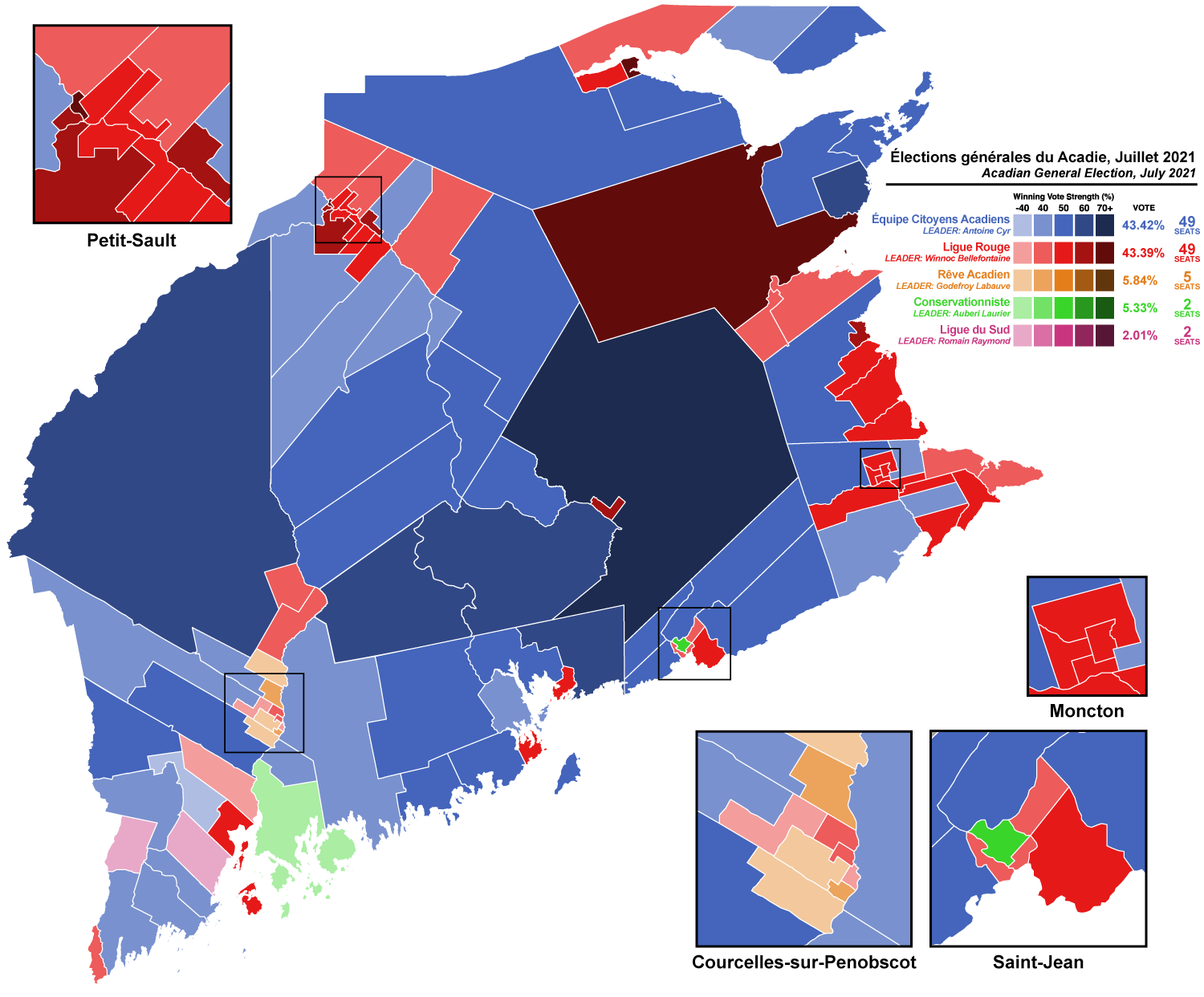 Very interesting.
Are Acadian politics typically so... fractious, or is this an exception? Apologies for my ignorance of parliamentary systems....

Additionally, beyond Carbone's bypassing of the New England Constitution, how has the country been affected by the war domestically? I'd love to see an update on the wartime situation soon...

Why is a centrist party like RA so ostracized?
What is the "southern" element of Ligue du Sud regionalism?

How has the ongoing war in the US affected local politics like the Acadian elections? I imagine Acadia is too far from the border to be a viable target and likely hasn't suffered as much as other provinces like Connecticut, Long Island, and Adirondack.