The Warring State of Libya - A Country at War

Richard Drummond said:
Thanks for the TL. It helps with perspective.
Click to expand...

Thanks, my dude. I'm glad you recommend me to make this one, I learned a lot when designing this. I'll probably write a meta-submission explaining the intricacies of the design and the contents that inspired it.

ShahAbbas1571 said:
Thanks, my dude. I'm glad you recommend me to make this one, I learned a lot when designing this. I'll probably write a meta-submission explaining the intricacies of the design and the contents that inspired it.
Click to expand...

No worries. Did you make the background, it is a very cool design.

Richard Drummond said:
No worries. Did you make the background, it is a very cool design.
Click to expand...

It's based on a photograph from Gettys Image, I just add some layers of effects and made a custom clipping mask out of it. That's a brief explanation at least, there's a lot I want to extrapolate soon.
[Map] United Nations Humanitarian Overview of the Libyan Crisis - 2026 New 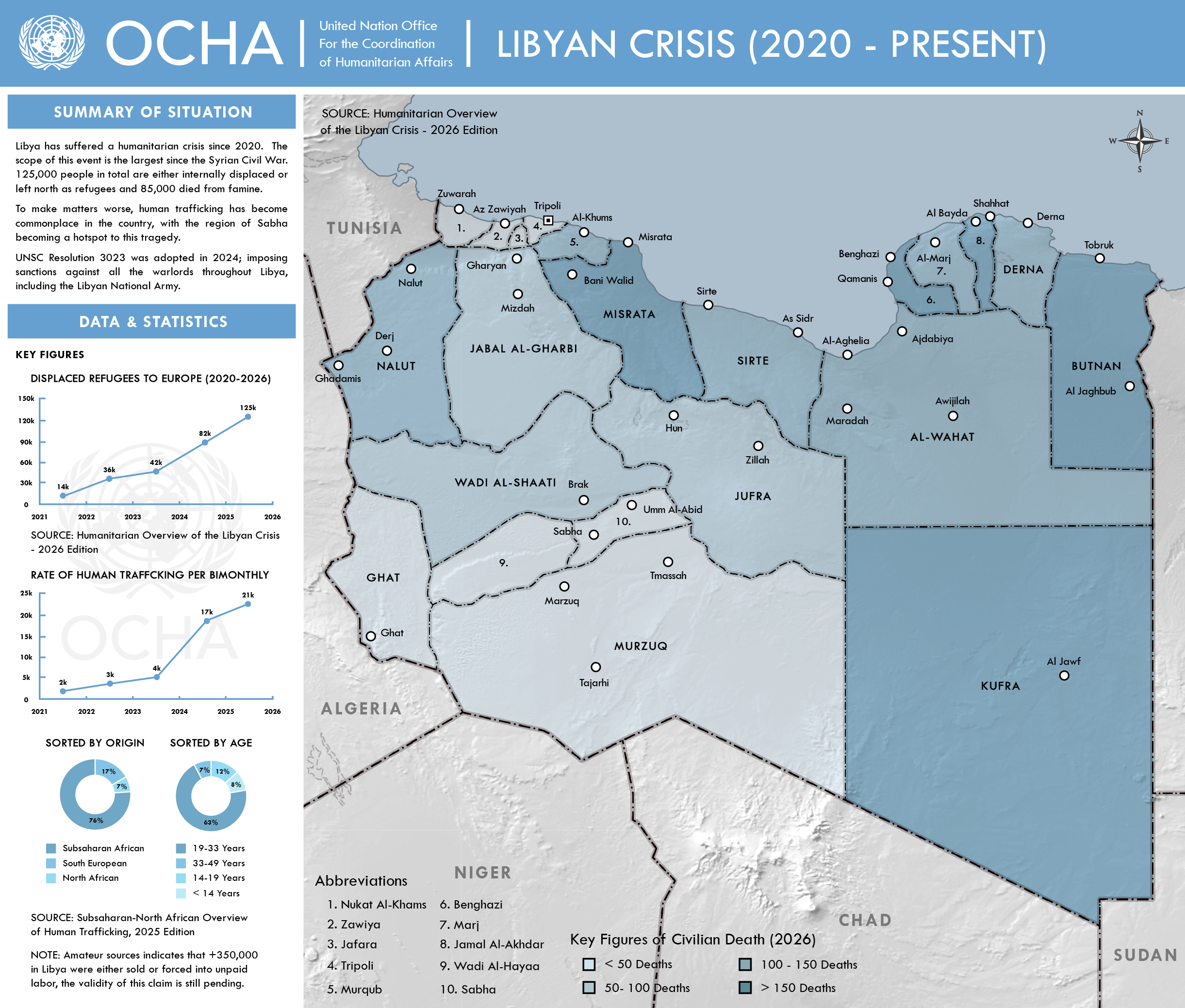 We have neglected the country for far too long. I encourage everyone to make a call for action to prevent further catastrophes.
- Johan Nygaardsvold, Oslo Commission of Rights and Liberties.​
Libya has suffered a humanitarian crisis since 2020. The death of Libyan dictator - Khalifa Haftar, has led the country embittered due to his lack of foresight and impending military bickering from powerful cliques. It’s the most disastrous catastrophe since the Syrian Civil War due to its scale and similarity. +500,000 Libyans have suffered throughout the Third Civil War, hundred upon thousands are either internally displaced, forced into human trafficking, or death from armed clashes.

While UNSC Resolution 3023 was adopted to impose sanctions against the warring faction, the results were less than desired due to the surprising will demonstrated by them and their connections to dubious markets to sustain their living and war machines. Here, the article explains the basic studies and the testimonies that follow.


2020 Libyan Migrant Crisis
​
Libya has faced a wave of migrants funneling through Europe. While most of them are originated from Sub-saharan Africa, largely from countries such as Nigeria and Liberia, Libyans are also forced to leave their homes and head north due to the worsening condition tormenting the country and its unsustainable economy.

It has risen from more than 200,000 to 3,000,000 and counting, with Libyan refugees accounting over 125,000. Data accumulated from various sources ranging from freelance journalist, former bureaucrats, and humanitarian NGOs. Others have suggested that these numbers are rather conservative and rumors from nomads throughout the Sahel Region made testimonies of a massive wave of refugees, either traveling through a convoy or by foot. While the data does present a huge margin of error, the data allocated by UNHCR is the only reliable source available in the field.

The crisis was ignited because of various factors, but the situation faced in this decade is mostly due to the destabilization of Libya and the lack of a coherent government to control the crisis, turning the country into an open but risky gateway to Europe. Attempts were planned to solve this matter, with the Presidential Council still determined in reestablishing their government again.

Paranoia and discrimination against refugees have become commonplace. The frequent rise of kidnapping and human trafficking through Southern Europe has exaggerated the already worsening xenophobia, with rumors of Libyan corsairs disguising themselves as refugees to lure wandering sailors into the fold.


Sabha Human Trafficking Crisis
​
Human trafficking has always persisted throughout the country even before the rise of Muammar Gaddafi. The scale of it was manageable enough for both him and Khalifa Haftar to crackdown the inhumane market. But ever since the rise of an enigmatic clique named the Free State of Sabha was formed, this practice has become worryingly commonplace and slowly spreading throughout the Sahel Region.

Many journalists and NGOs were reluctant to observe its regional hotspot - Fezzan, mostly due to the frequent disappearances and liquidation of their confidants. The only reliable data concerning the numbers of victims available is from the likes of Julia Kaufmann - a travel journalist meandering around the desert of Africa. Her sources claim there are more than 350,000 in Libya, 225,000 alone in the Free State of Sabha (FSA). While the validity of her claims is still pending.

Most are originated from Sub-saharan Africa, people who migrated from their homes to reach Europe. Their lack of awareness on the subject and raids organized by various parties have made them easy prey for the practice, with those traveling on foot facing little to no chance to avoid them. Despite this, many Europeans from the Mediterranean were kidnapped and sold through a vast network established by the corsairs which funnel through to Libya.

Massive efforts were made by various countries. A coalition was formed around the Mediterranean Sea to prevent suspicious ships sailing towards Libya and the Niger and Chad are attempting to curb this growing practice from spreading throughout. The efforts made were not enough however as hundreds of thousands are still stuck within the malevolent environment that forced them into unpaid labor.


Violence and Civilian Deaths
​
Interfactional violence throughout the country has cost thousands of lives, with many taking desperate and surprisingly innovative measures to avoid such onslaught. Despite the decline of civilian loss in 2026, the situation after Haftar’s death was drastic enough to cause more than 125,000 in 2020 alone.

Clashes between factions are most frequent throughout the coastal regions of Western Libya and Eastern Libya. Districts such as Jabal Al-Ghabri and Al-Marj faced massive exchange of fires, with heavy weapons and chemical weapons involved; causing hundreds of to die from the onslaught. Warlords in Eastern Libya have seen frequent use of chemical agents as both a military asset and a tool to subjugated any mass dissent. Airstrikes from the coalition have tried to destroy the program but to no avail.

According to the Libyan Commission on Human Rights (LCHR), many civilians have died from armed clashes from both sides, making over 42 percent of all causes of death. The rest of the following includes: 18 percent from bombings, 18 percent from gunshot wounds, 12 percent from chemical agents, and 10 percent from collateral damage.

Fortunately, the rates of violence have declined since 2023, with the numbers of demises have reduced to less than 5,000 deaths; both combatants and non-combatants, in 2026. But the rise of the Green Army within the region of Western Libya seems to break the status quo, with skirmishes throughout Al-Marj and Zintan threatening to break the uneasy peace.
[Map] United Nations Humanitarian Overview of the Libyan Crisis - 2026 - A Follow-up New

<--- Author's Note --->​
This is the first map where I utilize QGIS as a base for the map. I made some research on the type of style and designing when it comes to UN's infographic, they're usually technical and surprisingly monotone. Same when it comes to the color schemes, you'll mostly find maps and infographics consisting of 3-4 gradient of colors. Made a lot of research to make this feel like it was made by the United Nations themselves but I also want to modernize it to give a dynamic look.

Anyway, that's it. Hope y'all like the stuff I made here. And here's some alt-link because why not? [r/ImaginaryMaps] | [DeviantArt]
Last edited: Friday at 7:16 AM

What's the state of the EU in 2026 considering the new migrant crisis and the whole Barbary Pirates 2 electric boogaloo thing?

mate888 said:
What's the state of the EU in 2026 considering the new migrant crisis and the whole Barbary Pirates 2 electric boogaloo thing?
Click to expand...

Logistic and infrastructure-wise, they're pretty much prepared on the subject considering their experience on migrants funneling through Europe via the Mediterranean. The problem is it didn't manage to prevent further uproar from the locals living near the coast and the camps, with xenophobia becoming rampant in the process. It pushed them into aligning with rising far-right movements and supporting its officials, especially when it comes to Italy.

The crisis has made Italy's far-right movement far more popular than it could've been, with the exception of Naples and Sicily. The opposition coalition is becoming more powerful and they already chose their own electoral candidate. Poland faced the same situation as well despite being far away from the crisis. Countries like France and Spain, however, is becoming polarized, the moderates are falling apart while the radicals are getting more organized.

NATO already established the Mediterranean equivalent to Operation Ocean Shield, where they're tasked to curb down the rising tide. But ever since the incident in the South China Seas, they're become less coherent and cohesive, hampering the military operations and becoming a detriment to their performance. The organization is in a state of deep factionalism, with Pro-Washington and Pro-Paris camps threatening to break the very fabric of its cooperation.
Last edited: Friday at 11:24 PM
Threadmarks
You must log in or register to reply here.
Top
Top