The Warring State of Libya - A Country at War

Warring Libya - The West is Red Preview 2.0
<--- Q&A Contribution --->
​
I have to make this a separate post for y'all to notice, especially since I'm giving you guys the chance to contribute to this piece. So basically, I planning to make a page dedicated to a Q&A, with the person of interest being Hubert Douglas - the guy who wrote about China becoming a superpower while America is fumbling from the stairs. It'll be under the style of this piece below, where the questionnaires are set in stone so you could understand the design and context. 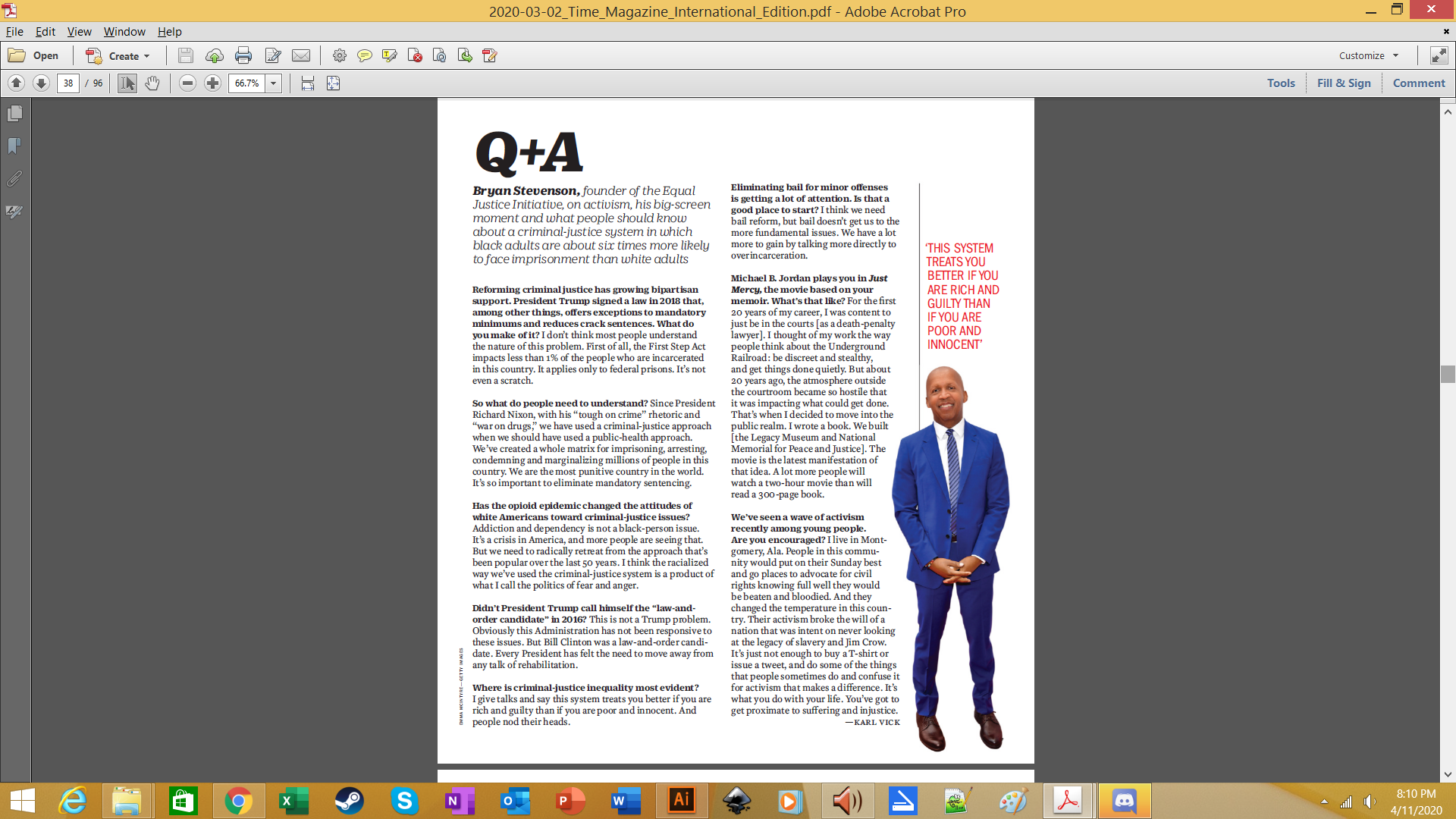 1.0: A concept example for the upcoming page.​
Anyway, here's an introduction piece to understand the character and what type of question you might want to ask. If you don't want to add anything, that's fine. I could write one myself but I thought maybe y'all could be engaged over this and might ask something interesting or even funny. I don't want you guys to feel underappreciated for reading my piece of work since the start of this project so I might as well let you guys contribute something here. 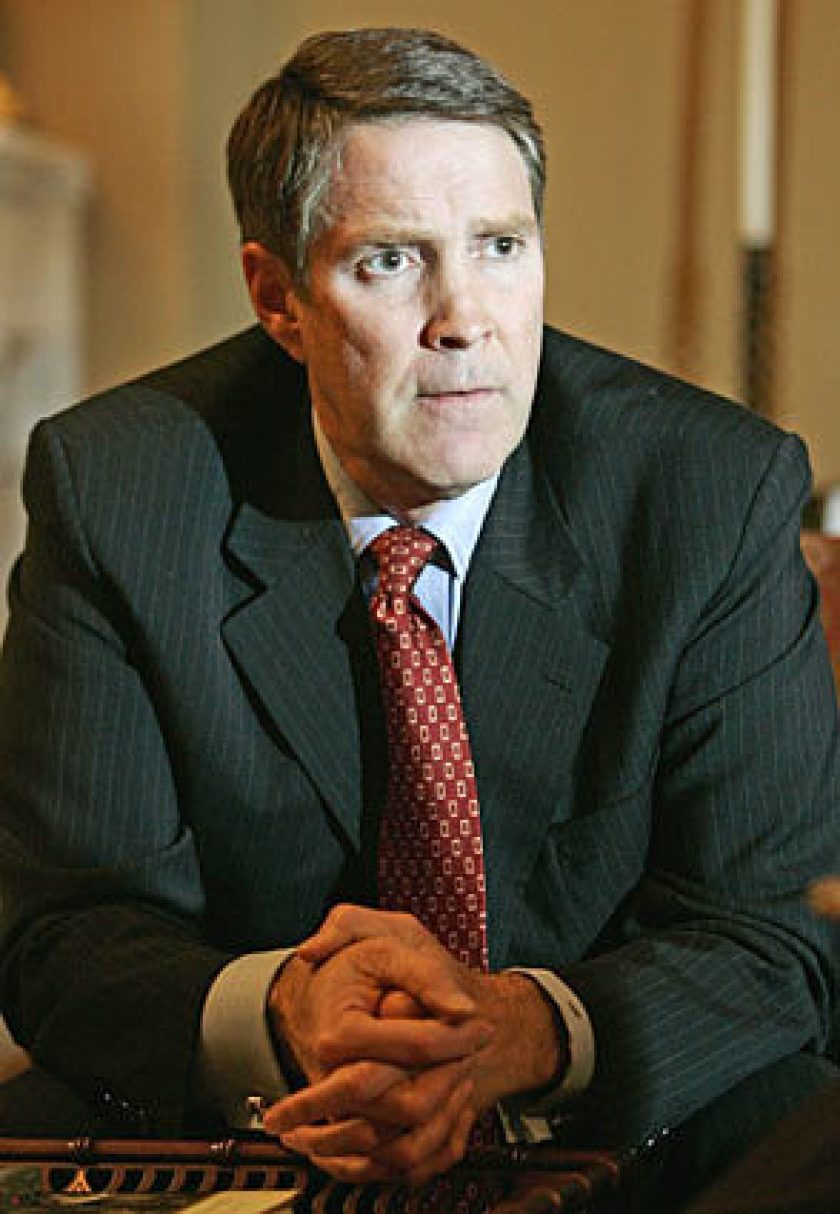 Hello, everyone. My name's Hubert G. Douglas. I'm an International Relations Analyst and Polemicist, basically someone who figures out the relations of two-or-more countries and also someone who expresses an interesting viewpoint. I was generously invited by the folks from TIMES to contribute an interesting piece so I decided to write an article based on China and how they're slowly becoming a superpower while America is not up to the challenge. Some folks claimed that I'm well-versed in rhetorics while others call me verbose and pretentious, but I mostly try to spice up my insight with simple but engaging wordplays.

Anyway, I wrote about a lot of stuff: I wrote about how Iran's geopolitical strategy and how they outsmarted the United States and Co. over the regional influence of the Middle East (From Cyrus to Khameini), a piece about the optimistic future of West Africa and the role they'll play in the future (The Jewels of the Atlantic), how neoliberal institutions failed to curb down the rising tides of the extreme spectrums of both the right and left in this current political scene (The Noble Failure of Liberalism and Humanism), and how the prospect of authoritarianism is more morally-grey than some might assume (One Man's Tyrant; Another Man's Hero). I also contributed some pieces in the Northern Front and The Mediterranean, lectured in decent institutions such as The Halls of Perspectives.

If you have any curious questions you want me to answer, just write something down below and the TIME could articulate them into this page! I hope you people have a good and healthy life. Goodbye, folks!

Well, that's it from the man for now. Remember, write the answers below and I recommend using fake names or even usernames to add some flavor to the page. Anyway, that's it from me. Goodbye, ladies and gents!
Last edited: Apr 11, 2020

Also, I set the deadline to... actually, there is no deadline. Just make sure you have the answers and names and post them below as soon as possible! I don't really have a strict schedule at this moment so I'm giving y'all a huge gap to work with.

I really like the look of this, also i watched your inkscape tutorial and it helped me a lot.

The Anglo-Dutch Union said:
I really like the look of this, also i watched your inkscape tutorial and it helped me a lot.
Click to expand...

Thanks! After I'm done with Libya, I'll continue the story with something grander.

Looking forward to it
[Meta] TIME Magazine: The West is Red - Preview 3.0 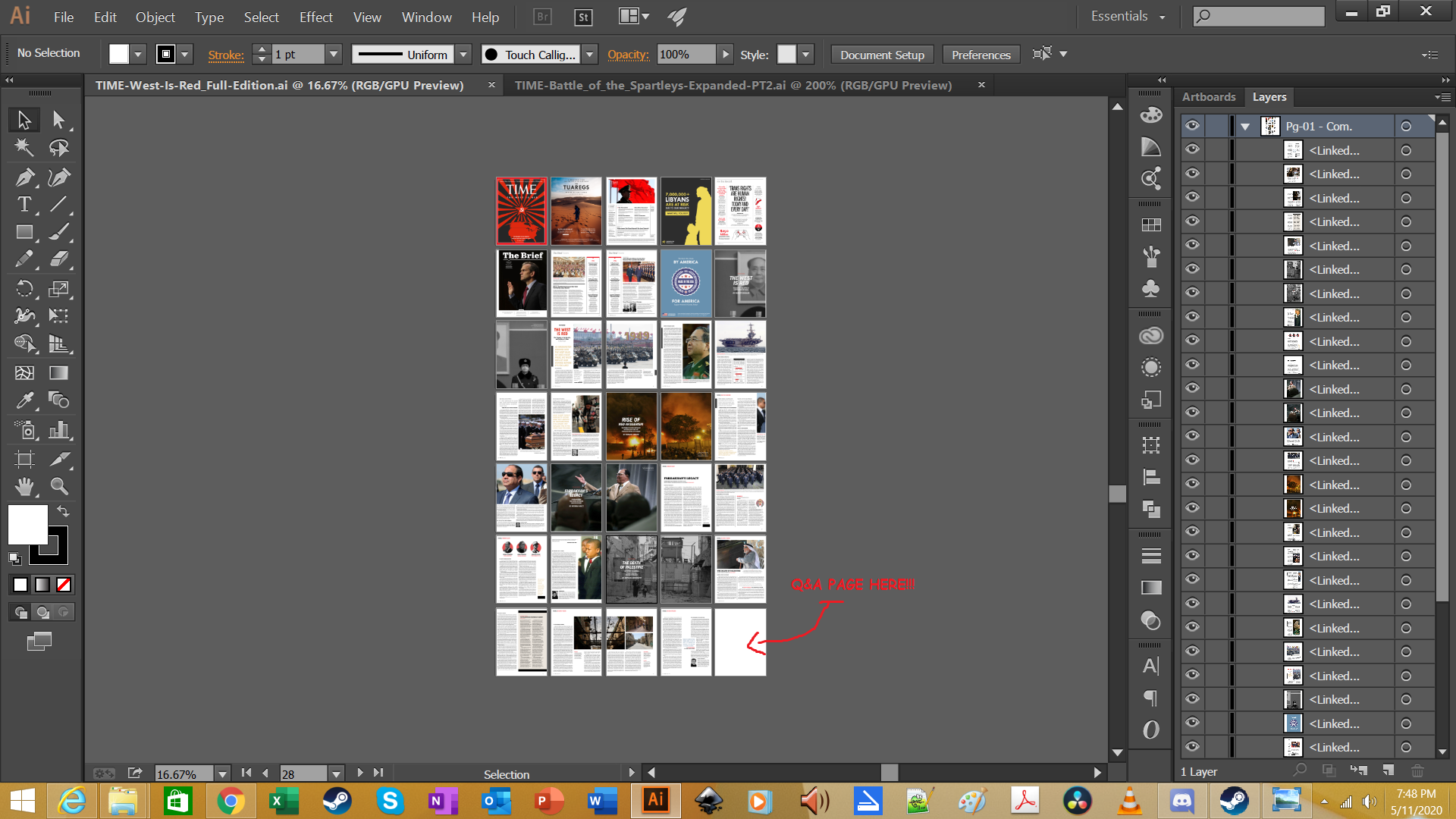 3.1: This is the entire project. Have to move the PNGs into another file to prevent lag.​
It's been a long time since my last post, wasted a lot of it slouching on the desk chair drooling over M&B2 but I managed to spend some of it well from time-to-time. Anyway, after months of delicate writing and designing, the process of making this piece is finally over... It's done. I've managed to complete 34 pages in total, plus the addition dedicated to the Q&A (I'm still waiting for your answers, btw).

It wasn't an easy process to handle actually, there were times where I thought of giving up when facing fierce difficulty. There are cases where I have to rewrite an entire page just because it doesn't with the overall design, leaving me distraught and dispassionate over the project at hand. But despite the obstacles, I've managed to overcome them in the end, and it's now ready for publication. I'll put it out this week, although I have to go through a process of proofreading and revisions before I make my final case. 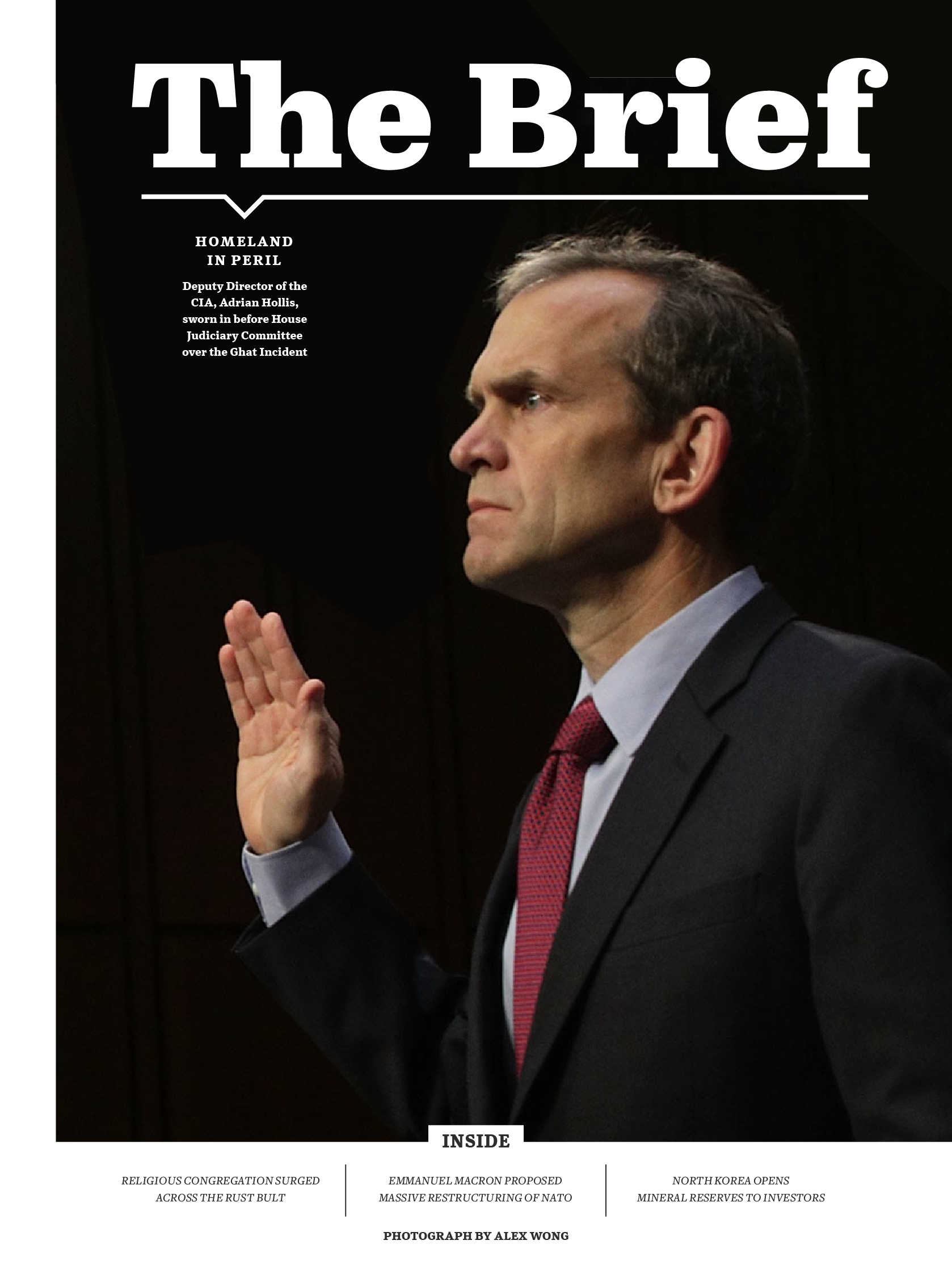 3.2: Another teaser from your's truly. Enjoy! 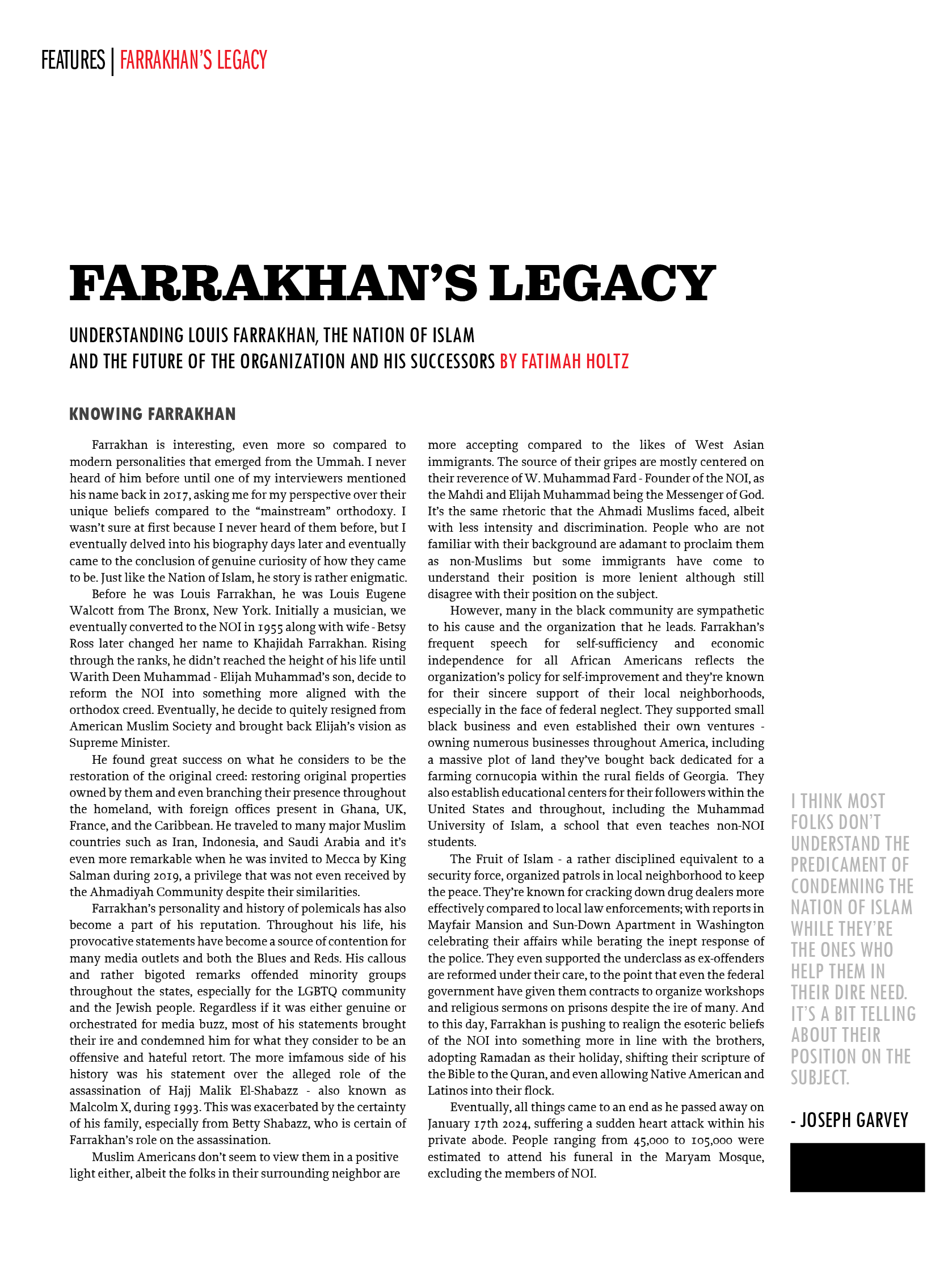 3.2: A sneak peek on the article, mostly about Farrakhan and the NOI.​
With that out of the way, I could finally explain two key writing principles for the magazine outlet: to get the context of what I'm trying to accomplish here.
Well, that's it for me. Expect the entire papers to be published within the week. I don't really have much to work with other than proofreading and making revisions. And yes, I managed to optimize the pdf from 56 MBs to 15 MBs, although the image quality is a bit tacky. I might form an Imgur gallery if the pdf doesn't work as planned. Goodbye, folks!

NOTE: Oh yeah, make sure you post your questions below for the Q&A page. If not, I'll just write my own piece.
[Media] TIME Magazine: The West is Red - Complete Edition New

NOTE: Here's the download link to the PDF: [Download Here!]​
It's finally here, fellas! I've spent an entire month just to finish this piece. I faced a lot during the past couple of days: optimism, depression, and even irritation over the process. But that's over and despite the mess have to face, it's all worth it because it's a setpiece for the entire world and beyond. As I said, it's a bible that will set the setting into a grander stage, something more ambitious after this project. It took me years to figure out the pieces until I found the confidence to make this and I'm glad it's all done because I can move on to other projects, especially for the thread. Anyway, I hope you folks truly enjoy this piece. I've tons of effort to make this as perfect as possible. Have fun!

On July 14, 2025, TIME Magazines published one of the most controversial issues in recent years. In an attempt to bring a more sensitive topic after facing negative feedback, the Editor-In-Chief - Louis Malford, commissioned four authors to write a particular subject of their choosing; offering them exposure to their profile. After it was released to public hands, the issue was met with the highest of praises and fierce condemnations. The outlet sold 5,000,000+ issues in the first following months, more than they made in a year during 2013.

One of the articles of the main coverage - The West is Red, is both lauded for being the only piece to discuss an otherwise taboo and panned for insinuating the Reagan Tragedy as the folly of the United States. Dan Schreier, National Security Analyst and President McCallum's former Secretary of Defense, praised Hubert Douglas for bringing such topic to the public eye, especially over Washington's lack of a meaningful response to China's rapid expansion and policy change. His last prose over America's lack of a coherent response was an impressive piece to him, referring it as a "Stroke of genius against the lazy middlemen in the White House..." However, others condemned this column, calling it a provocative piece that disrespects the victims and for implying that it was the fault of the United States foreign policy. Other such as Michael Aronowitz also faced similar reactions, with praises and condemnations over the subject matter of Hebron, and even faced threats of having his citizenship stripped by the Knesset.
Last edited: Monday at 1:19 AM

The file needs authorization to be downloaded, could you solve that?

Thanks, my dude! Glad you're appreciate the world I'm writing about.
[META] TIME Magazine: The West is Red - Complete Edition - A Follow-Up New

TIME Magazine: The West Is Red - Complete Edition
A Follow-Up​
I noticed that the PDF download link doesn't work as intend. I'm so sorry about this disaster. I didn't realize this problem until I checked through my email, clogged by permission requests. Fortunately, El_Presidente mentioned this problem to me, although I was not aware of his post until now.

If the problem persists, please hit the DM. Sometimes I'm a bit scatterbrained when it comes to managing complex publications.
Last edited: Thursday at 3:17 PM

El_Presidente said:
The file needs authorization to be downloaded, could you solve that?
Click to expand...

If you still face the same problem, just holler me at the DMs. I'll try my best to help!

Who’s the Prime Minister of Israel?

If you still face the same problem, just holler me at the DMs. I'll try my best to help!
Click to expand...

It works now, thanks!

I will rather be vague on that subject since I don't want to rely too much on figures from RL.
Threadmarks
You must log in or register to reply here.
Top
Top