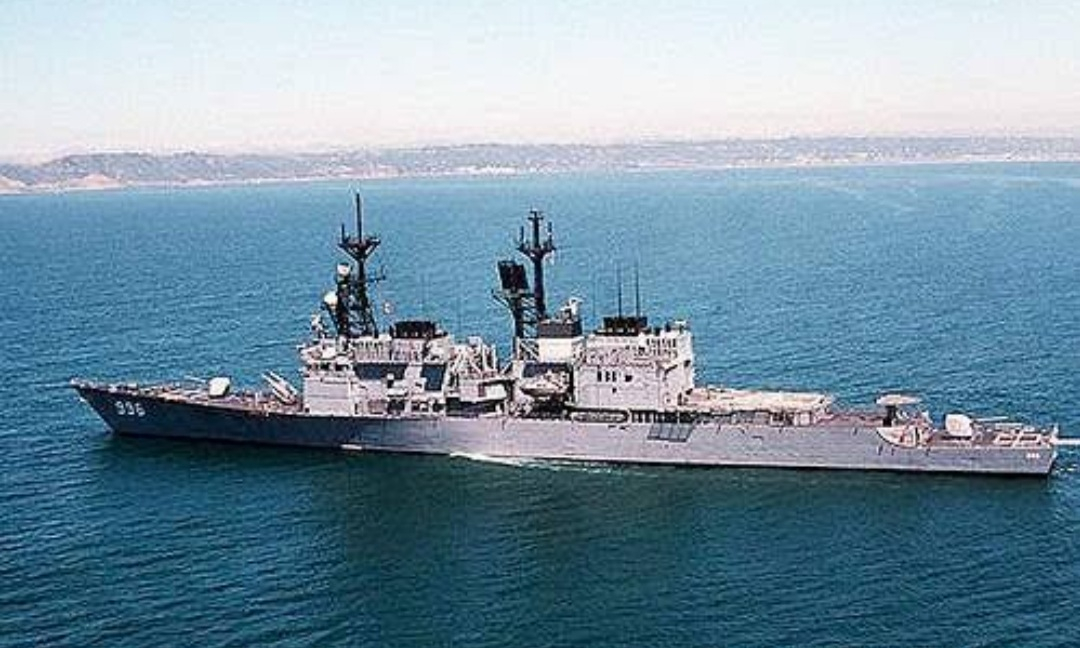 A russian republic navy kidd class destroyer (renamed the yumashev class destroyer after the naval officer that defected), 2010. The russian navy although not that big is considered to be one of the most professional and well trained in the region rivalling the jsdf navy and the korean navy and recently the navy sought to modernize its fleet by upgrading submarine fleet and aqcuiring bew ice breaker to patrol the north pole border with the soviet 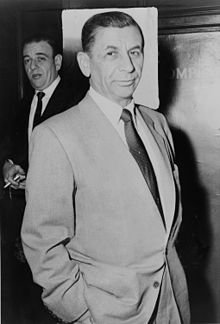 Jewish American gangster Meyer Lansky outside his Brooklyn office, 1958. The stories of Jewish mobsters in the US were widely printed in the Nazi press during the 1940s and 1950s to create a link between 'internationalist Jewry' and 'the corrupting influence of organized crime.' Meyer was somewhat indifferent to the plight of his fellow Jews in Europe, something that earned him the enmity of both native born American Jews and Jewish refugees. This cold attitude motived a Jewish refugee from the Netherlands by the name of Arend Holtkempt to join his gang as an FBI informant. Holtkempt's information helped bring down Lansky's empire by 1959 by leaking information about interstate bookmaking operations and drug deals.

A Hitler Youth member executing a suspected spy at a train station in Kiel during the German Civil War, 1959. During the Reich's final years, Hitler Youth cells took over buildings to use as ad hoc bases. Any unauthorized civilians found near these locations were assumed to be infiltrators and either beaten or simply shot outright.
Last edited: Nov 17, 2021 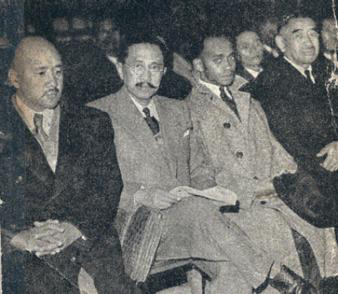 A delegation of Malagasy leaders in Pretoria for a meeting with British and South African statesmen, 1952. British administration of Madagascar was a source of major frustration among the population, something that London was fully aware but reluctant to fully address. The island was of a great strategic importance to the Toronto Accord's efforts in the Indian Ocean. However, the yearning for independence from European rule only grew once Madagascar was released from French control and fell into Britain's sphere of influence. By the early 1950s, the Toronto Accord felt little recourse but to engage with the Malagasy on the topic of Madagascar's independence. The situation worried many Europeans in the southern part of the continent, who felt uncomfortable seeing native Africans engaged in high level discussions with the heads of Western powers.

IJA guards overseeing Korean and Chinese prisoners at Gunkanjima (Battleship Island), 1944. The island served as a factory fueled by slave labor throughout the Pacific War. It fell to the Allies in mid 1945, with the Japanese losing control to a prisoner uprising supported by USMC Raiders.
Last edited: Nov 17, 2021 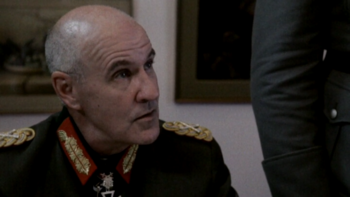 Marshal Erwin Rommel at the Eagle's Nest to meet with Hitler, 1946. Rommel was tasked with fortifying the western borders of Germany's new empire, working closely with Organization Todt to construct the Atlantic Wall. Despite his pride in the fortifications network, the threat of Toronto Accord special forces constantly worried him. "Special warfare units" were constantly mentioned in his threat assessments to Berlin, specifically the British SAS, American OSS and the remnants of the French Foreign Legion. In spite of his popularity with the German public, Rommel was bogged down in constant power games with the SS as the German Civil War increased in intensity. 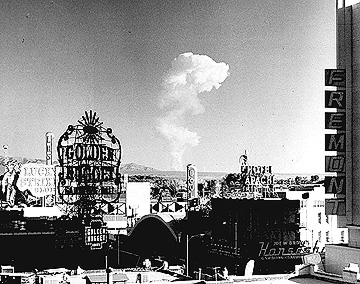 A mushroom cloud overlooking the skyline of Las Vegas, 1955. The 'casino city' was close to a test range where nuclear weapons were being tested. Vegas's very existence was lambasted in Nazi propaganda, displayed as a sign of moral corruption and decadence. The influence of the Jewish gangster Bugsy Siegel in the building of Las Vegas was also frequently mentioned.

DrDerp said:
Asia is largely more democratic than in our own timeline. The ROC won the Chinese Civil War and began to democratize beginning in the mid 1970s although Chiang Kai Shek instituted a massive purge of suspected communists before retiring. Korea is unified under a democratic government as well, before that it was ruled as a dictatorship by Syngman Rhee. As for the Philippines, I'm not quite sure.
Click to expand...

How about our country taking off as the premiers of the economic miracle or as a part of Asian Tigers? 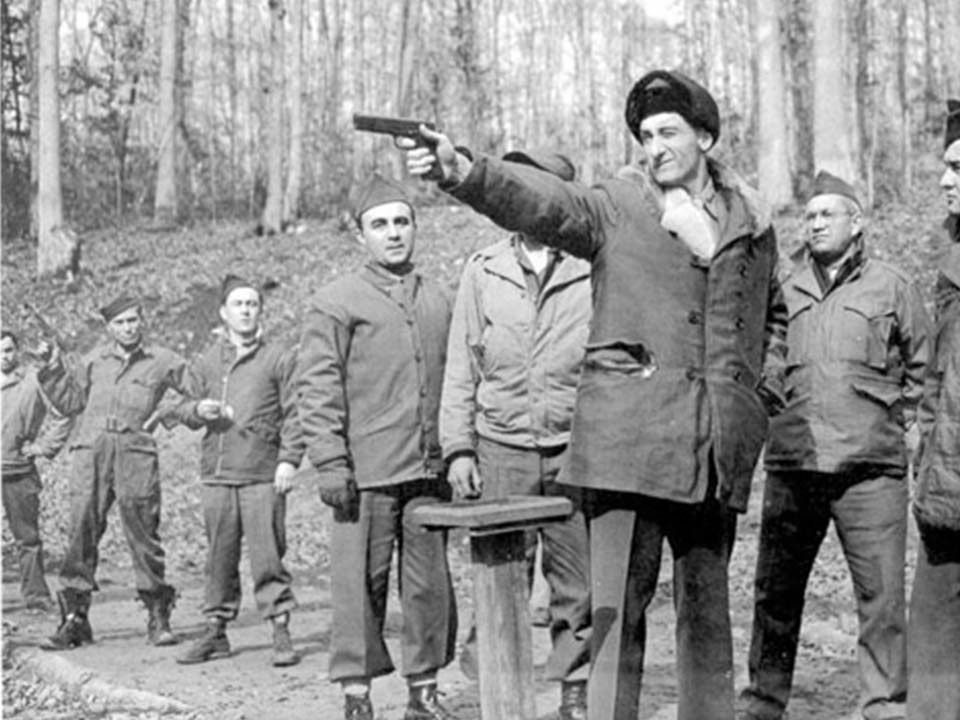 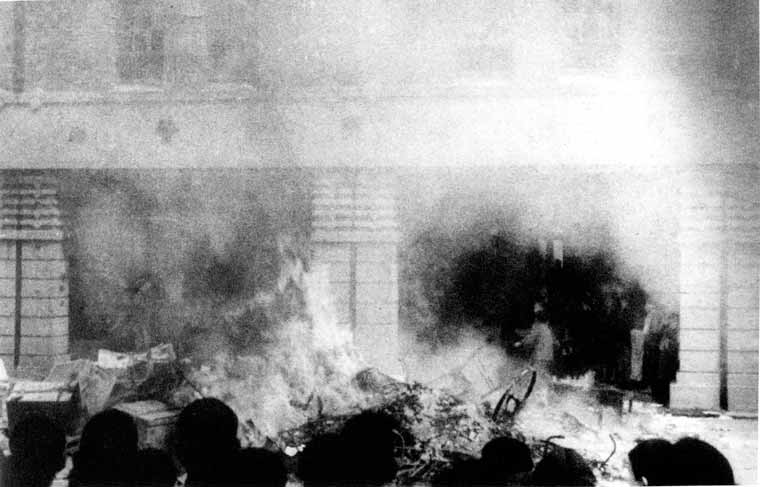 Rioters in Taiwan burning a police station in response to abusive behavior by the newly installed Kuomintang authorities, 1948. The island's economy almost collapsed as the result of mismanagement, with many previously Japanese owned industries being passed into the hands of Chiang's cronies who discriminated against native Taiwanese. ROCA soldiers also acted poorly towards the locals, with many complaints of public drunkenness, violent behavior and sexual harassment of local women. It took half a year to put down the uprising, but Chiang ensured that the next officials sent to govern the island were on a shorter leash. 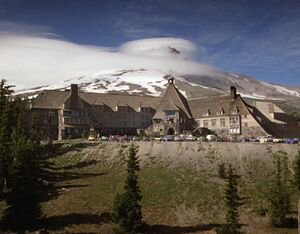 The Timberline Lodge in the mountains of Oregon. The hotel played host to a meeting between President Macarthur and other leaders of the Toronto Accord in the winter of 1954 to discuss the possible inclusion of Cuba into the alliance following the fall of the Batista regime.
Last edited: Nov 23, 2021 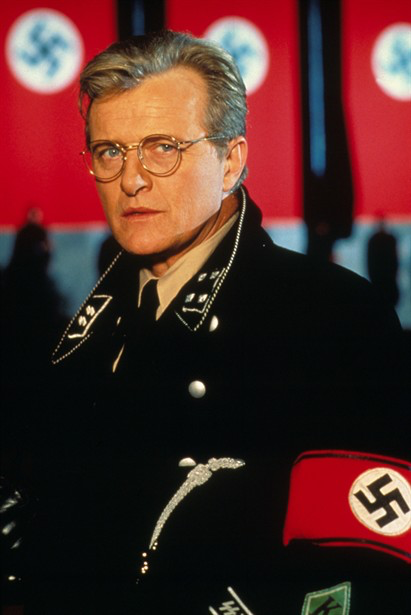 Kripo officer and SS Sturmbanfuhrer Xavier March during the 1958 Fuhrertag. March was a detective in the Berlin Kripo during the events of Operation Flood and its aftermath, working to ensure the safety of Berlin's residents alongside his fellow officer Rudi Jaeger. Examination of his Gestapo file by the occupying authorities cleared him of any suspicion, as his SS rank was an honorary one and he was already being investigated for his lack of enthusiasm toward the regime. In the years following the fall of the Reich, March helped root out multiple criminal networks in Berlin with connections to the previous regime. He held the position of Berlin's chief of police from 1974 to 1994. 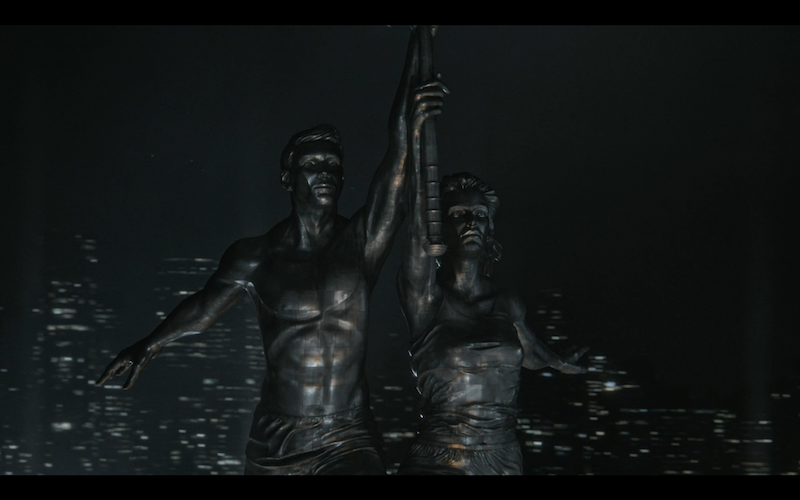 The 'Builders of the Fatherland' monument in Berlin, 1953. The statue was considered the greatest work of professor Josef Thorak, who oversaw its construction from 1947-1948. It was meant to symbolize the glory of the German laborer. Though rumors are unconfirmed, it is believed that Thorak drew inspiration from Soviet statues. The statue was torn down following Operation Flood. 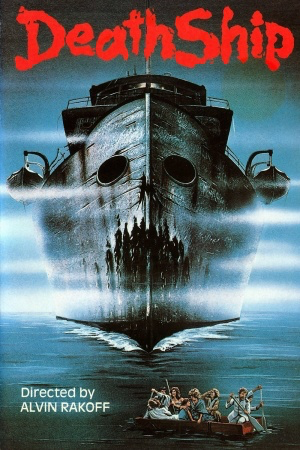 A poster for the 1980 horror film 'Death Ship'. A joint British-Canadian production, the film centered around the survivors of a shipwreck who come across a derelict freighter revealed to be a former Nazi prison ship. Over the course of the film the survivors must not only evade the ghosts of the guards, but their captain who has become possessed by the warden's spirit. The ship itself is semi sentient, prowling the Atlantic for ships to attack. The film, while not quite fitting into the 'Nazisploitation' genre, was still heavily criticized by survivors of the Third Reich's state terror. 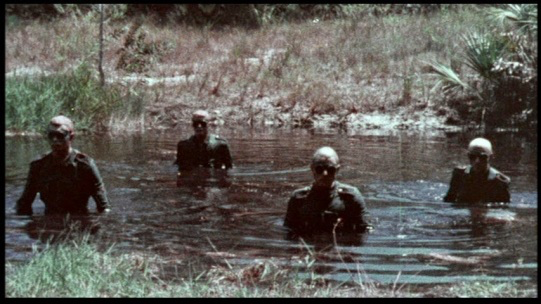 A still from the 1977 horror movie, 'Shock Waves.' The movie is one of the most well known of the 'Nazisploitation' films of the 1970s-1990s due its villains being zombified members of the Waffen SS who menace shipwrecked tourists on a remote island. The film was banned from theaters in Zapadoslava, Germany and Norway. Former Dachau survivor Egon Stolz wrote a letter to the director expressing his disappointment int he movie, insisting that the Waffen SS were monstrous enough without possessing any supernatural elements. It has achieved cult film status largely through word of mouth until the mid 1990s when it was first mentioned on horror forums.
Last edited: Dec 7, 2021

DrDerp said:
View attachment 686938
Luftwaffe lieutenant Ingrid Fromm at her post in the Netherlands before her defection to Britain, 1955. Despite having been a loyal supporter of the Reich since her childhood, her faith in the regime was undermined by the actions of both German forces and Dutch collaborators. On April 19th, 1955, she stole a small transport plane and landed in the district of Folkestone and Hythe in Kent. She was brought before the Joint Intelligence Bureau after being taken into the custody of local police and lived out the remainder of her life in the United Kingdom.
Click to expand...

Where is the original pic from?

German workers marching through the Brandenburg Gate, carrying the black-red-golden flag of the late Weimar Republic.

Two Panther III, taken over by the revolutinares. 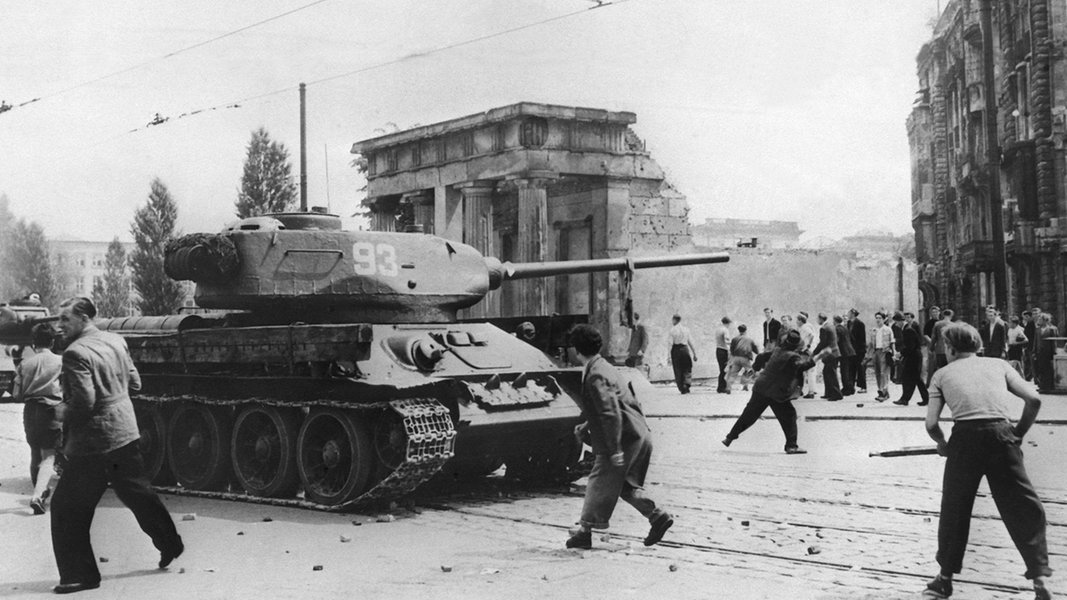 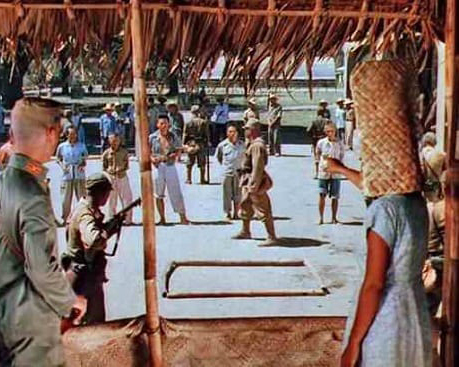 A Filipino collaborator identifying a resistance fighter during a counterinsurgency operation in Luzon, 1943. These collaborators, known as 'Makapili' were imprisoned or killed en masse following the liberation of the Philippines. 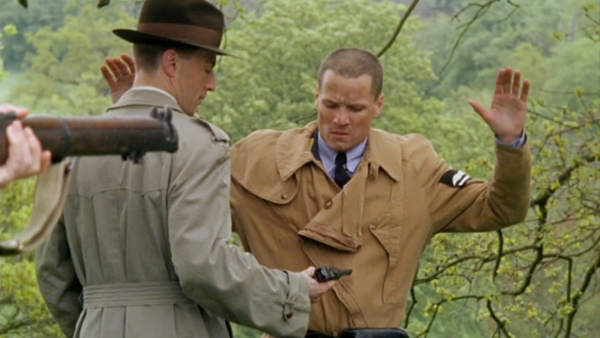 A detective in Canterbury with the captured pilot of a Luftwaffe spy plane that crashed in Southeast England, 1956. Through his pro-western attidute and the Austrian compromise, Adenauer managed to win the trust of the TA-powers. He also exploited the "Red Scare" of US-president MacArthur after the reannexatinon of Belarus and the Ukraine through the USSR and the red takeover in Japan, to get favorable terms in the questions of the polish border, the reparation and the rearment.

Although Germany became a stable democracy and the "German Economic Miracle" helped to pull Europe out of the Nazi-malaise, many Europeans had bitter feelings about the soft treatment of Germany. That the Germans already in the early 1960th produced own modern weapons like the Leopard MBT for their Bundeswehr, seemed to show, that the german hegemony had not ended. 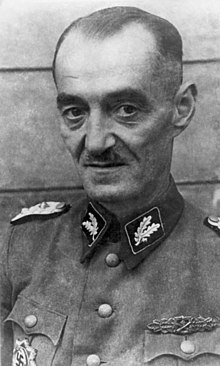 SS Oberfuhrer Oskar Dirlewanger at the 1945 Siegtag in Berlin. The commander of the Waffen SS 36th Grenadier Division terrorized Eastern Europe during and after the German-Soviet War, with his unit being seen by civilians as little more than rabid dogs in uniform. Its soldiers were drawn from prisons across Germany, men convicted of crimes from burglary and poaching to rape and arson. The 36th was repeatedly decimated during the German Civil War, seeing combat against the regular German military and pro democracy forces. Dirlewanger himself was killed by a rebel cell in Munich, sniped by an insurgent hiding in a warehouse. 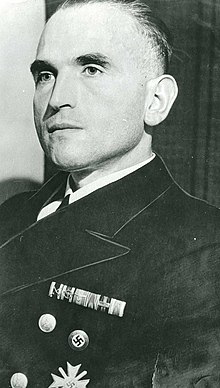 Obergruppenfuhrer Werner Best photographed in his Copenhagen office, 1946. Best took control over occupied Denmark after repeated embarrassments by Danish Nazi Party leader Frits Clausen that resulted in Frits being removed from power. He enacted numerous policies that Clausen was reluctant to implement such as the enlargement of Danish SS units and the used of forced labor to constructed defenses against Toronto Accord forces along Denmark's western coast. Despite being somewhat successful, the Danish resistance was never quelled. 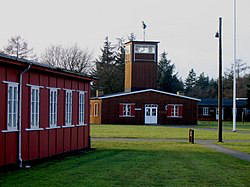 The main guard tower and barracks of the Froslev Prison Camp. Created in 1944, the camp was the result of a compromise between Danish collaborators and the German occupation authorities which stipulated that anti-German Danes would not be deported to the Reich. For just under seventeen years, the camp held suspected resistance members, Communists and other opponents of the collaborator government.

General Friedrich Paulus before the fall of Stalingrad, 1943. The victory at Stalingrad earned him the rank of marshal, with Hitler personally awarding him his baton during a ceremony in Berlin. Every soldier of the 6th Army was decorated with the Stalingrad Victory Medal.
You must log in or register to reply here.
Top
Share:
Share
Top