President Taft was concern after another conflict in the Middle East broke out
The US deployed forces to Kurdistan to prevent a Turkish- Kurdish Conflict. Note border changes on map 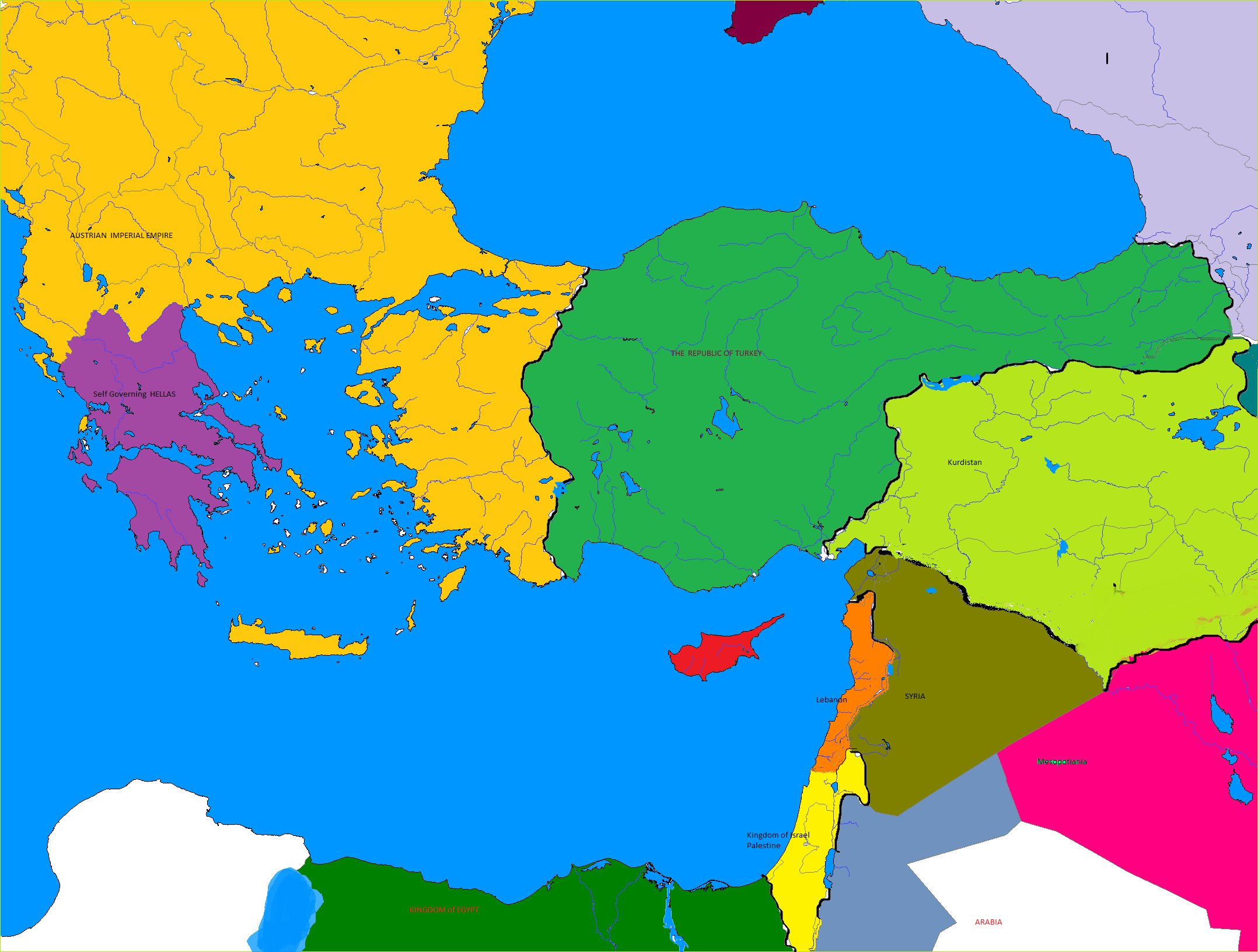 The Taft Administration approved the sale of 108 M-4A3E8 surplus tanks to the government of Kurdistan along with 28 P-47 fighter bombers. 6 C-46 and 6 C-47 transports, 24 Military trucks,24 jeeps and 18 105mm Howitzers. The US Military increased its military training Mission to the country to 300 US Army and Air Force personnel.

The USAF was training the Kurdish Air Force on operating the equipment and maintaining it. The first 12 Kurdish pilots had graduated from the American Military flight schools and the second class was starting. Already a third class of 30 was being screened. The Americans had set up several radar installations in Kurdistan so as to track invaders. It was recommended that 40 40mm aa guns be sold and 24 M-43 40mm AA tanks. It was also recommend that 18 of the new 90mm AA guns be provided

The Democrats were now voting against the Presidents proposal to sell military equipment to the Kurd's. Unfortunately for them the Nationalist- Republican Alliance in the Senate and House continued to support the President. The US had replaced the M=4 Sherman with the newer M-26 Pershing and son replaced it with the upgraded M-46 Patton I tank.

In the Middle East the region was seeing hostilities as Turkish forces clashed with the Kurdish Border forces. The Kurdish Ambassador to the Commonwealth of Nations filed a complaint. Turkish fighters fired upon a USAF Recon aircraft.

The US Sixth Fleet now began to move into the Eastern Med. The USS Coral Sea, a Midway class Fleet carrier led a show of Force which included the USS Iowa, Heavy cruiser USS Baltimore, Light Cruisers USS Springfield, USS Worcester and USS Atlanta and 6 Destroyers and attached was an amphibious Task Force capable of landing a reinforced Marine Expeditionary Force of 3,200 Marines. The Air Force deployed 25 P-61 fighters and 25 F-51 Fighters to Kurdistan along with the 187th Airborne RCT. President Taft had approved the action and was consulting with the Joint Chiefs of Staff. The President authorized the briefing of both Presidential candidates.

The United States deliverer a warning to the Republic that if they didn't stop what they were doing the US would take action. The President agreed with the Joint chief and the Secretary of Defense to take further steps The 82nd Airbornde. 24 Mechanized Infantry and 1st Cavalry Divisions were placed on alert and the 12th Bombardment Group ( B-29s moved from the US to Ireland).

The 24th Infantry Division and the 1st Cavalry Division left the east coast of the US bound for Kurdistan. The 82nd Airborne had already arrived in country by air. US Marines had landed to secure the port from a possible Turkish attack joining a Kurdish force of about a Brigade in strength. The US delivered a final warning not to violate the border. When Turkish forces closed the border they were brought under fire by US and Kurdish artillery. US Carrier planes attacked Turkish irregular forces and the Iowa moved closer to the coast to provide gun support. The Commonwealth of Nations condemned the attempted invasion of Kurdistan and called for a cease fire.

The Turkish President had suspended the Constitution and order the Turkish Army and Air Force to engage the Kurds and their US Allie. Turkey's German built planes moved to engaged the American made planes The 2nd Midway Class Carrier the USS John Pershing arrived and joined the USS Coral Sea 's Air groups. The 2nd Bombardment Group Struck Turkey Hitting Railroad yards and fuel depots. President Taft ordered more forces to the Middle East. Turkish MTB attempted to torpedo a US destroyer.

Britain Deployed a Highland Brigade to Cyprus and a Armored Brigade from the 7th Armored Division to Kurdistan. A British Mechanized Brigade was to follow> The Autonomous Greek Providence of the Austrian Empire sent enough trained troops to Cyprus where they would be equipped by the US government with uniforms, weapons and equipment to form the First Hellas Infantry Brigade.

May 1952 The Us reinforcements had arrived as well as the British, First Hellas Infantry Brigade, Brazilian Expeditionary Force with the Portugese Mtn Battalion attached and the 8th Chinese Infantry Brigade (US equipped). The Durch abd Belgians were considering deploying a small force. Austria had reinforced its forces in Asia Minor.

Seven Russian Divisions attacked Eastern Turkey causing considerable damage to Turkish forces there. The Turkish Military demanded forces be move to deal with the Russians. The Turkish President only released 2 divisions from the reserves . When the situtation continued to go from bad to critical the Turkish Military staged a coup. It arrested the President and a Turkish General was appointed as the new President. The Turkish Ambassador to the Commonwealth of Nations announced that Turkey would cease all hostile actions against Kurdistan,

With word that the Turkish Army had pulled back from the Border General Mathew Ridgeway ordered a cease fire. Allied fighters kept on alert but with the exception of some irregulars who were supporters of the former Turkish President everything was quiet. First Lt Audie Murphy leading a platoon from one of the 36th Infntry Division's Battalion got into a firefight with some 70 Turkish irregulars. He personally lead a rescue mission to recover 5 wounded Texans and was credited with destroying a Turkish armored vehicle and killing 12 enemy soldiers.

Prime Minister Sean Michael O'Rouke wanted to open talks with the Kingdom of Hawaii regarding its bases in Ireland and their use. Ireland also wanted an increase in compensation for the use of the bases. This was a result of the bases being used by the US with the permission of the Irish Government.
Ireland would receive two frigates and 12x F-51 fighters from Hawaii and the US would supply 3 Neptune ASW aircraft from the US
Last edited: Dec 4, 2019

Will there be permanent international (US, UK or French) bases in Kurdistan to keep peace at the border with Turkey?

The United States signed an agreement with Kurdistan which would allow the US base rights in the country. It would set up a major air base, Joint US-Kurdistan Army Base and a US Naval base. the agreement would allow the base to be used by the US and other friendly powers, The primary purpose would be to maintain the peace and security of Kurdistan. The New Turkish Government agreed to setting up an Armistice Commission which would meet on a monthly bases to resolve peacefully disputes

In a meeting at the Commonwealth of Nations the following parties met to adjust the Turkish border with the nations of Kurdistan and the Austrian Empire: Austrian Empire, British Empire, United States, Kingdom of Hawaii. the borders were finally settled once and for all with the British Austrian and United States guaranteeing them. Turkey signed the agreement and a referendum was held and the people approved the Treaty with 80 Percent approval rate. 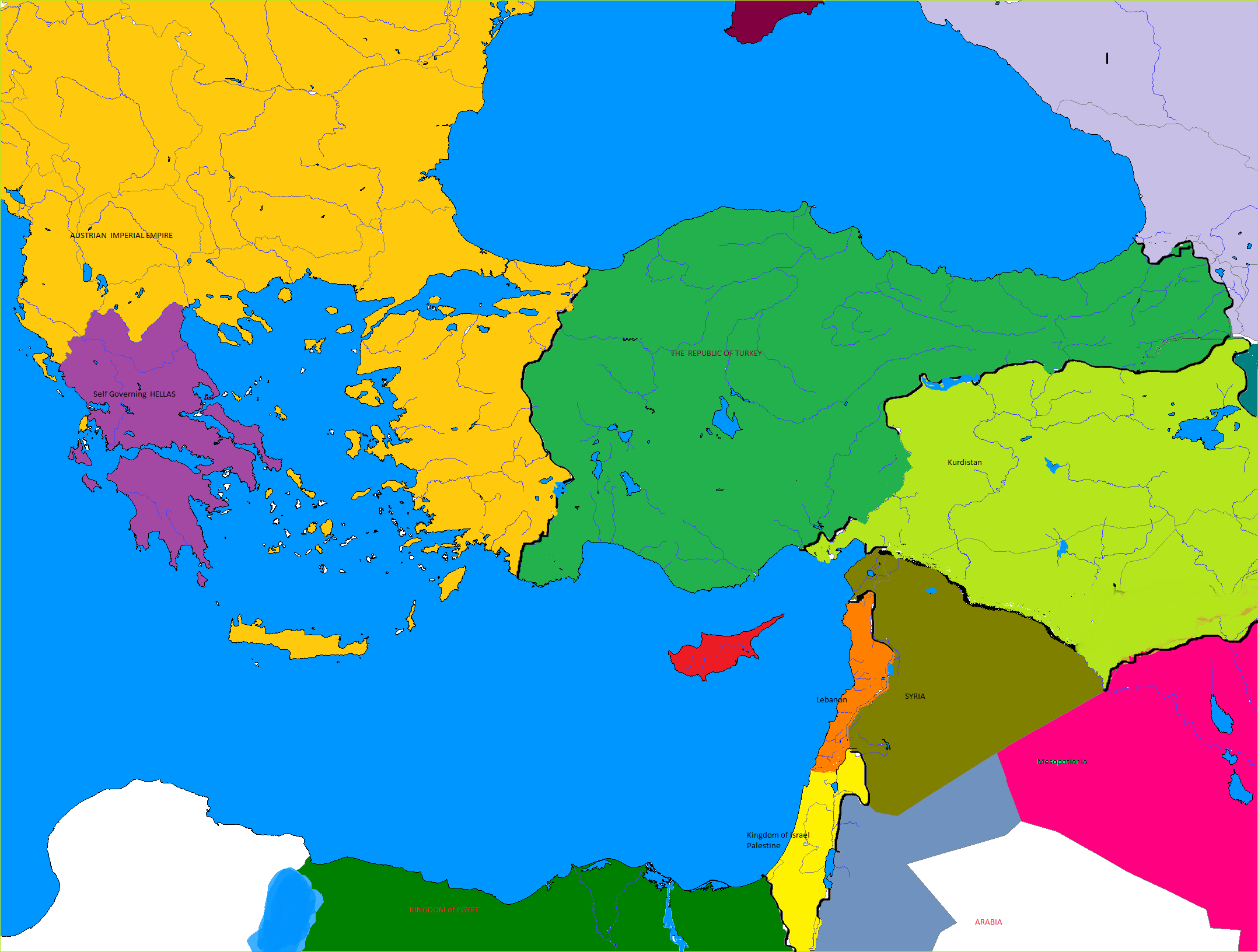 Sir Winston Churchill had returned to the Prime Ministers office in October 1951 after the Labor Party had swept to office in 1945.. He began talks with the Belgians and Dutch regarding trade and security and followed it up with a meeting with Kaiser Otto I. In 1952 he flew to the United States and had a conversation with President Taft and President Elect Eisenhower. He also was able to talk with Prime Minister McNamara of Hawaii. He returned to London and met with the Canadian Prime Minister