The Fall had had an enormous impact on Europe. The British Government made an all out effort to remove the entire population of the British Isles to India or South Africa or Australia. On the Mainland of Europe the Dutch decided that they would also need to move their population to somewhere else. In their case their options were limited to its colony in either South America or to the Netherlands East Indies. They had also sought permission from the British government to allow their people to settle in South Africa.
France had suffered an impact which had altered the geography of France. It was now possible to sail from the English Channel to Paris. Most of the French population had moved to the south of France and to North Africa. The French Army was busy conquering North Africa to ensure that it was safe for the French people to settle. They were also receiving refugees from the Balkans, who were fleeing the advancing German and Austrian Armies.
The German and Austrian Empires had combined their affords and had by 1878 pushed all the way to the Med. They had pushed the Turks out of Europe and had in 1878 launched an invasion of the Holy lands.

By 1878 the German and Austrian Empires had moved their population southward. In Germany's case only outpost were left in what had been Germany. It appeared that the Germanization of the new Austro-German Empire was taking place. A second war started in 1880 between the Ottoman Empire and the Austro German Empire as the two Empires clashed for control of Asia Minor and the Holy lands. It was a war for resources and living space. But it was not a war of extermination. The French were changing the face of North Africa as lakes that had existed millions of years ago reappeared. French engineers were determined to alter things.
Meanwhile in Scandinavia the Norweigan and Swedish populations huddled in the southern most part of both counties and the Finns did the same.
Unbenosted to the British Government there still were people in the British Isles and Ireland. There would be no contact with the British Government for decades.

To the East Russia had also suffered from the Fall its surviving population had moved southward and in some cases eastward. There were border clashes between the Russian Imperial forces and its neighbor.

Large parts of Europe were considered to be uninhabited. There were patrols by the French Foreign Legion and and French Alpine Units in the parts of France that had been evacuated. The Germans maintain some outpost in the evacuated German states but the population with the exception of Southern Bavaria had been moved southward. 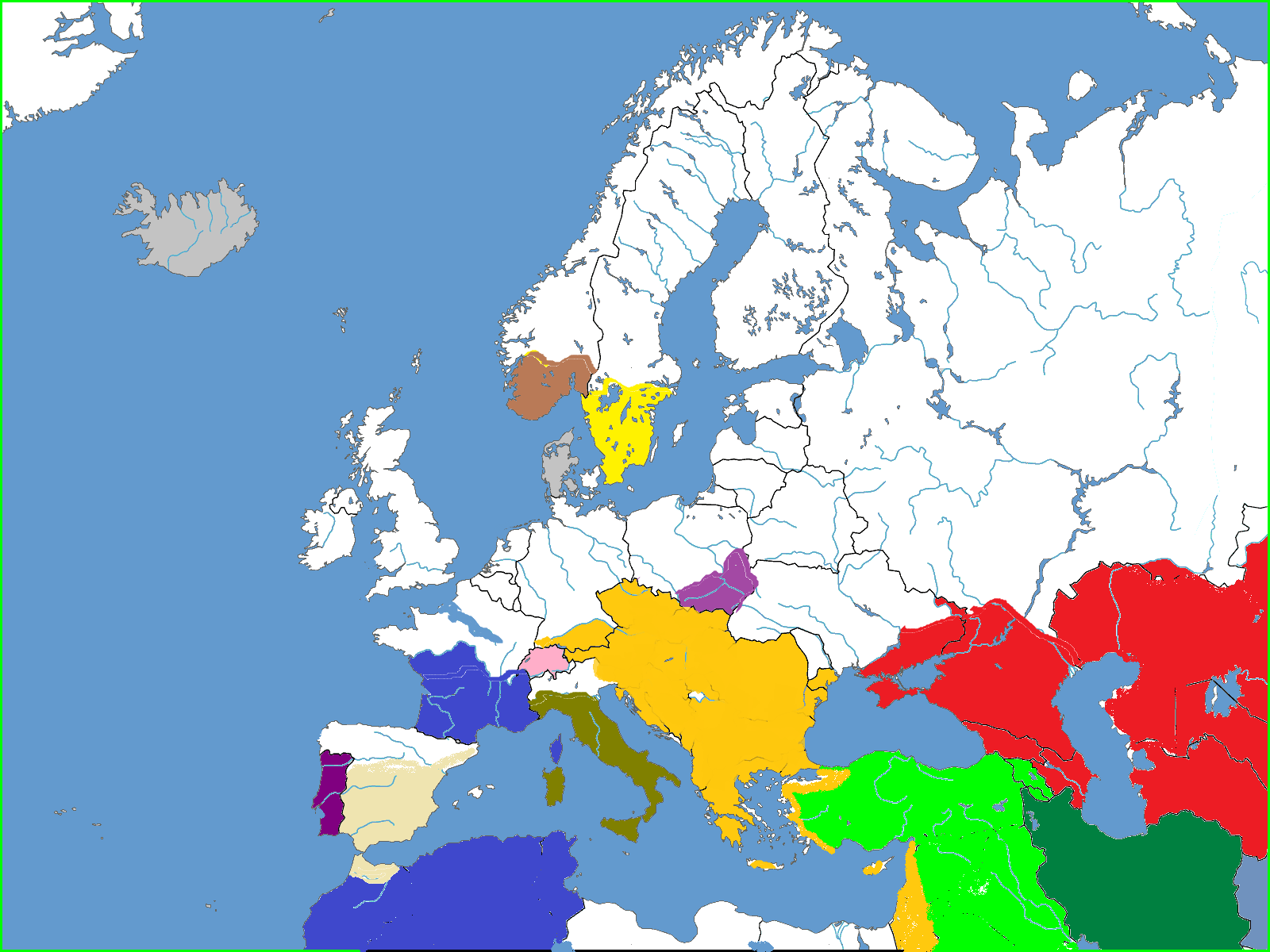 No one was exactly sure of the population of the Baltic region or of Finland> it turned out that the Volcano on Iceland helped to keep the island warm enough to thwart the freezing weather that came as a result of the cold.

The late 1870s saw the French push further into the Sahara. The entire clime of North Africa was being changed by the Fall. More rain was falling and lakes began to reappear. The French Foreign Legion pushed eastward into Chad setting up a camp and latter a fort near Lake Chad. The British and French moved to ensure the safety of the Suez Canal. It was amazing that the Austro-Germans had moved into the Holy lands pushing the Turks out of the area.. Many were wondering as to whether the Ottomans and the Austro-German Empire would reach an agreement before another war was triggered

The French had no idea when the homeland would be able to be resettled in its whole. Paris was just an outpost held by a detachment of the French Foreign Legion and the French Army. For the most part the coastal region of France was a no go area. Storms had racked the region. A larger military and civilian settlement was at Vichy but the main population centers that remained in France were along the Southern region.
Northern Italy was the same with some Kingdom of Italy outpost but the main population was Rome and south of it. Sardinia and Sicily had seen a growth in population and there was a demand for Italian outpost or settlements in North Africa..
The British and French were worried about the stability of Egypt. The British had sent some military forces to secure the Canal. The Sudan had been under Egyptian control but there was unrest there and both the British Government and the French were concern about it. The result was that France reinforced its position in Chad. The Legionaires had 2 battalions of infantry, company of artillery and a squadron of Chasseurs D Africa.
Talk of the Mardi was enough to get everyone worried.

Portugal: The country had suffered a great deal of damage do to tidal waves caused by The Fall. The interior of the country was in better shape but Lisbon had been hard hit. Still it was the Empire of Brazil that responded to the devastation. Its Emperor dug into his personal fortune and spent money helping to begin the long road to recovery. Hawaii also sent Military engineers to Portugal to see what was the exact extent of the damage and what could be done.. Food clothing. temporary housing were some of the first things carried out. Engineers managed with what machinery could be brought in and Human labor to make a beginning. estimates were that it might take 40-50 years to make everything right.. Among the projects given priority were construction of safe drinking water, new sewers and housing. A new Hospital was established and Hawaii agreed to train medical personnel for Portugal.

The Italians were considering invading Libya but if they didn't hurry they might find that the French arrived before them. The French Military had been fighting a war in North Africa since 1832 but now in addition to the Legion the bulk of the French Imperial Army was in North Africa planting the French flag. There was some co-operation between France and Spain in the war. 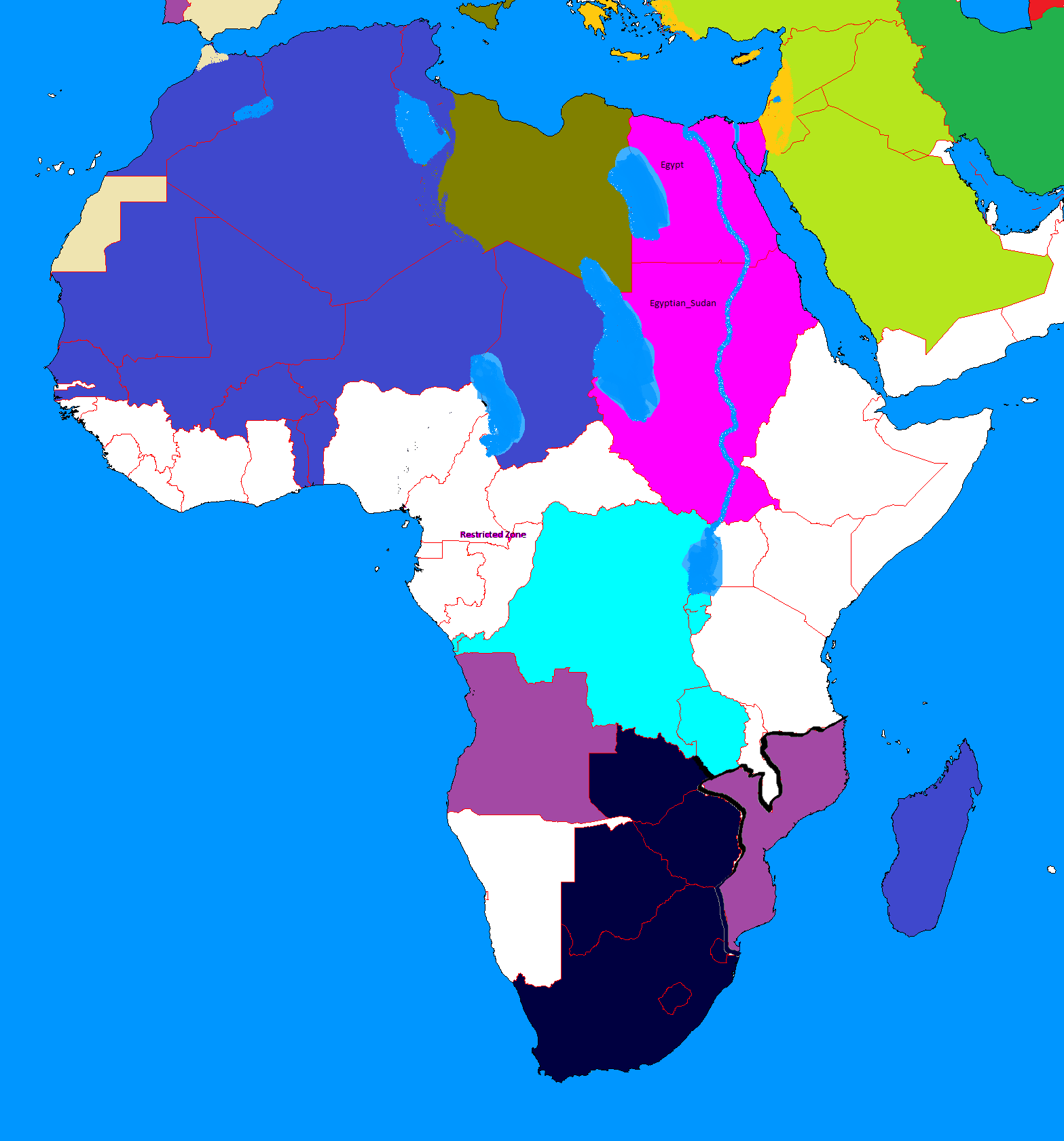 While the Italian finally did land in North Africa it was slightly too late. The French military had grabbed part of Libya.
Last edited: Mar 17, 2017

Italy gained territory in Libya but the French had gained the area around the new lake. Many were wondering if the French would apply pressure to get the Italians to give up more territory.

What's the restricted zone in the map? 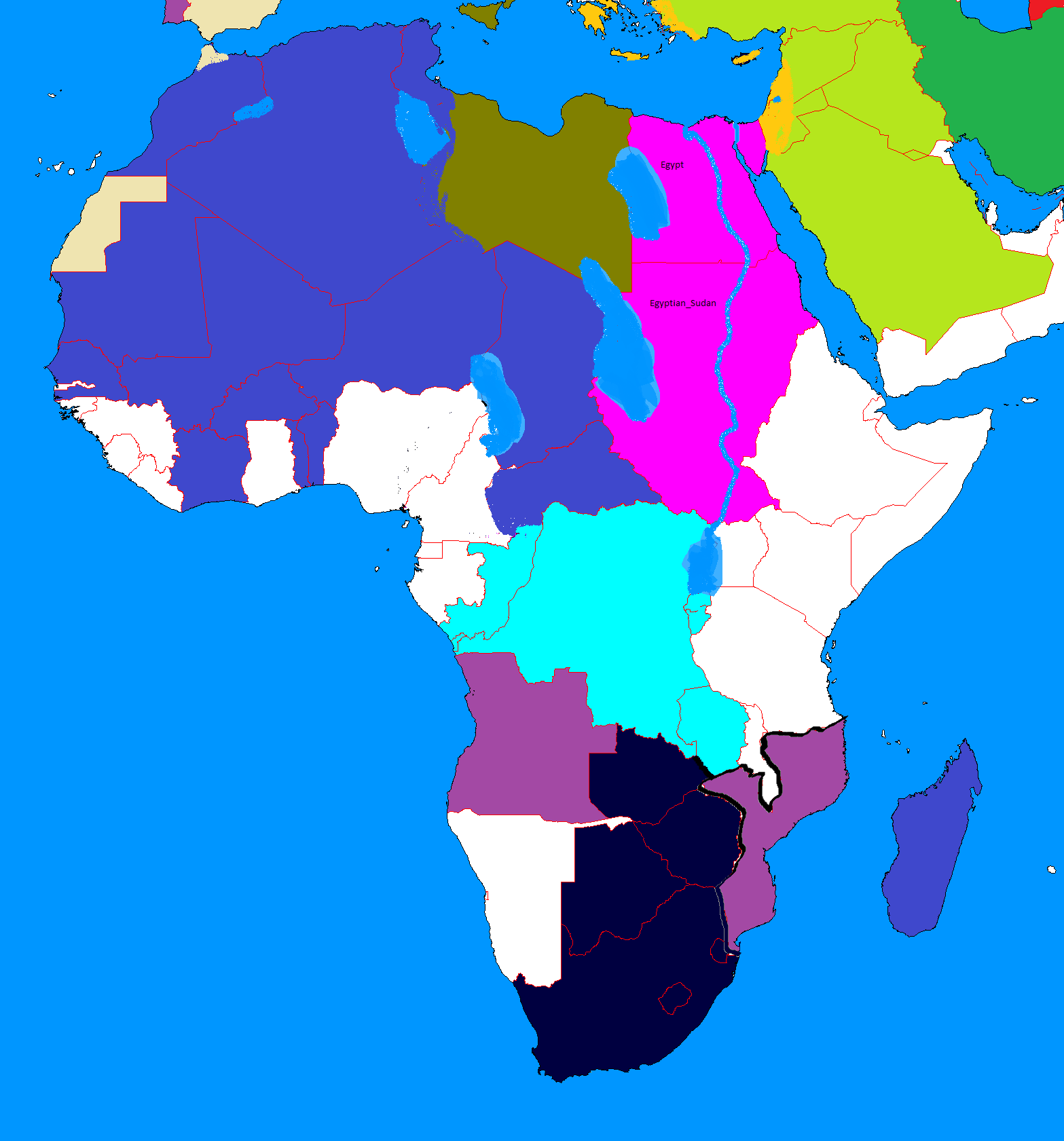 Something that could be a problem. Basicly I recycled an old map but failed to get the words restricted zone off of it. So for now its problem area with the natives that will require more military manpower.Above map with changes that take place in 1880s.
Last edited: Mar 20, 2017

Activity in Europe remained limited. It appeared that the Ottomans and the Austro-German Empire might be about to clash again over the Middle East and Asia Minor. The Germans had a far more powerful military and there were some on both sides that proposed a compromise. The Italians were now getting set up in their new colony while the French appeared to be continuing to expand.

From 1880 to 1884 the Austro-German Empire fought a war with the Ottomans. Finally a settlement was reached between the two sides ending the state of war between the parties ans allowing the possibility of trade between the nations to exist.
The Ottomans infrastructure had suffered greatly during these past 17 years. A lot of the trains were no longer operational and much needed to be done to set the nation right. The younger army officers had staged a coup resulting in the removal of a lot of corrupt officals. The Sultan was put on notice that changes needed to be made. 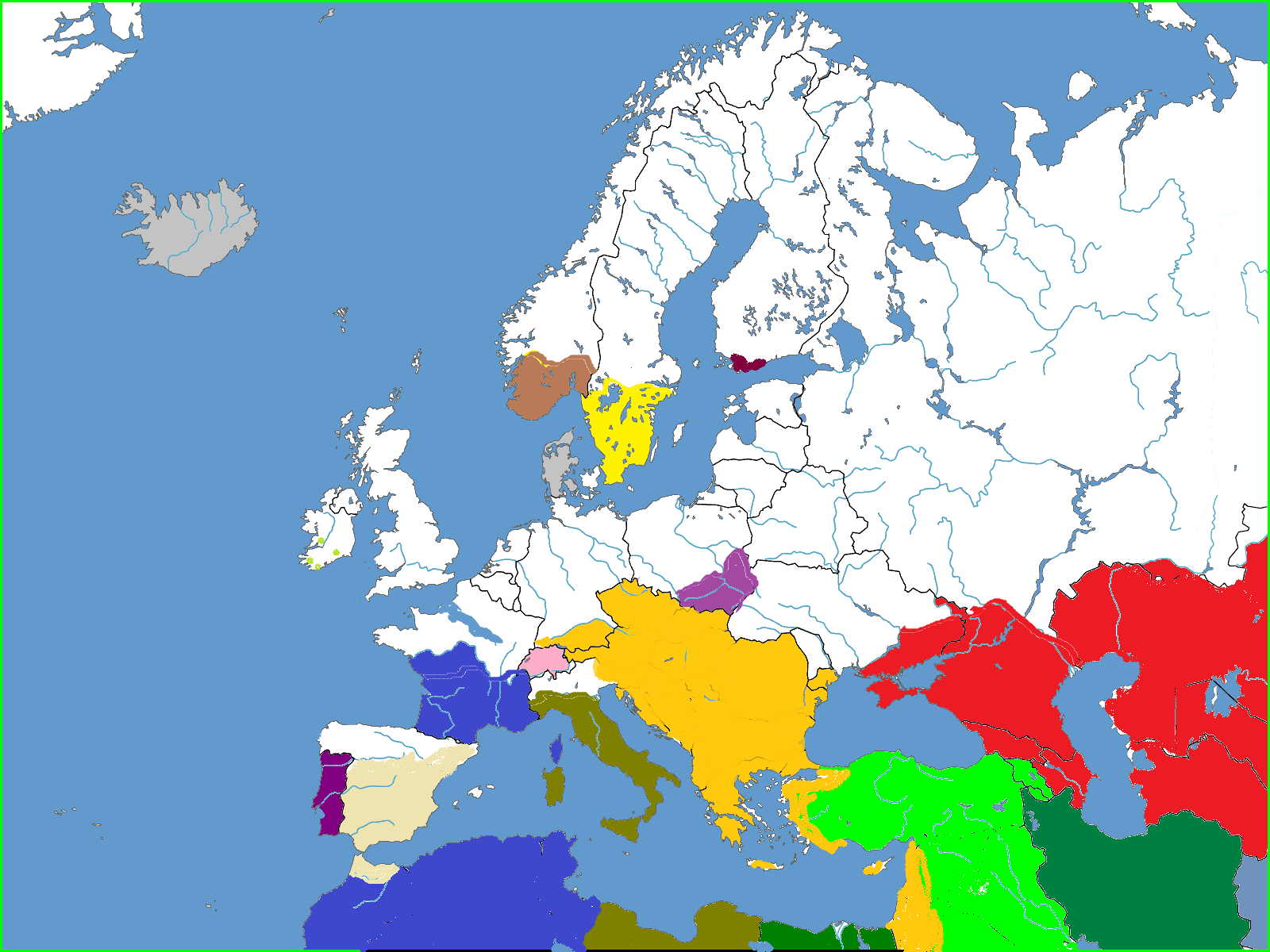 The peace Treaty between the Ottoman Empire and the Austro-German Empire was welcome by both sides. The Sultan was undering increasing pressure by the New Turk Movement to reform the Empire. The Ottoman Army was not capable of fighting another war. The entire transportation system was on the verge of collapse. The Ottoman Empire had had little capacity to produce the locomotives, rails and railroad cars. Much of the Ottomans communication system was also damaged. The Ottomans had little choice. The only places to possibly buy what was needed were the British Empire ( But the Empire was still straining to meet the needs to expand its transportation system in India, Burma and Malaysia and then there were a need for them in South Africa, Australia), French Empire ( Here again the French industry was busy trying to meet the needs in North Africa, France and Spain) or its former enemy the Austro-German Empire. The Austro German Empire had the spare capacity to both met the needs of the expansion and still sell to others.
Thus the Ottomans agreed to buy from the Austro-German Empire. German Engineers would also help to build a line to Baghdad.

The French and Spanish Governments were transmitting weather data by telegraph lines to Hawaii. There the University of Hawaii Science department was sending them to a new group that studied weather and the effect of The Fall on the Earth's weather.
The Group had mounted several expeditions to Alaska and British Columbia to gather data. The King of Hawaii had supported the group and Crown Prince Albert also supported it. A special ship was being designed. It eas estimated that it would take at least 2-3 years to lock in the design and at least another 5-6 to build it. Still Hawaii was seeking as much information as it could get. The Austro-German Empire's consulate agreed to send the request to the Imperial Chancellor.