Intelligence was reporting a lot of disturbing news coming out of Russia. There had been demonstrations in several cities and some labor strikes had also taken place. Czar Nicholas II was ill and then came the shocking news that Czarvitch Alexander had been assasinated. The Prime Minister had also been injured in an explosion. The Czars nephew had been summoned to the capital. Upon arriving he had summoned the commander of the Imperial Guard and ordered the guard around the Palace increased. Order was breaking down. Most of the army was staying on bases and the Chief of Staff of the Army had resigned. Only the Guard seemed to be responding to orders.

Troops from the Ukraine crossed the cease fire line and began to reoccupy Ukrainian land that had been seized by Russia. The Ukrainian forces were careful not to move into any area that had always been part of Russia. Meanwhile the Baltic States and Poland put their border guard on heighten alert. The RAF flew a Mosquito Photo recon plane over Russian territory,

The Russian Imperial Guard restored order in St Petersburg and Martial Law Proclamation was announced throughout the nation. Gregory Kerensky was appointed by Grand Duke Constantine as the new Prime Minister. The Grand Duke also took charge of the War Ministry and issued orders calling out the troops. Orders were given that any resistance was to be crushed. In Tsargrad a croup attempted to seize control of the arms plants and the army finally responding to orders found itself fighting armed groups of Insurgents from the Volograd Peoples Milita.

The Government of Russia was alarmed at the seeming collapse of order in the Country. The Russian Military and the Police had gained control of St Petersburg. Meanwhile a division of Paratroopers had control of the Moscow airport and had hold of part of the city. There was another battle for control and the army was being forced to move in armor support as the Insurgents had gain access to several armories. 30 T-50 tanks were supporting the loyal army units. Several Unions had gone on strike demanding massive reforms

Is the new Russian PM related to OTL Kerensky?
The best way out might be to progressively reinforce the powers of TTL Duma (can't remember if it's around given that it appeared OTL after the POD).

Yes, the new Prime Minister is related to Alexander Kerensky. Grand Duke Constantine has thrown his support for reforms such as land reform, wages and allowing the Duma more say in how Russia is run. Unfortunately he is facing a real threat to the state that Marxist have taken advantage of. There is fighting in Moscow and Tsargrad ( now also known as Volgograd) The Volgograd People's Militia have seized weapons and control of a tank plant and have proclaimed the Peoples Republic. Elements of the 11th Motorized Rifle Division and the 9th tank Brigade have attempted to crush the revolt but have failed. In Moscow the 1 st Parachute division with a tank Bn have control of the airport and the Kremlin. the 1st Guards armored division with the 38th Rifle Division (Motorized ) arrived from the St Petersburg Military District and have applied more pressure on the insurgents.

Moscow was finally taken after some truly brutal fighting in the city. Several buildings were leveled and Loyal Police elements were able with assistance to gain the upper hand. In the south the Volgograd People's Militia gain the upper hand and drove the army out with the aid of additional leftist element. The group renamed itself the Red Army The 2nd Guards Rifle Division Motorized arrived and its commander assumed control of all of the loyalist forces in the area. The 11th Guards Airborne Brigade dropped into the areas oil field and captured it shutting off the flow of oil and gasoline.

Grand Duke Constantine, who was acting as the ruler of Russia and Minister of War appointed General Zhukov as the Commanding General of all Loyalist forces in the Volgograd- Caucasus Region. Loyalist forces had regained control of Armenia. The Armenians had allied themselves with the Kurd's to drive the Turks out of Armenian territory.

Britain and Austria had recognized the establishment of Kurdistan as an independent state. The Turkish Republic was in a state of conflict with everyone it seemed.

Fighting in Russia continued as the Government finally after 3 years of fighting put sown the insurgents. Forces were now moving into the Caucasus region to root out the remaining Marxist forces in the country. Grand Duke Constantine put his cousin Anastasia on the Russian throne and okayed the moving forward with reforms by the Duma. He would continue to guide the Military by was prepared to recommend newly promoted Marshal Zhukov to be the new Defense Minister.

Kaiser Otto I okayed talks with the Republic of Turkey regarding a permanent border settlement between both nations.. The Austrian Imperial Parliament approved the Independence of Lebanon and the Commonwealth of Nations oversaw the elections. France,Britain, Hawaii and the US sent representatives . Syria was granted independence and Britain Granted Mesopotamia independence.. In 1949 the Kingdom of Israel-Palestine declared independence from the Austrian Empire and the Kaiser signed the papers granting full independence,the new Kingdom offered the crown to a member of the British Nobility

American and Hawaiian Oil companies were partnering with a Kurdish Oil company to explore for oil. The discovery of Oil created a booming economy. The Royal Hawaiian Oil Company was helping to train Kurds in doing the jobs that were needed by a successful oil company Esso and Texaco were the two American companies that decided to get involved.
Mesopotania was seeing two British companies drilling in the state.

The Greeks had begun to express a desire for independence from the Austrian Empire and a return to an independent state. The trouble was that nearly 35 % of the population of the area formerly known as Greece was not Greek. It was Austrian, Serb and Croatian as well as some German.

Are there contiguous parts of Greece where Greeks are a majority?
Maybe a rump Greece or a very autonomous province would partially satisfy both parties (Greeks and Austrians).

The ethnic Greeks of the Austrian Empire seem to be concentrated in Athens and the area south of it. The Imperial Government has sought a solution which would require the relocation of some people a lot of the Muslim population was relocated out of Greece and into Turkey. All of the Christian population of Turkey was moved around and relocated into the Austrian controlled parts of Asia Minor.

How much of Asia Minor is Austrian? 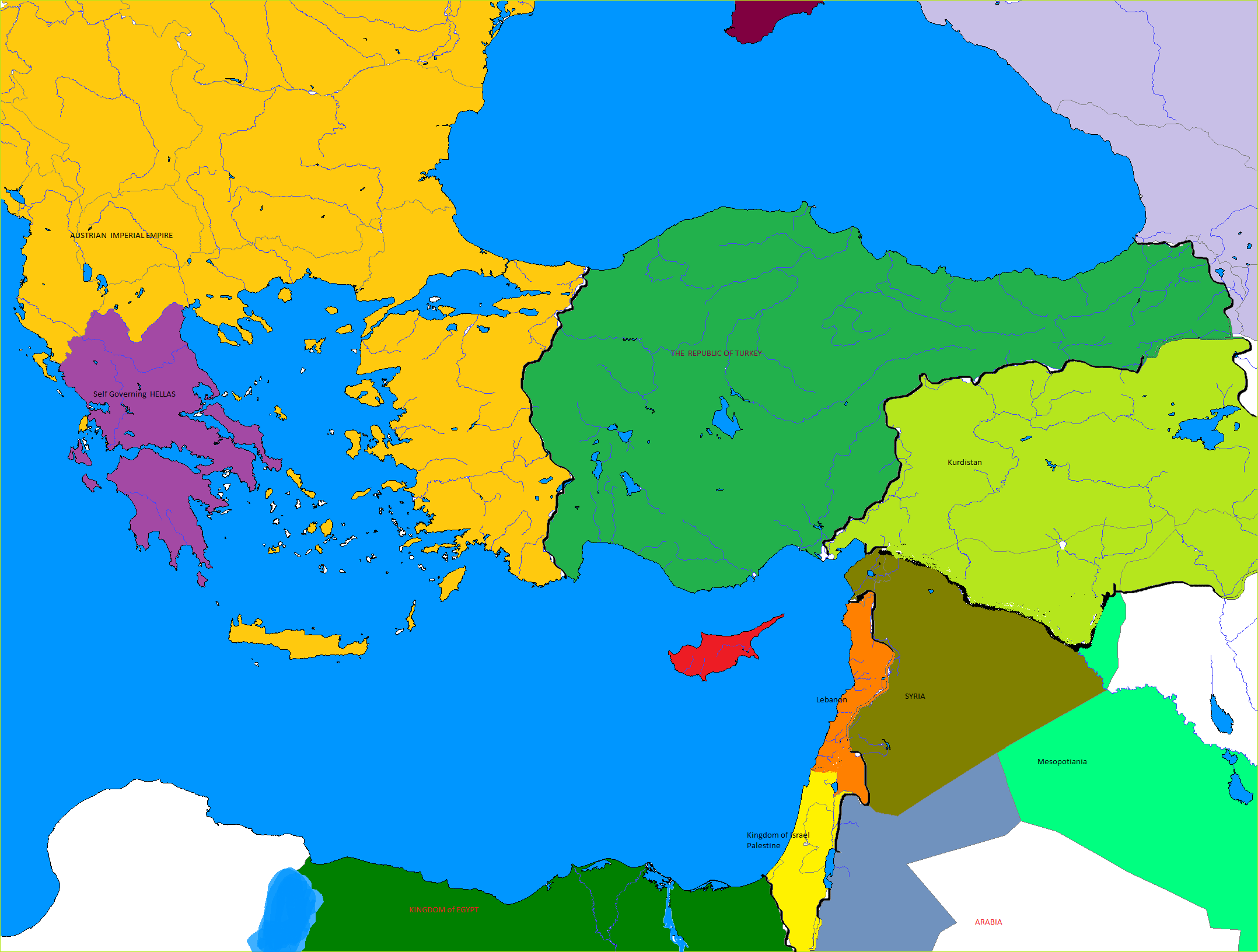 The Austrians pushed the Ottomans back from the Bosporus Straits and the western coast from 100- 150 miles. Basically the region the Greeks claimed as part of Greater Greece. The Austrians took Lebanon , Israel-Palestine and parts of Syria.
Last edited: Nov 22, 2019

The Austrian Empire granted what was now designated Hellas self rule. The Imperial government retain control over defense and foreign policy. 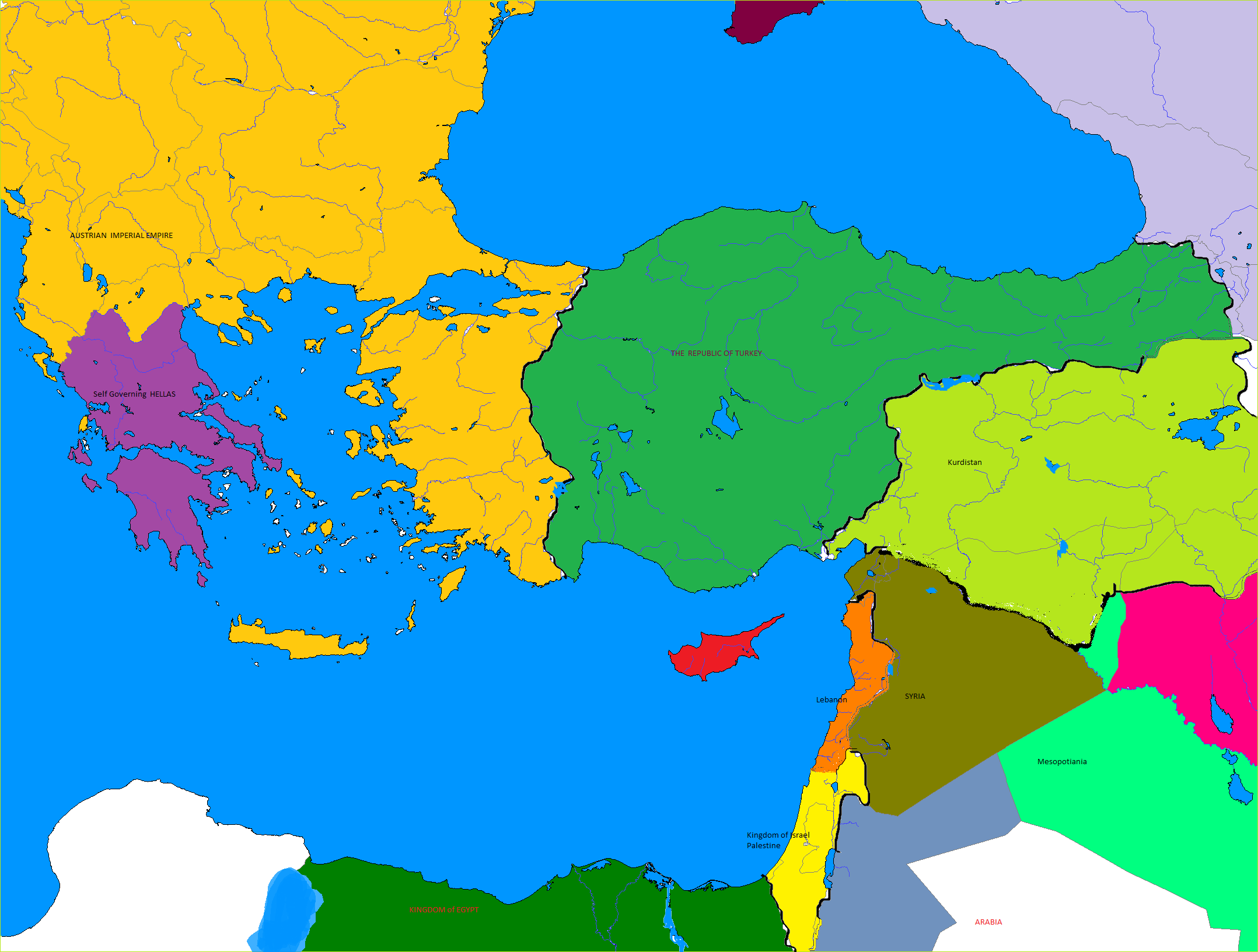