Or own all of North America, just saying

holy shit we are nearly at 20 map threads

Courtesy of u/Aofen from Reddit: what if the US has a civil war as complicated as Syria?

Make sure to read the faction list, which is...something else. 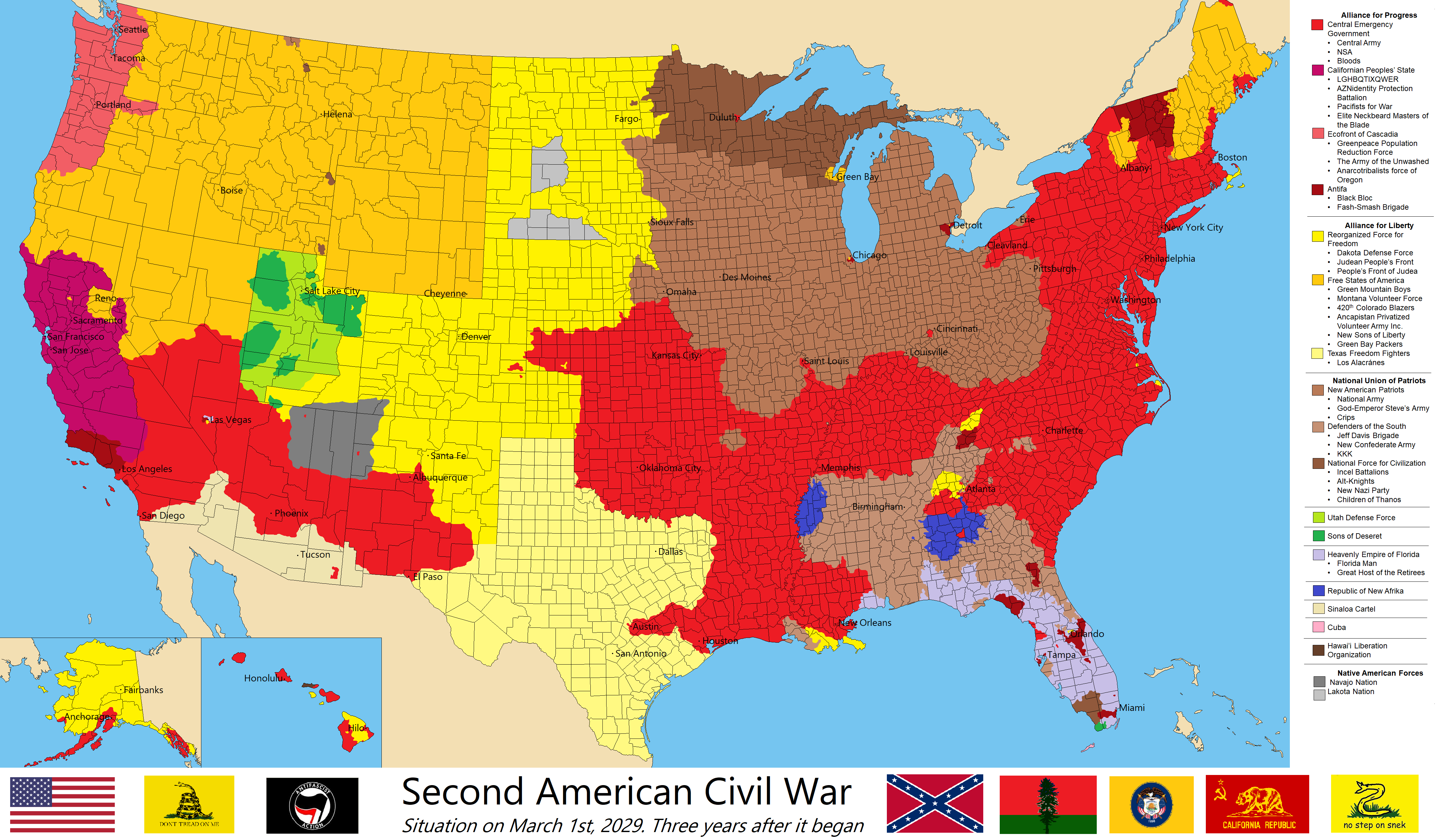 Banned
How can Florida even lose. It has the world's most powerful superhero on its side. Also Ancapistan Privatized (c) is copyrighted so expect them to sue you.

The map is fun, but commie-West Coast is an overused trope.

US intelligence and (i assume) the Bloods and Antifa on the same side?

Bleh said:
The map is fun, but commie-West Coast is an overused trope.
Click to expand...

Commie anything in the US is a silly trope.

Bleh said:
The map is fun, but commie-West Coast is an overused trope.
Click to expand...

Also, I doubt the Dakotans/Nebraskans would find common ground with Coloradans.

TrucKola said:
Also, I doubt the Dakotans/Nebraskans would find common ground with Coloradans.
Click to expand...

Moreover, SoCal would have trouble existing in direct opposition to any other faction upriver of the Colorado.

POD: Romania's government is two hours late in accepting German-Italian arbitration over Transylvania compared to OTL, so Hungary invades Romania before the acceptance of arbitration can be relayed to Berlin
Inspired by this post

"These Magyars will learn another side of us when we have won our victory"
-Joseph Goebbels to Adolf Hitler, moments after Case Strauss was authorized on August 30th.
​
When talks between Hungary and Romania over the fate of Transylvania collapsed on August 24th, Hungary decided to use military means to force Romania to accept its position on Transylvania. While Romania had a fairly strong military on paper, Hungary was encouraged by the lack of Romanian resistance to the Soviet occupation of
Bessarabia and Northern Bukovina. Furthermore, Hungary believed it had secret assurances that the Soviets would quickly respond to a Hungarian attack on Romania by taking simultaneous action against Romania (with the aim of establishing a Communist government in Bucharest). Stalin had expressed a favorable opinion towards the Hungarian position regarding the Transylvania dispute. Accordingly, Hungary prepared to invade Romania at daybreak on August 28th. The attack was to be be called off only if Romania unconditionally acceded to German-Italian arbitration (which the Hungarians knew would go in their favor). The Soviets for their part, planned to begin massing troops on the border as soon as Hungary attacked, then weigh options from there.

Romania was aware of the impending two-sided threat. While the Romanian General Staff were confident that the Romanian Army could beat the Hungarian Army alone - they believed Soviet intervention would spell doom. While the idea of arbitration - which would surely lead to substantial cessations of Romanian territory, was unpopular, the Romanian government was coming around to the view that it was the least bad outcome. Debate on the matter continued from late on August 27th through the morning of August 28th. However, shortly before the Romanian government finalized their decision, the cabinet meeting regarding arbitration was interrupted by news that Hungary had crossed the Romanian border. All bets were off now - for if Romania accepted arbitration now, their weakness in the face of Hungary would only encourage Germany and Italy to award Hungary even more land. If the Romanian Army stood, and fought the Hungarians to a stalemate (or actually reversed the incursion), Romania's position in any arbitration would be strengthened. Accordingly, Romania's ambassador in Berlin was informed by Bucharest to not relay acceptance of arbitration to Germany.

When Hitler was informed of the Hungarian Invasion of Romania and Soviet Troop movements, he flew into an apoplectic rage. In the interests of preserving the peace in Southeast Europe, Hitler had strongly argued in favor of the Hungarian position in Transylvania, and Hitler's diplomats had spent the previous week trying to pressure Romania into accepting an arbitration. Now, the Hungarians had "exposed their perfidious nature" by directly circumventing German efforts, and Hitler became determined to crush the "traitorous Magyars." While he was talked down from his initial impulse to "eradicate the Hungarian nation by partitioning it along the Danube [with Romania] and destroying its people" due to logistical concerns, Hitler was dead set on punishing Hungary for declaring war on Romania.

Viewing the threat to the stability of Southeastern Europe as a direct attack on German interests (in particular with regard to the security of the Romanian oil fields Germany depended so much on) Hitler ordered the Wehrmacht to draft and implement invasion plans for Hungary within 48 hours, and the German ambassador in Moscow quietly informed the Soviets that if they made any moves into Romania there would be "severe consequences with regard to the German-Soviet relationship". German soldiers began to assemble at supply depots and launching off points in Austria, and Luftwaffe Units (currently engaged with the RAF in the Battle of Britain) were emergency rotated into Southern Germany. The OKW scrambled to finalize and disseminate an invasion plan in 48 hours, but around 10pm on August 29th, Hitler was informed that the plan was ready to be implemented at his command. Fall Strauß would be launched the following morning.

The Hungarians were caught completely off guard by the German attack. In a further setback to Hungarian fortunes, the Soviet Union did an about-face, announcing that it would respect Romanian territorial integrity. Stalin, still reeling from the purges and Winter War, believed the Soviet Army was in no position to fight the German Army, and accordingly sacrificed Hungary to the Wolves. In less than two weeks, Hungary was completely occupied by Germany, Slovakia, and Romania, and the victors began to divide the spoils.

Slovakia received the territory it had lost to Hungary at the First Vienna Award as well as Carpathian Ruthenia (which was also occupied by Hungary in 1938). Germany annexed territory along Hungary's western border, extending the border 30-50km further East, taking in Hungarian towns with substantial German minorities (and territory besides). In the south of Hungary, the Turkish Swabia region (which had a large German minority dating back to the 1600s) was detached from Hungary as a separate state under the rule of the SS. Romania initially only made minor border corrections with Hungary. All the aforementioned nations reserved the right to deport Hungarians to the rump "Protectorate of Hungary" as Hungarians were deprived of citizenship from those countries and assigned Hungarian citizenship. Romania pursued deportations with the most enthusiasm of the victorious powers, hoping to depopulate majority Hungarian areas (particularly the Székely Land) to provide a sort of internal living space.

While the borders of Southeastern Europe were in flux, Hitler sought a border adjustment with Romania. In addition to being relatively resource rich, the Romanian Banat had a sizable German minority (which had attempted to form its own state in the aftermath of WWI before being occupied by Yugoslavia and Romania). Hitler sought to revive the Banat State (which like Swabian Turkey would be placed under German protection) - and pressured Romania to cede the territory. In return for ceding the Banat, Hitler offered Romania the entire territory of Hungary east of the Tisza River. Romania was reluctant to annex a territory with such a small Romanian population, but they eventually acceded to German requests (which towards the end began to take the form of a demand). The remaining German population of Romania was to be transferred into Banat, while the Romanians of Banat would be relocated into Romania proper.

Hitler had inflicted a Second Trianon upon Hungary - and sent a clear message to Germany's allies and clients. Betrayal would be punished severely. 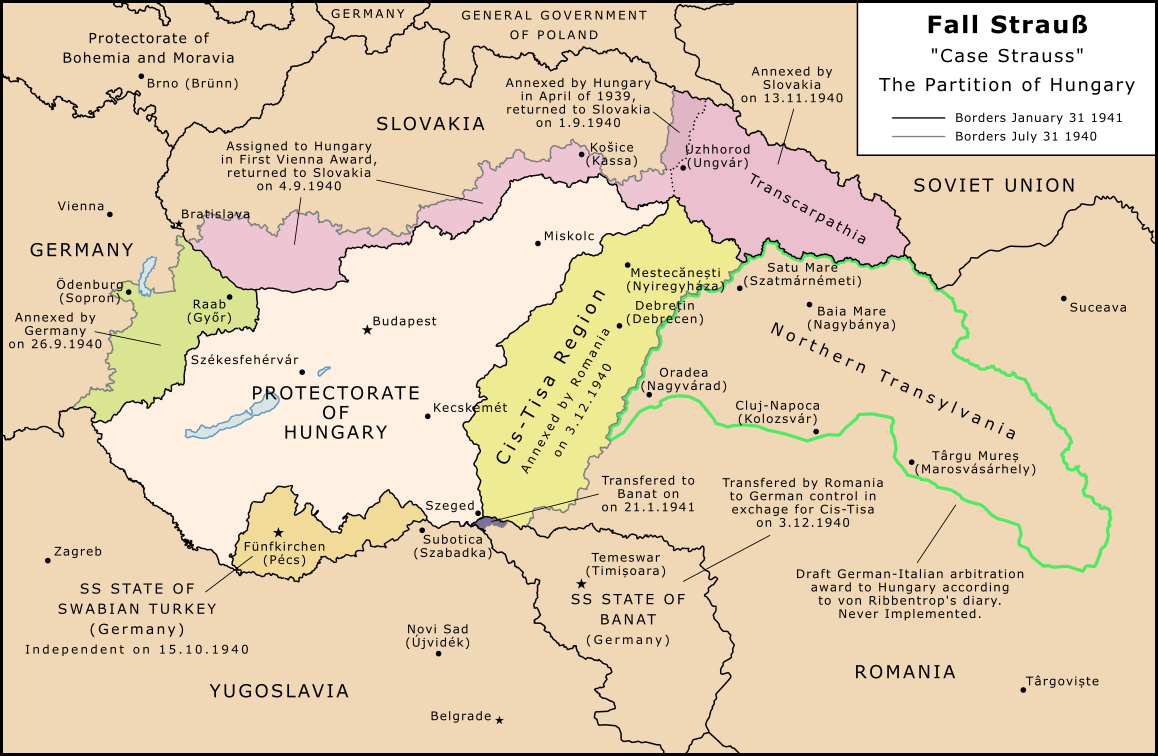 Interesting! I wonder what the borders will look like after WWII ends (in a German defeat, that is: ally thumping hardly changes the higher probability income...)

Something from brilliantmaps.com, in the category of "prejudice maps": food horrors map of Europe. (The theme for the day appears to be "blood") Dressed herring and salted pig fat are actually much more mild compared to everything else. Also, my Scottish side is about to stroke at deep-fried pizza. Sounds fatally delicious.

TrucKola said:
Dressed herring and salted pig fat are actually much more mild compared to everything else. Also, my Scottish side is about to stroke at deep-fried pizza. Sounds fatally delicious.
Click to expand...

To be fair, twelve countries worth (if you include the Austrian heart and thirteen if Wales is counted separately) are simply about blood. And I am wondering if liver paste means something different in Denmark than Norway. Over here people spread the stuff on their lunch breads all the time.

Reagent said:
POD: Romania's government is two hours late in accepting German-Italian arbitration over Transylvania compared to OTL, so Hungary invades Romania before the acceptance of arbitration can be relayed to Berlin
Inspired by this post

Utterly fantastic. Only way to make it better would perhaps be to show the areas with high populations of Transylvania Saxons. Then again, this style of map doesn't look the best with that sort of thing anyways, and Transylvania as a whole gets a bit complicated when trying to show off who populates what and what area is empty. There were also plenty of Swabians in Hungary, both in abanat an in chunks of areas around and between Budapest and Banat on this map.i am never sure if they were th she majority or not, as it was often shown on Austria maps, though them settling wouldn't be surprising given it happened when the area was less populated. Ahhh, and does the area annexed from zhungsry go into just one Reichsgau? Burgenland was split between two Austria reichsgaus after their annexation to Germany, but I imagine it might be a bit large to do here. Will this all have Yugoslavia much more eager to please?

Agree about the pizza, also Frogs Legs is really good, it's like chicken wings but saltier.

Sourdough soup has me intrigued as well.

Rice in blood? What do they mean?

Oh. Cabidela. Never ate it before.

Pantegral said:
Courtesy of u/Aofen from Reddit: what if the US has a civil war as complicated as Syria?