Thanks for the long response. Will try to do it justice.


Clandango said:
I believe that the area where New Mexico borders Oklahoma in our world does not align completely with the Texan border. Extremely minor, and I st first thought other maps showing that on here were wrong before I checked up current day maps.
Click to expand...

I tried to follow the base map as best I can but that might have been my own subconscious assumption guiding my hand. This is my first map trying to copy a real map with my own hand.

Ahhh, and would Las Vegas be large or important enough to show up on this map in this point in time? Though I see it is one of the smaller names.
Click to expand...

Las Vegas was on the basemap but very small. I added because I needed a name in that spot and recognizable is nice.

By the way, is this map partially propaganda? I am wondering which tribes would have been doing the attacking (though I imagine they would have had their reasons)
Click to expand...

I haven't written the updates for this part yet so I can't answer in detail. And yes, this is a bit bombastic.

I can't see if this would really be seen as helping the South.
Click to expand...

Many Southerners wanted a southern route in OTL. They never truly rallied behind the cause and then the Civil War happened. In this TL however, the South stays in the Union (mostly) and is able to throw their Congressional weight around. It should be noted that this railway is viewed as able to export slavery to the Southwest, a vital feature for the South. Also,t he idea was that the railway would be an economic boon to everywhere it passed (which was not truly the case in OTL).

Also something in my head wondering if this would involve them going through a load of mountains. I remember reading that the Gadsden Purchase was partially to gain some good land for a southern railroad, though I suppose if the railroad doesn't go through Texas, they would have little reason to curve the railroad even further south, right next to Apache territory.
Click to expand...

When the USA did surveys of the West, looking for routes (organized by Jefferson Davis), they looked at four. One was very far north from Minnesota through Dakotas to Portland area. One was OTL through Utah. Another was through the Gadsen purchase so extremely close to the Mexican border. A fourth was considered on this route which later became highway 40 (and the Sante Fe railway). The landscape allows this route.

Given the date on the map, was there no Civil War? They South all grabbed even more concessions and promises form the North withtou giving anything in return? And was the railroad to northern California and Oregon complete by now? Otherwise we are getting the Great Plains less heavily settled. I can also see a lot of outrage in the north, at how the railroads aren't taking people to lands that can be more easily settled. Would we see statehood in the southwest before we see it in Wyoming and Montana?
Click to expand...

The TL is a Douglas wins in 1856 and manages to hold the union together. And yes this is a sop to the South to keep them engaged, and not a popular one. And yes, I foresee faster statehood for the Southwest in this TL although the climate is very harsh here. Mostly mining really, at this stage.

What am I doing said:
There is a point where we needed to stop and we have clearly passed it.
But let's keep going and see what happens.
Click to expand...

This just keeps getting better. I do feel bad for the Socialist Republic of Iran. ("Every night, I can feel my leg… and my arm… even my Khuzestan...") 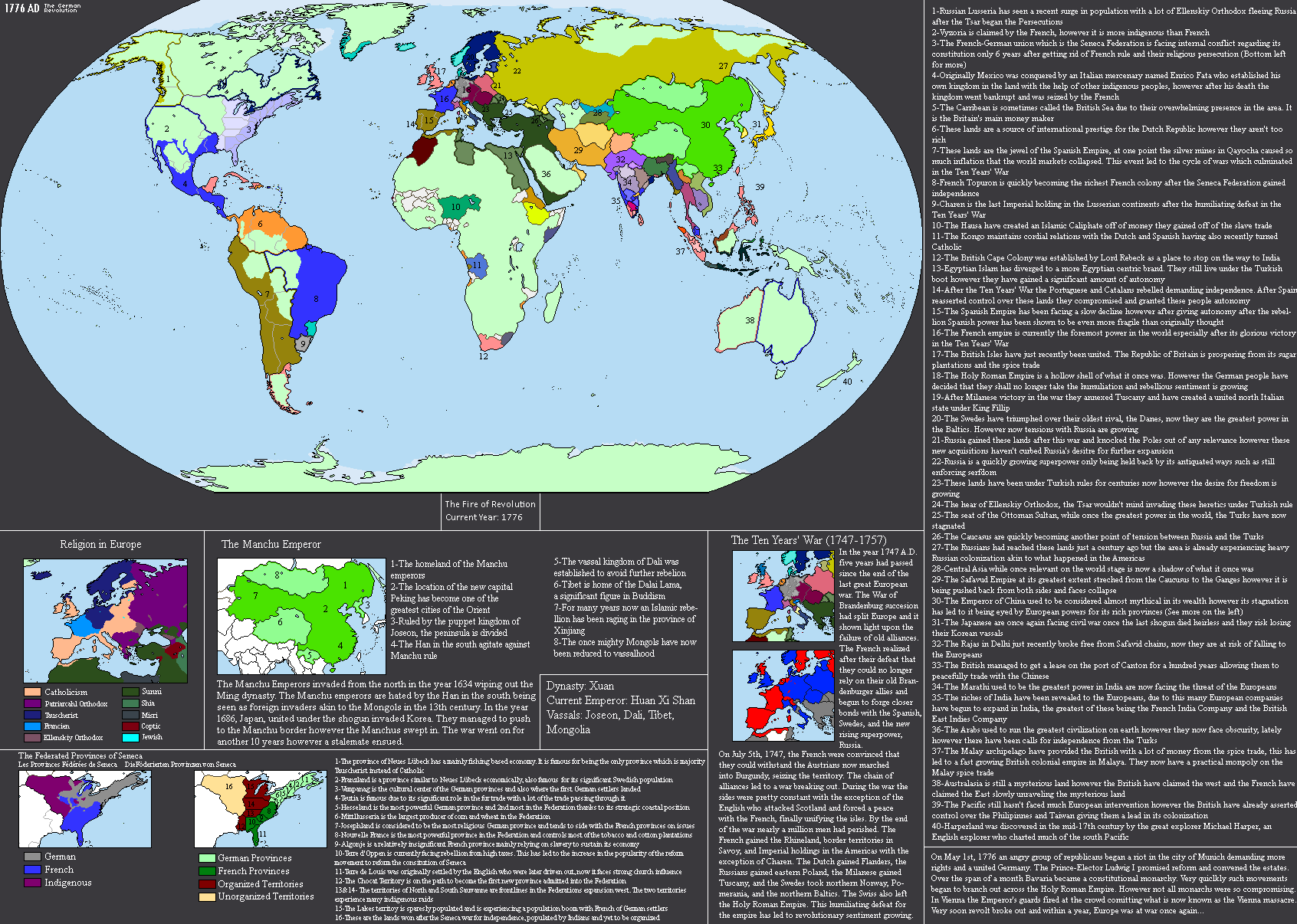 The Fire of Revolution

@Tert2567 is Finland part of your Western European polity?

Logothétes said:
This is very nice. Is there some type of Cold War situation going on between the EF and that big-ass Russia and Eastern Europe?
Click to expand...

I think it's a sort of dialogue. Relations are better than their real analogue

Finland is a part of Russia

What am I doing said:
There is a point where we needed to stop and we have clearly passed it.
But let's keep going and see what happens.

The Ryukyu islands seem to be missing. A shame, as they would be very aestheticslly pleasing, be they off the Chinese or American coast.

I've got a new map. It's for a realistic CP victory in WWI.
THE FIRST GREAT WAR:
The First Great War was a devastating conflict for the European powers of France, Britain, Austria, and Russia and it was the true ascendance of Germany on to the world stage. The Germans and their beleaguered Austrian allies would focus on the Russian behemoth on their border while only keeping the Western allies, France and Italy, at bay. This strayegy would be incredibly effective as the ill trained and equipped Russian conscripts would fall prey to the more professional German and Austrian armies. By 1916, Russia was on the verge of collapse and was forced to surrender. Meanwhile, in the West the British had joined the war against Germany and her allies while the Ottomans supported the Germans and declared war on Russia and Britain. Despite the UK's colonial might, they had a very small army without conscription and the few British forces mode little difference on the Western front. In the Middle East though, the British beat back the declining, corrupt and prone to revolt Ottomans with the help of Arab rebels. In the West however, the Germans consolidated all of their forces now free from the Eastern Front to attack France through Belgium and Luxembourg. This would devastate the allies and the French and Italians would capitulate and the British would remain alone. Though they would take more of the Ottoman Empire, the British would never be able to take the continent. Eventually an armistice was signed. The Germans would form a group of puppet states through Eastern Europe, Serbia would be split between Austria and Bulgaria, Venice and the Italian colonies would go to Austria, The Germans would take some parts of Northern France and Belgium would go to Germany, and Germany would take French and Belgian colonies. However, Britain would get free reign against the Ottomans.
AFTERMATH:
The First Great War was not a great victory for either side. Though the Germans would be the hegemon of Europe, they were war weary. The French were utterly devastated and Russia was now under a radical socialist regime. The Ottoman Empire would totally collapse, with the Arabs getting Jordan and Assyria, the British having protectorates in Palestine and Iraq, new Kurdish and Armenian states, and even loosing Istanbul itself to Greece. In other regions, Japan and the US, the two great powers unscathed from the war, would continue to build strength, and Japan would encroach on Chinese territory. Another catastrophe would be the Great Depression of 1929. Though the US, Germany, UK, and Japan could weather the collapse, France and Italy, already extremely fragile, would fall to another socialist regime bent on reclaiming land from Austria and Germany. The French Republic would go into exile in Algeria, French West Africa, and Madagascar. Tensions would slowly mount between the First Internationale (Russia, France, Italy), The Central Powers (Germany, Austria), and the Entnete (the UK, Commonwealth, France in exile).
THE SECOND GREAT WAR AND CONSEQUENCES:
In 1940, the war would begin. Initially Germany and Austria would be on the back-foot. The modern, blitzkrieg of the French and the sheer manpower of Russia would be a challenge for the old imperial powers. However, the German economy was far greater than France and Russia and they would eventually be pushed back again. In Russia, the Germans and Americans would provoke a democratic revolution in Russia while conquering France with help from The British and French Government- In- Exile. After the war Austria, now severely weakened, would collapse into multiple new nations. After the Great Wars, the British and Germans would relinquish many of their colonies. Thus we see the state of things in 1960, a world divided between the Western Powers (US, UK, France), Central Powers (Germany, Russia), and Eastern Powers (Japan and client states).

Some of those borders are quite curious.

If French-in-exil and the British were ally, why that British Brittany ?

Wendell said:
Some of those borders are quite curious.
Click to expand...

I am quite intrigued at the random British west Brittany.

Greece is already my favourite.

Analytical Engine said:
I am quite intrigued at the random British west Brittany.
Click to expand...

It was taken once the French became communist. The British sent a small expeditionary force to France to aid the government and they soon had to retreat to Brittany

What is up with that small Russian strip in Karelia too?

EmperorKazooKid said:
It was taken once the French became communist. The British sent a small expeditionary force to France to aid the government and they soon had to retreat to Brittany
Click to expand...

And why didn't they gave it back to free-france after the war ?

Undeadmuffin said:
And why didn't they gave it back to free-france after the war ?
Click to expand...

Because everyone knows the cool kids stay part of the British Empire.

The map thread's been extra-shiny lately: keep it up, folks! You're doing grrreat, to quote an anthromorphic feline.

What am I doing said:
There is a point where we needed to stop and we have clearly passed it.
Click to expand...

Probably. But as long as you're still having fun...

I forget: was this an ASB switch at some time in the past, or was the idea that the geography was always that way and the OTL nations somehow still emerged in the "right" places? Because if the second, I really want to read that backstory.

What am I doing said:
There is a point where we needed to stop and we have clearly passed it.
But let's keep going and see what happens.

I like those maps! I still like them, and I don't think there was any point "where we needed to stop" switching Asia and the Americas!

Ziuwari said:
And another one!
More of them: https://cyowari.deviantart.com/
Click to expand...

Map looks excellent, but Wuhan is absolutely an anachronism, as the portmanteau of Hankou and Wuchang didn’t become common until the 19th century and wasn’t official until the 20th. Otherwise impressive. I was actually forced to look up some of the other names I thought were similarly modern only to find that many have been in use for 900 years or more.
Top