Would you consider making a "flat" version of your world map in the form of a png similar to q-bam? While your NatGeo stylistic map is aesthetically pleasing, I think more of a blank bare-bones "political" map would help make the borders and distinctions clearer. Otherwise, fantastic work as always!

MasterSanders said:
Would you consider making a "flat" version of your world map in the form of a png similar to q-bam? While your NatGeo stylistic map is aesthetically pleasing, I think more of a blank bare-bones "political" map would help make the borders and distinctions clearer. Otherwise, fantastic work as always!
Click to expand...

I think it's possible for me to do so, sure. I might just do a country-name-only classroom political map one of these days. 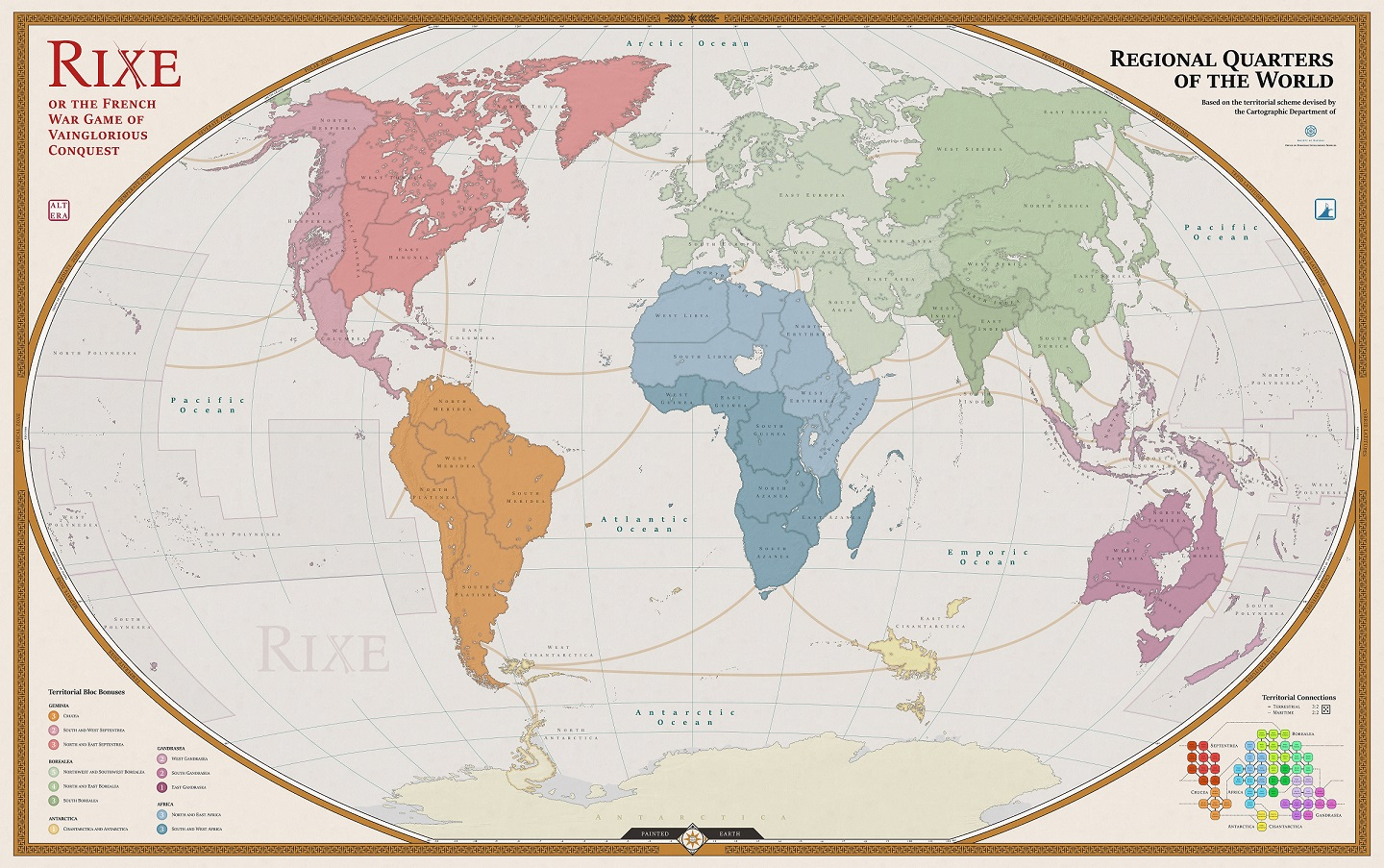 Zveiner and I made this Risk game for the r/atlasaltera community. To see a larger version, go to my Deviantart. You can also download a 3 feet png file and print off your own tabletop version if you support me through my Patreon.

There isn't too much lore to say here. If this is your first time seeing the project, check out the preface on the website or read through my responses to questions on my first post on ImaginaryMaps.

I made this to give a little historical context for the project. I plan on doing more 20th century maps but also maps of the late modern period to explain how the contemporary world turned out. Some lore is in the graphic itself. I'd be happy to answer any questions here.

You can see a higher quality version on DeviantArt or a print vision on Patreon. 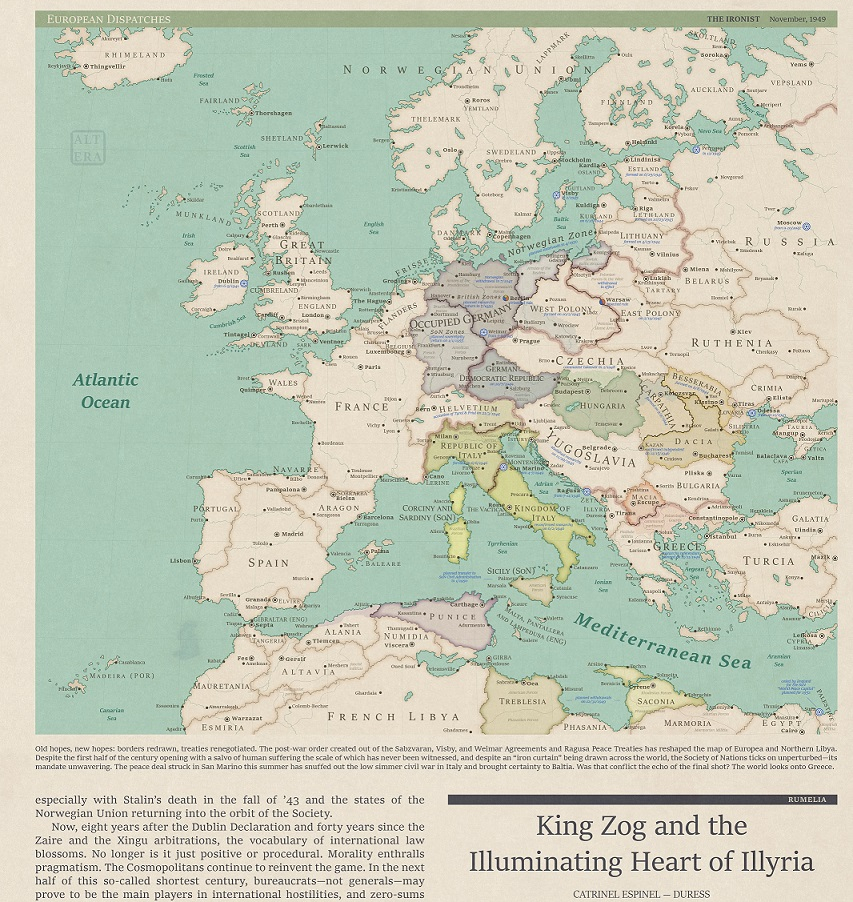 This is a language family map for Atlas Altera and is based on the primary language used by a state. There are over 200 represented here (hence the colour theory nightmare). To put it in perspective, in OTL, only about a dozen language families can be represented on the political world map. 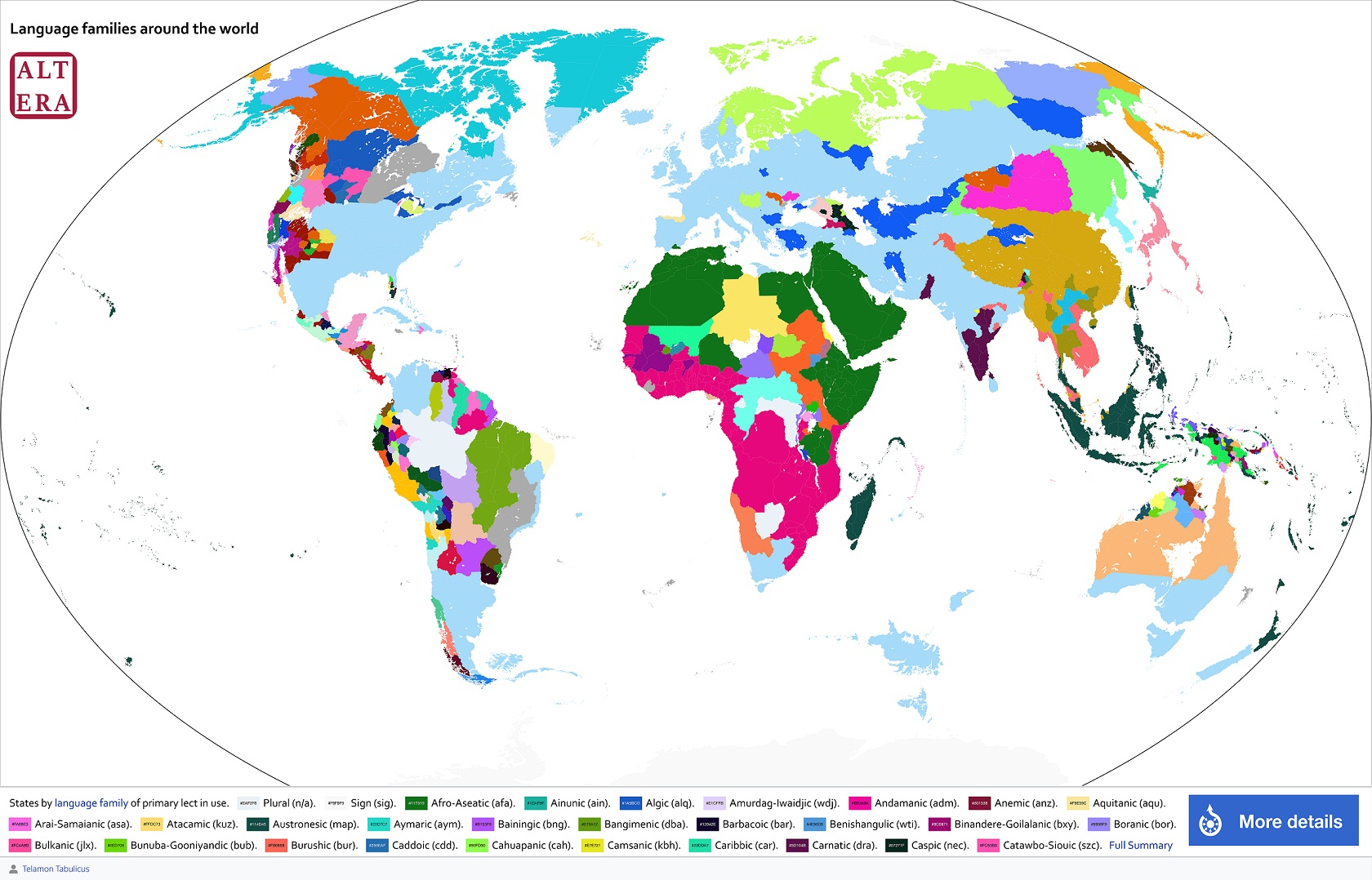 Check out https://www.atlasaltera.com/language-families for a full legend of the language families, inspired by the Periodic Table of Elements.
For those interested in taking a closer look, all the linguistic data for Altera has already been released on my Patreon.
Join us on r/atlasaltera and stay tuned for a future version that will be fully interactive.

For more on Altera or if this is your first time introduced to the project, check out my videos on YouTube, see my Deviantart for my maps, or see the comment thread of my first post for questions answered.

On a more personal note, I've been itching to share this as I worked to fix all the glitches over the winter break. I have not been able to fully imagine what the language spread of the world I created until now, when I generated this map with my data set. So although this map doesn't look like much, it's a bit of a personal milestone haha.

PS: yes, there are new additions/countries on this map from the update that I am releasing later in January. Consider this a sneak peak / first look.

Is there a complete list of countries and their people?

Yes, sort of At the moment, I only am working with Excel, but I am slowly but surely building up the makings of a database. The language spreadsheet was prioritized and completed, so every autonomous territory is logged there, for a total of 1362 unique territories/entries. That spreadsheet is currently still being used internally, but I have made it available on Patreon.

As for the food staples/domestications spreadsheet, and the general factbook, there is only this so far, corresponding to the content published via map plate posts on the website:

I am also collaborating on an interactive version for the map where people can see what language is spoken per state.

Actually, here's a little sneak peak that I captured off Instagram of that interactive map coming down the line:

Welcome back to Instagram. Sign in to check out what your friends, family & interests have been capturing & sharing around the world.

Here's a historical map, circa 1600s, of the Southeast Asia version of Altera, so Sumatrea and nothern Tamirea. For a larger image, see the Deviantart. 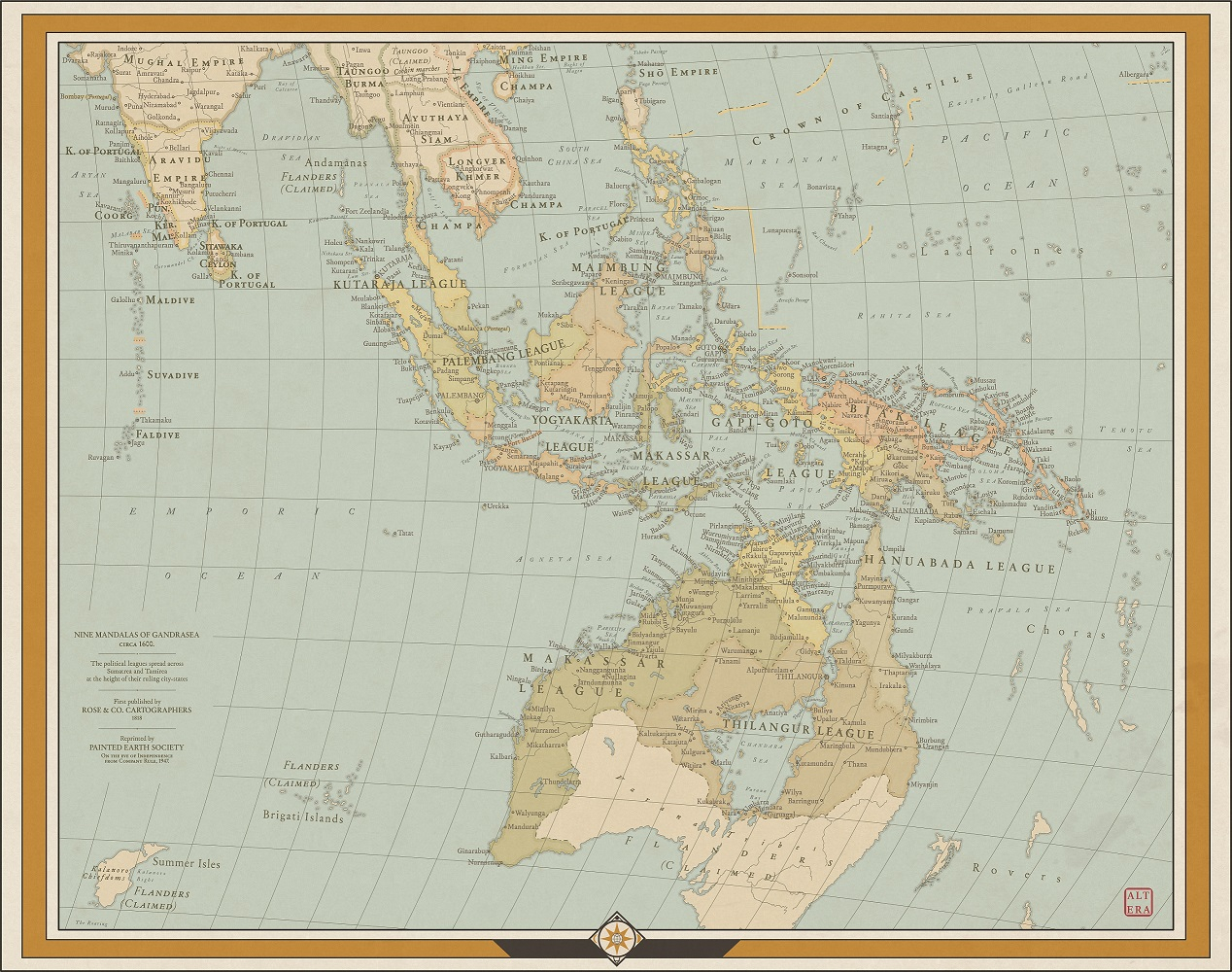 The Nine Mandalas at their Height c. 1600 - The Political Leagues of Sumatrea and Tamirea Prior to Company Rule.

Nine Mandalas. At the turn of the 17th century, nine political entities rule much of the oceanic continent now called Gandrasea. Within Gandrasea, these political entities spanned across the region of Sumatrea and the northern half of Tamirea, effectively controlling the production source of some of the most sought after spices and commodities before the rise of European dominance and Company Rule in the region. Portuguese presence is marginal, the Spanish are unable to break into the monopoly despite their recent capture of the northern Miniras, and the Flemish East Indea Company is still in its exploratory stage in mapping the furthest reaches of the region, all the while the British bide their time.

Rings of powers. Mandalas are a way of referring to political leagues or blocs in which power radiated from maritime-based city-states. Unlike formal empires, mandala rule was based on large degrees of local autonomy, balanced cultural hegemony from the core city-state. But they were also more than military alliances, and tributes and regional tariffs and trade policies were the norm.

Indean origins. This form of political relation stems from contact and cultural diffusion from nearby Indea. In fact, it was the Chola invasions and explorations of much of Sumatrea and northern Tamirea that led to the establishment of such a dense and complex network of regional trade. Indean exploration of the eastern Emporic followed whiffs of cloves, nutmeg, and sandalwood, leading them to go beyond the spice-adorned isles of the Malukus all the way to Tamirea and its vast interior Chandara Sea, as well as beyond the ocean to a new frontier marked by the Rovianas and Solomas.

Cultural legacies. Despite Flemish dominance in much of the region in the 18th century and eventual British takeover in the 19th century, much of the territorial and cultural divisions of the former mandalas remained largely static, even when they were grouped into colonial presidencies with new political centres or cores. A lasting legacy from the Mandala Period, for example, is that religious patterns of Hindu and Muslim sects, as well as literary traditions, can all be explained from the cultural connections made during tis period. Foodways and agricultural techniques also spread during the period. Hardy staple crops were brought over to Indea from the drought-prone areas of Dinataga and Irini, and in exchange, advanced irrigation techniques from Rajputana made it over to much of Tamirea.

Support this kind of content. To access in-depth lore and footnotes, or to download a high resolution print-quality version join the Patreon! Your funds will go to supporting future collaborations and commissions for Atlas Altera.
Threadmarks
Reader mode
You must log in or register to reply here.
Top
Share:
Share
Top