A space-focused timeline by Workable Goblin and e of pi. The PoD is a NASA decision to focus on space stations post-Apollo instead of developing the Space Shuttle, resulting in extensive leverage of Apollo-heritage hardware and technology.

The final timeline, consisting of Part I, II, III, and IV covering from the end of Apollo to the “present” in 2015, was completed in September 2015.

Old updates and comments can be read on the forum here, and the authors are always interested in questions or comments.

Spacecraft and Launch Vehicle Technical Data - A database of technical information on some of the launch vehicles and spacecraft mentioned in the timeline.

Mission List - Work in progress, a listing of major manned and unmanned missions covered in the timeline.

Media - A home for images related to the timeline, both canon and fan-created (or both).

3D Models - Source .blend files for 3D models of the spacecraft of the timeline.

In addition, Eyes Turned Skyward has received the Atomic Rockets Seal of Approval from Winchell Chung, who says:

“It's the sort of thing I'd be writing, if I was a real engineer, instead of just playing one on the internet.” 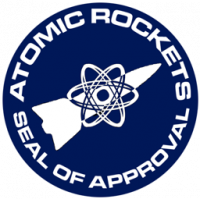