Land of the Supermodels 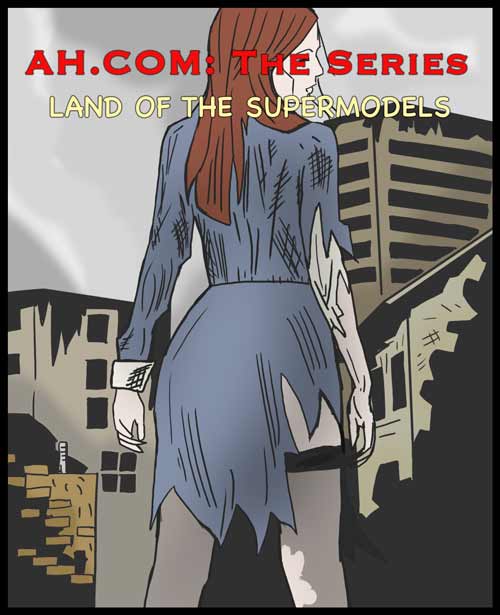 It starts with the crew finding an Earth where American and Canadian civilization has been destroyed, and where 85% of the population that still remains is made up of young women. Naturally, the crew instantly fights for a place on the away team (who eventually consist of DR. WHAT, WEAPON M, MBARRY, PSYCHOMELTDOWN, and GBW. Shuttling down to the planet and landing near the ruins of Sault St. Marie in Michigan, the crew quickly finds that all is not as it seems…. gnawed bones litter the ground everywhere. HERMANUBIS makes a brief appearance, only to be eaten by a pack of feral ALYSON HANNIGANs. More cannibal celebrities appear and capture the shuttle (and presumably eat GBW), and the rest of the team is forced to run. They appear at a fort manned by the local version of WEAPON M and his militia, who save them from the pursuing supermodels. There, the team discovers that the local version of DR. WHAT is responsible for the hordes of cannibal celebrity women everywhere, and they fly to his laboratory, barely escaping the final destruction of the militia compound by the celebs. At the laboratory, the crew finds that DR. WHAT has died (while performing oral sex, of course) and the place is being run by a demented bald hunchbacked dwarf… LUAKEL (one of his first appearances in the Series). After DR. WHAT manages to link LEO CAESIUS to the lab's computer, the celebs are stopped, LUAKEL is killed, and the team barely escapes again as the lab self destructs. Back at the shuttle, the crew finds that GBW saved himself by locking himself in a freezer compartment. All is well, except that PSYCHOMELTDOWN doesn't get the girl (Alyson)….

Interestingly, LUAKEL appeared in this episode because he was teasing Dave Howery on one of the Chat threads, and Dave threatened to put him in the Series… thus, the result. This episode was set near Sault Ste. Marie because HERMANUBIS had requested a couple of times to appear in The Series, and Dave obliged him. This was the first of several episodes he wrote that was set near that town.

This episode was a sendup of those “Living Dead” movies, with a couple of touches of Aliens thrown in for good measure.