Gukpard said:
So, I'm quite frustrated since After The End Fan Fork has all pagan religions reformed, there is any submod that makes them be unreformed instead?
Click to expand...

What are you talking about? After the end has plenty of unreformed religions.

Razorfloss said:
What are you talking about? After the end has plenty of unreformed religions.
Click to expand...

Strange, so what is wrong with my version? Can you pass me the link of the "normal" after the end version?

My guess would be localisation. If you don't tell the game that k_palestine is supposed to be called palestine, it will show k_palestine. Think it's pretty easy to find on the wiki.

I asked the devs why they used the "Europabund" name, this is their reply

I asked the devs why they used the "Europabund" name, this is their reply

Which mod is this?

Godwin said:
Which mod is this?
Click to expand...

No, it is New Era Old World, which has a similar premise (it began as a spin-off) but is set in Europe, North Africa and Asia.

Godwin said:
Which mod is this?
Click to expand...

Lord Insane said:
No, it is New Era Old World, which has a similar premise (it began as a spin-off) but is set in Europe, North Africa and Asia.
Click to expand...

Yep. The mod originally began as a spin-off of After the End that imagined what Europe could look like while the Americas were having their thing. A sign of this can be found in the fact the British follow the Thelema religion that the Red Coats have when they land in AtE. Eventually though, it diverged and became its own thing as After the End pretty much decided to have its own canon and to leave what was going on in Europe vague.

Never tried the mod but there seems to be a similar level of creativity as that of After the End. There is faith called Novelism in France for example that holds every novel published to be a Holy Book, from the Three Musketeers to Lord of the Rings. There is a neo-pagan Hellenic religion that believes Zeus got overthrown by his son as foretold, that son being Anaxagoras (aka Alexander the Great). Yugoslavia has risen again. Russians have a Commie religion which worships Staline as a god. The Haspburgs are once again ruling Austria. And probably a lot more that I've missed.

Ladies and gentlemen, I just had the bloodiest campaign in my life playing CKII, sadly due the three images per day limit I gonna post it here by parts. I did this campaign in the "New Era, old World" mod


So, for a start and to save some prints, I began as post apocalyptic hellenistic greece and united the country and then reformed the hellenistic faith going for a dogmatic and warlike faith

My leader began mass terror campaigns against neighbouring states to get people to do sacrifices, until I had done so many that I opened a way to form a bloodline, I took the "Macabre banquet", I never had seem that before

Basically this allows you to sacrifice people and use their bodies as ornaments of your castle, I don't know if that is in the original game. At that point I just kept looting everything I could to sacrifice as many people as I could, until it got to the point that I had sacrificed 87 people, going as far as to murder my own daughter as a sacrifice for +20% morale damage

And then, I got enought captives to do this

YES! I hurt hardly my economy by ordering all the counties to do mass human sacrifice for 30% increased morale and 2% moral authority

AND WHY? WHY WOULD I DO THAT IF THAT IS ONLY HURTING MY ECONOMY?

Because my main character is insane! Insane! INSANEEEEEEEEE!

Gukpard said:
Ladies and gentlemen, I just had the bloodiest campaign in my life playing CKII, sadly due the three images per day limit I gonna post it here by parts. I did this campaign in the "New Era, old World" mod

Because my main character is insane! Insane! INSANEEEEEEEEE!
Click to expand...

Alright, I'm sold. Where can I get this mod?

Oxander said:
Alright, I'm sold. Where can I get this mod?
Click to expand...

Do you have steam or discord?

Gukpard said:
Do you have steam or discord?
Click to expand... 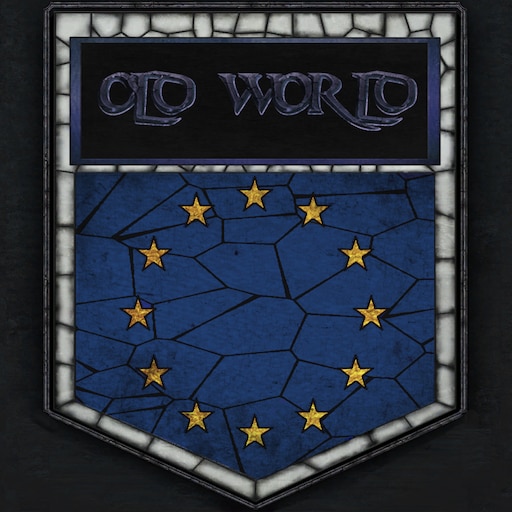 If you get active enough in their steam you might get the privilege to play their Asian beta. I got it but have not tried yet.

I don't know, the 769 start allowed me to create my World Superpower Reformed Germanic Empire of Scandinavia (pictured in 1296): 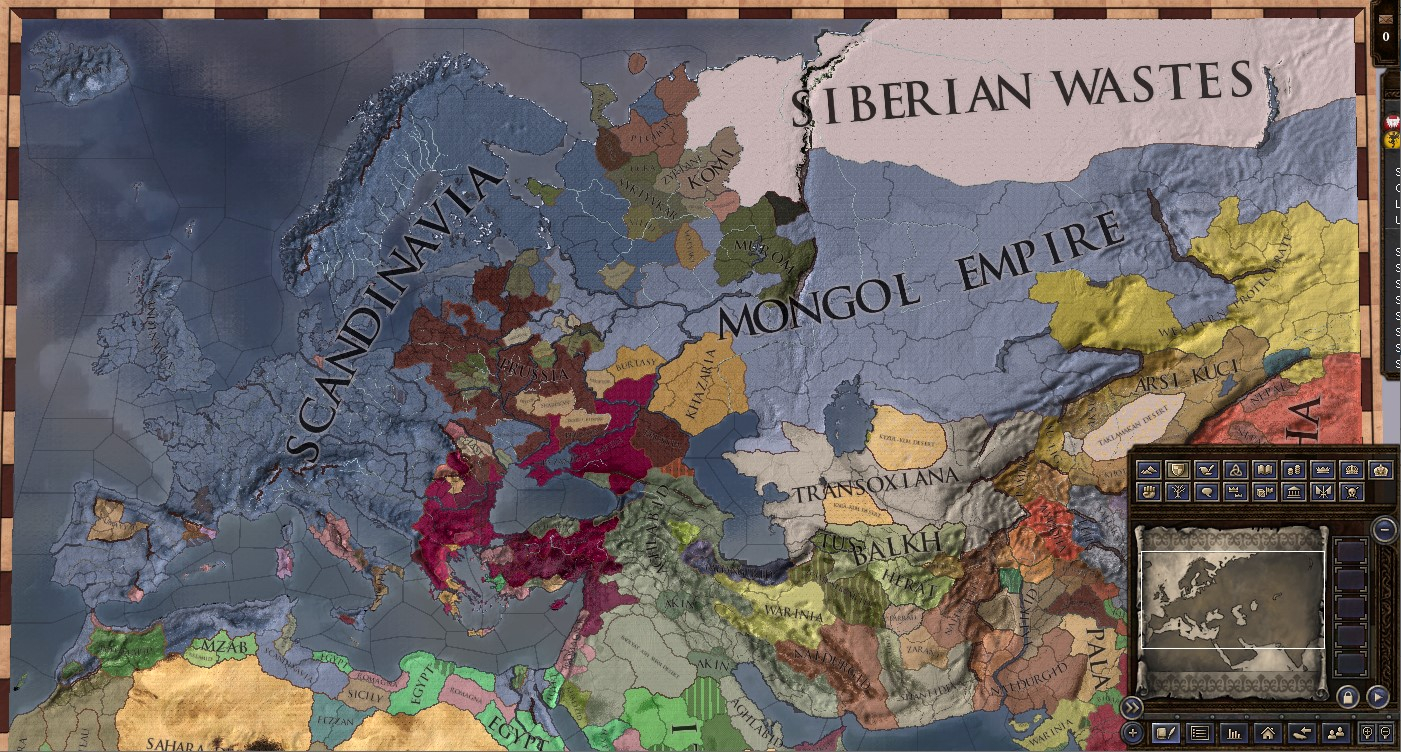 GJohn902 said:
I don't know, the 769 start allowed me to create my World Superpower Reformed Germanic Empire of Scandinavia (pictured in 1296):
View attachment 778586
Click to expand...

My God this is so blursed, congratulations

Gukpard said:
My God this is so blursed, congratulations
Click to expand...

thanks lol, this was by far my best-ever CK2 game. A brief rundown of my game:

Started by uniting Sweden, took a few other religiously strategic bits to reform the Germanic faith, then consolidated the rest of Scandinavia under my rule. Next was the slow but steady conquest of Britain and Ireland in the 800s, then grabbing huge chunks of Western Europe in the 900s/1000s through offensive Great Holy Wars (and holding on to said parts when the Catholics attempted to roll back my gains in Crusades). My vassals launched several successful prepared invasions, extending my gains into Italy, Egypt, and North Africa. (I eventually granted independence to Italy and Egypt to ward off a serious vassal revolt)

With a massive empire and unshakable 100 moral authority, most of the remaining pagan nations converted to the Reformed Germanic faith. It is now the known world's dominant religion, followed from Spain and Iceland to Mesopotamia and Central Asia (the Mongols in my game converted to my religion).

The Byzantines (still Orthodox as always) is the only major Christian nation remaining (and one I will never directly mess with as long as they keep the Varangian Guard around, why trash a country that willingly gives my empires' elites free military training. Plus I know they'll never launch an offensive Crusade against me), the Catholics have been wiped out (Pope's still floating around somewhere in Italy though and is laughably still trying to organize Crusades to take back Rome, only to cancel them due to lack of support. I wonder why lol). The remaining Muslims (bits of North Africa and the Middle East) are divided between Sunni, Shia, and about 5 different heresies. There are still Sunni and Shia Caliphs floating around who will declare jihads to take back Arabia (a Reformed Germanic state currently controls Mecca). They don't work. Meanwhile Persia and the non-Mongol parts of Central Asia are divided into a bunch of Hindu and Buddhist states that pose no threat to my empire.

Can't directly grow any more through conquest without literally triggering a World War against me because my threat level has been between 90-100% for the last 150 years. Luckily my many vassal kingdoms can still grab up land on my behalf.
You must log in or register to reply here.
Top
Share:
Share
Top