Maps from this post. Democrats get a bigger win in 1964 and do more, Nixon still gets the nomination in 1968, things happen a bit different with the halt to bombing in Vietnam and potential peace deal - and Nixon's role in seeking to sabotage it - happening a few weeks earlier, Humphrey goes public with the revelations of this, and Nixon ends up losing big 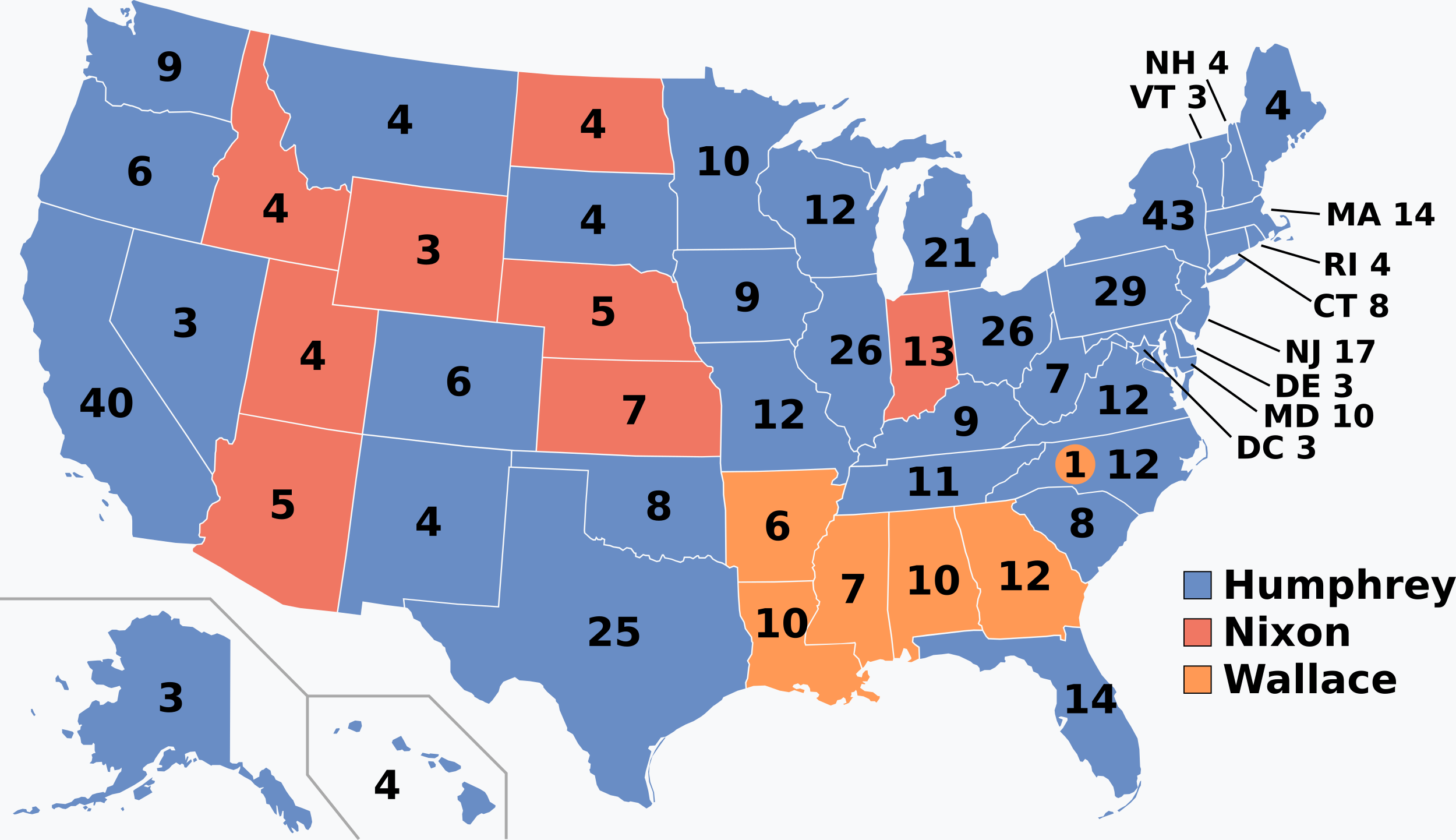 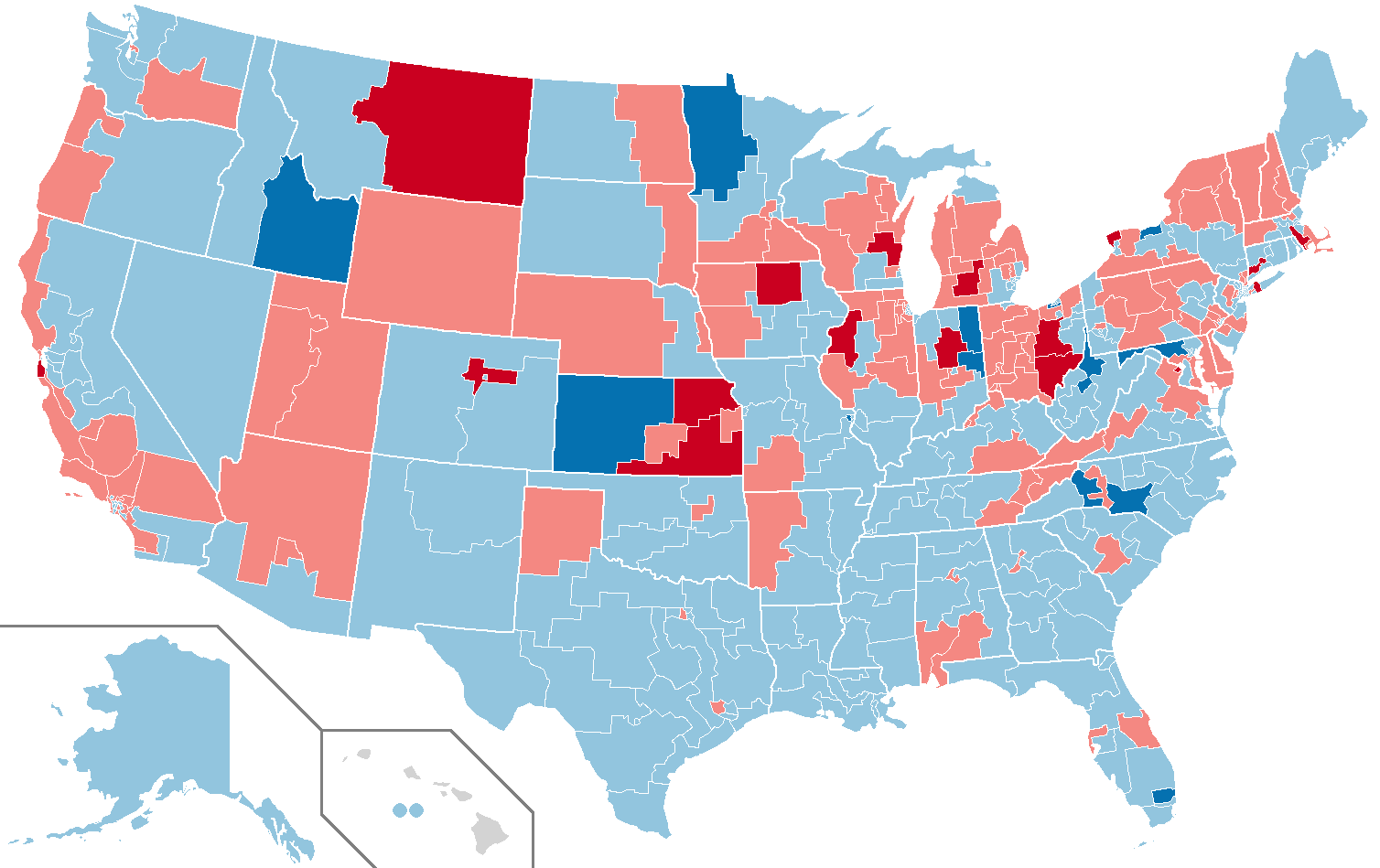 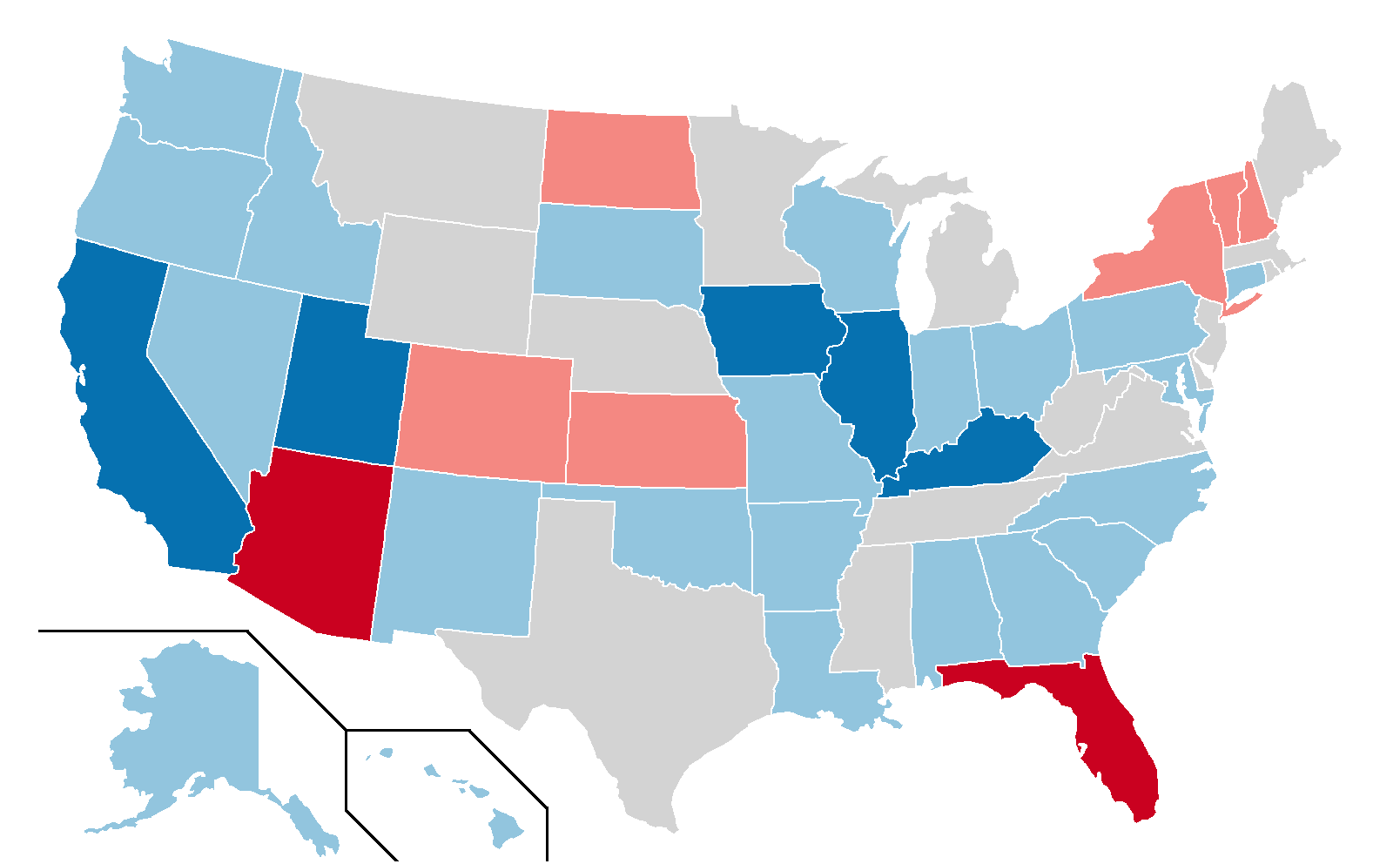 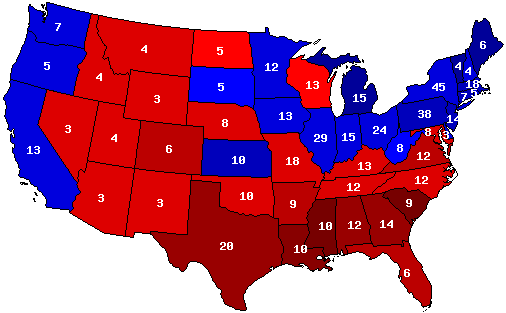 Thanks to the strong Wilson vote in the West compared to La Follette eating away at Coolidge's vote, it makes for something that resembles one of William Jennings Bryan's election defeats (aside from La Follette's home state of Wisconsin). 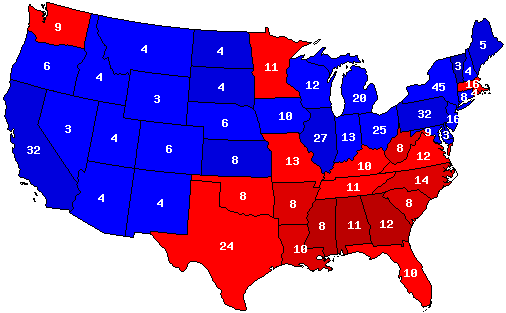 So yeah, despite less than 1% between him and Stevenson, Dewey wins by a bigger margin in the Electoral College than Coolidge. (I should mention these are meant to be shaded by the winner's OTL voteshare, but I miscoloured California and Illinois, they should be in the 40% colour not the 50% one.)
Last edited: Dec 28, 2020

Leave/remain what? I cant see the US joining the EU anytime.

The cravinator said:
Leave/remain what? I cant see the US joining the EU anytime.
Click to expand...

I suspect it’s for NAFTA

EYates said:
I suspect it’s for NAFTA
Click to expand...

Probably. But it's rather flawed in that. Texas would be more Remain, and the Midwest more thoroughly Leave. I suspect that the map would not follow Dem/Rep party lines too much at all.

TimTurner said:
Probably. But it's rather flawed in that. Texas would be more Remain, and the Midwest more thoroughly Leave. I suspect that the map would not follow Dem/Rep party lines too much at all.
Click to expand...

TimTurner said:
Probably. But it's rather flawed in that. Texas would be more Remain, and the Midwest more thoroughly Leave. I suspect that the map would not follow Dem/Rep party lines too much at all.
Click to expand...

Yeah, I suspect you'd probably see a lot of weird results influenced by local politics, like North Dakota voting Remain because of the oil boom involving cooperation with the Canadian government and the districts along the Mexican border which have a large white or conservative Hispanic population voting Leave. 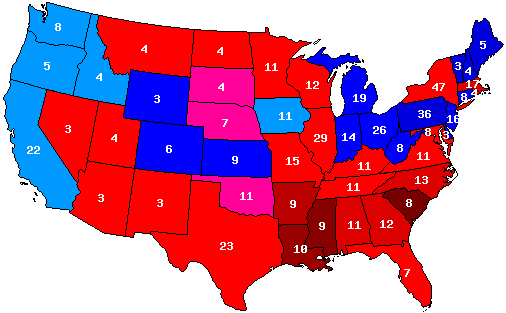 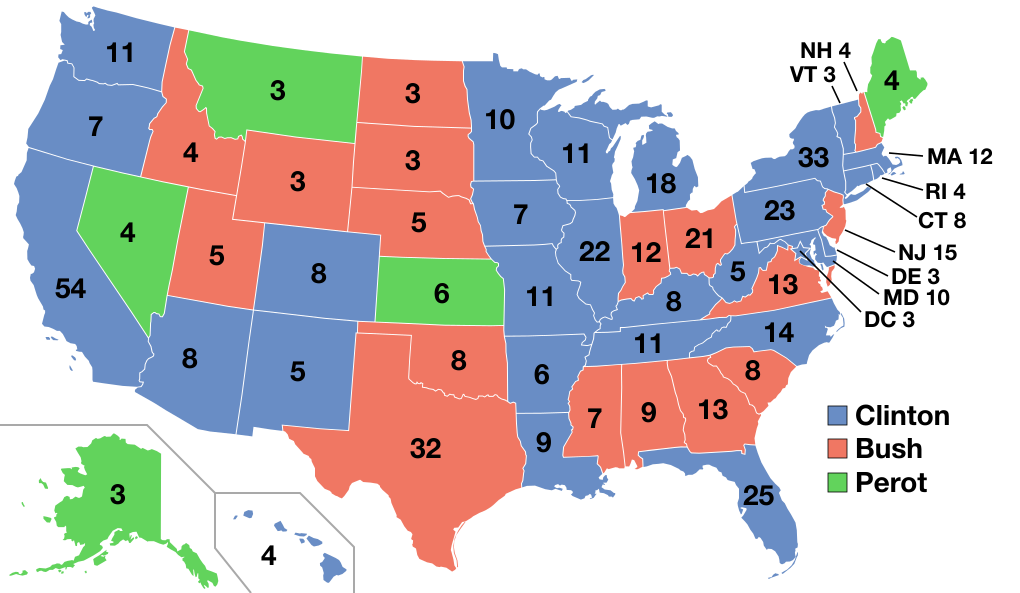 Similarly, here is 1992 if Perot gained 10% of votes cast in each state, gaining 5% from Clinton and 5% from Bush evenly. Again, not much changes despite such a large swing to Perot - Clinton still wins and since the losses are even for him and Bush, he even gains electoral votes compared to the above scenario. Perot only manages a 15 EV gain from the above scenario, despite the +10% swing here. 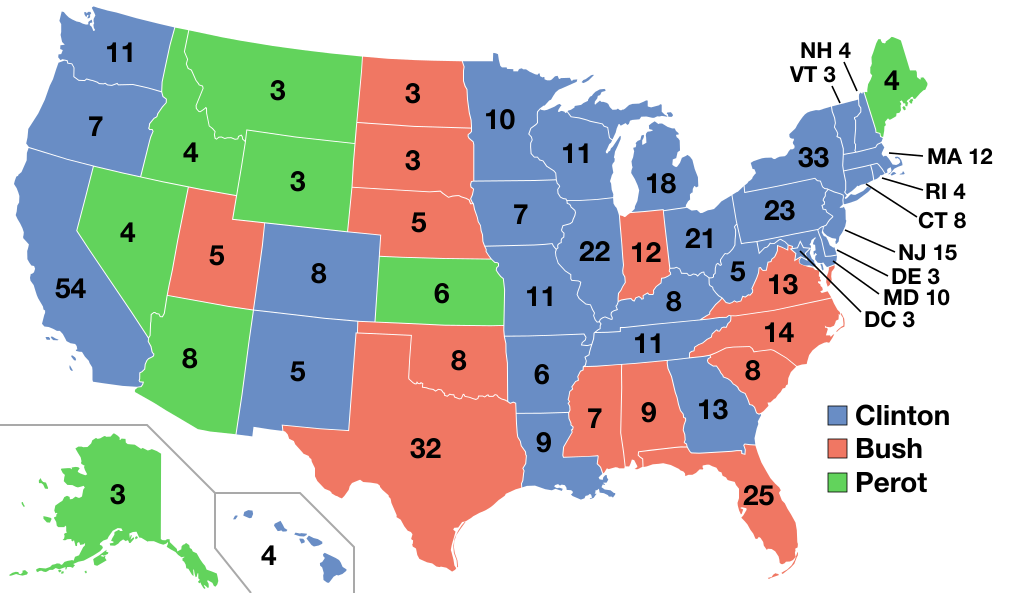 I'm going to tinker with numbers for 1992 one more time and then call it a day, promise.

Okay, here is the last one for today. I decided to apply different swings to different regions. I decided the different swings before actually applying them, but was pleasantly surprised by the results. I determined them kinda randomly, kinda on my own intuition. A not-always-followed rule was that areas were Perot did better saw larger swings to Perot, and the winner of a specific region tended to lose more votes to Perot (Bush lost more in the swing in the Mountain West, Clinton lost more in the swing in the Pacific). I've put the specific swings below in a spoiler. 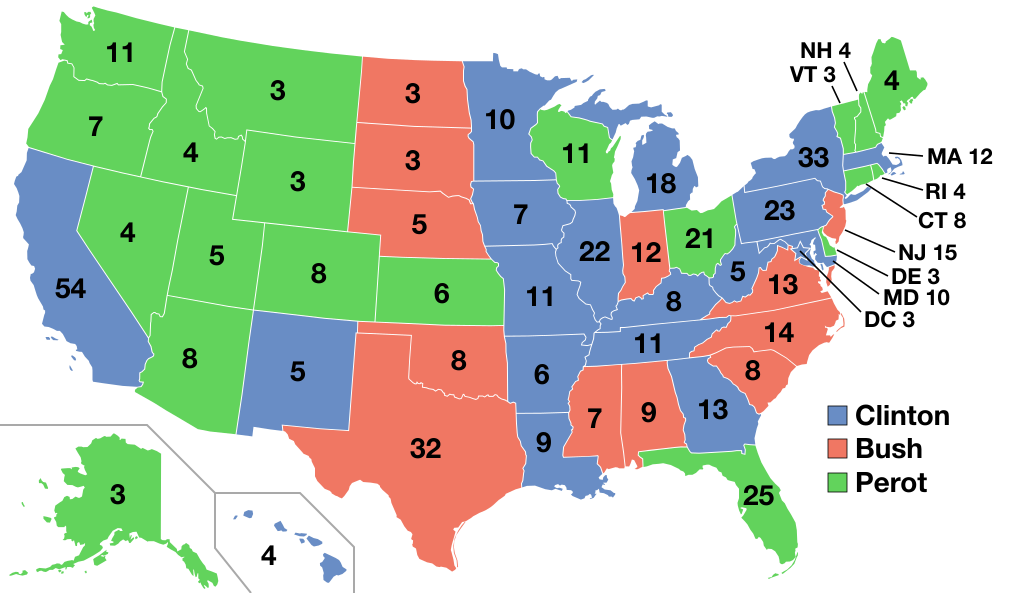 Anyway, that's all for today. Why did I do this? As always, not even I know. 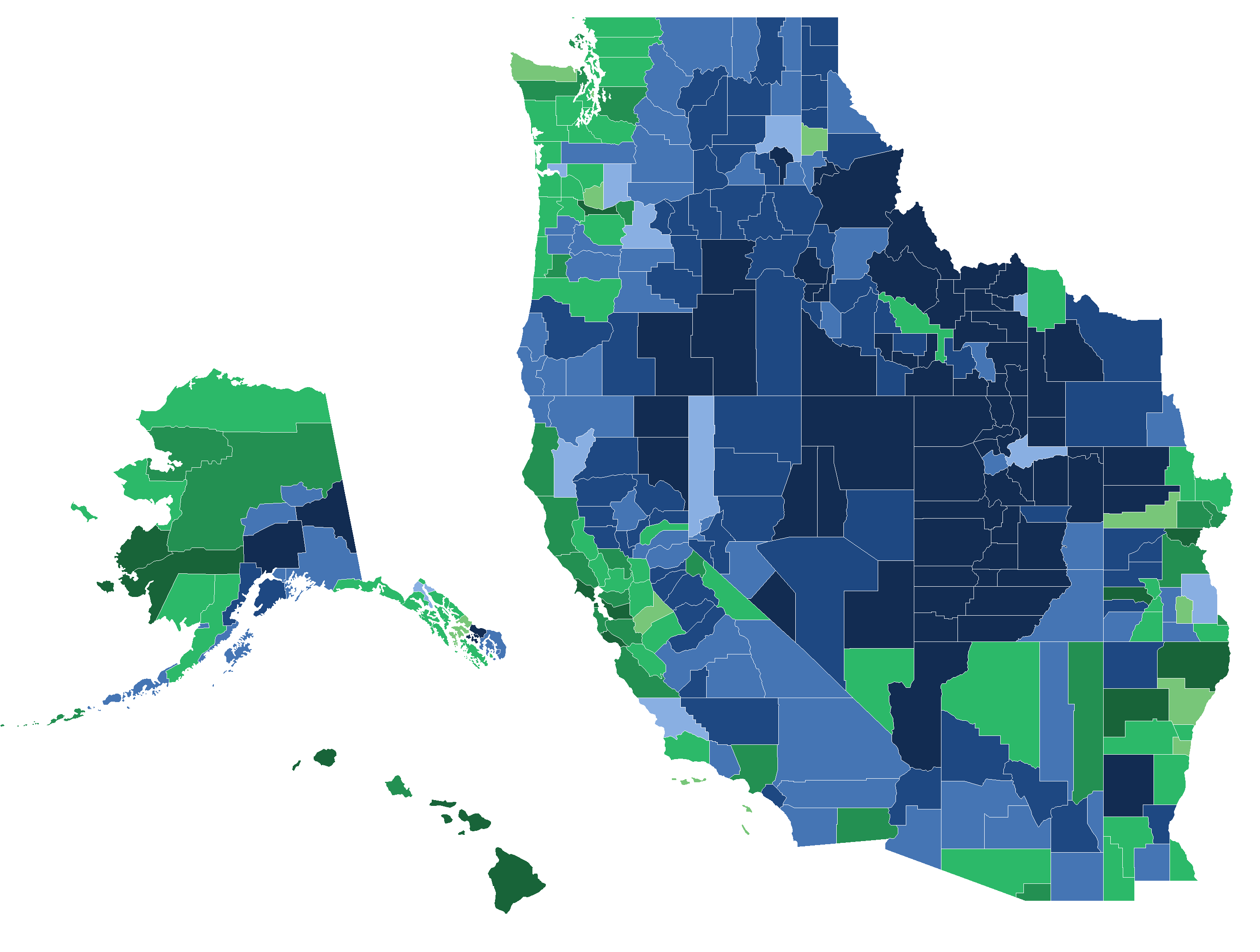 An election based on this infobox I did a while back. (The basemap is adapted from one by AJRElectionMaps.) 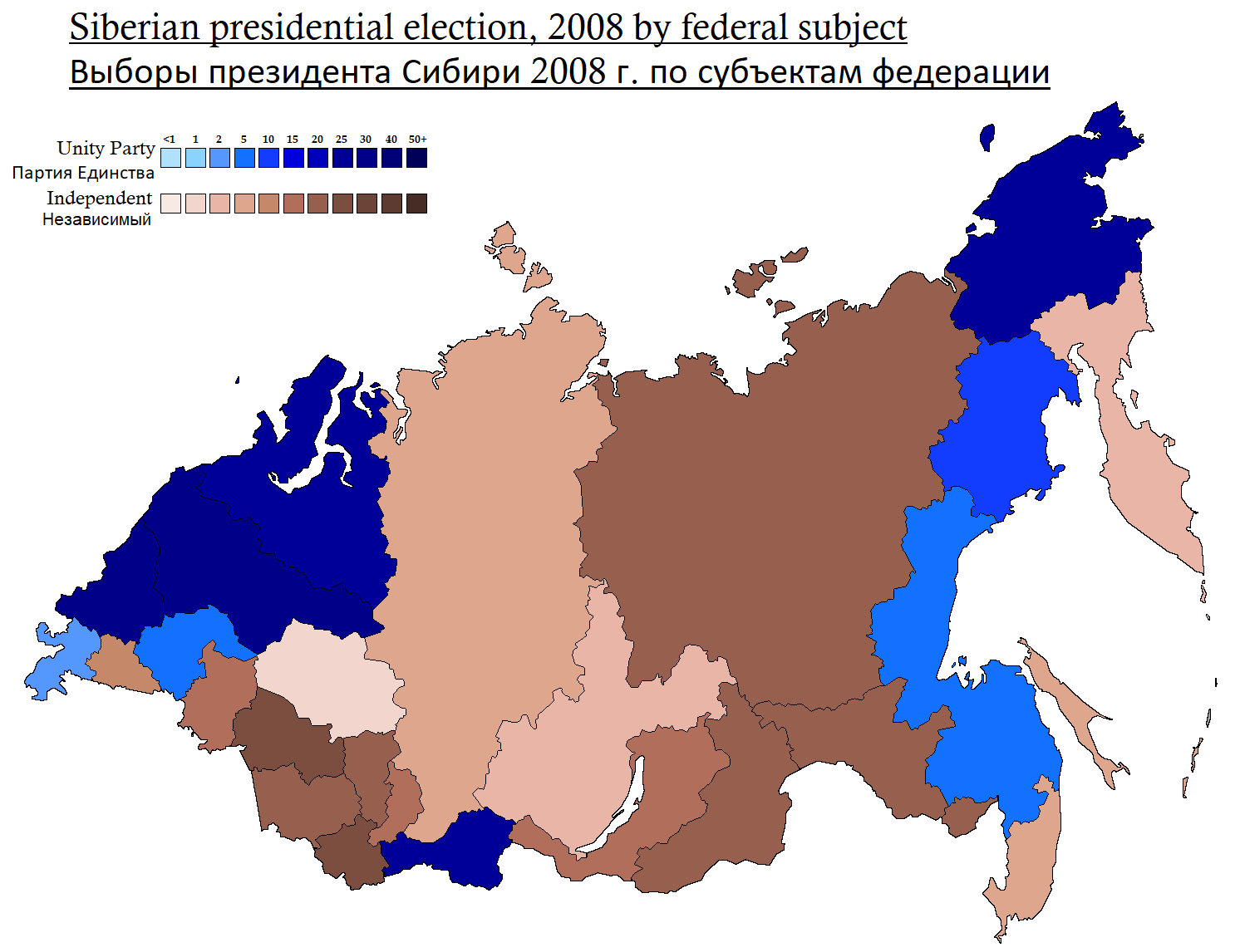 The 2008 Siberian presidential election was a contest which saw greatly unusual circumstances. The incumbent president, Vladimir Putin of the Unity Party, was de jure term-limited out, having served two terms starting in 2000 having been elected to succeed Siberia’s first President, Boris Yeltsin.

Despite this, the nomination process for the Unity Party to find a successor to Putin was fraught. For starters, since democratization the Unity Party’s dominant status in Siberian electoral politics had led to considerable amounts of corruption and steadfast tribal support for Yeltsin and then Putin, with voters rallying behind them and their party out of distaste for the Communists (who were seen as dangerously anti-democratic and anti-reformist due to their hardline former compatriots in the old west of Russia). Perhaps unsurprisingly, Yeltsin, Putin and their allies had used this considerable public trust and power to enact a free-market oriented reform programme with limited regard for keeping public spending in areas badly hit by globalization consistent, since most of those regions voted Communist.

In the early days of democratic Siberian politics, the Russian border, the north, the Urals and Novosibirsk had been firmly pro-Unity while the poorer southern ‘red belt’ that bordered Mongolia and China favoured the Communists. This pattern held true until 2008, but that election proved dramatic and seems to have been a realigning election; public opinion in Novosibirsk and the Urals started to turn against Putin as his methods seemed to turn undemocratic. With the support of the Unity Party’s caucus in the State Duma, the term limits were repealed and Putin stood for re-nomination to a third term in the primary.

That primary is something important to look at- in the early days, winning the Unity Party primary was considered tantamount to election in Siberia, and it was thought of thus when Putin faced off against Boris Gryzlov, one of his deputies, in what was widely regarded as a paper campaign. Gryzlov only really started to up the ante for his campaign when it became clear Putin was becoming a liability and many Siberians saw him as potentially dictatorial, and by that point it was too late- Putin won the nomination with 54% of the vote to 46% for Gryzlov, mostly owing to his personal popularity among the Unity Party’s membership outweighing their fears of defeat.

The Unity Party was hardly going to rally behind Putin without a second thought, though- far from it. While plenty of its members were devoted to the nationalism and conservatism that under Putin’s leadership had started to characterize it, one of the main appeals of the party was that it wasn’t trying to foster dictatorial rule as the Communists (accurately or not) were thought to. Consequently, its decision to re-nominate Putin in such questionable circumstances started to turn a big faction of it towards opposing Putin.

However, the opposition had a problem: as long as the strongest party was the Communists, and their nominee was the foremost opponent to Putin, it would be nigh on impossible to convince voters to support them as the more democratic choice than the Unity Party. Taking this into account, the opposition parties tapped a unity candidate of their own - Garry Kasparov. Kasparov, a former world chess champion who famously played against the supercomputer Deep Blue, had recently shifted his focus towards politics, becoming a strident opponent of the conservatism and authoritarianism of the Unity Party under Putin.

Kasparov benefited from a number of factors- the general implosion of the Unity Party over Putin’s nomination was one, but it also helped that his policy agenda was fairly nebulous and he mainly focused on cleaning up the corruption of the Unity Party governments and restoring ‘democracy with honour’ to Siberia, a slightly more coded way of promising the restoration of term limits. Doing this not only allowed him to court former Unity Party supporters, but also avoided alienating the centrists in Yabloko or the Communists on the left by promising too much or not enough interventionism.

In the down-ballot elections, Kasparov also managed to organize an agreement in which neither Yabloko nor the Communists would be allowed to have a member as Prime Minister, but both must be represented in the executive. He would later comment that ‘I knew I was getting myself in for infighting, but that was not the important thing at that point- the important thing was getting rid of Putin before he became a true tyrant’.

In general, the Siberian public agreed with Kasparov. On election day, not only did he trounce Putin with 52,6% to 42,2%, but in the legislature the Unity Party lost their majority for the first time ever and his coalition took control of the State Duma. On top of this, considerable shifts away from the Unity Party were seen in keeping with the shift in public opinion- while the south went for Kasparov and resisted the temptation to bolt for continuity Communist nominee Nikolay Kharitonov (generally considered a weak and extremist figure; just 4% of voters went for Kharitonov, and Yabloko pulled out of the presidential race altogether), Novosibirsk, the Urals and even bits of eastern Siberia went for Kasparov, with only a few greatly rural areas of the east and the regions bordering Russia sticking by Putin.

The situation quickly turned quite dire for Putin, and to a degree even the Unity Party altogether. With investigations against him and several of his allies proceeding, ultimately after Kasparov was inaugurated Putin fled to Russia to avoid criminal charges, with Gennady Zyurganov’s government providing him with legal protection (rather ironic considering Putin’s adamant anti-Communist views). Several other Unity Party figures like Gryzlov ultimately had to retire from politics due to the controversies.

Contrary to some analysts’ expectations, however, the Unity Party survived this catastrophic electoral fallout (by its standards, at least). It remained the largest party, and once it picked Dmitry Medvedev as its leader, he managed to effectively reunite it. The 2008 election may have been a landmark in how it ended the unbroken dominant party system of Siberian politics in its early years as a nation, but as it would soon become clear, it had not ushered in multi-party politics by any means.

Vote for me if you want to live! 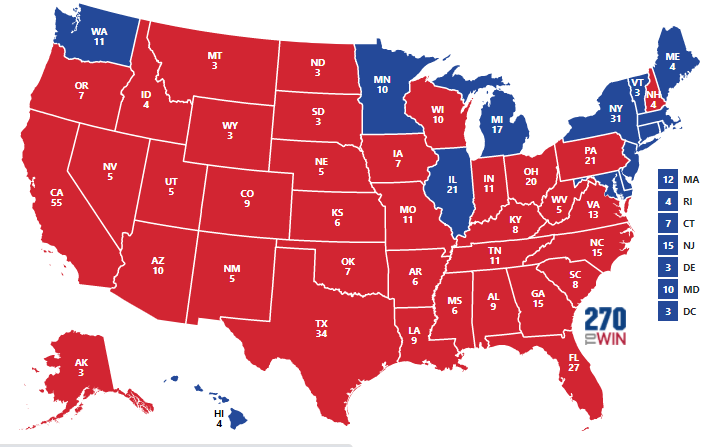 2016 election in California with alternate county borders. Margins may be messed up. 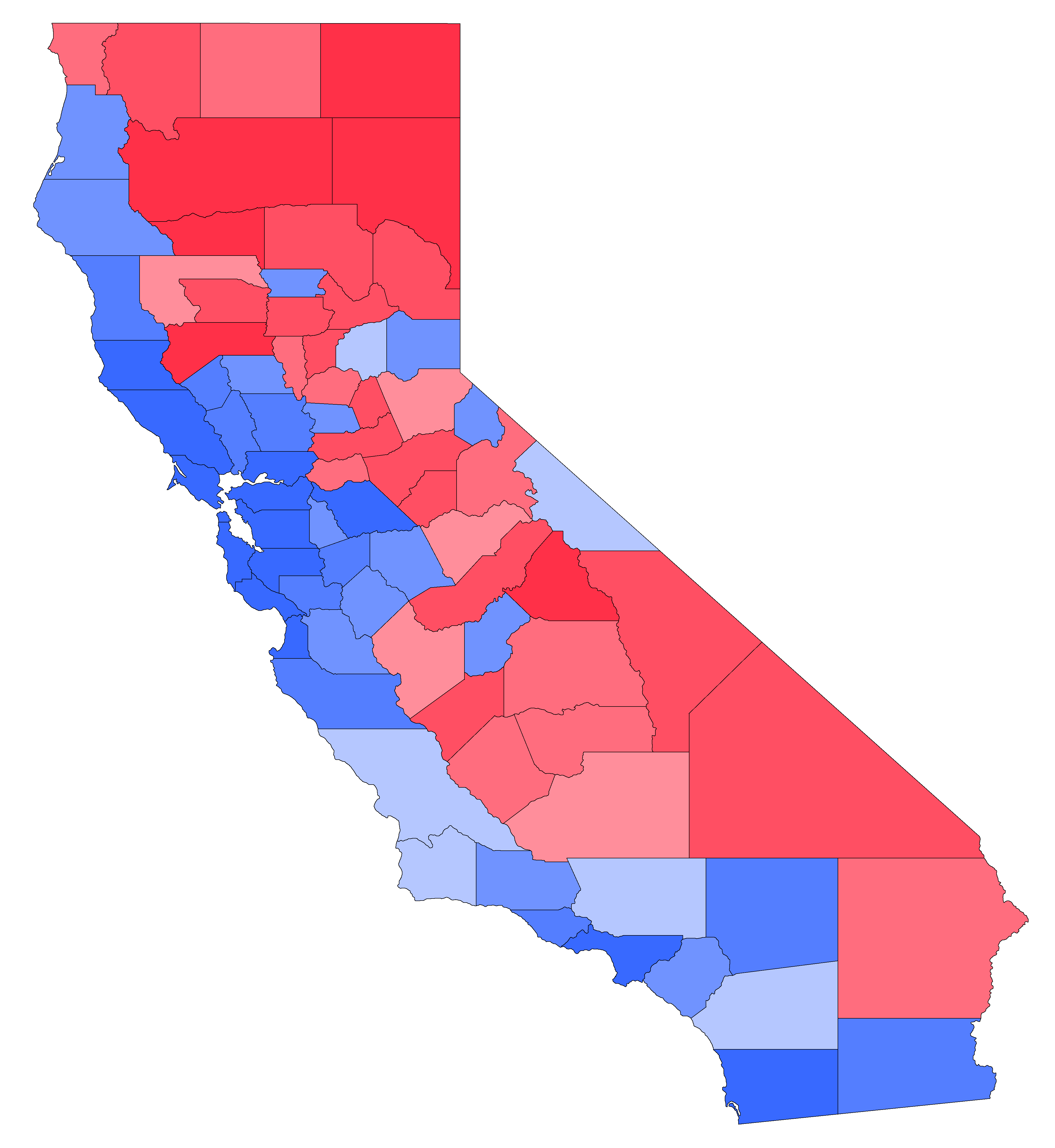 How did you come up with the geographic spread and individual results for this map?

Vespid said:
How did you come up with the geographic spread and individual results for this map?
Click to expand...

I found out what I wanted the statewide margins to be, and then usually shifted the county results from IRL 2012 pres election or other state elections (I used the 2010 CA Gov election for the South California results for example.)

RoxyLikeAPuma said:
I found out what I wanted the statewide margins to be, and then usually shifted the county results from IRL 2012 pres election or other state elections (I used the 2010 CA Gov election for the South California results for example.)
Click to expand...

So basically you just took irl elections and shifted things... what would you do if the political parties aren't neat parallels for Republicans or Democrats, or if there are three parties? 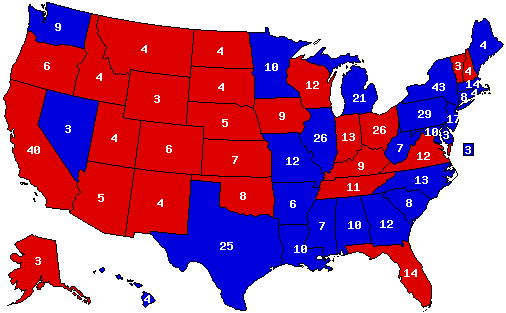 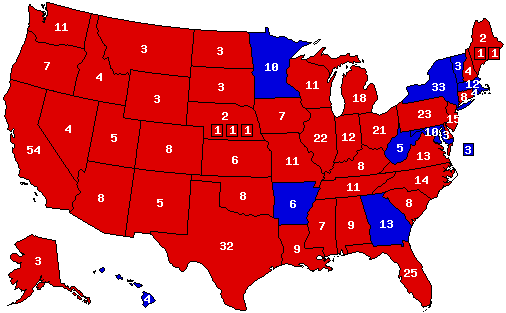