Retiarius said:
What year is this?
Click to expand...

Retiarius said:
It's not Wilkie, is it?
Click to expand...

nope, seeing as he passed 4 years before this election. He also founded a massive media empire that is still around to this day, albeit with different kind of ideological heads. If you think you know who it is, message me and I'll tell you if you're wrong or right.

I made these a while back, but have these maps of the 2010 and 2015 Chinese presidential elections by prefecture. 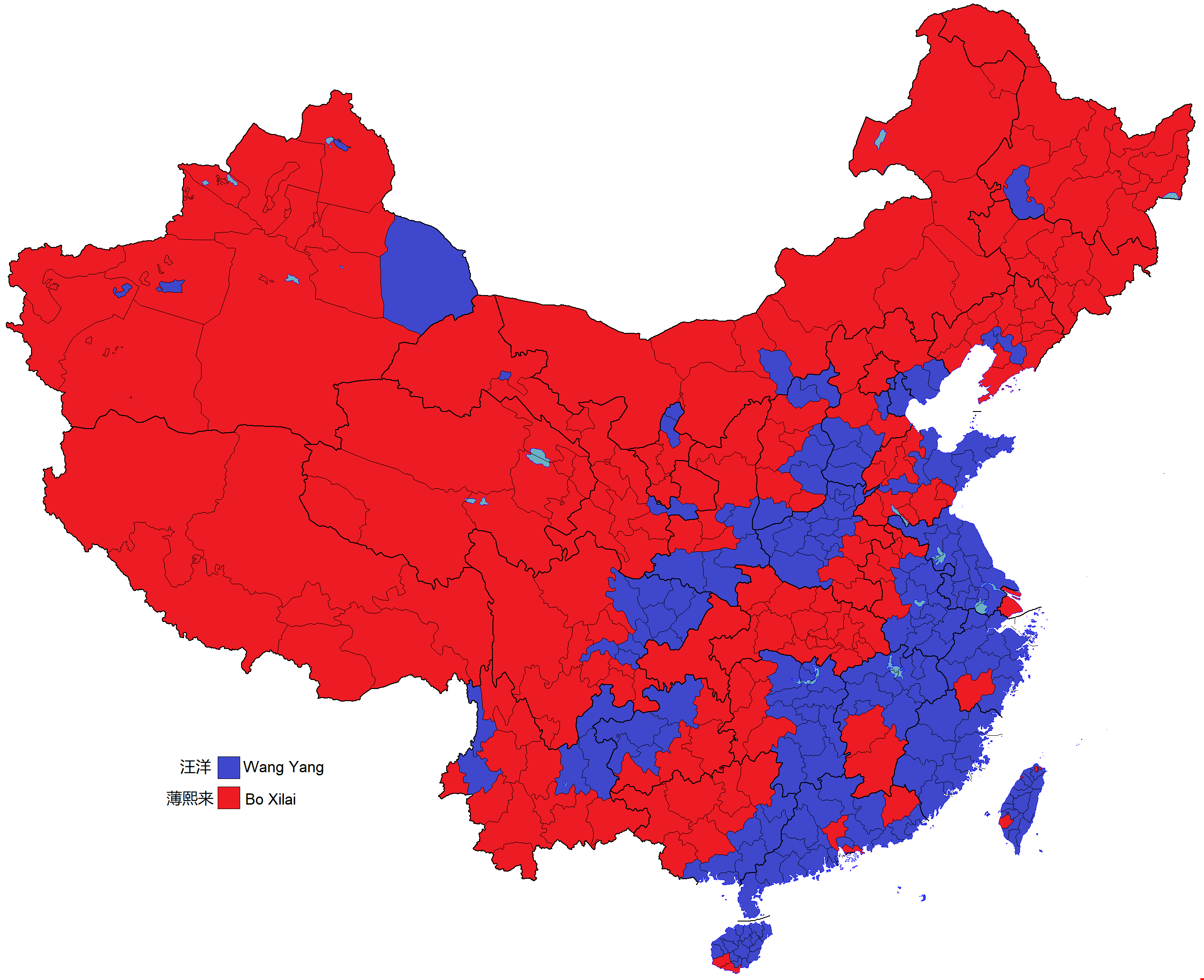 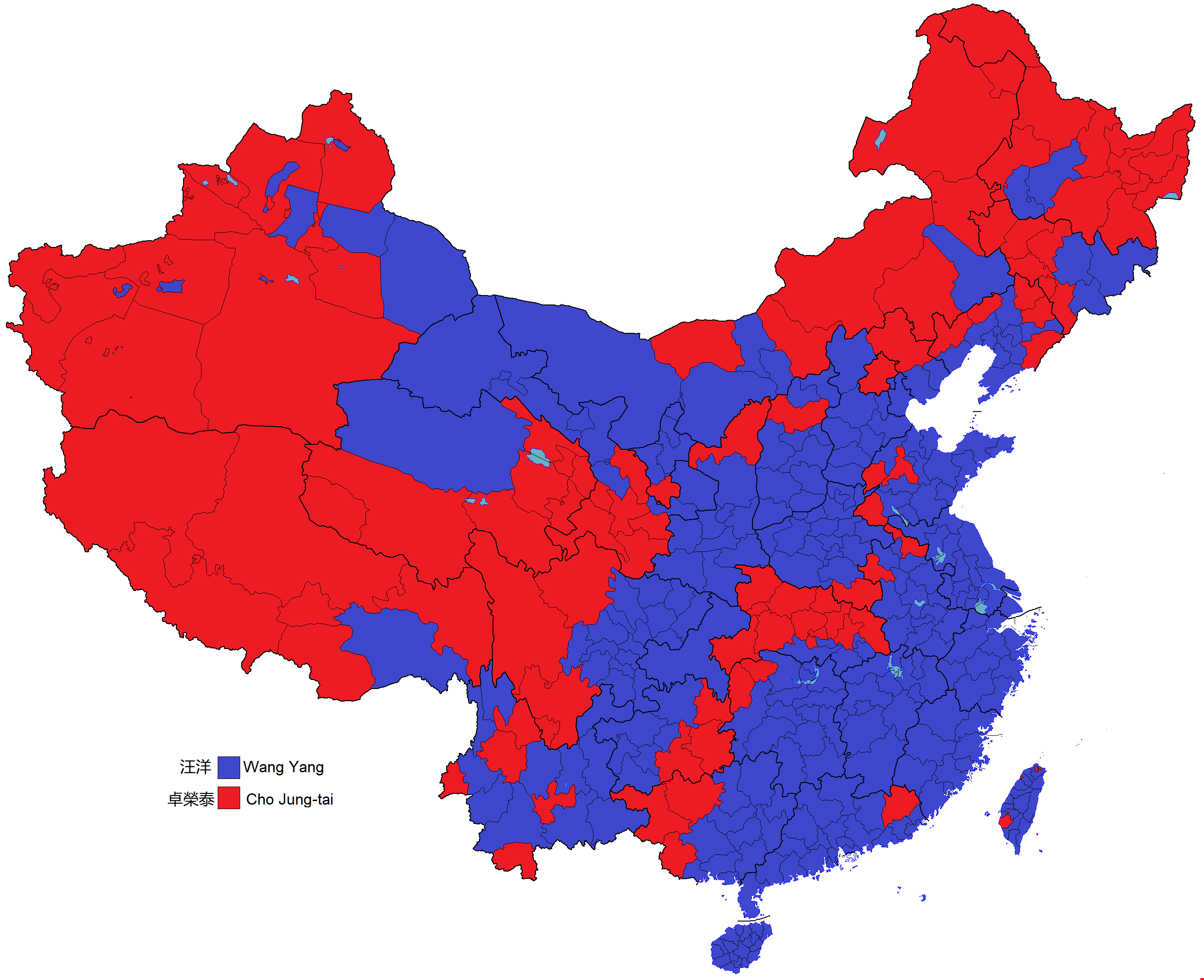 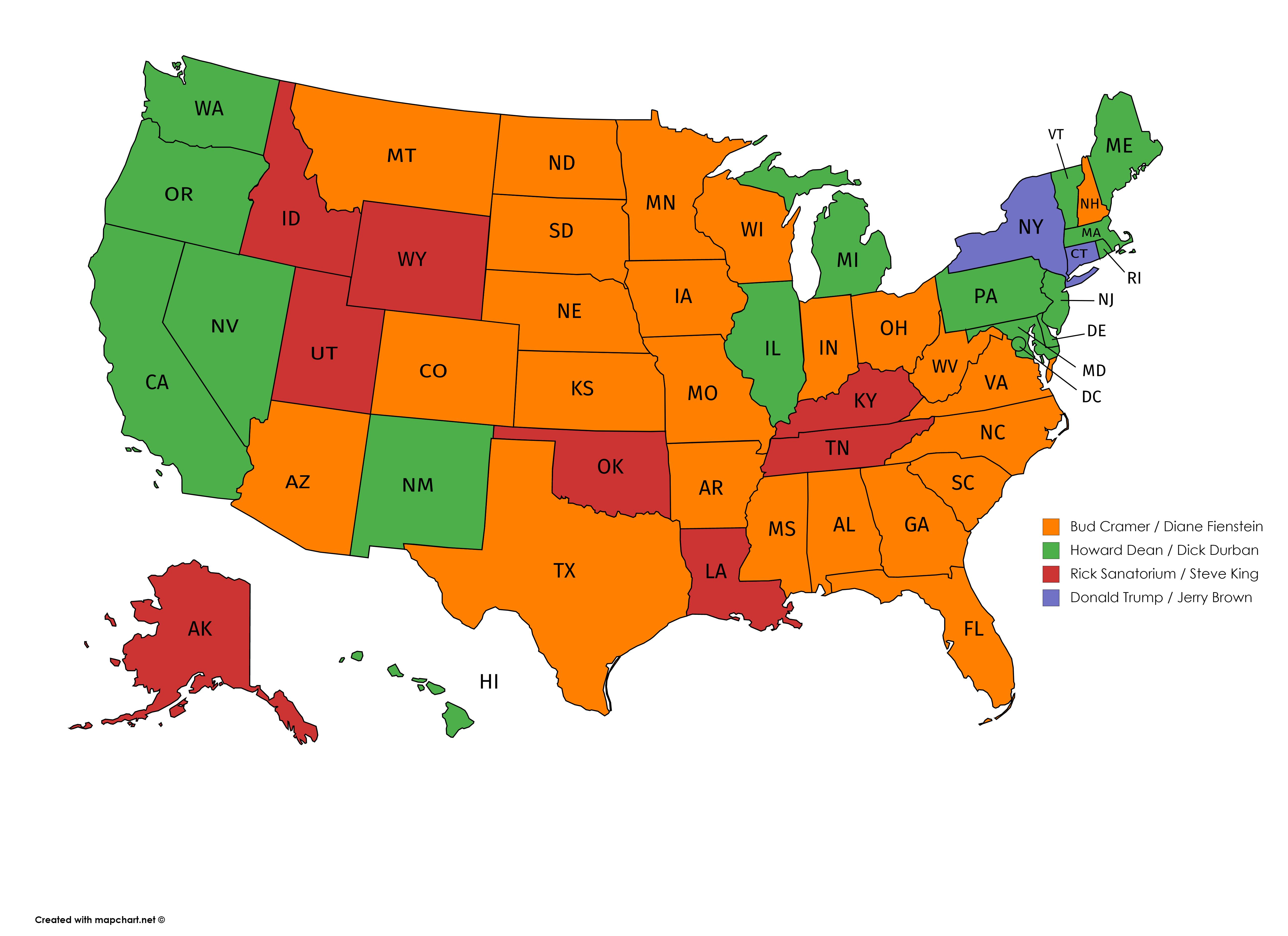 Elysium is an Earth colony on Mars with a devolved parliament. 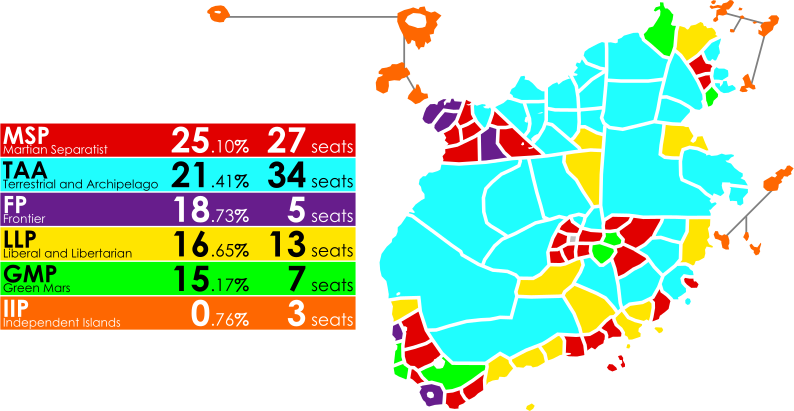 TAA are liberal-conservatives who want to remain under jurisdiction of the Earth ("or whichever country the colony is from") until they think it's safe to leave.
MSP and FP are the opposite and want to keep Elysium's resources for themselves.
Both the GMP and LLP are largely divided on the issue, and the IIP is a single-issue party wanting independence from both Elysium and the Earth, "possibly abstentionist although I'll have to check my notes".

Despite the MSP getting more votes, the TAA comes first in number of seats and forms a center-right coalition with the LLP. 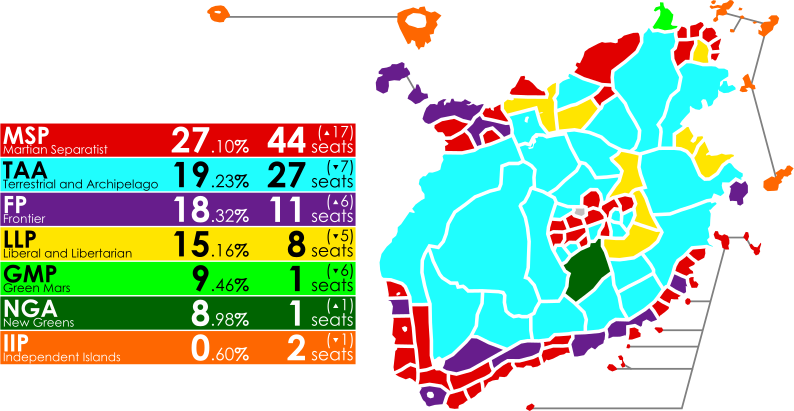 Here, the incumbent TAA and LLP government has attempted some gerrymandering (plus 5 new seats) that went "horribly wrong" and actually helped the opposition, giving the 2 largest separatist parties of large majority of the seats and handling them an easy government formation.
The greens collapsed from the last election due to their split between the GMP (eco-fascist) and the NGA (more moderate, more akin to the ones we have on Earth today). 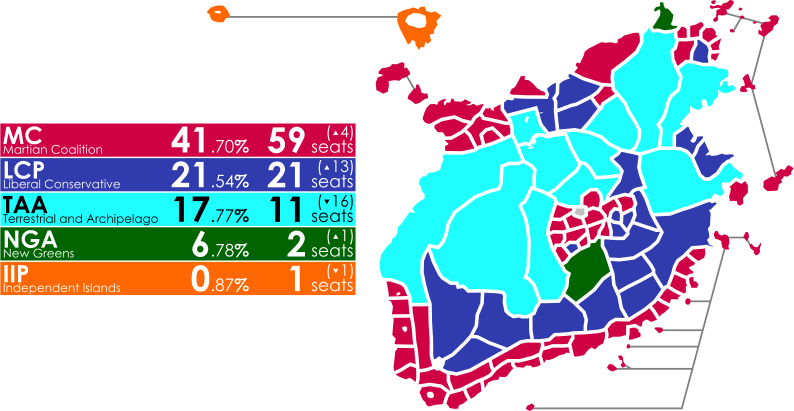 For this election, the Martian Separatists and the Frontier Party have merged as a single-issue party: the MC, promising independence from the Earth.
The LLP merged with tome TAA members to become the the LCP: they are also separatists, but also federalists and trend to the center-right.
The TAA is still loyal to the Earth; it is unitarian and also center-right.
The NGA are eco-socialist and federalist.
The IIP is still single-issue, wanting independence from both Elysium and the Earth.

"In the run up to the 2230 election, the Martian Separatists and the Frontier Party agree to officially merge their two parties together and run on a single-issue ticket of Elysium Independence. Meanwhile, the Terrestrial and Archipelago Party faces a split, as the more conservative members grow disillusioned with fighting the lost cause against independence. Joining forces with the recently dissolved Liberal and Libertarian Group, these defectors form the new Liberal Conservative Party, campaigning to ensure that any post-independence Elysium will be a capitalist one.

The Martian Coalition is a success, increasing their majority to 24 seats. The LCP also gains ground in the suburbs, overtaking the TRA by 10 seats and becoming the new opposition. After five years of preparation, the stage is set for independence."

DPKdebator said:
View attachment 565538
Here's a map I made of a hypothetical party system in an independent New England. I kept the parties somewhat simple, with four major parties and one minor one. The Progressive Party is a pretty standard left wing party, advocating for social liberalism, government intervention in the economy, and various government programs. The Commonwealth Party is the conservative party, in favor of the free market and rather socially conservative, albeit not as right-wing as the US Republicans. The Solidarity Party is a populist working class party that supports similar economic protections as the Progressives and has similar social positions as the Commonwealthers. The Liberal Party is a socially liberal party whose base is mostly upper middle class areas, and it is popular among voters who are NIMBYs and/or don't want higher taxes. The Green Mountain Party is a lot like the Progressive Party ideologically, but is a Vermont regionalist party dedicated to advocating for Vermonter interests. The map above represents a relatively neutral political atmosphere. No party has a majority of seats, but the Commonwealthers have a 41% plurality (152/368). I didn't make this map specifically as a US-style or Westminster-style system, but in the former this would mean the Commonwealthers would try to elect a speaker with a plurality of seats, and in the latter they would need to caucus with the Solidarity Party to get a majority.
Click to expand...

Cross-posting this from the map thread. 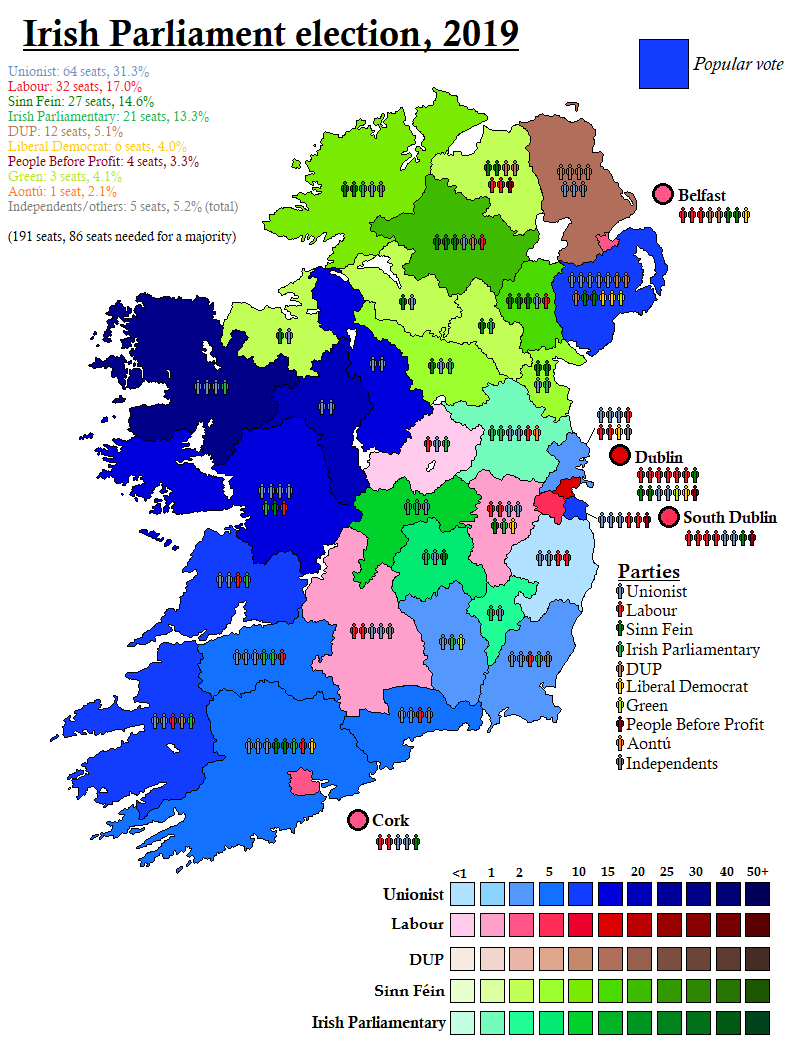 The 2019 Irish Parliament election saw a thoroughly striking result given Irish history, and it has been joked that were someone from the day the Home Rule Act 1885 was passed to see the map, they would wonder what kind of prank was being pulled on them. But no, the colours and seat totals are correct, as absurd as it may seem. So what happened?

The first question, of course, is not just how the Unionists won the most votes and seats, but how they did so while winning just one of the famous ‘six counties’ of Ulster that were once their strongest bastions and without getting a single seat in County Londonderry or Belfast. The answer is that in the intervening 135 years, the Unionists have evolved from a conservative Protestant party to a liberal-conservative big tent populist movement, appealing to conservative Catholics disillusioned with the turn of young Irish people away from the Church and its traditional ideals on issues like abortion and gay rights and inclined to support neoliberal economics instead of socialist experiments.

Next, one might ask how Labour have managed to retain widespread support. Since the 1930s, Labour has been the main opposing force in Irish politics mostly due to its mainland cousin pumping money into its cause and due to a generation of left-wing Irish abandoning the Unionist-Nationalist duopoly in its favour; under Thomas Johnson, it laid the foundations of the welfare state which Attlee’s government would take inspiration from a decade later, and more recently under Dick Spring it used the boom in the Irish economy of the 1990s to invest in public services, make its general populous richer, and held up surprisingly well compared to the rest of the UK when the Great Recession hit as a result. While the party under Catherine Murphy has proven significantly less popular, it has retained a solid vote across Ireland due to its successful capitalization on the upswing in support for democratic socialism among leftist voters in recent years.

Something else perhaps curious to an outside observer is the strength of Sinn Fein. Effectively, in the past decade the party has managed to capture the hearts and minds of left-leaning Irish nationalists, with an even more ardent commitment to democratic socialism than Labour, a republican undercurrent that resonates significantly with northern Irish who resent the influence of Protestantism on their lives, and the personal popularity of new leader Mary Lou Macdonald all allowing it to perform very strongly in 2019.

Then one might note, looking at the Irish Parliamentary Party and their tiny 21-seat grouping, how the mighty have fallen, given that once upon a time they could come close to winning an overall majority of Ireland’s seats and even votes all by themselves. Effectively, since their modern high point of the mid- to late-2000s under First Minister Bertie Ahern ended, they have been eaten away at by every party under the sun- the Unionists snatched their broad populist appeal, their Irish nationalist credentials have been superseded by Sinn Fein, most Labour voters blame them for the recession and ‘ruining Dick’s prosperity’, and most of the minor party voters consider them too spineless to be worth bothering with, especially after they aligned with the Unionists to keep Micheal Martin in power after the 2011 and 2015 elections despite their votes and seats being sapped away. The Martin government enacting policies like the establishment of gay marriage in Ireland and the liberalization of abortion after national referenda didn’t do much to revitalize the party among liberal-leaning voters, who considered them long overdue as mainland Britain had already established them, and even alienated some older rank-and-file IPP ones. Critics have simply summarized their problem as ‘not having any policies besides being the natural party of government, and they aren’t that anymore’.

Moving on to the minor parties, the ideologies become more diverse. You have the Democratic Unionist Party, the smallest to win a county’s popular vote, a haven for conservative Protestants of the sort that used to be Unionist to the bone before it diversified (or as they would probably argue, pandered). The Liberal Democrats are effectively a centrist protest party- derisively nicknamed ‘Yellow IPP’ or ‘Yellow Tories’ depending on who you ask- but, to their credit, have generally avoided kowtowing to those two parties on certain issues, mostly suffering because of the mainland party’s decline. The far-left People Before Profit and Green Party are fairly self-explanatory with a decent base among working-class Irish and ecologically conscious voters, and Aontú is effectively a socially-conservative split from Sinn Fein.

Effectively, following the election there were two obvious options for a coalition- a left-wing one between Labour and Sinn Fein with the IPP’s support, or the Unionists taking control of a renewed coalition with the IPP. Either not anticipating or not caring about the distaste his decision would create, Martin quickly arranged to be deputy First Minister in a government led by Unionist Leo Varadkar, a compromise candidate as not only a southerner but also the first non-white or openly gay First Minister, backed up by a handful of independents and Lib Dems.

Not surprisingly, this decision was met with outrage from many left-wing Irish voters, and in the year since the election the IPP’s vote is hovering at around half what it was in 2019. While Vadradkar has been fairly well-liked by the Irish public, compared positively to Ruth Davidson as an example of a conservative from a minority capable of appealing to a large cross-section of their country, Labour and Sinn Fein have been aggressively pressuring him to adopt more interventionist policy, especially in the wake of the Coronavirus scandal (which has further impacted the government negatively for another dip in Ireland’s economy), while smaller parties like PBP have mocked him for being ‘the embodiment of rainbow capitalism’ and the DUP’s membership have addressed him at rallies in terms that are best not repeated.

At this point, though, it’s hard to say whether in 2023 Ireland will go for rainbow capitalism or ‘fully automated luxury gay republican communism’, as some Sinn Feiners and PBP supporters have jokingly described the potential policy programme of a future Labour or Sinn Fein government.
Last edited: Tuesday at 4:32 PM 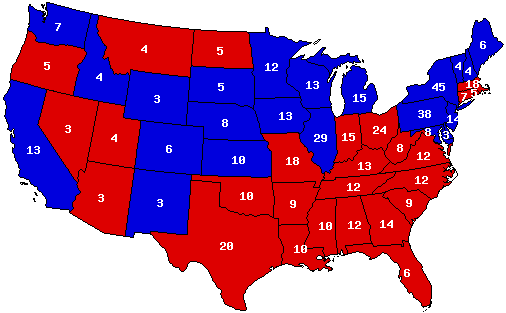 DPKdebator said:
Cross-posting this from the map thread.
Click to expand...

This is really cool. Makes me wanna learn more about New England politics. I never would've guessed the distribution of Solidarity's support, for instance.
Threadmarks
You must log in or register to reply here.
Top
Top