How Sharper Than A Unicorn's Horn? 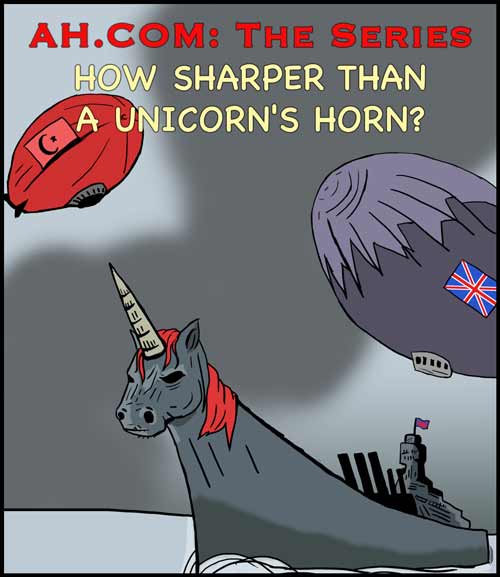 The episode opens with Grey Wolf putting the finishing touches on a massive royal family tree. The AH.commers take a shuttle to visit a new Earth. They are attacked in orbit by POTUS P. Diffin (Stalin Malone), commanding a space shuttle with missile launchers. However, every shot he fires misses by a mile. The shuttle goes deeper into the atmosphere and is attacked more successfully by a laser-armed German airship. It breaks apart, and the AH.commers are about to fall into the Bay of Biscay. However, Grey Wolf uses his 'Flotti' unicorn, turning it into a flotial of destroyers that the AH.commers stand on and splash down into the sea. This produces a tidal wave that flattens a passing Frenchman, Fhaessig.

Fhaessig demands the right to surrender, and then Steffen shows up in a Panzer and puts his towel on a deckchair. Thande realises that this world has been affected by a virus that makes everyone act like their national stereotypes. This is, in fact, Stereotypica. Before anyone can act, though, the AH.commers themselves begin devolving into their national stereotypes, and are fought over by fleets of airships from all nations.

However, back on the AH.com Ship, Torqumada develops a cure. He releases it into the air, but this also cures all the indigenous people of the planet, including Leej and Jason. Doctor What bemoans the fact that they've just destroyed a unique world, but everyone else thinks it's rather cool.

The Stereotypica Virus featured in this episode later reappeared in HAIR TODAY GOTTERDAMMERUNG TOMORROW, in which we learn who created it and why.

The title is a play on the Shakespeare quote and the title of an episode of Star Trek : The Animated Series, “How Sharper Than A Serpent's Tooth ?”, which borrows from said quote.