Welcome to the lobby for American Administration: 2nd Term!

AA is a game about making decisions and determining which course of actions are the right ones to take. This can range for the minutiae of the fine points of a bill to the decision to declare war or deploy nuclear weapons.

Being a Modeled US government, AA replicates many of the offices of government. For gameplay reasons, powers may be slightly adjusted to make roles more enjoyable and meaningful.

Events in AA, and the responses to events, are determined by the Game God assigning the likely outcomes, and then using a random number generator to determine what happens. This ensures a level of fairness in the game, while retaining the very likely element of real life that sometimes bad solutions work and good ones fail.

After a nailbiter election requiring a recount of votes in Florida, the US Supreme Court in effect ruled that Mississippi Governor, Michael Collins, was 43rd President of the United States. President Collins marginal victory over Vice President Richard Bark was viewed by many as a sign that he would be a weak and ineffective president. That would not be the case.

In the most effective terrorist attack in US history (The Friday the 13th Attacks), Muslim Fundamentalists hijacked four 757 Jumbo Jets, brought down New York's World Trade Center, damaged the Pentagon, and crashed a plane into rural Pennsylvania. Over 5000 people were killed in the attack; the public demanded a strong response and within weeks, US forces were deployed to Afghanistan, to fight the Taliban Movement and its Fundamentalist allies.

The Attack revived Collins' Presidency, who promptly cut taxes to stimulate growth (or so was claimed) and sought to target another regime long hostile to the United States: Iraq. Using the pretext that Iraq had weapons of mass destruction, the US government increasingly demanded first UN inspections, then support for war. Collins would gain British and Various Eastern European nations on board with the conflict, which quickly overthrew the Fascist Iraqi government.

These victories gave Collins more momentum at home. Despite growing unpopularity of the Iraq war and a lackluster economy, Collins did deliver on a couple of successful wars. In the 2004 election, Collins won uncontroversially against his Freedom Challenger, Tennessee Senator Sean Howard Brooks.

The second term of Michael Collins promptly went down in an increasing spiral of problems. Hurricane Karl destroyed New Orleans, leading ghastly sights of starving people at the city's stadium left without enough food or water forced to raid local stores. Billion Dollar Bankrupties, most prominently that of NRG, Inc, scandalized business leadership and forced congress to draft tighter regulations of corporate accounting. Finally, in 2008, the legs gave out on the weak US economy: Lionshare Financial, a major banking and investment firm, was the first victim of a series of financial problems caused by too much reliance on highly risky “subprime mortgage” debt. The Stock Market lost half of its value, and a financial cascade that wiped out the entire US Financial System seemed possible.

This was averted when the deeply conservative Collins made the decision to grant emergency funds to businesses in order to avert a massive series of bankruptcies. The Bailout(FISH Act) was successful in stopping the economic slide from worsening, but this necessary act had alienated conservatives, and left the Eagle Party in complete disarray.

There would be a showdown at the ballot box to follow. Andrew Bard, Arizona Senator and a rival of Michael Collins for the 2000 nomination, would ultimately lead moderates in the Eagle Party in the 2008 Election—where he faced Colorado Governor Michael Snow.

While Snow won the election decisively, tragedy soon struck: Snow died of a stroke shortly after taking office. His Vice President, Kevin Yankee, was not a professional politician: A former CIA director and cold war era spook, Yankee had been chosen to provide a strong voice to security concerns. Like Michael Collins, few expected Yankee to achieve much as President of the United States. And like Michael Collins, these people were to be proven wrong.

The first major event of the Yankee Presidency was the Crisis in Korea. For reasons unknown the North Korea armed forced turned on the country's political leadership, leading to a multisided civil war. As military warlords sought to seize power for themselves, chemical weapons started flying. Kevin Yankee made the right call: the USA had to intervene in order to prevent further humanitarian catastrophe and secure North Korea's nuclear weapons.

The North Korea capital, Pyongyang, was partially destroyed by a low yield nuclear weapon. But the weapons meant for Seoul were shot down by the US Air Force. It was an act that completely defined Yankee's presidency. He had saved the lives of hundreds of thousands in one stroke.

Yankee's domestic policies were moderate. While agreeing to a large round of infrastructure spending and the decriminalization of Marijuana, Yankee did little to increase social programs. Small tax hikes were made and massive progress was made in fighting the debt. The Emphasis on infrastructure spending was prudent and invigorated the US economy. Finally, Yankee oversaw the peaceful transition of Puerto Rico into it's own independent nation after a major, abit shocking, referendum in 2010.

Kevin Yankee also foresaw other serious challenges around the world: The election of a Pro-United States government in Russia oversaw a massive improvement of relations between the two powers which eventually resulted in Russia making the unprecedented move of applying for membership of NATO. This caused serious problems between the United States and it's multitude of Eastern European Allies, with Poland in particularly unwilling to accept Russia's entry into the organization. In the end, Poland, along with Romania who had a extreme-right nationalist government since late 2009, both left NATO after Russia was officially accepted.

Israel fell victim to the World's first act of Nuclear Terrorist in 2009 when Haifa, Isreal was attacked by a nuclear weapon, originating from Pakistan. The attack devastating Haifa and resulted in nearly 200,000 deaths. Radicalizing the Israeli public the center/center-right government of Israel would fall to practical anarchy in late 2010 after a series of suicide bombings, resulting in mob violense and borderline ethnic cleansing which would eventually trigger a round of war between Israel and it's neighbors. The war would ultimately go very badly for Israel, who was forced at one point to begin using low-yield nuclear weapons against advancing Arab forces. After the use of Nuclear Weapons the United States diplomatically intervened in the war and threatened further action unless the war stopped. The subsequent Treaty of Yokohama resulted in Israel both losing territory, disarming (to some degree) and paying massive reparations. After radical-leftist/socialist came into power post-war, the Israeli government has refused to pay reparations which remains a major issue of confrontation to this day.

There are a multitude of other issues in the Middle East as well. Iraq has been seceded by a state commonly dubbed as Northern Iraq, which consist of the Baghdad Metropolitan region as well as Northern Iraq and Iraqi Kurdistan. Predominantly Shia southern Iraq along with most of Western Iraq have been annexed by Iran and Syria respectively. Iran itself is the victim of its own belligerence, losing territory to both Azerbaijan and Pakistan. The challenges of dealing with the redrawn Middle East and it's future challenges, including a defunct OPEC, a independent and internationally recognized Palestine, and the potential end to the Israeli-American special relationship, are left for the next President to bear.

The Yankee Administration has also increasingly turned to Africa as a source for both resources and new potiential allies. Heavily investing in the Democratic Republic of Congo's oil resources as well overseeing both a increase and modernization of Aid to Africa, it can be said the Yankee Administration has done more for the continent than any American President in modern history.

There are also new challenges and opportunities on the domestic front. The Yankee Administration has overseen a massive wave of technological and scientific advancement, including but not limited to Algae Solar Power, Orbital Spaceflight, Carbon Nanotubes, and a multitude of medical achievements.

Initially the race would be rather clean and positive between the candidates, with Alexis Papadopoulos commanding a clear lead in most early polls. Then, beginning in October a grudge match began between the Papadopoulos, Bluth, and Padilla campaigns. Padilla scored a major hit when a minor position change blew up in Papadopoulos' face and resulted in the questioning of her competency as Treasury Secretary. Bluth would go after nearly everyone with some level of negativity, though displayed adept abilities at being able to negate any criticism for it, Padilla however was not so lucky. Padilla came under major criticism from nearly every sector of the party, especially the establishment, for both her apparent smear campaign and what was viewed as her being out of touch with most Americans.

Things would finally come to a head when Papadopoulos did serious damage to Bluth's campaign by calling out his negatively, while Padilla in a subsequent move brought down the Papadopoulos campaign after staring the narrative that she wasn't “strong enough to handle being President.”

Throughout it all John Patrick talked a positive message and tried to act as statesmen like as possible, which saw him slowly but surely rising in prominence as time passed. John Patrick also heavily benefited from former Papadopoulos supporters after she endorsed him following her exiting the race. Thus, by the time the first caucuses and primaries started to begin John Patrick was showing minor, if not large leads, over his opponents.

The 2012 South Carolina Debate resulted in a major shift in the election. The highly publicized debate would see tens of millions of Americans watch Bluth, Padilla, and Patrick battle it out for dominance. Bluth and Patrick both debated competently with Patrick being polled as the, abit narrow, winner. The clear loser however was Padilla, whose bad debate performance was considered the final nail in her campaign's coffin. After the debate, President Yankee officially endorsed Michael Bluth as his choice for next President, but by that time with both plurality of former Padilla supporters and a strong debate performance behind him, Patrick was practically the presumptive nominee. Thus, it was in March that both John Patrick and Michael Bluth agreed to, in the name of party unity, form a unity ticket with Patrick as the Presidential nominee.

Tragically, Bluth would be murdered while campaigning in his home state of Arizona in a shooting spree (Tuscon Massacre). Adhering to both Bluth's wishes as well as a concession to President Yankee, Patrick choose Alexis Papadopoulos as his new VP nominee. Together they would go on to win a sizable electoral victory against Eagle Party Nominee Theodore Crow (E-IA).

note: Cabinet Design can shift based on how the players would like to split responsibilities. 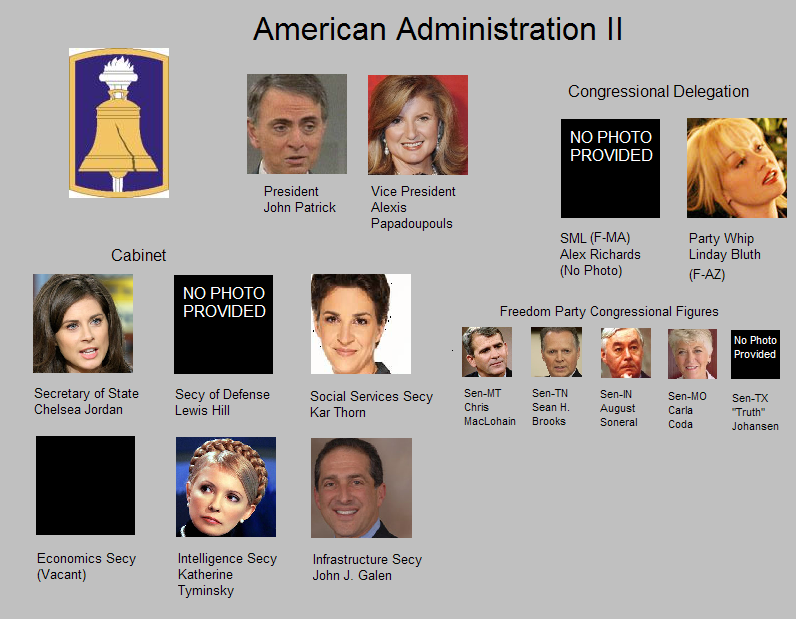