Make a map showing a revolt, revolution, or civil war that is in some way reversed from a analogous event that occurred in OTL. (Such as Northern states seceding from the U.S., or monarchists rebelling against the Soviet Union.)

If you're not sure whether your idea meets the criteria of this challenge, please feel free to PM me or comment in the main thread.

Entries will end for this round when the voting thread is posted on Monday, January 27th, 2020.

PLEASE KEEP ALL DISCUSSION ON THE CONTEST OR ITS ENTRIES TO THE MAIN THREAD.
Any discussion must take place in the main thread. If you post anything other than a map entry (or a description accompanying a map entry) in this thread then you will be asked to delete the post.

Don't forget to vote on Map of the Month 7!​

POD is Ottoman Empire being overthrown in the 1908 Young Turk Revolution. Turkey, Iraq, Syria and Macedonia remain under the rule of the new Young Turk led Republic of Turkey while Hashemites take Hejaz and Palestine, Balkan states "liberate" more places as Bulgaria and Albania declare full independence. Italy takes Libya while nominal Ottoman rule ends in British held Egypt and Cyprus. The capital of this Republic is still Istanbul/Constantinople. Turkish Republic does join the Central Powers in the First World War and loses. A treaty similar to OTL Sevres is signed Partitioning Turkey. The event that is reversed from OTL is Turkish War of Independence. Rebel government is established in Ankara as OTL (Grand National Assembly estaabished in 1920 as OTL) and The War continues mostly as OTL. When Sultanate is abolished in OTL (1922), ITTL the Nationalist/Revolutionary Government officially/nominally reestablishes the Ottoman Monarchy. After peace is agreed upon the Ottoman Family returns to Turkey. Dodecanese is reclaimed as is Hatay, Batumi and West Thrace. Another part of the peace is British and French gains in Arabic regions being transferred to Hashemite Arabia. Iraq is still occupied by Britain in order to exploit the Oil in Iraq while Hashemites have nominal rule over it and begin the process of establishing civilian administration over Iraq, Hashemite capital is also moved to Jerusalem. Ankara becomes the capital of the Sublime State of Turkey (Devlet-i Aliye-i Türkiye) and grows as a quasi planned city. While Ankara is the capital Istanbul remains the royal capital, thought the monarch does visit Ankara often. The nation is a constitutional monarchy/caliphate where the sultan has little power. Turkey does have a language reform and adopts the Latin script. However the reform is more limited/less through ITTL.

Particularist Risings in the Cisalpine Republic (1847-8) 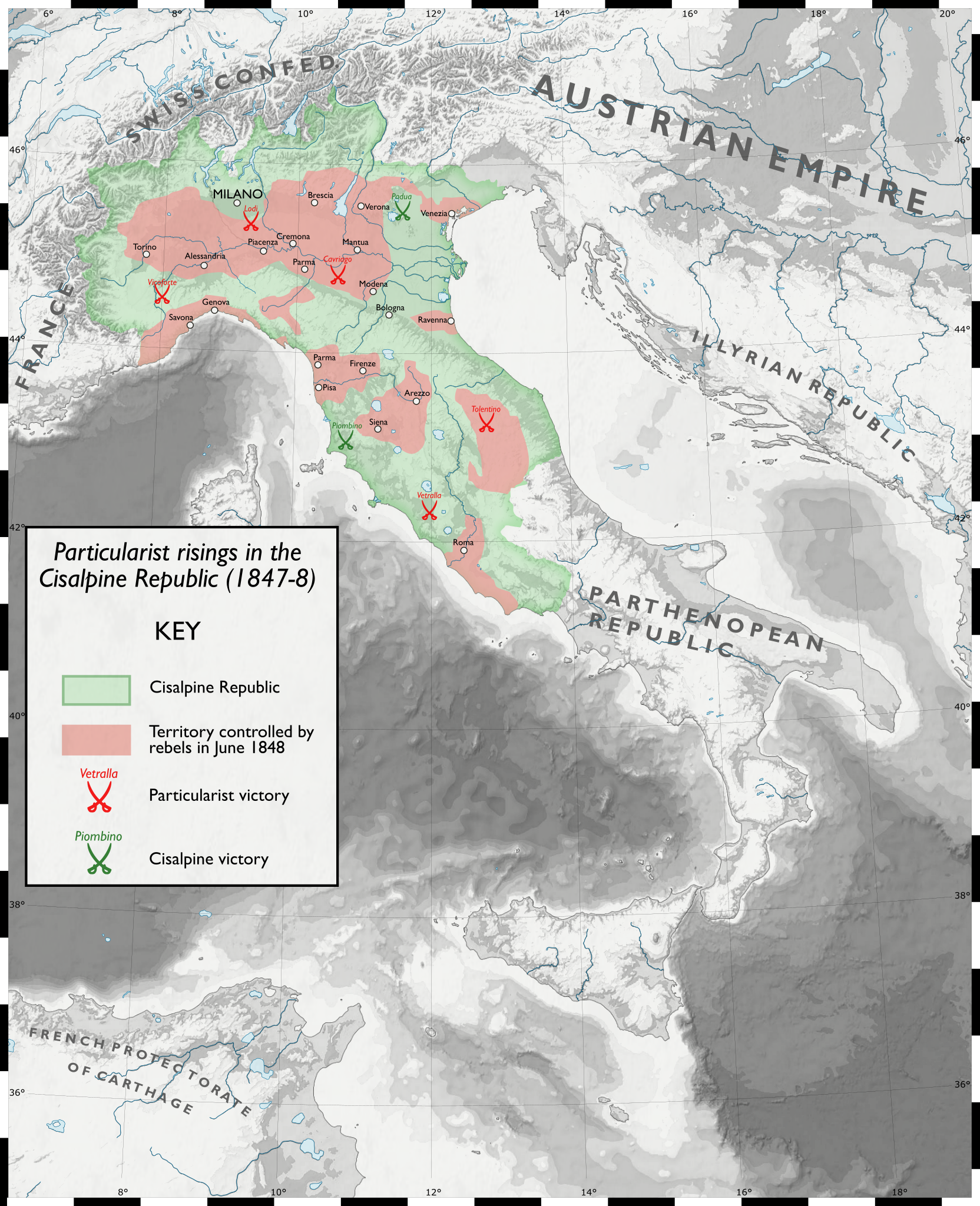 “The 50th anniversary of the foundation of the Cisalpine Republic was celebrated in 1847 with months of universal (if government-mandated) internal celebrations, culminating on 29 June in a public display in Milan unrivalled in Italy for ostentation since at least the coronation of Cola di Rienzo, if not that of Charlemagne himself: in front of a vast crowd of Milanese locals and foreign dignitaries, Director Garibaldi was ceremonially crowned with the golden laurel wreath of office as a massed choir of sanculotti from across the Republic broke forth in an Italian translation of Schiller’s An die Freude. It would have seemed to any reasonable observer that, in the form of the Republic, Schiller’s dream of a world where “magic [bound] again/what Custom had long divided” and where “all men became brothers” had been achieved.

Even as these celebrations were ongoing, cracks were beginning to appear in the apparently pristine edifice of the Republic: longstanding grievances within the previously independent city-states and minor duchies which had been subsumed into the Cisalpine Republic at their losses of civic and customary rights, the unpopularity of the Republic’s attempts to mandate the use of Milanese as the single permitted dialect of Italian for official purposes, and anger at the increasing efficiency of the Republic’s tax collecting regime fuelled the growth of Particularist sentiment and the early stirrings of revolution in the Republic’s hinterlands.

These discontents boiled over into outright revolution in Padua on 6 November 1847, which proclaimed the creation of the Paduan Particularist Republic. While the poorly armed rebels were put down with relative ease by forces loyal to the Cisalpine Republic, the bloody aftermath of the uprising prompted further Particularist rebellions across the Republic: the Paduan Particularist constitution, with the importance that it placed on the restoration of ancient civic and customary rights and hostility to any pan-national sentiment became a model for the various forces still in rebellion.

Unequipped to deal with a widespread uprising without military assistance from the Second French Republic (which was too preoccupied with Particularist risings of its own in Catalonia, Brittany and on the Rhine to provide more than token help to its Italian satellite), the Cisalpine Republic was forced to dissolve itself into eleven Particularist states on 23 October 1848.” 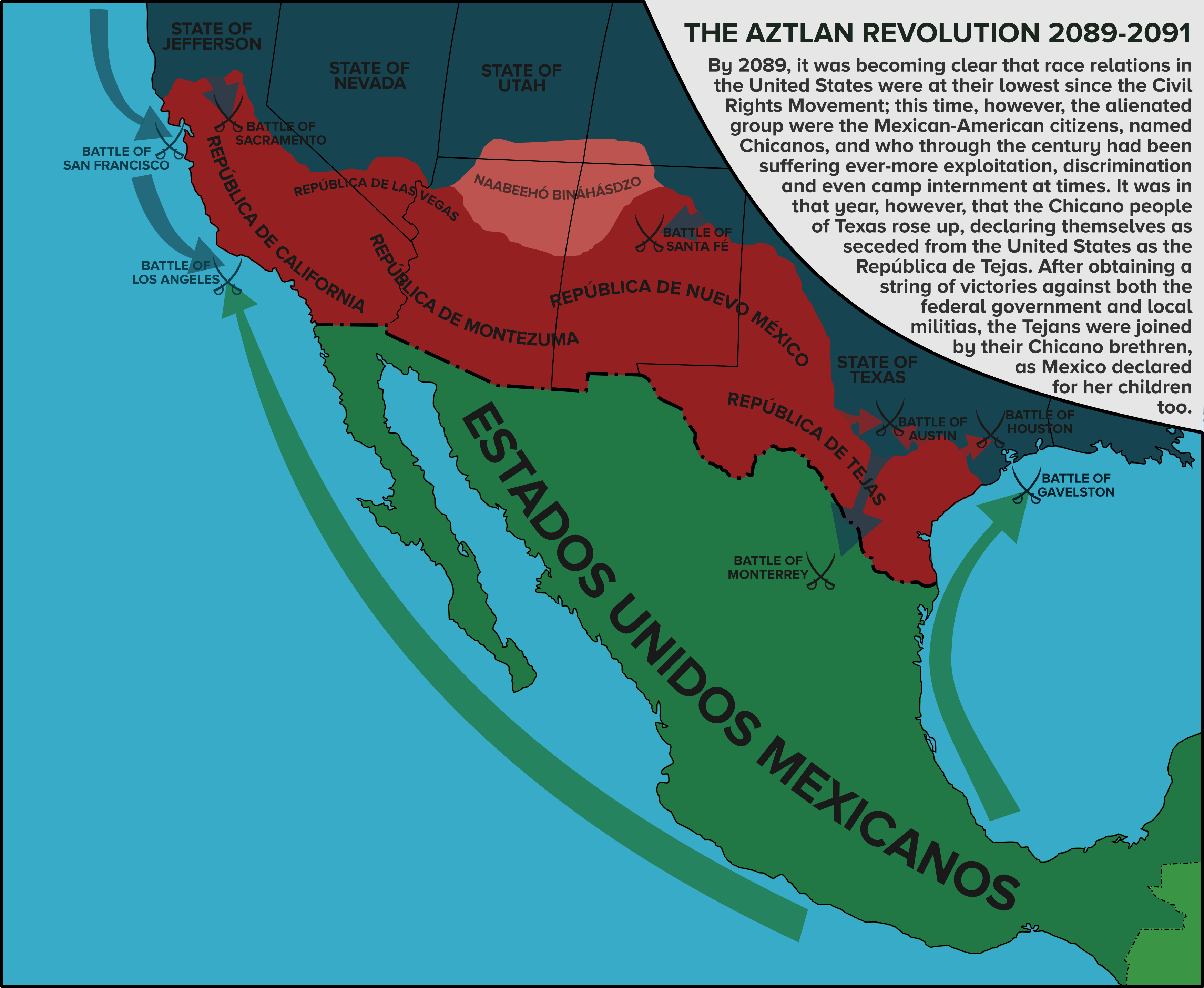 Ok, so if it wasn't clear, this is supposed to be a reverse from the Texas Revolution of 1835-36. I placed it deep into the future mostly to avoid any sort of controversy. I want to avoid all racist undertones that there may be in this kind of settings, since I just thought this would be an interesting idea.

So, it's clear by the way things turn out that the balance of power in this world is quite different from our own. I imagine the internal problems of the US must go much beyond this particular crisis; in fact, in an extended universe I imagined, this Aztlan Revolution is pointed out as the first large loss of territory of the United States of America into their complete breakdown, but that more mature historians stress was not by far the starting event of the 'Fall of the American Empire'. I envision alt-historians from this time to have the dogma that, after Katrina, the United States are unsalvagable, similar to our own dismissal of Roman ability to survive since centuries before their actual fall.

In this time, although the United States remains intact, for now, their internal problems make them much weaker than apparent from the map, while Mexico is evidently sturdier, making them able to sponsor and intervene in the Tejan and Aztlan Revolutions, which is what gives the rebels their edge over the federal government. Even so, the political developments of the country would also be interesting; I imagined that, soon after the war, and after having 'been invited to annex' the newly-freed Chicano republics, the Mexican State would reorganise into a sort-of Empire of Our Lady of Guadalupe, a social-democratic and very Catholic State, with Our Lady of Guadalupe as the honorary Head of State, and even expand southwards up to becoming the new regional hegemon, as the United States collapse under their own weight.

There's also the Navajo Question - a group that decided to join in the Revolution... for some reason. One imagines their treatment under a decaying federal authority wouldn't be the best, and that their desire to see themselves freed from their rule could amount to actually rising up alongside their Chicano neighbours. Their fate? Possibly became independent as well and later became associated with the Empire of Our Lady of Guadalupe, possibly be re-annexed, if only nominally, into a dysfunctional United States, certainly with much greater autonomy and ready to declare independence the next time a conflict emerges within the country.


Well, it's not much, but I think it's an interesting idea. Time was scant for this one, so it's not completely where I wanted it to go. Oh well, I hope people like it anyway.
You must log in or register to reply here.
Top
Top