La Triplice - Or Italy in the Central Powers

This thread is here tnanks to @Enigmajones, who suggest me to post here.
My intention is to post a serie of Maps and Flags about state and nations from a TL when the Cebtral Powers won the war(thanks to Italy joining the Central Powers according to a Germany secret plan to split Double Monarchy after the war, and enormous gaining in France colonies in Africa)

The war is still brutal and bloody and still (due to butterflies or to a more deep commonwealth involvement) last until 1918, when finally France surrender.

(Disclaimer) i'm not so good to write TLs because i prefer to obey to the rule of cool than absolute hystorical likelihood.
So, i'll post here, as i do for nemesis, short posts with a pic, a flag or a map, with a brief description of the event/image/nation.
It's probable that you'll see some pics(expecially flags) that i have just posted.
Thanks to the comprhension.

(Disclaimer II): Feel free to suggest, ad advice and criticize me.
If i think that is the matter, i'll respond to you. 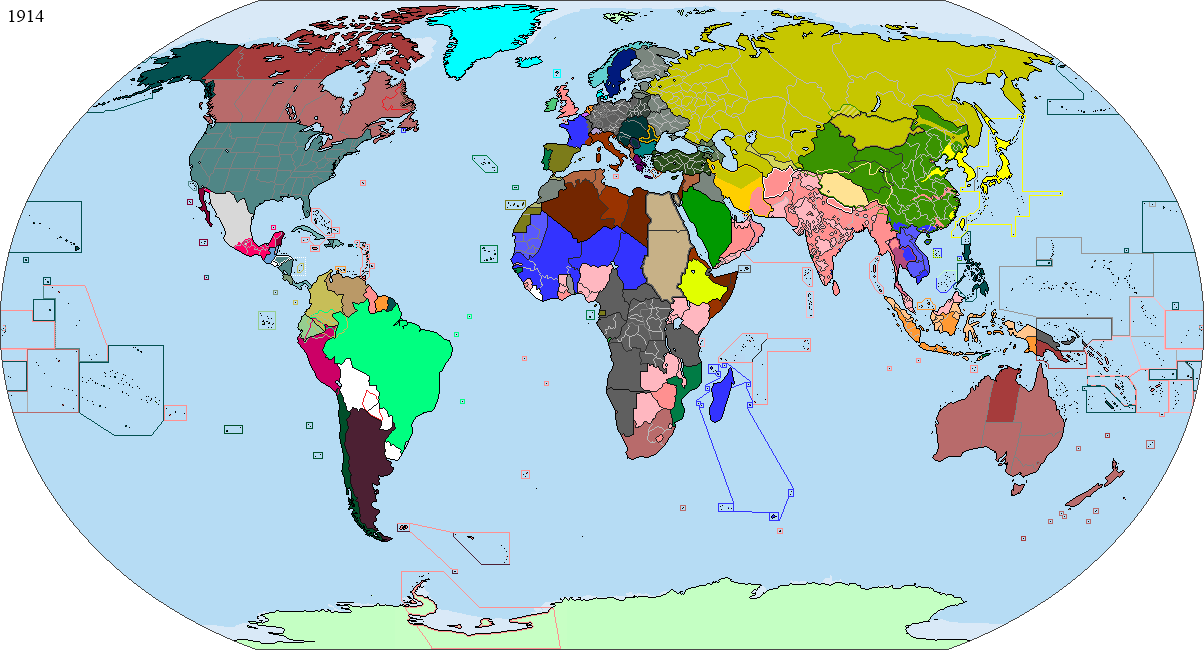 (Ignore the 1914 in the angle, i forgot to cancel it)
The map shows the world at the end of year 1922, one year after the Conference of San Remo(the most important peace conferences of all) six months after the conference of Munich which sealed the fate of the Double Monarchy
- Other conferences, and peace treatyes where in Bonn(Peace with UK and commonwealth), Zagreb(Peace with Serbia and Rumania), Izmir(Peace with Greece) and Sevastopol(Peace with Russian Empire in exchange to the help in defeating reds)

Germany emerged as absolutly the winner, but needed to compromise with UK and Japan
- Treaty with Japan was signed only in 1924, also if the state of war was pratically revoked by both nations
Germany took half Belgium and advanced in East Europe annexing directly parts of Poland, and installing a military garrison in the rest; while puppetting goverments in Ukraine, Belarus and Finnland.
After the collapse of Austria-Hungary(with the explicit italian involvement; for example Fiume occupation by Gabriele D'Annunzio) Berlin took controll of Austria and Bohemia leaving Italy to fight a brief war with Hungary
Egypt went under german protectorate and some african colonies were annexed, but the great bulk of british dominion remained intact.

Next come italy.
Italy suffered a lot in western Alps during the war, but in the end the superior firepower of Germany helped Rome to save the day.
Thanks to Italy, however, Germany was able to dispatch more soldiers in Russia and in Turkey.
So, when peace come, Italy was generously rewarded.
Not Only Tunis and Algeris were trasfered to Rome, but also Nizza, Savoy and Corsica.
Montenegro become a puppet and Fiume was occupied by Italian patriots under D'annunzio volunteers.

Hungary won the war, also if winning meant to betray Austria(wich Budapest did without exitation).
They recived Serbia and occupied Rumania (altrought Rumania oil fields stayed under German occupation).
The war for Dalmatia against italy was short, but proved harmfull for relations between those two powers.

Turkey is another matter.
Undubitably they won the war, but the burden of the conflict proved to be too heavy for Constantinople.
Kemal Pasha, the man responsable for a lot of victorius battles, took power in 1918 after the end of the Conference of Izmir and send his collogue, Enver, to a long, and in the end deadly, mission in Russian Asia.
Constantinople took all armenian and azeri lands from Russia, going to occupy Georgia, but in the name of the new Turkish and laical ideology (Kemal saw that was miracle to end this war victorious, a miracle of german weapons and training, so he decided that modernization could be only radical or not be at all) Arabian lands were released because were a dead lift for the Empire, and quickly were divided by other Central Powers(To be onest only by Italy and Germany who leave to Rome the honor to defend and occupy Jerusalem, while they took the Iraqi oil field)

Bulgaria was the last of the Central Powers, both in terms of land gaining and prestige, but a victor nothingless.
Sofia was rewarded with serbian Macedonia and greek Thracia, avoiding a war with Turkey for Rumelia only beause Berlin belive that two allies in war eachother were just too many.
Last edited: Nov 27, 2018 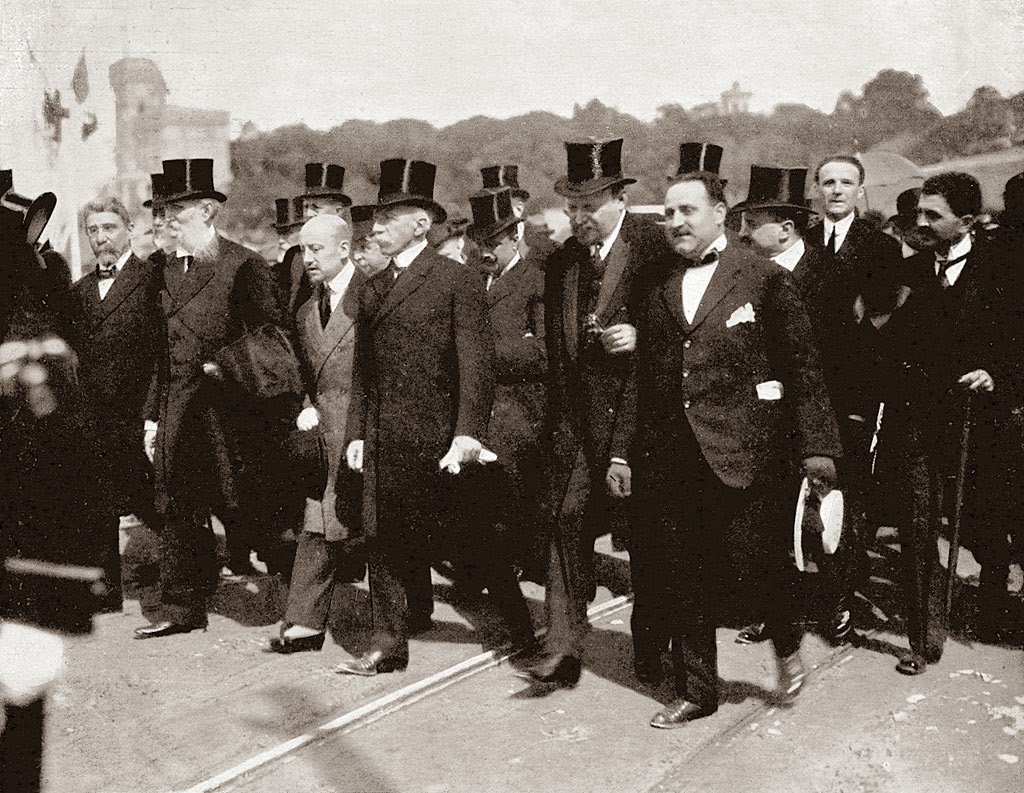 Gabriele D'Annunzio is sworn as Italian PM (Presidente del Consiglio dei Ministri) after the end of War against Hungary in 1919.
He succeded Orlando who failed to act when the new hungarian government try to occupy Fiume and dislodge italian voluntees.

This is just not possible. If you want a Versailles equivalent in Bavaria (which is a good idea!), use Hohenschwangau or Herrenchiemsee. "FC Bayern München" is the name of the football club, but that is the only thing called "Bayern München".

You can also use Munich (München) itself of course. But not Bayern München... or did the conference take place in AllianzArena?

Oh thanks, you are, obviously, right.
I confused with Monaco di Baviera, as we say in Italy to avoid confusion with Monaco principality

I'll change in Munich. Thanks again ... I have not see the error

Now a question. With Italy in the CP, do you think Gallipoli occured?
Or British forces tryed to knock out Italy?
I belive that Sardinia could be occupied, but could Britain landed in Sicily and/or mainland Italy?

The map show the regions(Regioni) in which Italy should be divided after the war; however for many reasons(not last fear of anti-italian and secessionist sentiments) they were not instuited, but remained only a geographical partition of Italy.
The real powers remainin in the prefectures(Prefetture).

In its 50th (1990) Iusse, the famous military magazine "La Triplice", published a deep and long reportage on the conference of San Remo and the war against Hungary
"La Triplic2 is been pubblishied since 1920, and it is the most longeve and read military and foreign politics magazine in Italy.
Many important politicians, journalists and opinionist write in there. 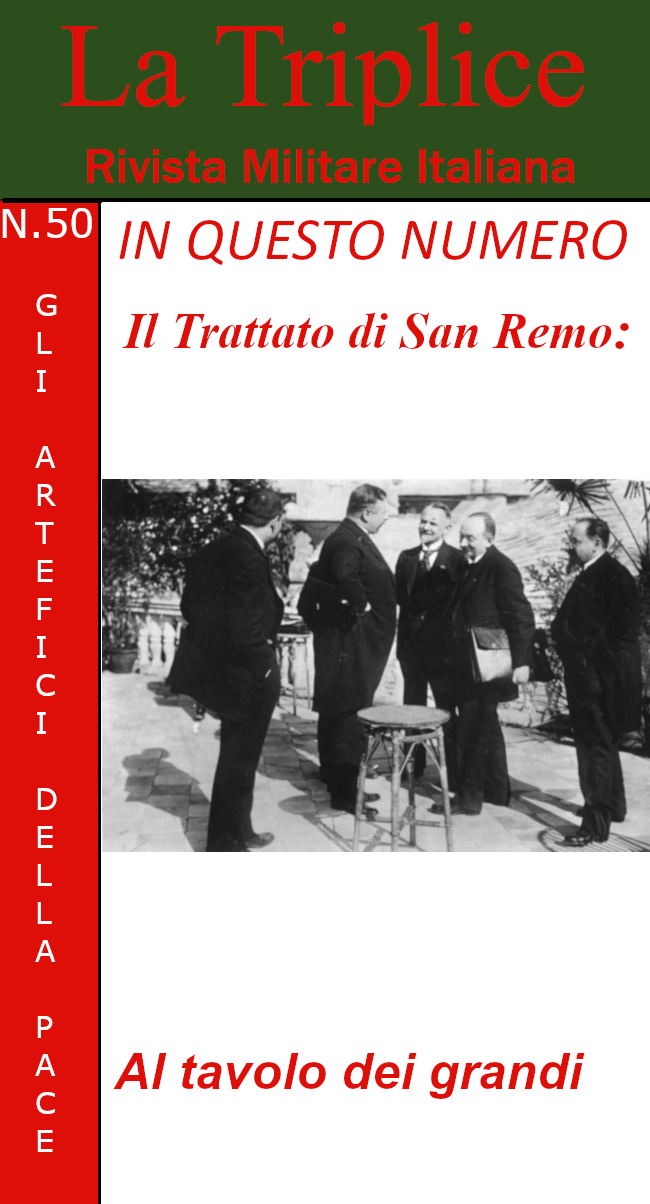 I doubt Italy would've done that good if allied to the Central Powers - we were lucky to go against a Habsburg realm that was far from being what it once was and, even then, we didn't really shine. Against France and Great Britain, well, it's going to be a wild ride, and not the good kind of wild ride. The Regio Esercito was plagued by quite a few issues...

Well here I'll go with more Rule of cool than historical plausibility.
However Germany was disponibile to give us a lot of thing just to stay neutrals
If we fight, with General Pollio as commander in chief(Instead of Cadorna), i can immagine a some more prizes. 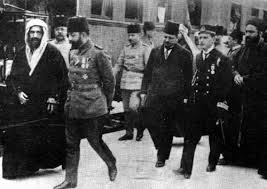 Altrough, after the war, the young turks officers took power and deposed the Sultan leaving to Germany and Italy the task to administer and control Arab lands, still they enforced a their Protect Ali Haydar as Sharif of Mekka, again both Hascemites and Inb Saud.
Here, we see the new Sharif, escorted in Mekka by officers of the new turkish republic

People in front of the austrian Parliament, republic proclamation day (12/04/1919) 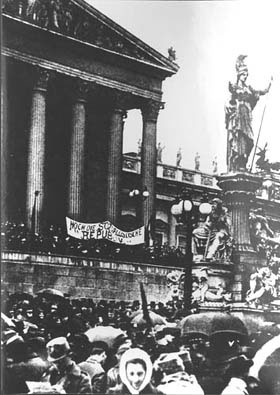 LA TRIPLICE: N.3 (11/1953)
The Austro-Hungarian Empire was between the war victors.
The Austrian people, however felt not.
Hungary occupied Romania and Serbia, but Austria took nothing and, moreover, Italy (following the secret compact with Germany) started to claim Italian lands in Austria
While Hungary was ready(and at the end they fight) to fight, Austria workers and soldiers protested and start claiming to compromise.
Following six months of turmoil, while Hungary started sending soldiers to Italian borders, theAustrian Comunist Party took momentum and proclaim the republic.

giving Algeria to Italy practically ensures hostility between the two nations for decades to come.

Yes.
This has not only the Task to fulfill Italian colonial ambitions, but, from German point of view, to gain France a new enemy to keep them at bay.

Filo said:
Yes.
This has not only the Task to fulfill Italian colonial ambitions, but, from German point of view, to gain France a new enemy to keep them at bay.
Click to expand...

And this could well lead to France going either radically communist or radically fascist.

Not sure, for now, but I belive communist.
What you think about? 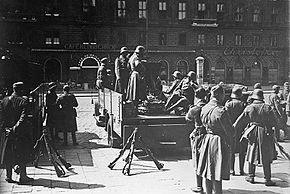 LA TRIPLICE: N.3 (Anno X - 11/1953)
We don't know exactly what happened in austrian Parliament those days; part of the archives were destroyed during the Austrian Rat Republic revolution, and we have only the voices of Great German Party and German officials
So, we don't know if German invasion was an answer to Communist coup or vice-versa.
However in November, the parliament of the Austrian Republic voted a resolution to merge Austria with Germany.
The two days later, in Hofburg the communist and social radical parlamentaries, who were refused to enter in parliament building, proclaimed the Austrian Rat Republic (Österreich Rat Republik) 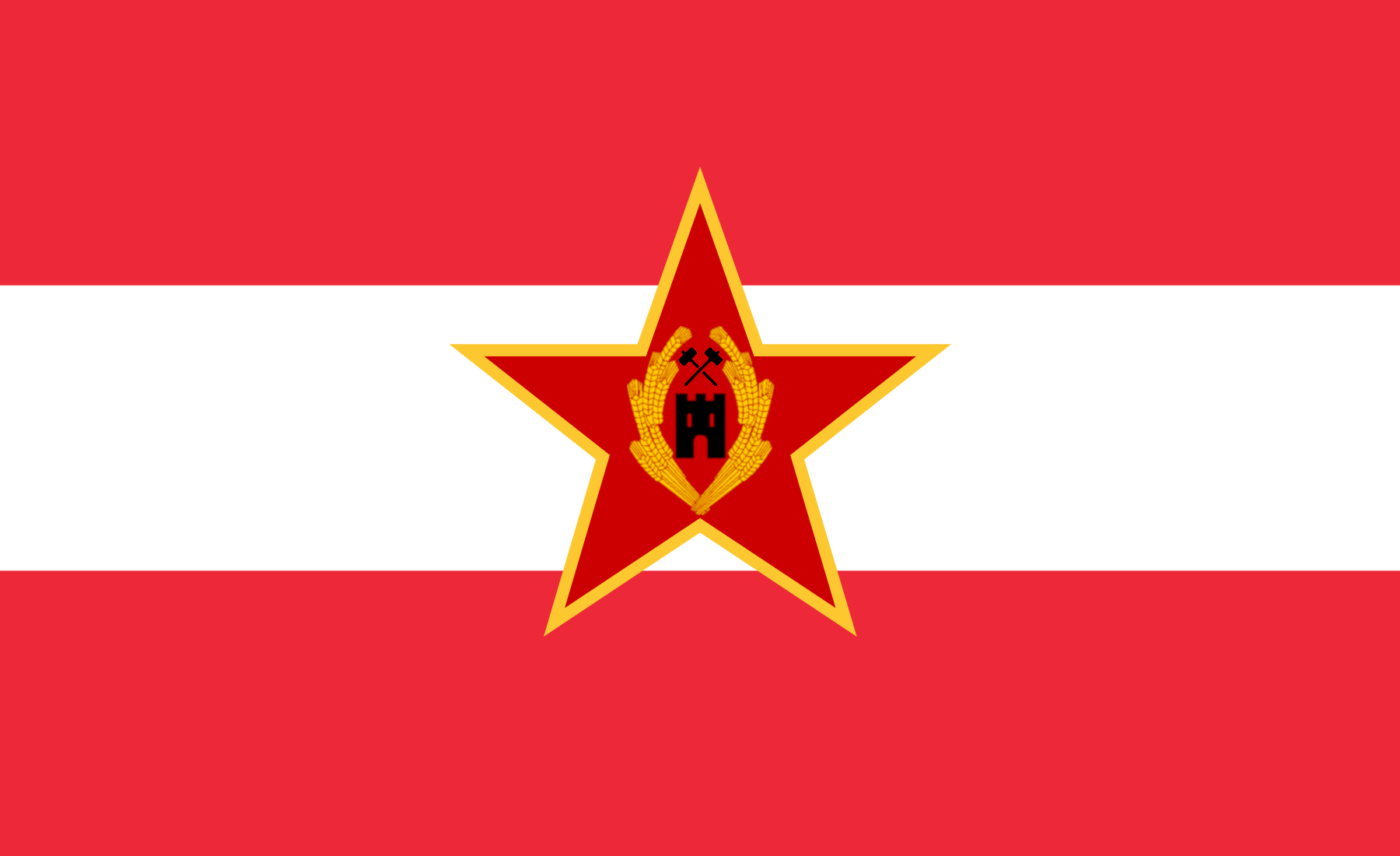 Flag of Austrian Council Republic(Österreichische Räterepublik), November 1919 to April 1921.(From my tl "La Triplice")
The republic was working for Wien(mostly) and Lower Austria(Very less effective).
Its army was crushed by German one at battle of Linz, that three months after retook Wien.
Socialist Austria was never a serious threat to Germany, but was the tombstone for the double monarchy, which was confined only to Hungary.
Last edited: Nov 29, 2018

It would be Österreichische Räterepublik.