If the United States of America, Republic of Quebec, and the Second Republic of Texas, as of 1944 A.D. in the TL-191 universe, were ISOTed to OTL 2022, what would ensue? 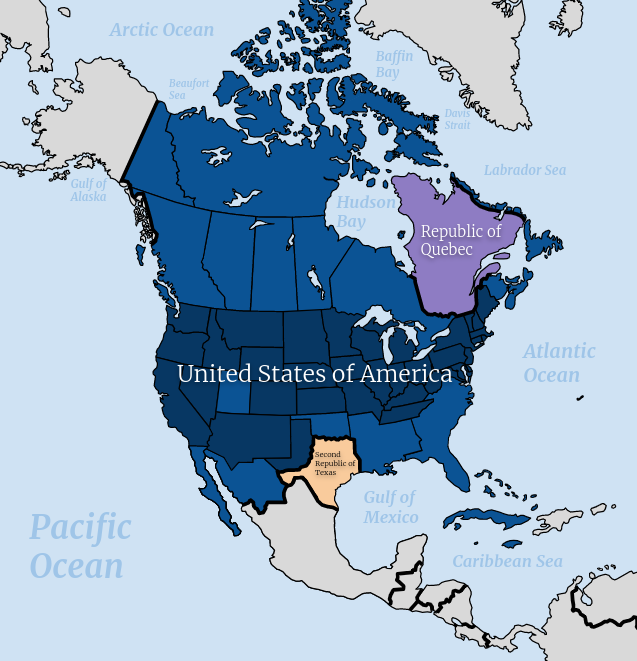 *Made some assumptions in regards to what the postwar situation looks like. I assumed the U.S. would gain the rest of the Anglo-French Caribbean and minor Pacific.

**All Americans, Canadians, and other people outside of the countries affected by the ISOT at the time of the ISOT will remain at their present location.

Mods, if this is in the wrong topic, could you move this to ASB?

Several things that would happen. The largest one being that the New North America would lose all of its trade that had come overseas. While the rest of the world would lose debilitating amounts of financial capital, humanitarian aid and trade with the one of he largest economies of the world.

Mexico has lost quite a bit of its territory and there is now longer a safety valve of encouraging their poor over to America. Plus most of the refugees on the Mexico/American/Texas border aren’t going to want to settle in a country that is structurally damaged and facing several insurgencies and is quite a bit authoritarian. Mexico might actually attract refugees in White Southerners moving their to escape the retaliatory executions carried out by the US army.

considering the ISOTed US is a somewhat a socialist country, they might to try and extend ties to some of the socialist holdouts in our world.

Their might be calls from the world, especially Canadian immigrants in other countries, for the United States to let Canada go. But since the world is probably in a bit of a pickle, it’s not going to be pressed too hard.

The UN would definitely have words to say about the US policy of retaliatory executions and the treatment of the Mormons. But again, the world is in a pickle and the UN has other things to worry about.

like an ascendant Russia, China, Iran’ and their Allie’s being able to more easily push their agendas with America out of the picture. Along with several insurgent groups getting increased recruitment because they would most definitely see this as a sign from Allah. To many young impressionable Muslim men…it would seem very reasonable.

A lot of the nations in the Caribbean and Latin America would be facing serious financial crunches as they would be losing huge amounts of remittances. Which would most likely send those countries into economic recessions, if not outright depressions. Expect to see more Latin Americans moving to Europe/Australia or the more economically successful Latin American countries such as Brazil, Argentina, Mexico and Costa Rica. To name a few

So in a nutshell, the world is going to have it pretty rough

Also are the islands in the pacific under US occupation coming as well? I just want to make
Last edited: Jun 11, 2022

happy neurodivergent papa said:
Also are the islands in the pacific under US occupation coming as well? I just want to make
Click to expand...

Yes, they are included in the ISOT.

World Mapping said:
Yes, they are included in the ISOT.
Click to expand...

America might want to try and draw in the American immigrant communities from overseas. To gain their technical know how and intelligence on the modern day economic systems. Not too many would probably be down to come back though and the US would be weary of allowing Mormons, White Southerners and most people of color.

However I can definitely see the new US being down to receive the African Americans from abroad. Considering the immense amount of national guilt over the reduction. They might even entice them with their own version of reparations. Extracted from the resources and money they collect from the former Confederacy of course.

There is also the question of the US Military forces overseas would react to the situation. Would they place themselves under the command of the new president? Doesn’t seem likely.

Most of the Caribbean in this TL is now under US occupation and several tax havens are gone. Further contributing to the economic shocks felt around the world.

Now that I think about it, it’s not just Americans and overseas that would suddenly be made stateless. The vast majority of the Caribbean nations, except for Haiti and the Dominican Republic I believe. I have been ISOTed away. Which will call into question the citizenship status of these stranded people.

You might see France and England attempting to get their islands back. I see those two countries attempting to get them back via diplomatic pressure and purchasing rather than military force. Seeing as how even though they have a huge tech advantage, this US still has atomic weaponry and a massive military. Plus there won’t be too much of a public opinion to get them back through military force.

The ISOT US might also beneficial perks to any of the people that lived in the former Caribbean countries, probably not Canada though considering the entire Canadian insurgency going on.

I can definitely see left and right leaning media organizations heavily criticizing the new US for various different reasons. The mandatory conscription, repression of minorities, military occupation. A lot of politicians might be calling to boycott American Trade.

The Isot America does have a huge saving grace in that they still have a lot of factories and resources. Heck you might see other developed nations offshoring their factories into this new America.

You might see a militarization of the Alaskan border considering OTL Alaska is still here and probably being pretty concerned what’s happening over the border. Alaska would probably receive a lot of refugees, especially Canadian ones

I know I am commenting a lot on this particular thread lol, TL-191 was my first foray into Alternate history and I found it fascinating.

I’m thinking that the ISOTed US might even start moving themselves closer to the Authoritarian regimes of the world. China and Russia certainly aren’t strangers when it comes to brutal military crackdowns and it would be a huge political win for them to entice the ISOTed US to their sphere. You get all the resources of North America in your market and you can probably get it pretty cheaply if you decide to supply the new US with outdated equipment and technological expertise.
You must log in or register to reply here.
Top
Share:
Share
Top