Another America: A Map and Graphic Setting

Yes, it's another thread of maps and graphics in an AH setting based around North America! I've been making maps and flags and heraldry in this setting for quite some time so I figured I might as well jump on the bandwagon and make a thread, which will hopefully also inspire me to keep making more maps. I hesitate to actually call it a timeline because it's more of the working backwards, based on rule of cool more than plausibility, loose interpretation of the butterfly effect school of AH. Divergences take place from around ~1600 onward and have had the effect of making a more politically divided, multilingual, and multicultural North America. I'm also working on elaborating Central and South America and possibly the rest of the world beyond that. 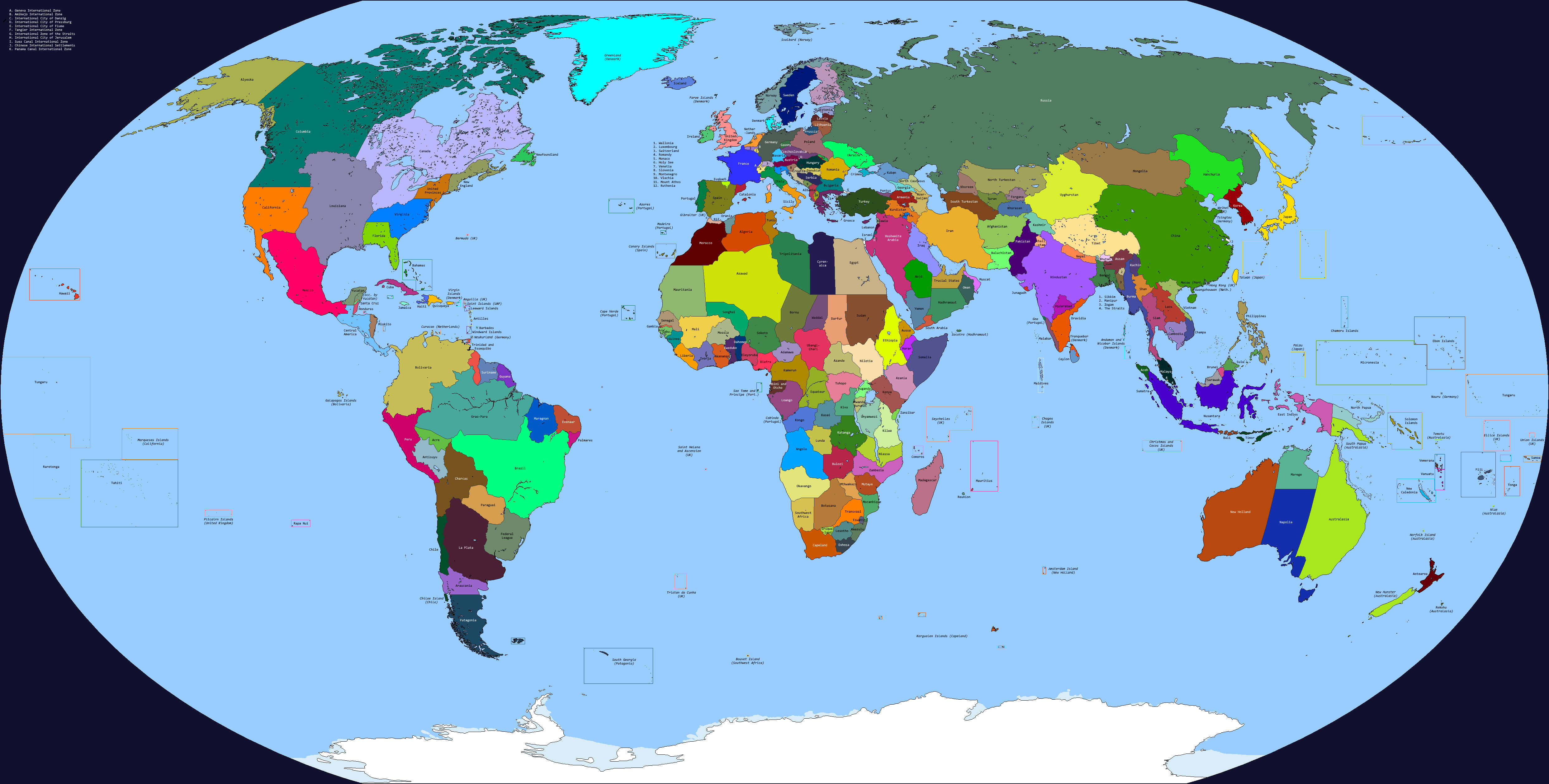 Here's the original map of North America as a whole that started this whole thing: However that's become outdated, here's a map of North America up to date to the current version of the TL: The United American Provinces were formed as a merger of the colonies of New Netherland and New Sweden and the native Iroquois League, and as a continuation of the Dutch republican government of the United Provinces after it was replaced by a monarchy in Europe. In the following decades it became a powerhouse in industry and trade and also benefited from its long-standing alliance with Acadia. Today the UAP is one of the most populous and prosperous nations in North America (disproportionately to its geographic size), as well as one of the most diverse - in addition to the founding populations of Dutch, Swedish, and Iroquois (the UAP is of course officially trilingual), as a beacon for persecuted groups and other immigrants it has become home to large communities of Germans, Afro-Virginians, English Quakers, Sephardic Jews, Javans, Caribbean and South American creoles, and more - although while tolerance and multiculturalism are celebrated in flourishing cosmopolitan cities like Nieuw Amsterdam (financial center of North America), Bronstad (seat of the North American Community), and Kristina (continuing to assert itself as a hub of Swedish-language culture), a nationalist backlash is growing in the struggling interior regions, hit hard by deindustrialization and the decline of coal. (this map is slightly out of date as per the QBAM master map; for a more in-date version (which I may get around to actually making and replacing this one with at some point) delete Nieuw Finland, separate Adirondack as its own province, change Acadia to Canada, and straighten out some of the borders)

Keperry said:
As you can see the main changes are splitting off California from Columbia, splitting off Newfoundland from New England, and splitting Acadia into Canada and Louisiana, in addition to various border changes; working on an annotated version of the latter map and in the longer run an Inkscape version as well.
Click to expand...

Loyely map! I hope we will focus on the Acadian Federation!
The Republic of Florida Between Spaniards and other European colonists, Africans (both Spanish slaves and British and French maroons), and of course the native peoples, Florida developed a distinct triracial creole culture and much of the population is of mixed descent. However, it was still dominated by the white elite for most of its history even after independence in 1821, until the Centennial Revolution of 1921 brought into power a left-wing regime. The Populists soon came into conflict with the right-wing regime of neighboring Virginia, culminating in the Virginian Civil War of 1964-1972 in which Florida intervened extensively, most notably by supporting the Gullah Liberation Army (the core of which was the Afro-Virginian diaspora in Florida), allowing them to carve out an autonomous region (and de facto sphere of Floridian influence) within Virginia. However, the ruling party was left weakened by the war and eventually accepted free multi-party elections in 1987, beginning Florida's transition to democracy, which has been largely successful other than the constant issue of corruption. In recognition of this, Florida was admitted to the North American Community in 1994 - while it is one of the poorest members it is still wealthier than most Spanish-speaking countries in the Americas. The free travel that has come along with this has allowed the Floridian tourism industry to flourish.

Worth noting are the Autonomous Nations in the northwest, whose sovereignty has been respected by the Floridian government in exchange for guarding the border (and for internal political support). They have a great deal of political autonomy (still sovereign while the other provinces are just administrative units) and influence (they have veto power over matters that affect them and tend to vote in blocs so politicians are eager to curry their favor), and remain culturally and linguistically distinct. However they also tend to lack in economic opportunity compared to the rest of the country, fueling internal migrations to tourist areas and major cities like San Agustin and Pensacola (between which the capital moved for decades before settling in its original location, the former). The arms of the Commonwealth of New England, including the arms of its five founding provinces (Massachusetts, Connecticut, New Hampshire, Rhode Island, and Nova Scotia) as well as the pine tree, pine branches, and stag's head representing the country as a whole, the lion and unicorn representing its British heritage, and St Edward's Crown representing the continued dominion of the British monarchy. The flag of the Dominion of Columbia, with pinecone, beaver, and trident representing its forests and seas.
The Troubles of New Brunswick

This is from several iterations ago so it's not quite up to date but the general idea of civil strife in New Brunswick between Anglophones and Francophones remains applicable. Looking very interesting. Wondering a few things: how did Russian Alaska fare during the Russian Civil War? Who did it support? While it is pretty close to Siberia and Eastern Russia, where there were a lot of whites, the gold mines of Alaska could serve as a flashpoint for Bolshevik agitation. Also, is California Anglo or Mexican, and how did Louisiana take Texas from Mexico?

Minpen said:
Looking very interesting. Wondering a few things: how did Russian Alaska fare during the Russian Civil War? Who did it support? While it is pretty close to Siberia and Eastern Russia, where there were a lot of whites, the gold mines of Alaska could serve as a flashpoint for Bolshevik agitation. Also, is California Anglo or Mexican, and how did Louisiana take Texas from Mexico?
Click to expand...

Alyeska supported the Whites during the Civil War and in fact ended up being the only part of the Russian Empire to remain under White control which is why it's a monarchy today, it's a Taiwan type of situation. California is officially bilingual and was founded by both Anglos and Mexicans, the Anglos have tended to have the upper hand in population and power for most of California's history but in recent decades things have been evening out. Louisiana took Texas (which was already largely populated by French-speaking settlers) in a war during the same time of political upheaval in Mexico that saw the secession and independence of California and Yucatan.

Ah, I see. Also, I forgot to mention, but I really loved the backstory for Florida. It makes a lot of sense - an independent, Spanish Florida would be sort of like Bolivia OTL. Majority native/African, but still ruled over by a white minority, so it makes a lot of sense that an MNR-style movement would take hold there.
Virginian Civil War

Wiki entry and infobox for the Virginian Civil War! The northeast coast is largely former plantation colonies (Suriname and Evenaar of the Netherlands, Guyana and Maragnan of France, Trinidad of Britain). Palmares was formed by escaped slaves and unlike OTL managed to survive here by playing the Dutch and Portuguese against each other / acting as a buffer between them. Brazil is still a monarchy, Grao-Para was part of it for a bit but split off again as an independent republic after the Cabanagem. The Spanish-speaking countries became independent similarly to OTL along with a successful Quechua and Aymara rebellion forming Antisuyu at the same time. Nueva Granada was able to balance between centralism and federalism better than in OTL and therefore stayed united. The opposite happened in Argentina and the unitarians of La Plata and the federalists of the Federal League of Free Peoples (also called Gaucheria) stayed separate; the latter admitted the Rio Grande and Juliana Republics after they rebelled against Brazil and therefore became bilingual. Paraguai started off as a Spanish speaking country but went even further with the embrace of Guarani than in OTL and eventually made it the sole official language,hence the different spelling. The British colonized Patagonia, which is now a bilingual English-Welsh (thanks to the Welsh settlement of Y Wladfa) Commonwealth realm, and helped the Mapuches of Araucania maintain their independence from Chile and La Plata as a buffer. Acre was contested by all of its neighbors during the turn-of-the-20th-century rubber boom and in the confusion ended up as an independent bilingual-Spanish-Portuguese republic. Chiloe Island, as the last royalist holdout in the Spanish American wars of independence, remains a Spanish overseas territory.

The two countries with the biggest populations and therefore the two main powers are Nueva Granada and Brazil, unofficial leaders of the Spanish and Portuguese blocs respectively. As in OTL the northeast is largely African-descended (and in some parts Asian-descended), the Andes are largely indigenous-descended, and thesouthern cone is largely European-descended (except for Araucania).
Last edited: Jun 29, 2018

Wonderful maps man, particularly Florida! I find the image of Frenchmen fighting armed resistance against Les Anglais to be an interesting analogue to the OTL Troubles.
Map of Nieuw Amsterdam Nieuw Amsterdam, capital of the United American Provinces and the province of New Netherland, and its satellite cities Breuckelen in Lange Eiland and Bergen in Pavonia, with sites of interests for visitors. The Nieuw Amsterdam area is a major economic and cultural center not just for the UAP but for North America and the world as a whole, and is renowned for its vibrancy and diversity.
Last edited: Jul 17, 2018
Flags of the Americas 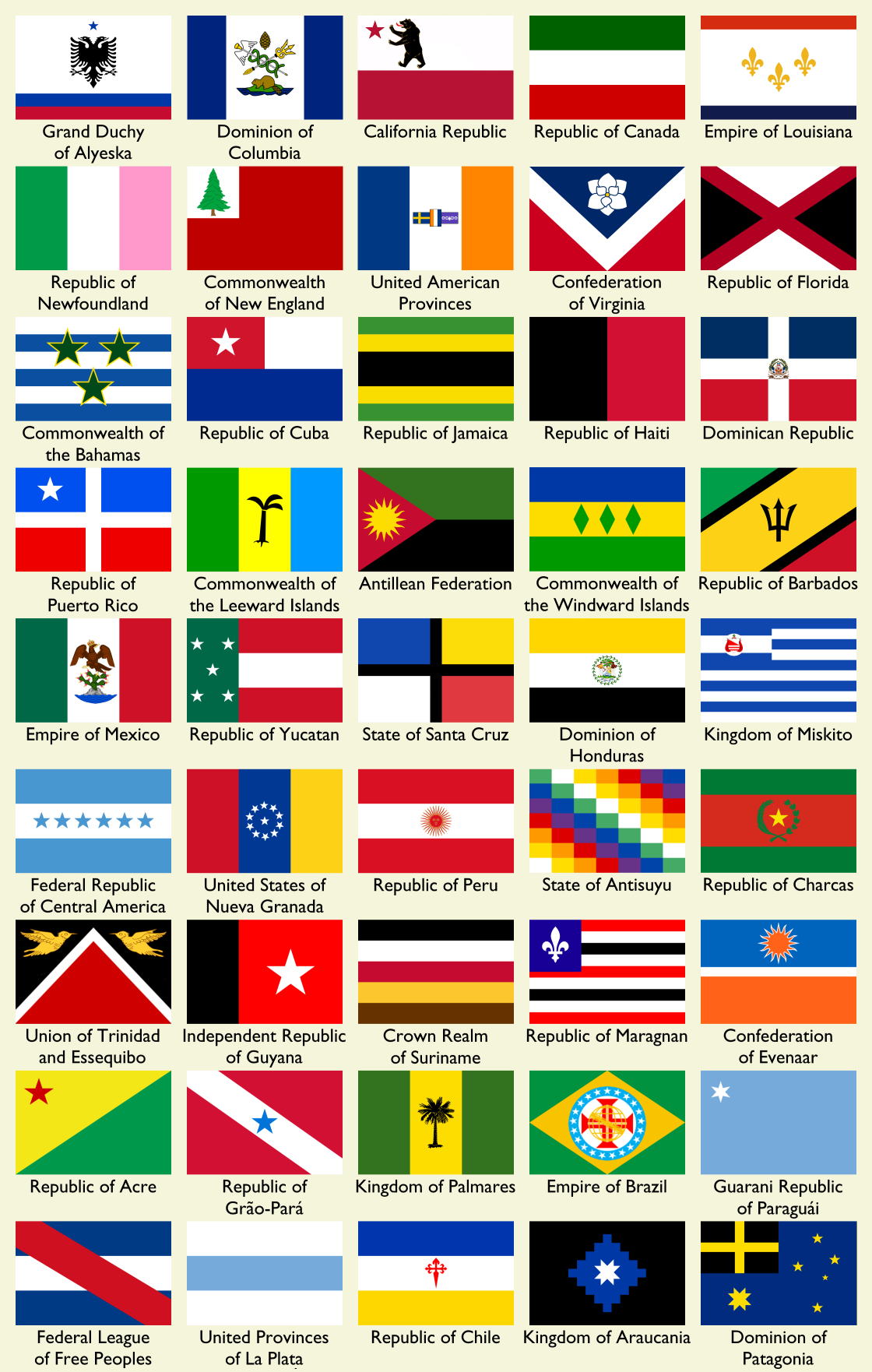 Flags! Some are from OTL (and therefore Wikimedia Commons) while others are from my abuse of my newfound power to use FlagMaker 2.0.
Last edited: Mar 23, 2019

Will we ever see a world-map of this world?

Bennett said:
Will we ever see a world-map of this world?
Click to expand...

I wouldn’t put money on it, but never say never.

Keperry said:
I wouldn’t put money on it, but never say never.
Click to expand...

Fair enough, though I would personally be fascinated in it: looking at America, it's doubtless that the Old World will be very interesting.