Petike said:
Realistically, even with some positive ATL developments that would make the Slovak film and TV industry weather the 1990s better, and offer more stuff for export than just the occassional film, there are natural limits within the distribution market and the country's soft power with helping push through and promote domestic programming abroad.
Click to expand...

Well Holmes has 'brand recognition' (though also licensing issues back then).


Petike said:
I could definitely see a Slovak Sherlock Holmes series, if done well and already popular at home, being sold abroad, at least as a bit of an experiment. Just to test the waters, whether a foreign adaptation of such an iconic anglophone property could garner attention. I know die-hard Holmes fans were appreciative of the Soviet series with Livanov already back in the day, and he still seems quite popular abroad to this day, along with the Brett Holmes and Cushing Holmes, and so on. Maybe my hypothetical Sherlock Holmes played by Martin Huba could find his own niche of appreciation in the international fandom.
Click to expand...

Well the Cushing Holmes isn't well known as few episodes have survived. The Russian adaptions are rather good, unlike most other Holmes adaptions (e.g. Baker, Lee), bur rather obscure in the West.


Petike said:
The working title for my ATL concept is the simple Dobrodružstvá Sherlocka Holmesa a Dr. Watsona ("The Adventures of Sherlock Holmes and Dr. Watson"). Abroad, in English, the series would often be nicknamed "Slovak Sherlock Holmes".
Click to expand...


Petike said:
Not sure I know of the latter, but I certainly remember that late 1970s Verne adaptation, one of several 1960s to early 1980s Verne adaptations done in Czechoslovakia. I haven't seen all of them, and I've only seen bits and pieces of that Steel City adaptation. As much as I know the source material, I don't think I've read that particular novel in detail, but I quite liked how they visualised its setting, given that they had to rely entirely on 70s film tech and special effects. I wasn't even sure whether that film and other Czechoslovak Verne adaptations (especially the non-Zeman ones) are known all that much in the anglosphere and elsewhere abroad.
Click to expand...

Steel City was broadcast by the BBC and also by RTE in Ireland. I'm not sure of the Danube Delta series's exact title but again it was carried by BBC and repeated a few times as part of the summer holiday children's programming.


Petike said:
Au contraire, why wouldn't there be ?

I think there are plenty of places in Slovakia that could be a pretty good stand-in for Victorian Britain, though it would be a fair bit tricky.
Click to expand...

Ah, my mistake, I assumed from earlier comments there'd be a lack of suitable architecture et cetera.


Petike said:
Seems you're right. I really didn't know that about Cadfael, but perhaps I'd notice it again if I rewatched some of its episodes. There is some good medieval architecture and there are some nice landscapes in Hungary, so it's certainly not impossible. Never would have thought that series' cast was ferried to 90s Hungary to do the shooting.
Click to expand...

I suspect cost savings and the cheap and easy availability of suitable backdrops.


Petike said:
That's a really intriguing concept, but given the state of Slovak public television in the 1990s, it would simply be far too expensive for the era. They did eventually do more expensive co-productions with others, and the pace has picked up again this century for higher production values programming, but in the 1990s, a Slovak-Irish co-pro would be overly difficult. Especially if Slovakia was ultimately the junior partner in the whole thing.
Click to expand...

Alas I have to agree.

I love how you're showing such imagination, although I must confess I'm unfamiliar with the Slovak film & tv industry.
I think an interesting one would be an Austrian production starring Christoph Waltz as Holmes. My family and I spent Christmas in Europe, starting in Vienna. The atmosphere and architecture was extraordinary and would be perfect for a victorian setting. There were even numerous occasions where I saw actual horse-drawn carriages!

WhovianHolmesianChap said:
This is based off of an actual 2002 adaptation with most of the same cast, but with Grant as Stapleton and Roxburgh playing Holmes. Which reminds me I should probably (and regretfully) replace Nettles with a younger actor so as to be book accurate. I've also added Nicola Walker as Laura Lyons.
Click to expand...

I like Roxburgh as Holmes in the original version. But Richard Grant would be a interesting choice.

WhovianHolmesianChap said:
Sherlock Holmes & the Case of the Silk Stocking (2004)

Written by Allan Cubbitt
Directed by Simon Cellan Jones
View attachment 547842
A BBC/PBS co-production. Set in 1903, the plot follows Holmes as he does battle with a serial killer of young women. The film received a mixed reaction from critics and fans alike, although the performances of Pete Postlethwaite and Philip Jackson received praise. Recently Sherlockians have come to view the story either as an underrated cult classic, or an entertaining guilty pleasure.

I wish that Postlethwaite had played Holmes . He have been interesting.
He also have been a interesting Watson .

Petike said:
Honestly, the casting is pretty well done. Postlethwaite as Holmes is an awesome idea. (Also, I could imagine him as a good Moriarty.)
Click to expand...

Postlewaite is one of the few actors, I could see in any of the major roles . He have made a good Holmes or Watson or as you suggested Moriarty .

I'll create the promised mystery AU thread when I've finished my introductory post: a 30s film version of Murder on the Orient Express. However, I'd like to know; would anybody be interested in a Marvel/DC thread?

I'm on board for this part of your idea!

unclepatrick said:
I know that a couple of the Lupin stories feature a character that is clearly Holmes but he was not called that because of copyright.
And I know that over the years , there been a number of adaption of Lupin Stories on French TV.
But has any of the Lupin stories that feature Holmes ever been adapted for TV?
Click to expand...

Accord to iMDB the third episode of the 1971 Arsene Lupin series started Herri Virojeux as Herlock Sholmes .
As did a episode of the 86 series with Iossif Surchadzhiev as Sholmes

Has anyone suggested Muppets Sherlock Holmes yet?

unclepatrick said:
Accord to iMDB the third episode of the 1971 Arsene Lupin series started Herri Virojeux as Herlock Sholmes .
As did a episode of the 86 series with Iossif Surchadzhiev as Sholmes
Click to expand...

I recently ordered "The Exploits of Solar Pons" and the owner of the bookstore added a bonus booklet-sized reprint of the 1892 "The Adventures of Sherlaw Kombs" by Robert Barr. It's a tongue-in-cheek parody, that takes a gentle poke at the Holmes persona. The story even has custon done illustrations. Quite well written and I enjoyed the quick read.

"He (Kombs) generously put away his violin, for he had a sincere liking for me...."
Click to expand...

*edit* This would be a Martin Clunes/Stephen Fry type of short TV episode.
Last edited: May 18, 2020 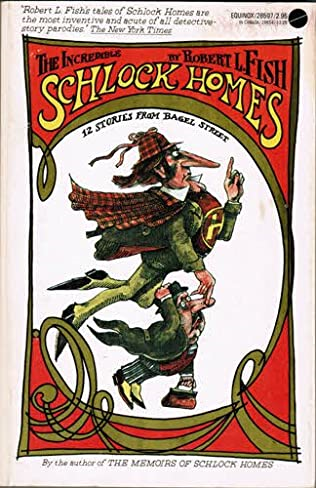 A fake picture from the TV Times. I tried to go for two actors I thought fitted the Doyle descriptions. We have the "excessively lean" Granville Saxton and his "hawk-like nose" with Nicholas Clay, who should certainly pass for "a middle-sized, strongly-built man -- square jaw, thick neck". 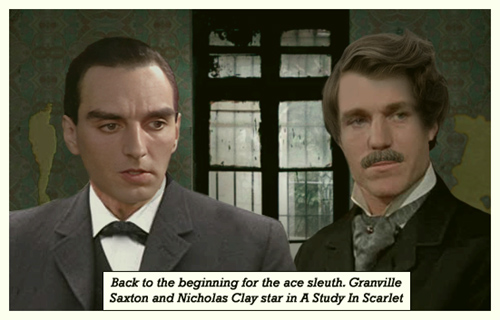 Guajolote said:
A fake picture from the TV Times. I tried to go for two actors I thought fitted the Doyle descriptions. We have the "excessively lean" Granville Saxton and his "hawk-like nose" with Nicholas Clay, who should certainly pass for "a middle-sized, strongly-built man -- square jaw, thick neck".
View attachment 550585
Click to expand...

Looks splendid.
Threadmarks
You must log in or register to reply here.
Top
Top