deleonism said:
It's a cool concept, but a key would be very useful! Right now there's no way to tell who's who.
Click to expand...

Thank you for the advice! I have made a key for these nations, but I am not very good with names, so it's still mediocre. I have also started on the second map, no key yet, though. The second map is 300 years later, at 2700 "BC"
Edit: Punctuation

AlternateHistoryFan0507 said:
Thank you for the advice! I have made a key for these nations, but I am not very good with names, so it's still mediocre. I have also started on the second map, no key yet, though. The second map is 300 years later, at 2700 "BC"
Click to expand...

Sir-Conor said:
I have also been making a map of the Worldwar Series but the race is divided between two empires in a coalition.

I absolutely adore this! Can you please finish it?

New lords in the North

2.7 million years ago, there was the Great American Interchange; various antecedent animals that originally roamed the North American plains swapped places with animals that wandered South America. The descendants of these North American animals would be later recognized as animals such as the llama, cougars, spectacle bears, and tapirs. A series of events lead to mass extinction in the American wildlife: the arrival of Paleoindians and the last glacial period came to an end. These two were pivotal to the removal of megafauna from both North and South America. Though, what if the off chance that Paleoindian hunting wasn't as harsh, the species such as the American horse: the Equidae, the Gomphothere (similar to elephants but not in the same family), and so forth managed to survive. This would provide The Paleoindians with the chance of domesticating these creatures as their "old world" counterparts did. Despite everything I said, the lack of any real domesticated animals in North and South America had no major fault to the development of civilizations in the Andes, Mesoamerica, and the Mississippi. In fact, these civilizations were often in higher regard to their old-world counterparts. Unfortunately, this lack of domesticated animals led to the lack of any animal-based disease immunity. The introduction of domesticated animals into American societies would fast-track the transition from hunter-gathering to agricultural city state-based society. This rapid centralization of peoples would frame a pan-continental system, something that lacked in the Americas compared to Eurasia.

To not get my head stuck in a rabbit hole and have to deal with the massive repercussions of a POD 10,000-20,000 years ago, I'll maintain otl cultural bases relative to their historical spots (ie. Mayans in Yucatan.) The map currently takes place around 1500 CE, the Mississippi culture, with the reintroduction of horses after trade between the Andes to Mesoamerica to Ardioamerica would develop into the Egypt of the Americas. Californian natives would quickly move out of the hunter-gathering lifestyle and transition to nation-states such as their Mesoamerican counterparts. The Mayans and Incas (or w/e Ande civilization that may take its place in a possible future update) developed better seafaring ships, traveling through the Pacific and the Gulf of Mexico; the Mayans themselves developing small colonies such as the Greeks did.

Any suggestions, interesting facts, or whatnot would be appreciated; as my knowledge of pre-columbian America is mild at best. 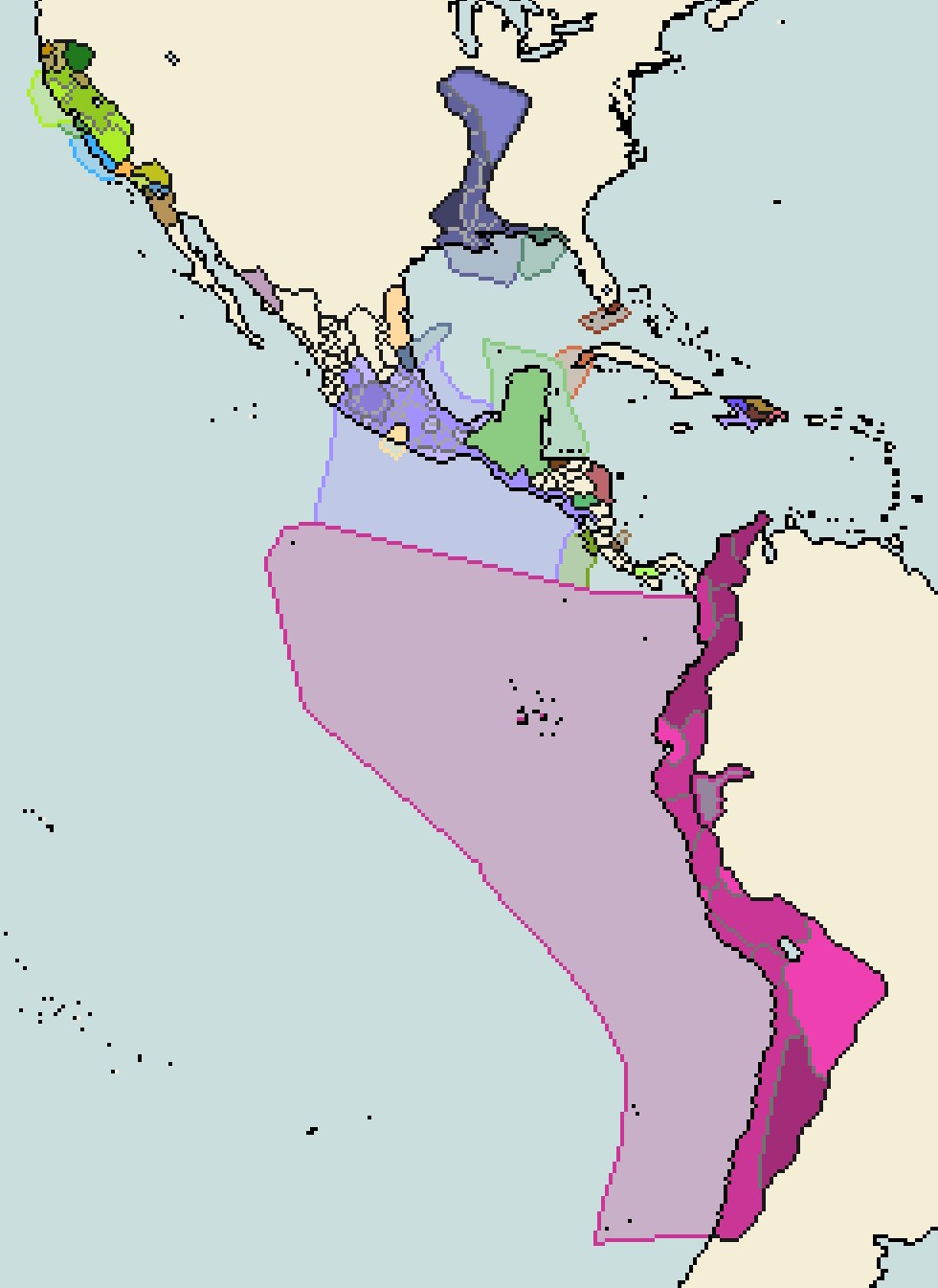 perhaps some proto-states on the east coast?

Also the government of Kongoland is banning anime
You must log in or register to reply here.
Top
Top