KolyenuKS said:
1. Closer to Syndicalism, but yes
2. Correct, but china actually has Pseudo-Communism as one of it's major Political Parties
3. Nope, Italy and Greece are Nationalist-Monarchism, while Korea has one of the 3 major sects of Corporatism (Kimist, Castroist, and Moroccan)
4. Germany's Monarchist, just less on Nationalism (think Kaiserreich, rather than Medieval), and the UK's basically Anarcho-Syndicalism, and is currently in a losing war with Scandinavia (one of the major Liberal Democracies, along with Australasia (New Zealand's the main dude here), and China)

The main idea for this map, is to have a semi communist world, without the USSR and PRC.
Click to expand...

Nice. Otherwise Nationalist-Monarchism and Corporatism seems pretty close to original Italian Fascism to me but I get your point. Also I would like to say that I only realised that Britain was losing a war to Scandinavia just now when you said it. I thought it was a Scottish War of Independence going on but looking at the map more closely it is the Scandinavian/Swedish colour.

Oh my tell me more about that Syria.

XFE said:
Oh my tell me more about that Syria.
Click to expand...

By the time of the *Mongol conquests, Rome lost all its Middle Eastern possessions (except for the coastal Anatolia) to Persia.
When the Mongols destroyed both Rome and Persia, this strange Persian-Roman mix appeared on their ruins.

A variation on the "12 countries" meme featuring iterations of a certain subgenre (possibly sub-subgenre, depending on how you want to look at it) of alternate history.
Click to expand...

those are some interesting internal borders in that america 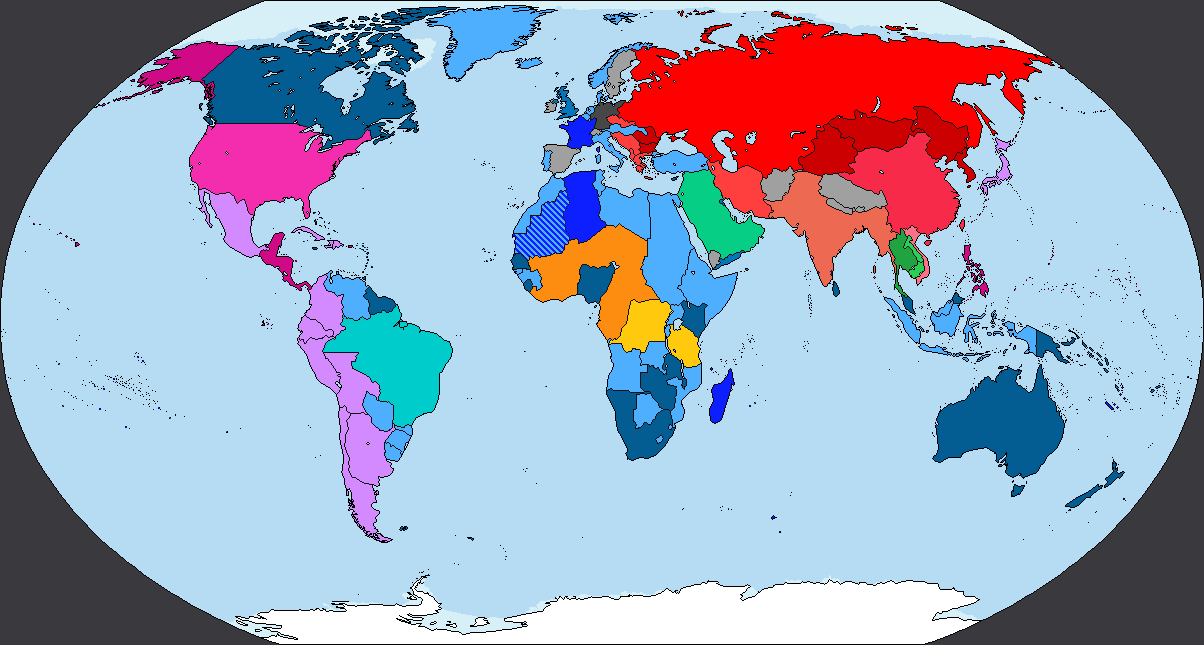 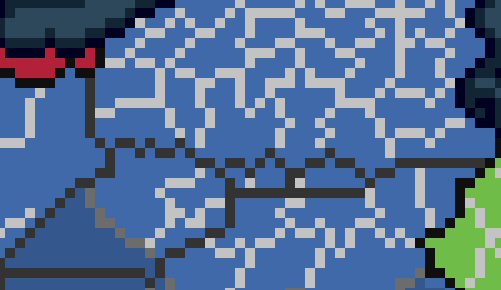 well this is a mess.

Something something Transvaal civil war ends in a split with Schoeman breaking off with east-north transvaal durably, then Prussia-North Germany/Germany getting to Delagoa bay to support them, while OFS and west transvaal unite, before being subdued by the UK and integrated into a loose South African Commonwealth

Doubt i'll do more, just some stupid idea i had

A variation on the "12 countries" meme featuring iterations of a certain subgenre (possibly sub-subgenre, depending on how you want to look at it) of alternate history.
Click to expand...

This seems interesting, how does it work?
What does each row and collumn mean? 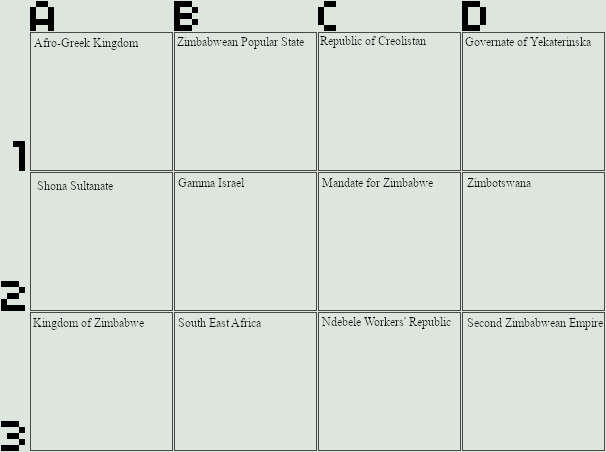 A 12 Zimbabwes meme that I've put on infinite hiatus.

Alexander the Great's fleet ends up in Africa in an accidental shipwreck, treks into the interior, and mixes into the native population.

Just need to finish some labeling but this is an idea for timeline where the Bourbons win the War for Spanish Succession in Europe meanwhile in North America Queen Anne's War goes much better for the British with New France and Spanish Florida being captured by the British. 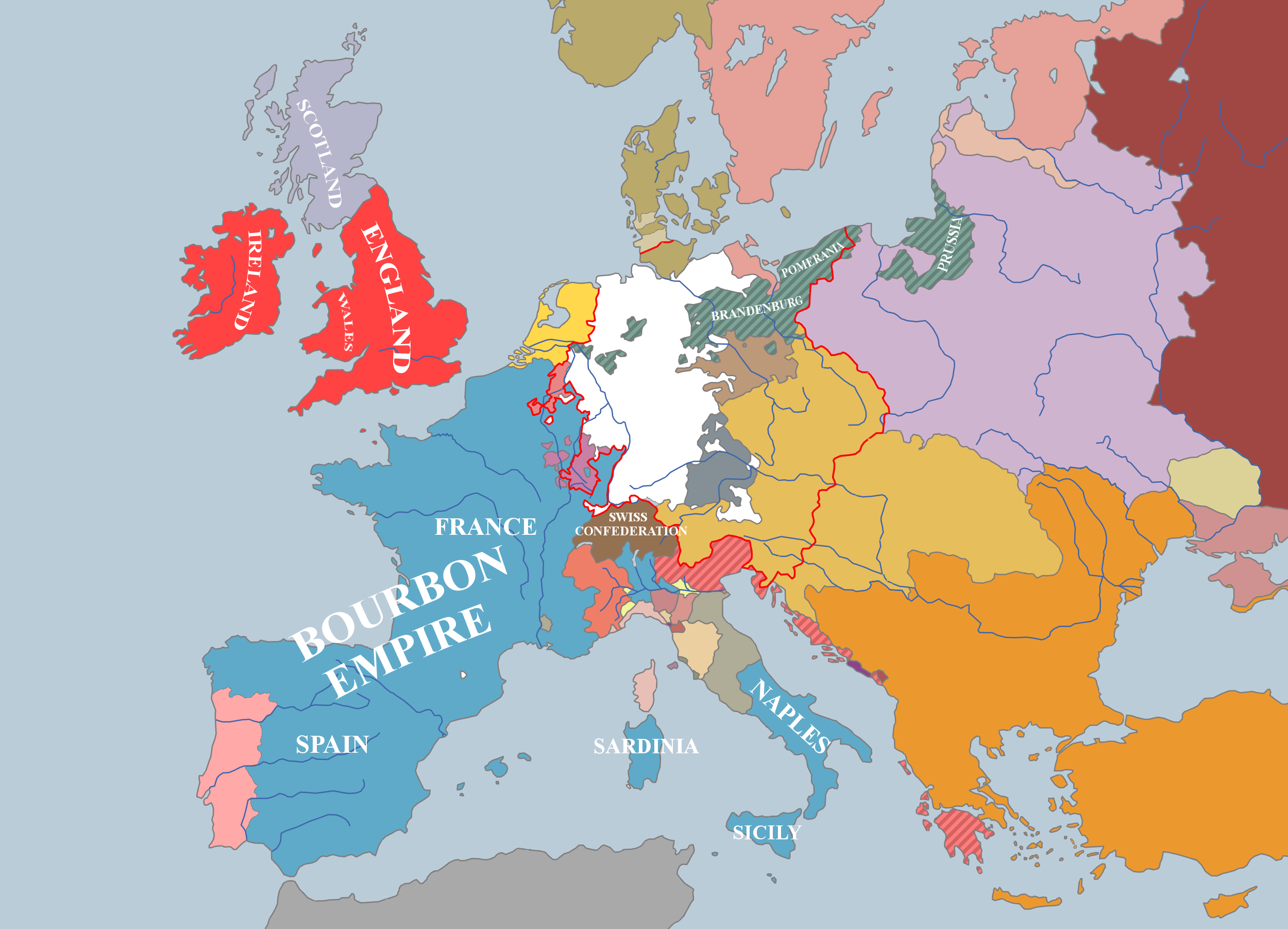 Višeslav said:
This seems interesting, how does it work?
What does each row and collumn mean?
Click to expand...

The rows and columns aren't really organized in any particular order. I don't want to spoil the premise, but if you want a hint as to what the whole thing's about, check the file name. 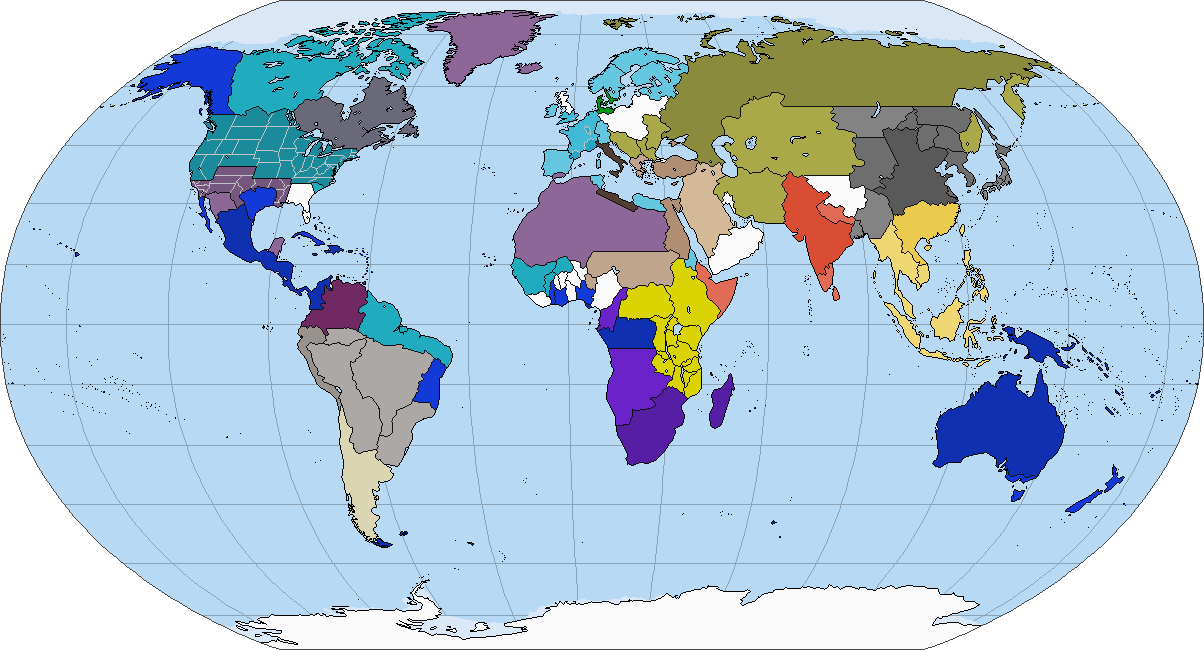 What did you do?

TheDetailer said:
What did you do?
Click to expand...

Long story short, I read through the old Tossed Through Time map games and got a lot of extremely bad ideas. 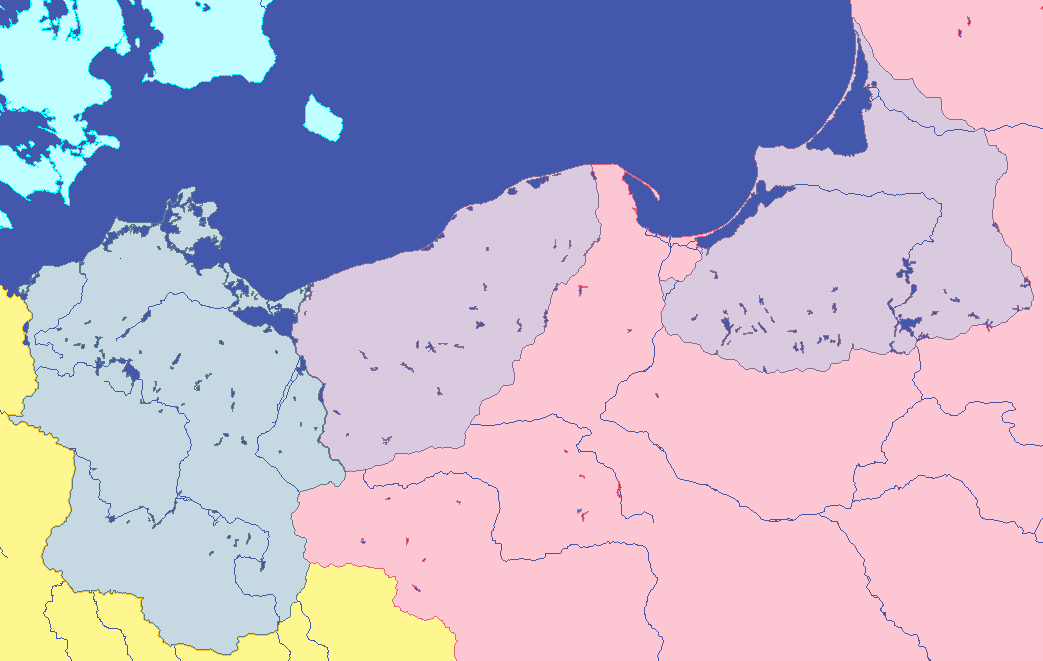 Alexander North said:
Long story short, I read through the old Tossed Through Time map games and got a lot of extremely bad ideas.
Click to expand...

The current plan is to turn it into a short map series- at the very least, I want to have separate maps showing languages, religions, and forms of government. Here's a few brief snippets from my notes, just as a teaser:

"Republic of New Serbia: in Ontario/Quebec/etc., ISOTed Vichy France/Acadians were later taken over by Serbians from the 1990s, now a majority-French state with a Serbian ruling class"

"Scythian Confederation: in northern Arabia, ethnically Scythian with some Maghreb, various Indonesian, Polish, and Mixtec mixed in over the years, majority-Muslim with large Jewish and Christian minorities, especially around Jerusalem, ethnically Polish separatists in the east"

"Confederation of Great Catalonia: in Ukraine/Caucasus/Russia, initially a patchwork of sparsely-populated Moroccan, Roman, Sudanese, Cambodian, and Indian states in Ukraine and the Caucasus before Catalan anarchists were brought in and took over, becoming the ruling class, later expanded east as other Catalan areas from the 1980s to the 2010s appeared in their already-existing territories and farther east, forcing them to modernize, grabbed Siberia off of the failing Confederate Khaganate, is now a pretty decent republic after the anarchists were thrown out"

"United Kingdom of New Hesse: in South Africa/Mozambique/Madagascar, German/English royal family, middle class is mostly black Americans from the 1870s-1900s, lower class is mostly Welsh, Croatian, and Romanian, though they all speak accented English by now, constant enemy of the Carteldom of Nueva Mexico before its collapse, obsession with dragon imagery to the point that the royals even have massive tapestries and murals of what they would look like as dragons, Madagascar is a dual nature reserve and autonomous area for the Kabiye, Yolngu, and Ngandi peoples who were ISOTed there before New Hesse began settling the island"

But really, I haven't seen an new 'so and so nations/states' in awhile, and I don't think they much for Zimbabwe on the site, as least as it own thing.

Afro-Greek, and Gamma Israel really got my attention, same for an 'Second Empire' deal you got there.

Even if on long-term hitatus, I still love to see this.
You must log in or register to reply here.
Top
Top