Undeadmuffin said:
I kept them mostly for visual reasons
Click to expand...

Yeah they do look pretty cool.

@e of pi what document was that drawing in if you don’t mind me asking?

Undeadmuffin said:
I kept them mostly for visual reasons
Click to expand...

Could you go with solid hatch outlines, and then a smaller center porthole (maybe 4-6" in diameter) and get the interest you're looking for? I think having 8 hatches is silly, too, but it was the historical proposal for whatever silly reason.


RJGFox said:
@e of pi what document was that drawing in if you don’t mind me asking?
Click to expand...

I actually don't know where I got them, they're not originally my images. They're possibly from the depths of some NSF thread on Big G. The report is titled "Report H321" at the tops of the images:

EDIT: Seems like it's from someplace in this thread, likely from Blackstar who had access to the hard copies and mentions other images:

Tally-ho! Atlantis rockets up to the waiting Space Station Enterprise in the latest installment of "Boldly Going" by @e of pi and @TimothyC 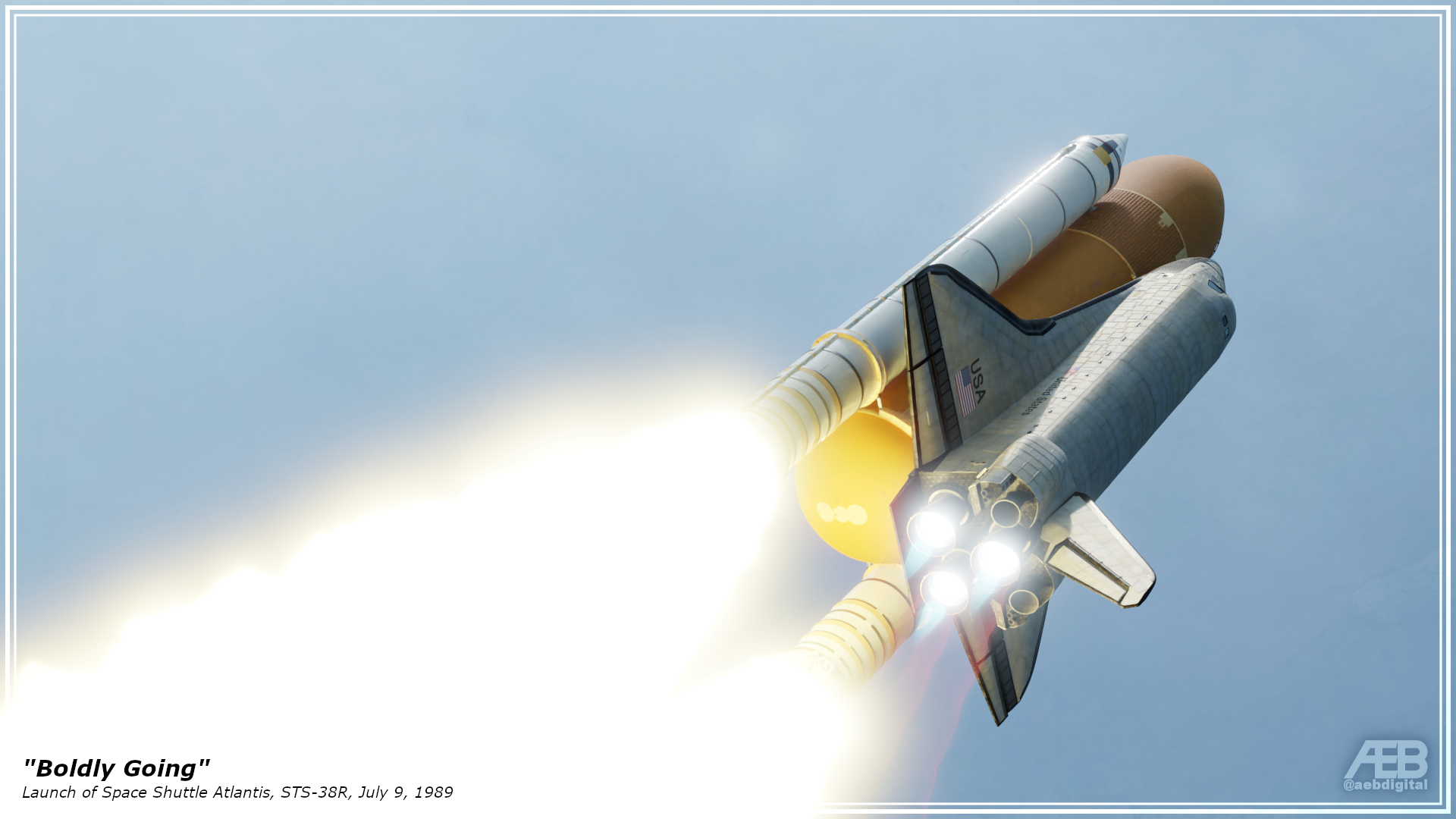 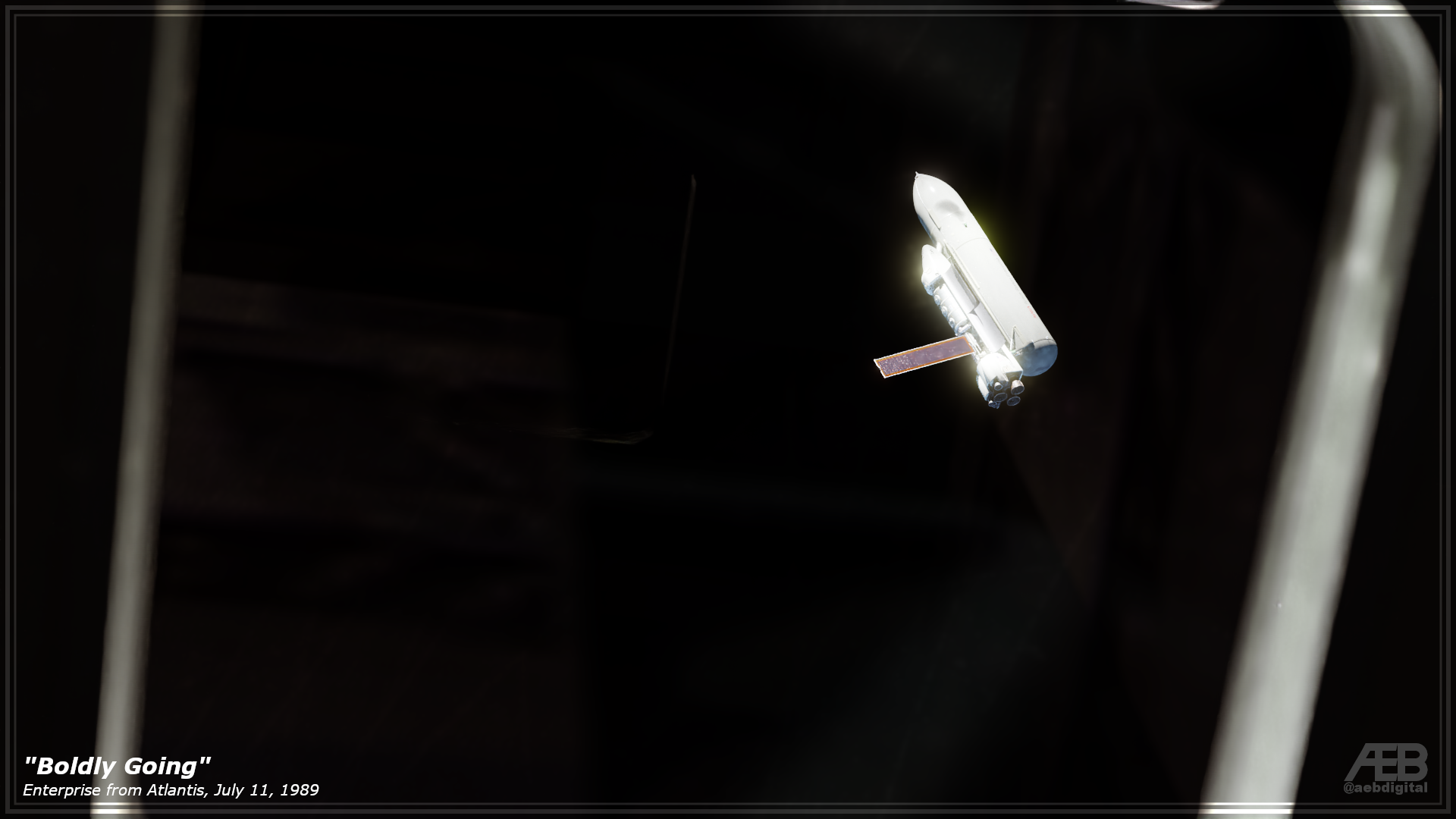 nixonshead said:
Tally-ho! Atlantis rockets up to the waiting Space Station Enterprise in the latest installment of "Boldly Going" by @e of pi and @TimothyC <snip>
Click to expand...

These are just beautiful. Great job.

Since the thread is dedicated to aviation and flying machines I wanted to ask questions to connoisseurs.
In the movie Castle in the sky by Hayao Miyazaki there is a military airship named Goliath. Although I couldn't find any information about the size and the different resources I tried to list them with picture of illustration. 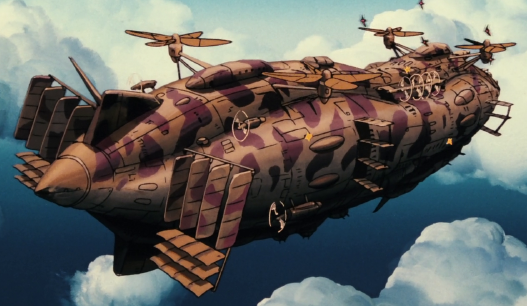 The particularity of the aircraft is that it is totally rigid, its entire surface is solid and accessible to the crew. The latter is also extremely numerous (several hundred in the film) and the Goliath is heavily armed.
So I wanted to know if it was theoretically possible for a state of the early/mid-twentieth century to build such a machine? I think that even if we don't see it there must be a huge balloon being at the buoyancy of the device (I couldn't find any cuts of the device). Moreover the device has four enormous propellers allowing it to regulate its height in part.
But is this enough? If not, it should be more.
Finally a last question which has its importance is to know what military interest the airship would have? It could be fragile compared to the rest of the aviation it would have to be limited. But a state capable of building an airship of this size would rather have started to build planes or smaller airships. How to get out of this paradox?
I would be happy if someone would answer me because I am far from being a specialist in flying machines.
Last edited: Jan 16, 2021

Next update from "Boldly Going" by e of pi and TimothyC. All images I've done for this timeline (and lots of others) can be found on my DeviantArt. 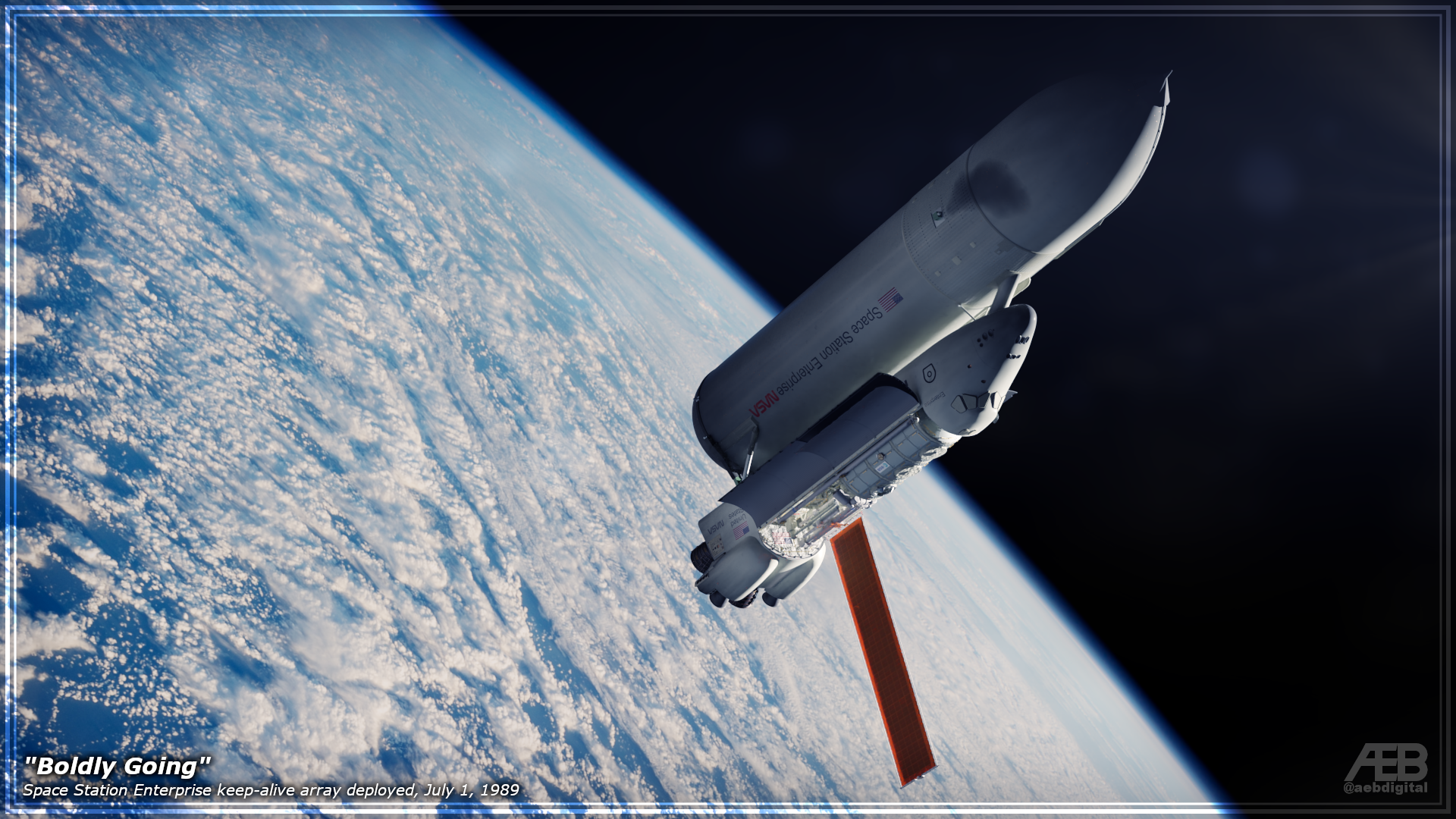 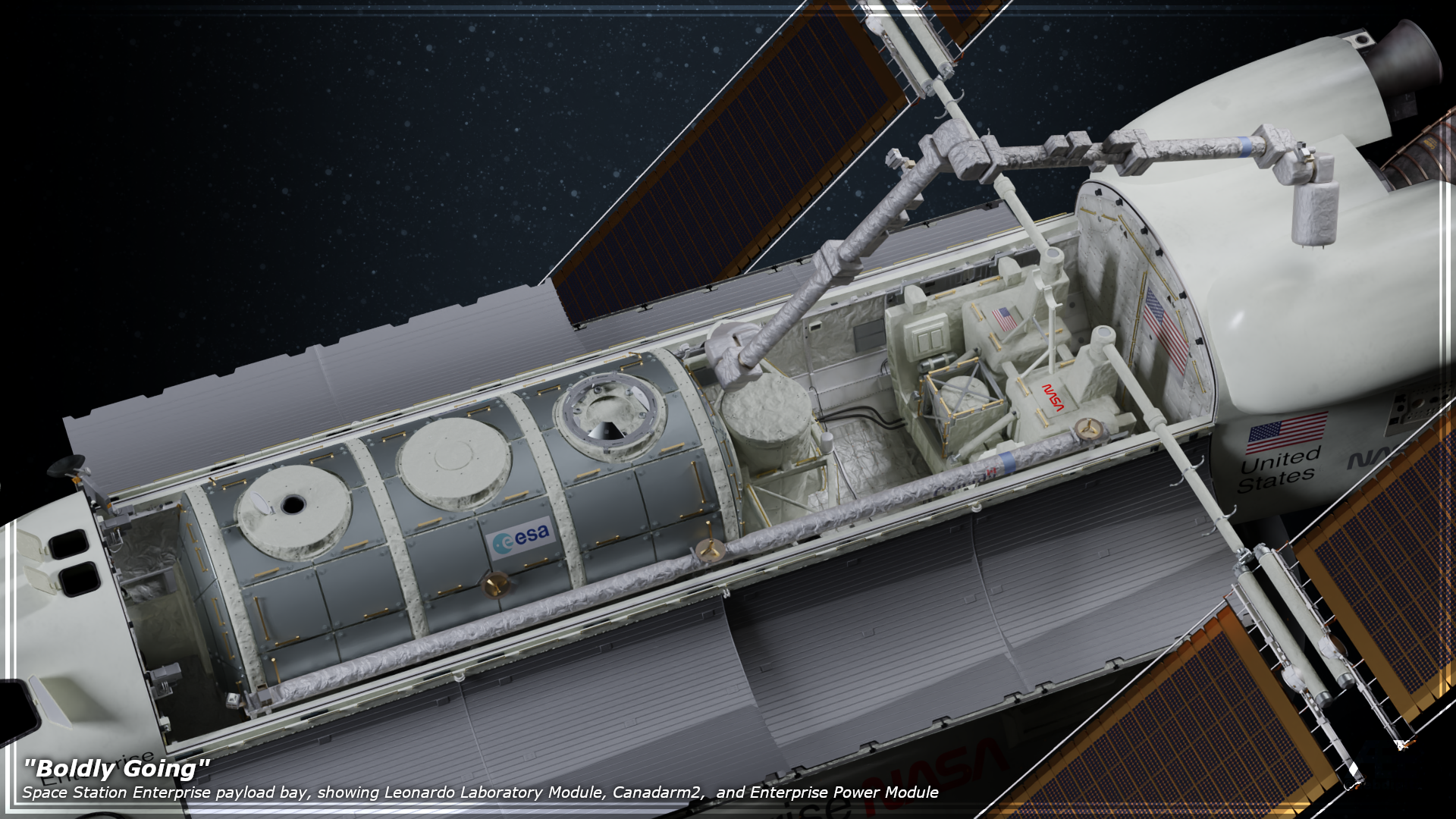 In 1939 Bularia ordered 50 Avia B.135s for domestic assembly from parts manufactured in Czechoslovakia, but Germany cancelled the order and took the aircraft for Luftwaffe use as fighter trainers. Ironically, during 1942 and 1943, several Luftwaffe B.135s were based in Bulgaria at Plovdiv. Officially they were on a training mission known as Kommando Riewoldt, providing Bulgarian, Croatian and Luftwaffe pilots with fighter combat experience. However, little training was conducted.

In reality, the lightly armed Avias were used in cross-border counter-insurgency missions against Yugoslav and Greek partisans. The idea had been to use trainers that would attract little attention for light COIN missions, Kommando Riewoldt deployments also taking place in Poland and occupied areas of the Socialist Union until mid-1943. Although judge by Goering as successful, Hitler ultimately declared the outcome as "overrated" and ordered the cessation of the program.

Following the overthrow of the Nazi regime in July 19944 and the Spererate Peace with the Western Allies in August, Austria was freed from the Nazis but was not entirely free. Instead, it was effectively divided in two; those parts occupied by the Western Allies and that part designated for occupation by the Socialist Union. In the latter region, the Germans aided the establishment of the Free Austrian Republic. This entity establsihed an air force in September 1944.

The Free Austrian Air Force was formed with a fighter force based around the Bf 109G-6 and G-10. Many of the G-6 airframes were second hand and as the Austrian has a low priority when it came to the allocated of new fighters, several Austrian Bf 109 airframes came to have components from both the G-6 and the G-10. This aircraft, which landed by mistake at a U.S.A.A.F. base in May 1945, was one such hybrid. The arnament includded the G-6/R6 kit of two 20 mm Mauser MG 151/20 in underwing gunpods and the G-10/U4 standard 30 mm MK 108 Motorkanone cannon firing through the propeller hub. Curiously, and apparently to save weight, the cowling weapons had been removed. The pilot, Major Florian Grünwald, explained that the aircraft had been a G-10/U4 that had been involved in a landing accident in late 1944 and been locally rebuilt, the head armour, underwing cannon and cowling having been canniblised from G-6 airframes. He said that this aircraft had been modified to perform "heavy strafing" of Red Army vehicles. 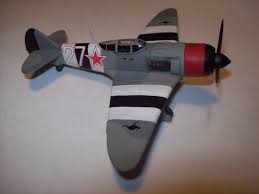 
Dawn Fraser grew up in Wonthaggi, Victoria, the tom-boy daughter of a fitter and turner and union activist who worked in the town's State Coal Mine. At the age of 19 in 1937, she left Australia and traveled to Europe, finding work in England in 1938 for a travel company that specialised in helping people fleeing Nazi Germany. Here she also joined the Trotskyist Socialist Workers Party, but became confused when the party refused to join the war effort following the outbreak of WW2 in September 1939. Seeking refuge and understanding, Dawn traveled to the still neutral Socialist Union in early 1940. Here she enrolled in an aeronautical mechanics course, fulfilling a dream that began with a childhood crush an aviator Amelia Earhart.

In late 1943, the IVEs began a program of training selected mechanics to fly, at first to conduct post-maintenance check flights and ferry missions, but those who showed promise could go on to be trained as combat pilots. Dawn was trained to fly by 1944 and flew a La-5FN to Poltava in June as part of an goodwill visit to meet the visiting American bomber crews during Operation Frantic. It was here that Fraser caused a minor international incident when, after some heavy drinking, she climbed a flag pole and stole the American flag flying over the base. The fact that she and others later burnt by now vodka soaked flag (thus bringing attention to themselves) only made matters worse. Although the Americans were incensed and demanded action, the Reds and the Internationals protected Fraser and she was duly given a promotion. When the Western Allies signed their Separate Peace/Great Betrayal with Germany in August following the coup against Hitler, Fraser chose to stay on and "finish the job of bringing Socialist liberation to Eastern Europe".

Fraser's first air-to-air kill came in February 1945, when she shot down a Fw190A-8/U16 of 316 Squadron, Polish Air Force. To celebrate, Fraser added not a red star kill marking to her plane (by now a La-7), but a red kangaroo (as befitted her nickname of Red Roo, a reference to her politics, her nationality and to her red hair). A second red kangaroo was applied in April, after shooting down another Polish Fw190, this time of 303 Squadron. At around this time, large black kangaroos were added to the wing upper surfaces of her La-7; many other internationals also added black national symbols to their aircraft wings at this time. The choice of black signified that their homelands were still in the "grip of capitalist exploitation and slavery".

In June 1945, 751 IVE moved East to Siberia in preparation for the Manchurian Strategic Offensive Operation; the launch of an offensive against the Japanese. Before the Great Betrayal, the Reds had agreed to wage war against the Japanese 3 months after the cessation of hostilities in Europe, but with the war on the Eastern Front ongoing and the Western Allies poised for victory over Japan, Moscow decided to make their move in early August, 1945. On 9 August, Fraser joined the attack from the unit's base at Galenki. Like other aircraft in the campaign, Fraser's La-7 now sported large black and white "liberation stripes". These had been adopted to avoid Red-on-Red friendly fire incidents, as both the Reds and the Japanese used red markings on their planes. It was this that forced the Western Allies to change their planned replication of D-Day invasion stripes for the upcoming invasion of Honshu to the more colourful yellow and orange stripes. Fraser, being a fan of the Australian rules Collingwood Football Club, called the stripes her "footy jumper".

0n 19 September, Fraser moved forward to Mukden with her unit and in November to Wonsan in northern Korea, where they flew patrols as part of a deception plan to make both the Western Allies and the Japanese think that the Reds were about to invade Hokkaido or Honshu. 175 IVE stayed on these duties until the end of the war in May 1946. Fraser stayed in the Socialist Union and became a pilot with Aeroflot for the remainder of her professional life, never returning to Australia.

Ever done a spacewalk indoors?! More goodness from "Boldly Going" by @e of pi and @TimothyC 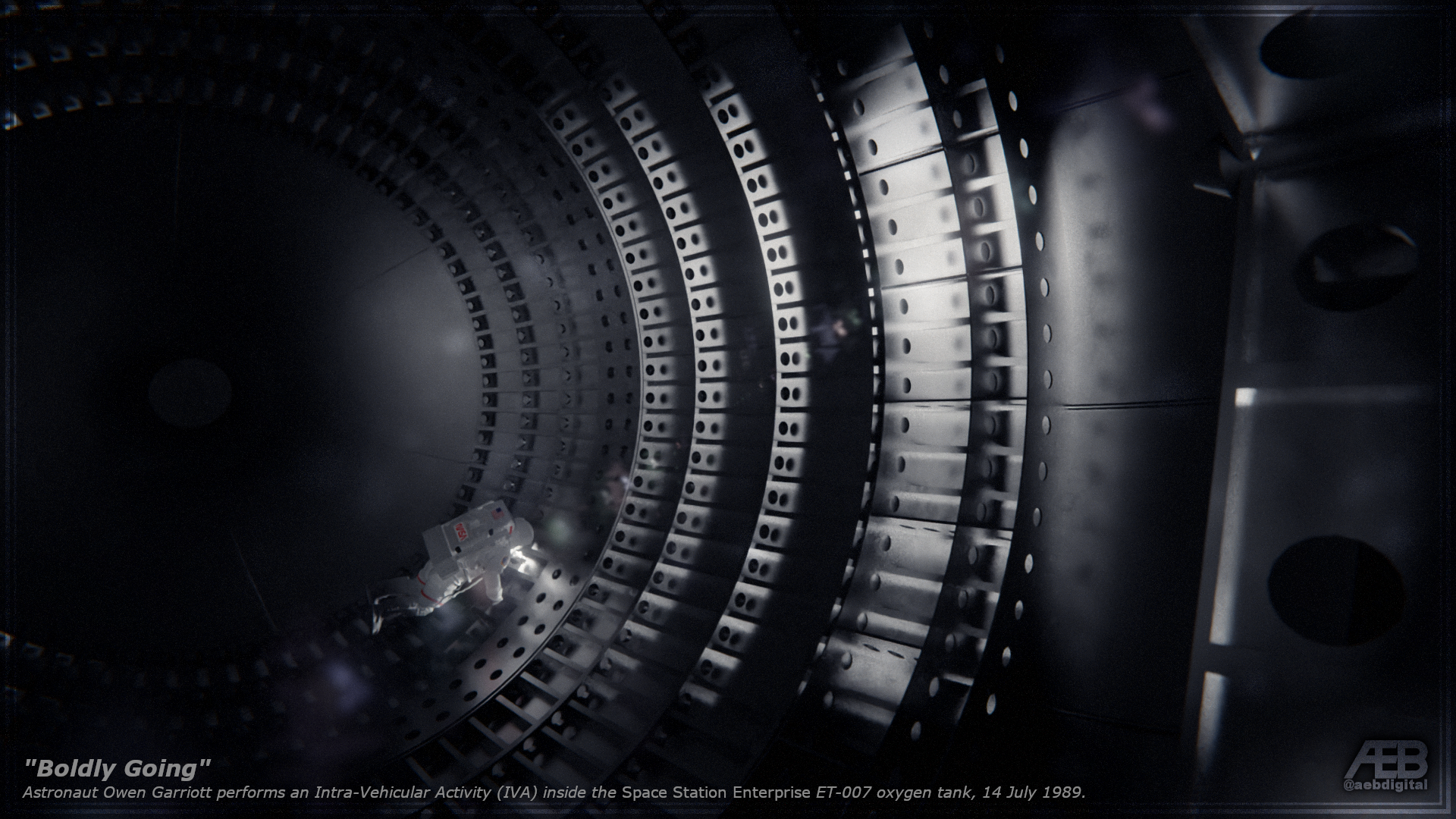 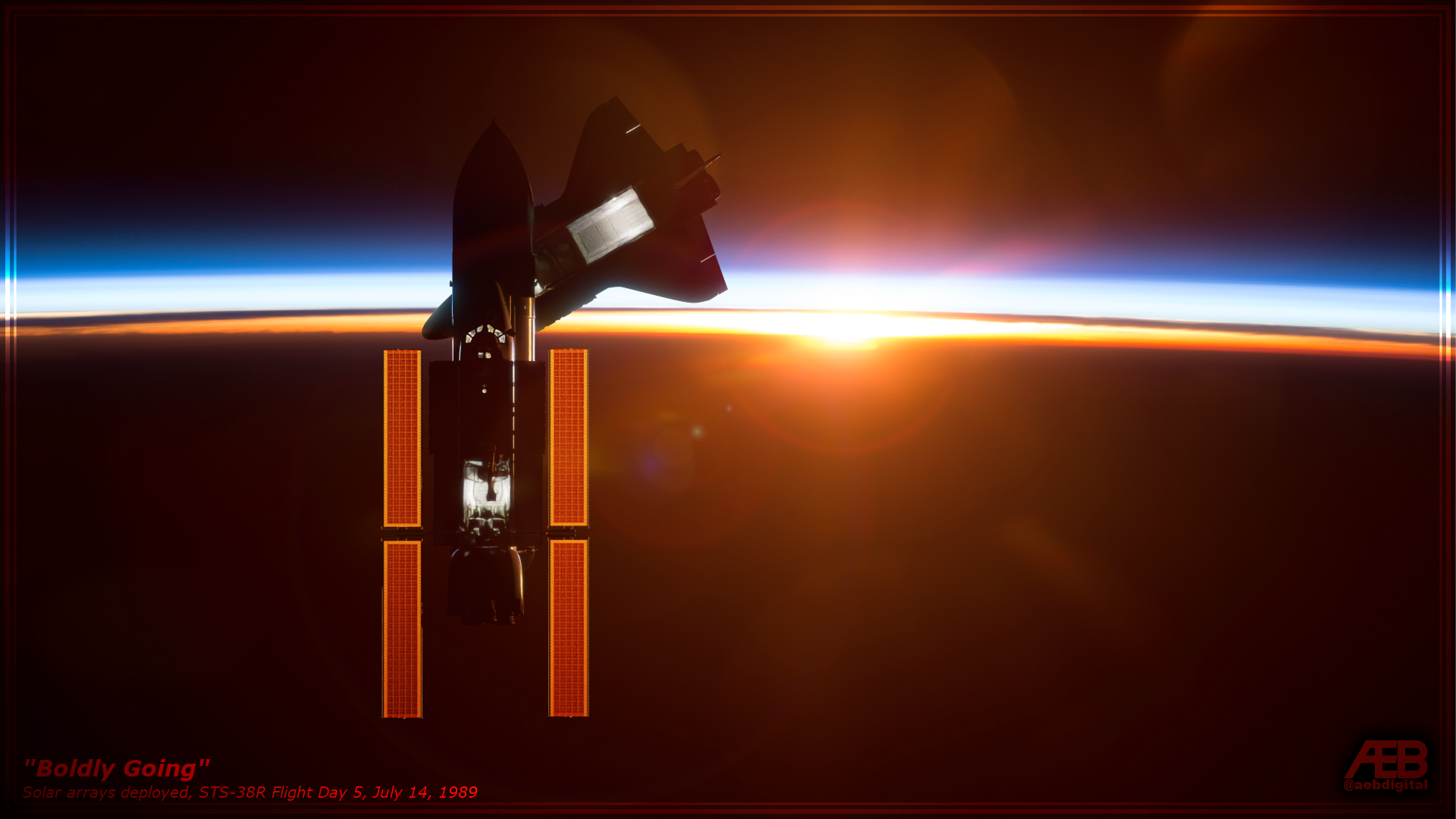 nixonshead said:
Ever done a spacewalk indoors?! More goodness from "Boldly Going" by @e of pi and @TimothyC

It's actually over half again as large at about 560 m³ while Skylab was only about 360 m³. 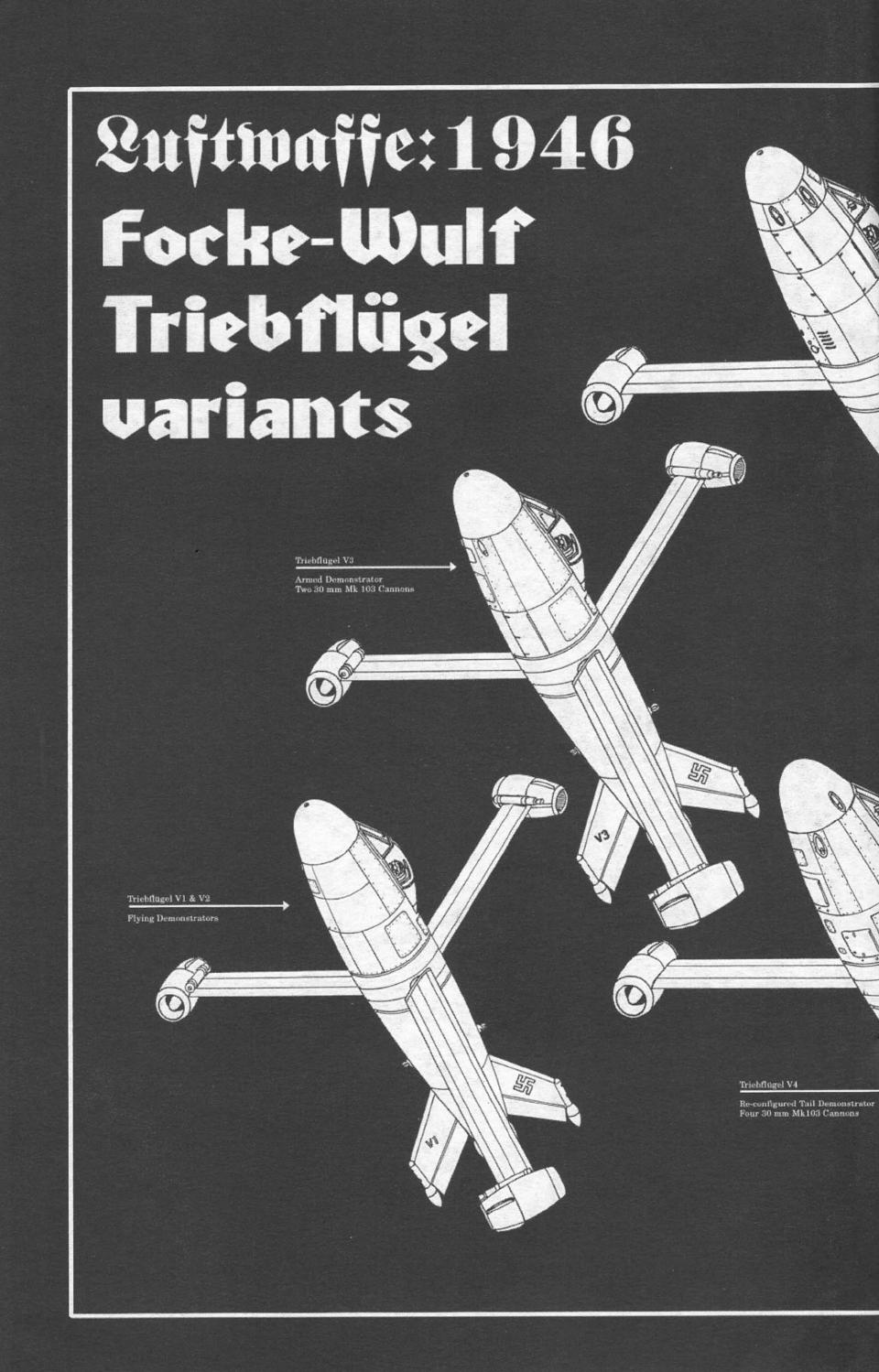 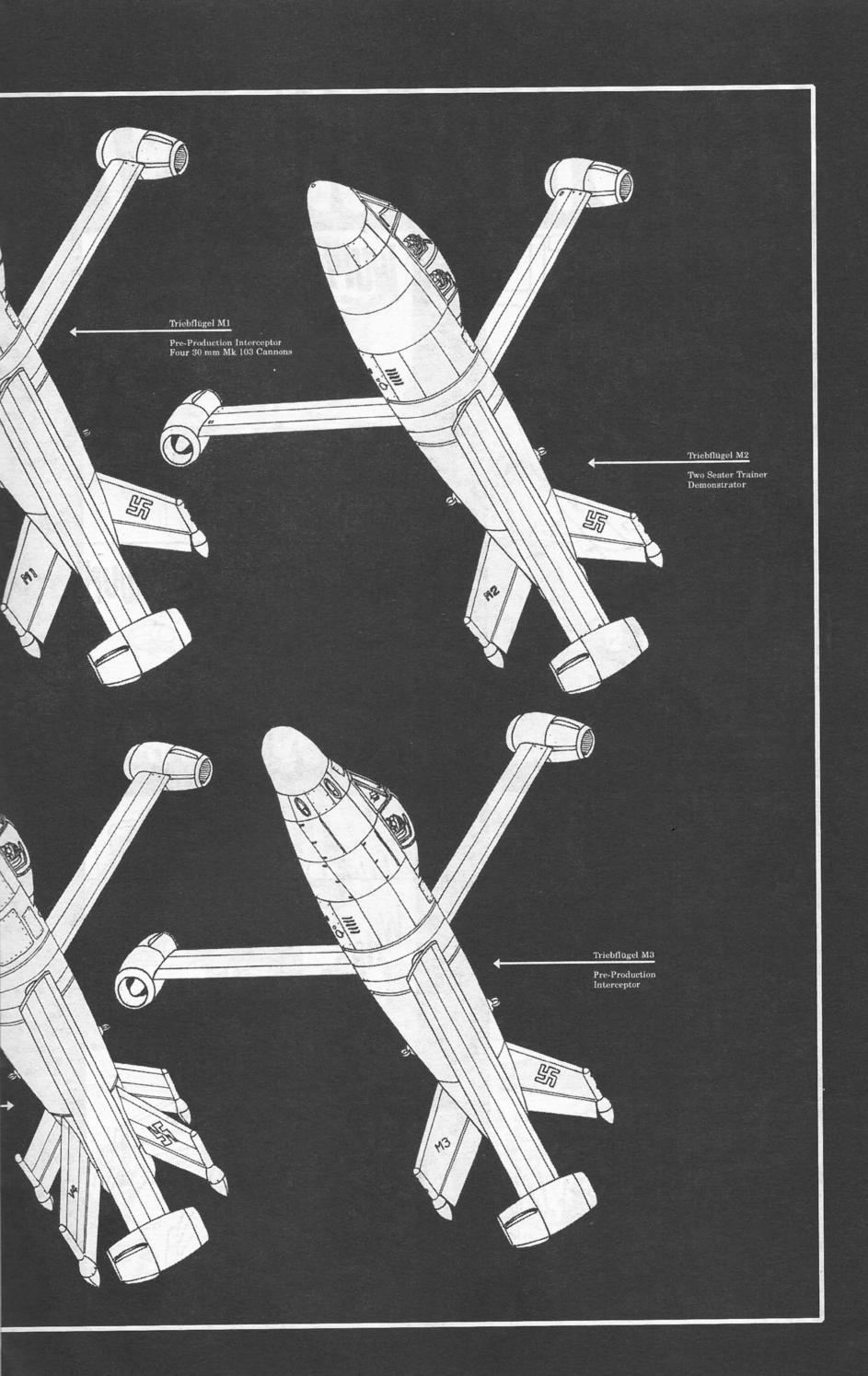 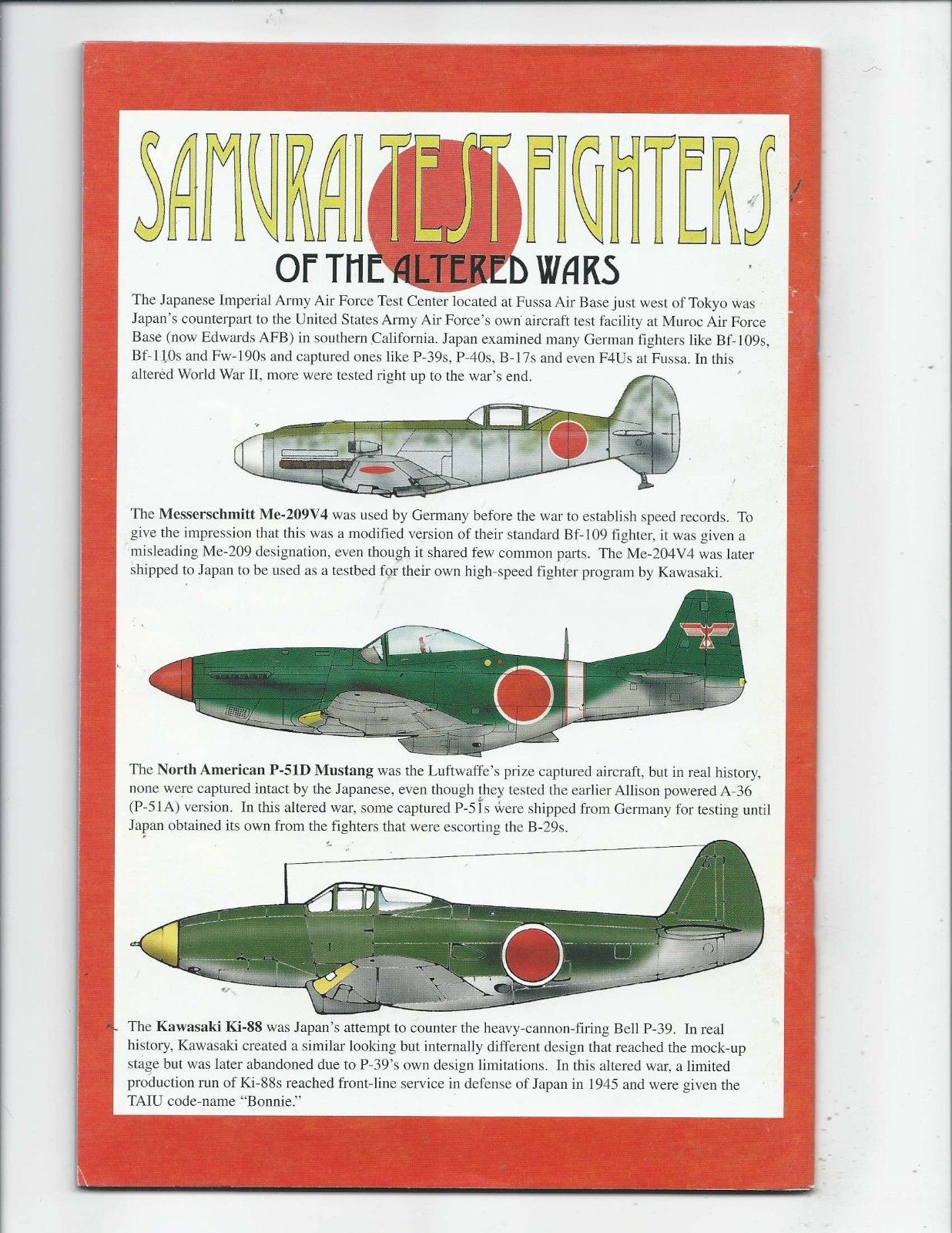 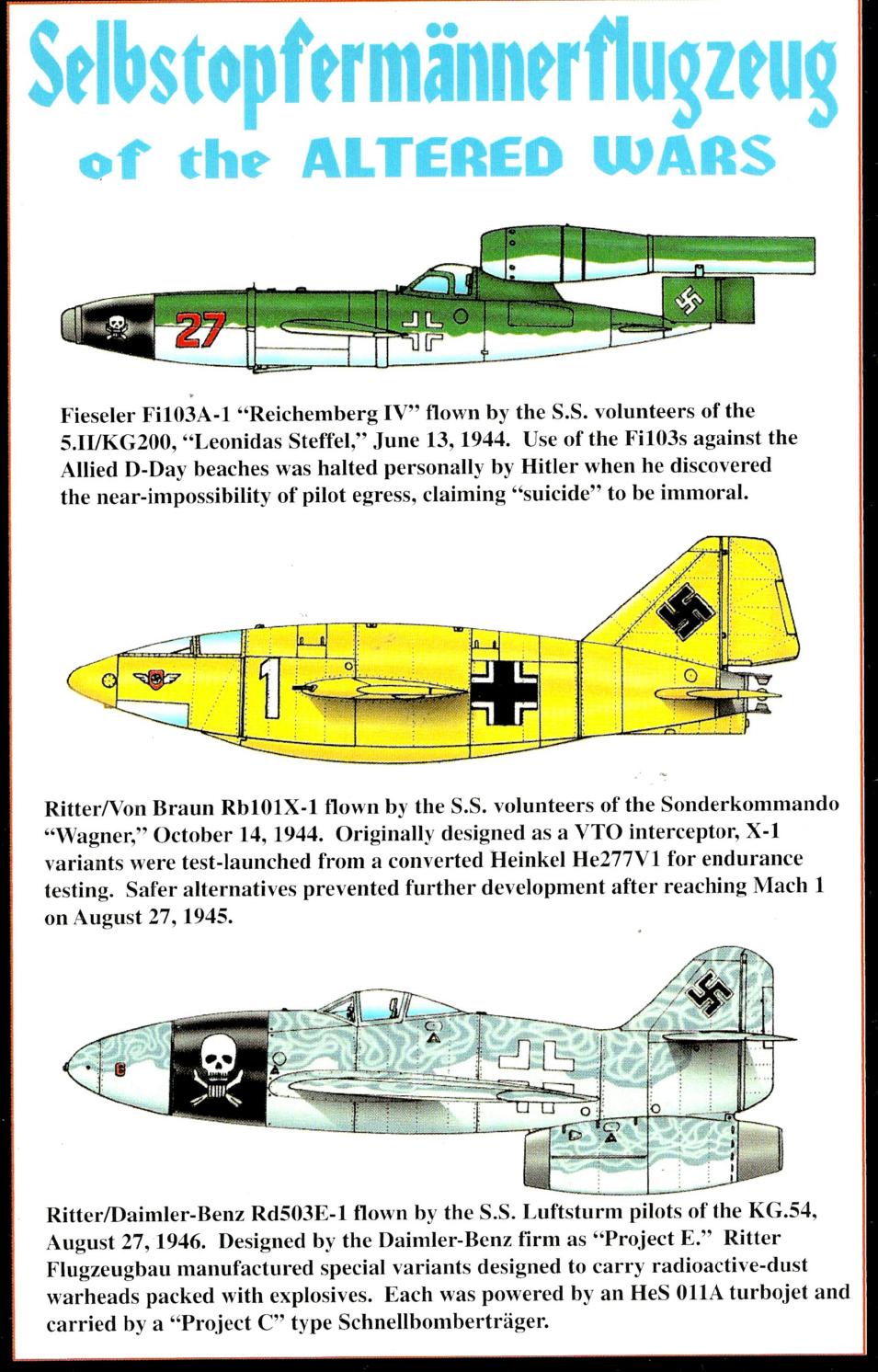 Another update from "Boldly Going", looking at the current status of active space stations at the end of 1989, plus a peek into the exciting future of the 1990s. 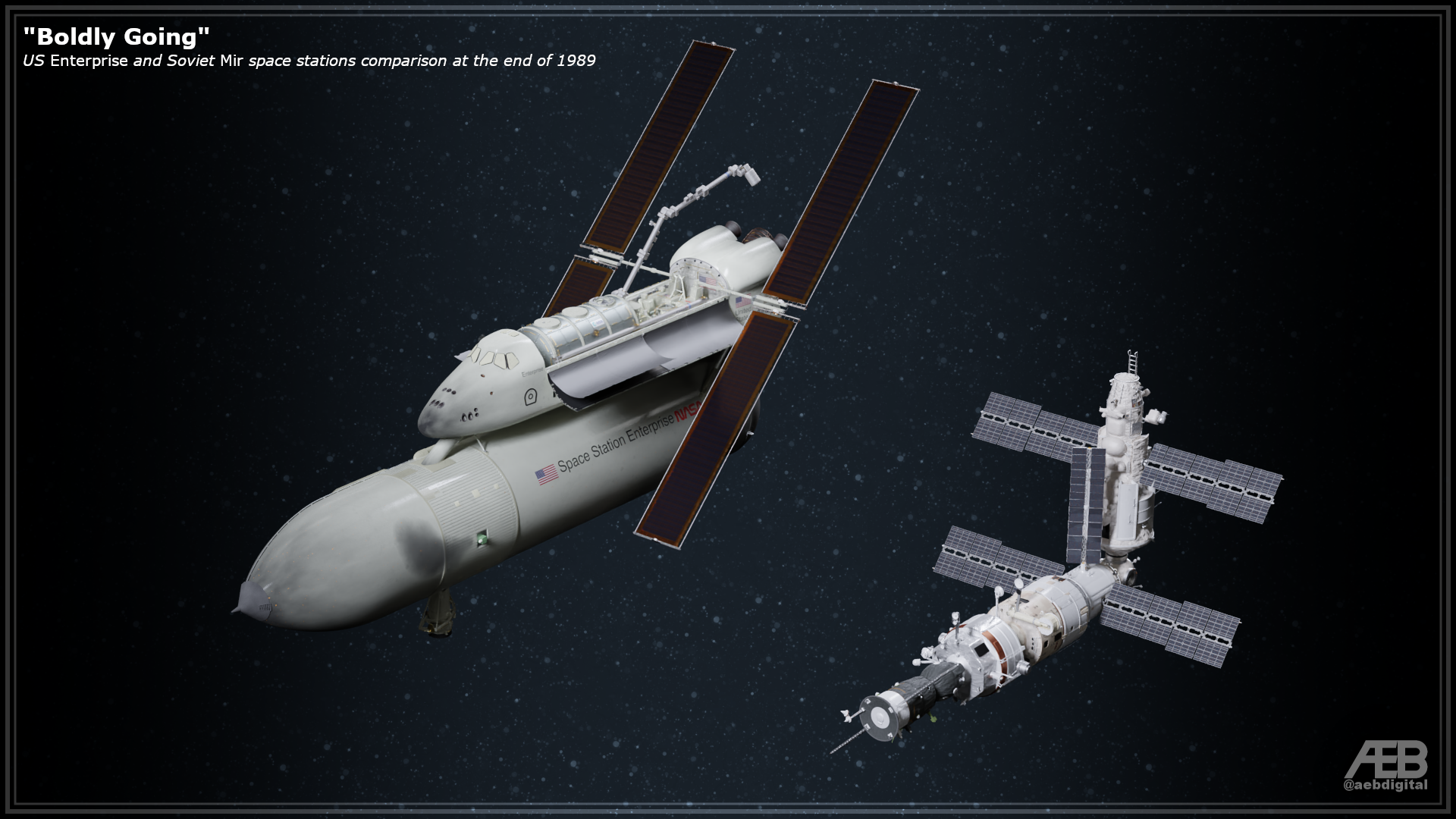 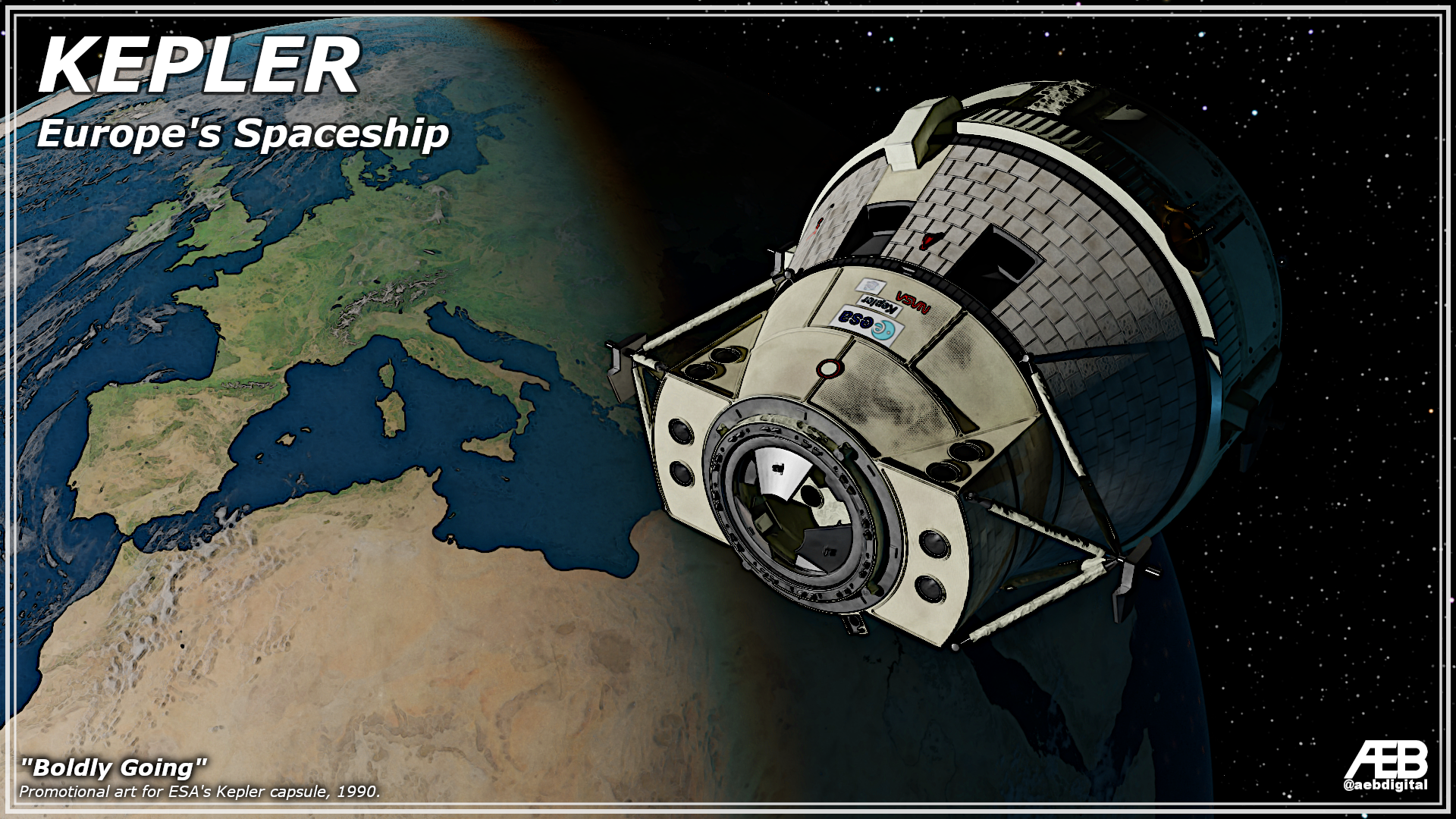