wingman said:
I thought this might be a good idea. all Air and Space and related pictures are welcome.

here is one to start this off.

from the Recently concluded Action to stop the "Mad Russian" The Renegade General Nikolay Nedelin Putin, and forces loyal to him after is ill fated attempt to start WWIII and in his own words "restore the USSR to her former glory!"

Wow i cant believe it ben this long. i dedicate this post to the memory of just Just Leo, the first poster comment in this thread after me. I remember haveing so much fun reading his posts here, and seeing his creations. (Dec 24, 2017, his last post in this thread.) I really have missed the back and forth and him as well. Farewell my friend.

wingman said:
Wow i cant believe it ben this long. i dedicate this post to the memory of just Just Leo, the first poster comment in this thread after me. I remember haveing so much fun reading his posts here, and seeing his creations. (Dec 24, 2017, his last post in this thread.) I really have missed the back and forth and him as well. Farewell my friend.
Click to expand...

I miss Leo and his designs as well. 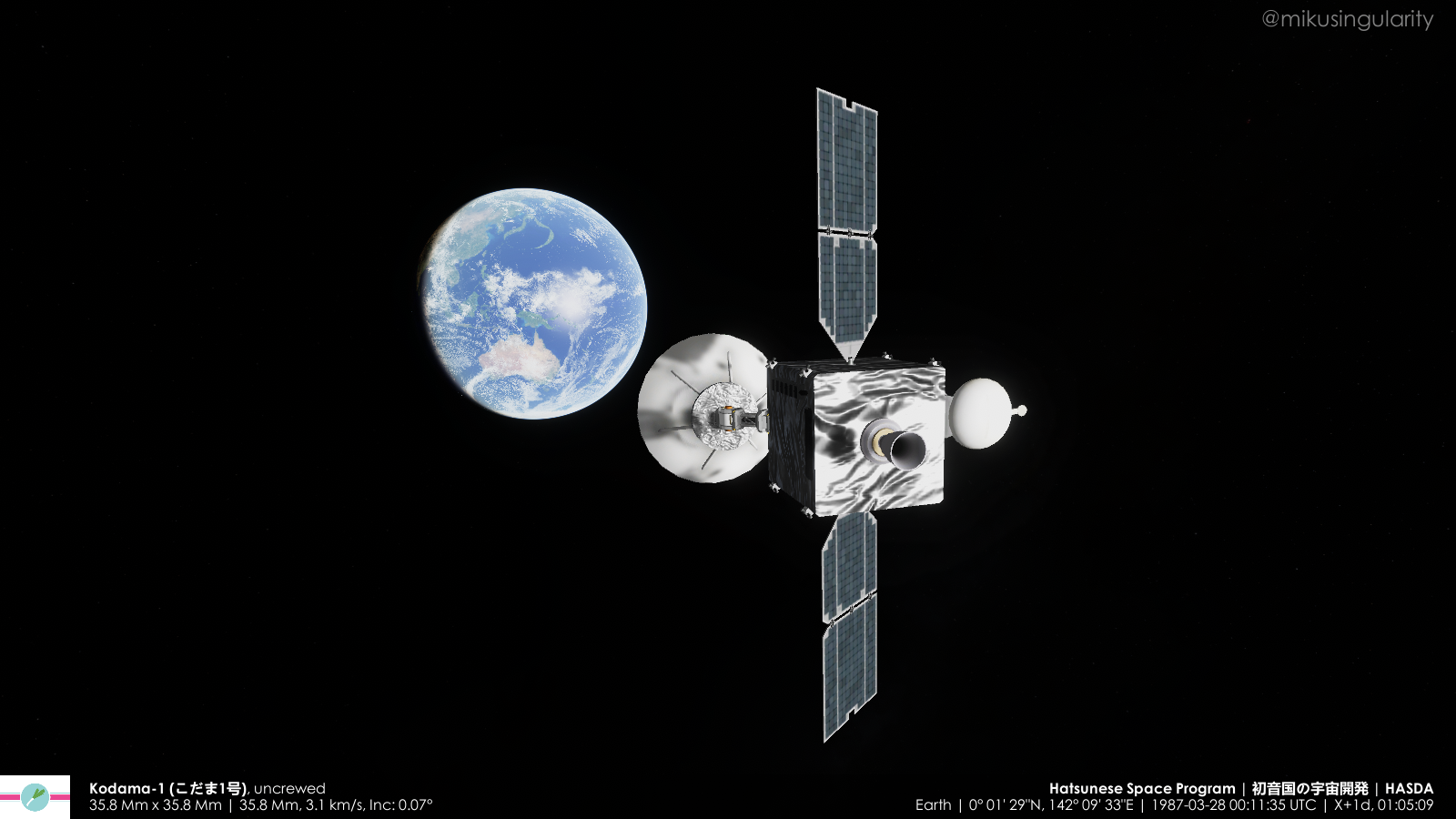 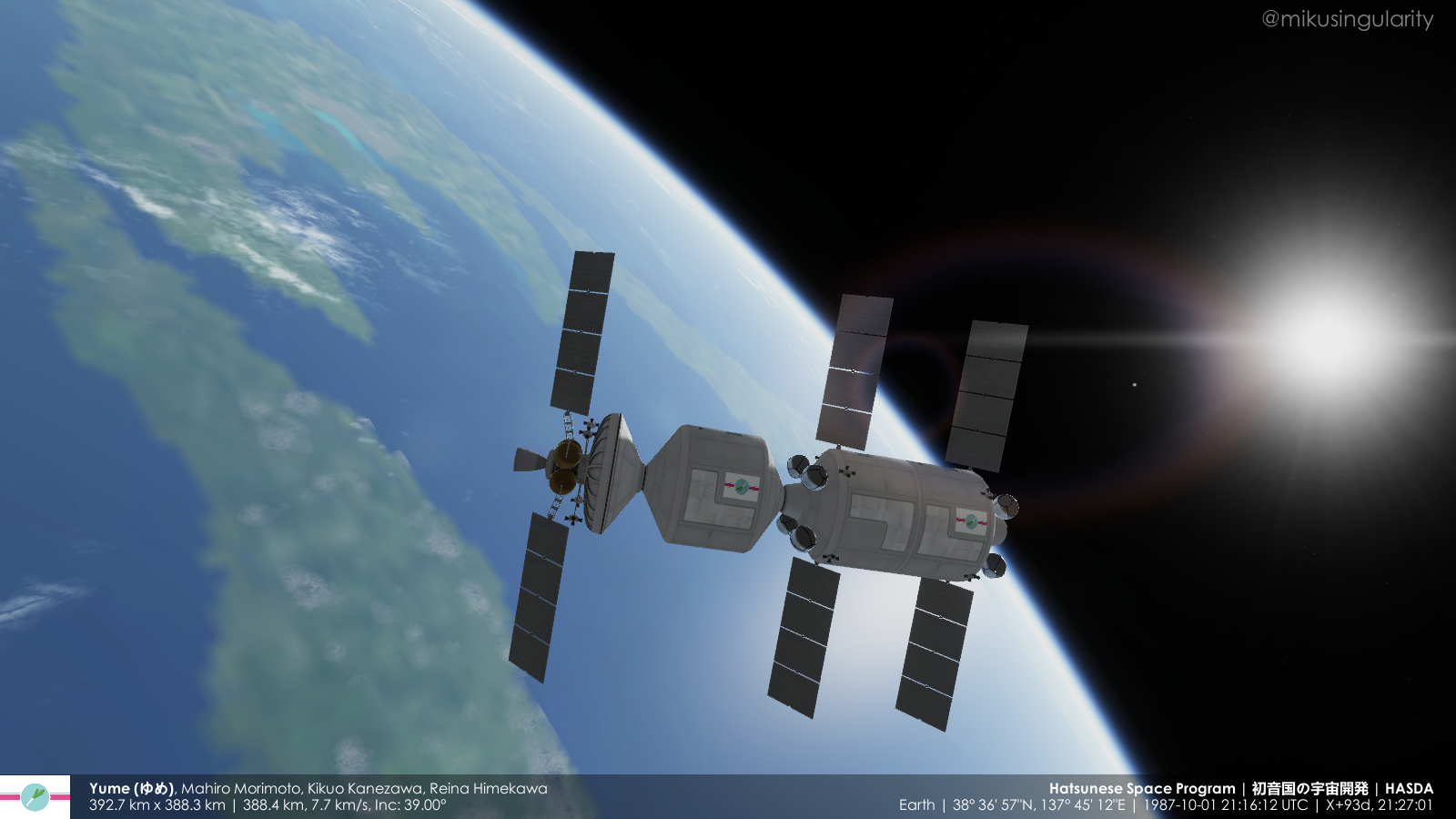 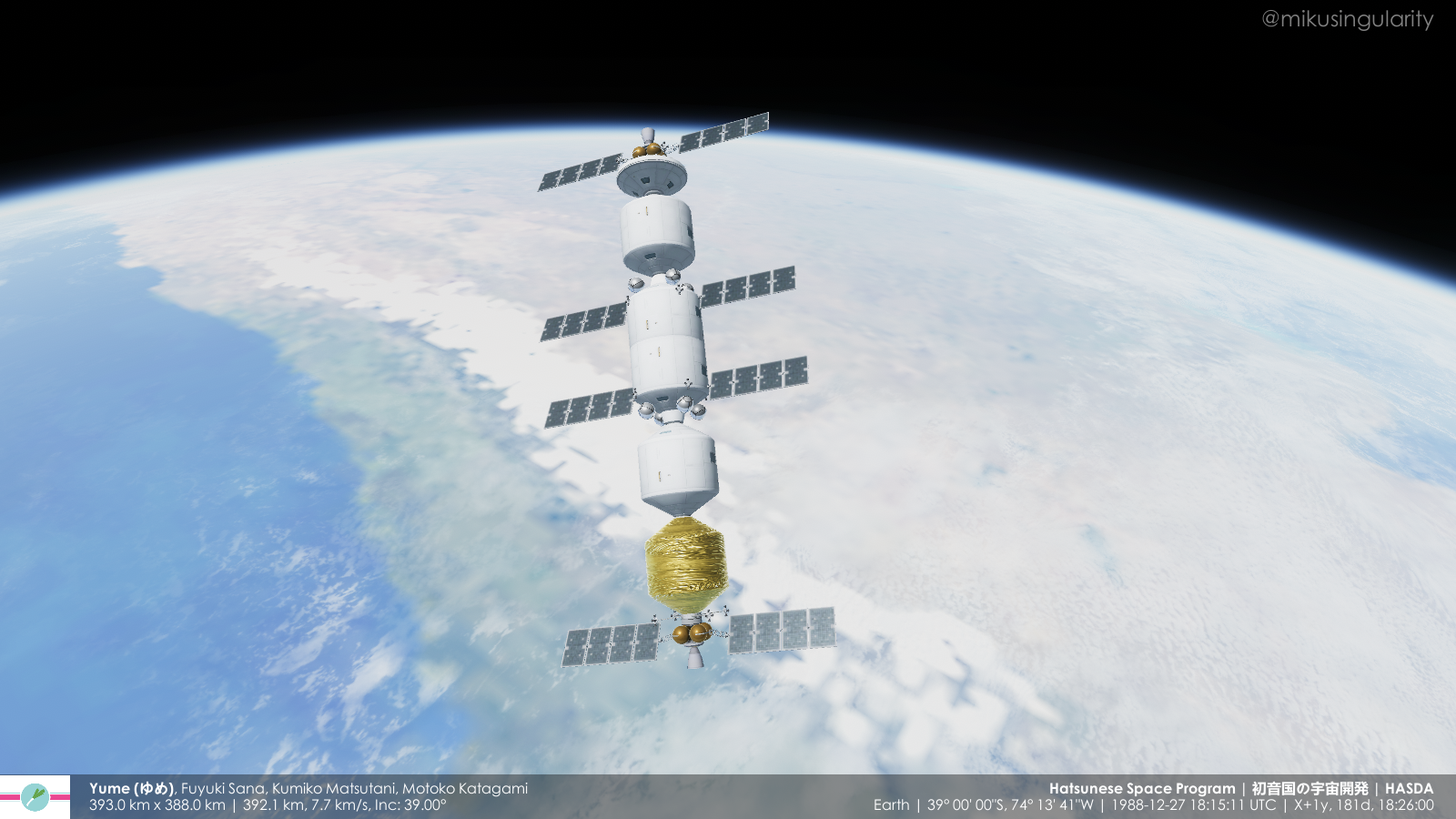 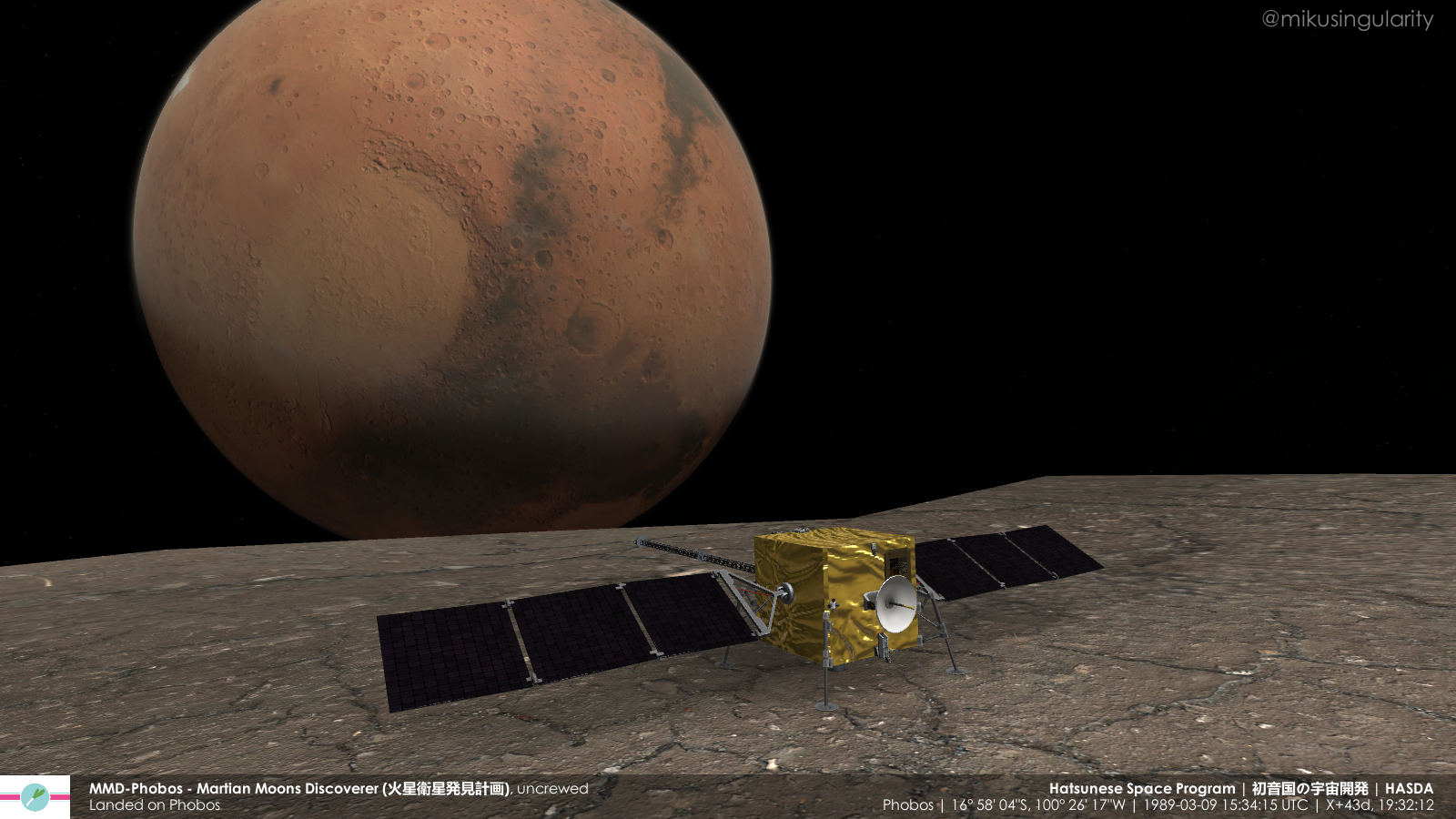 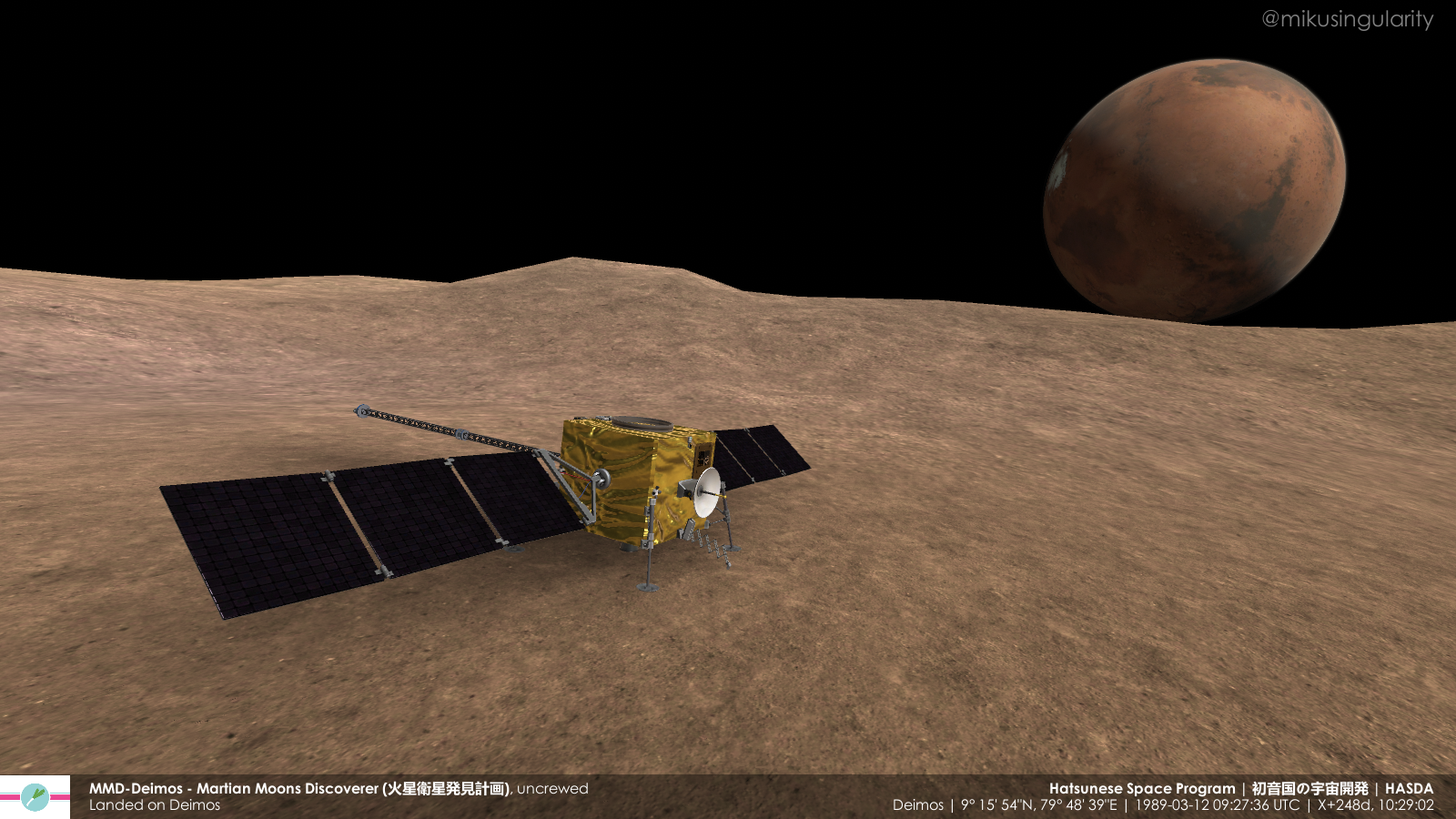 An N-11 rocket launches a crewed 7K-L1 Zond spacecraft on a mission around the Moon. IOTL, L1 Zond missions were launched via Proton.
N-11 is based upon the larger N-1 moon rocket. The first two stages are modifications of the N-1 Blok-B and V, with a Blok-Sm hydrolox 3rd stage.
Full res version of this image can be found here. 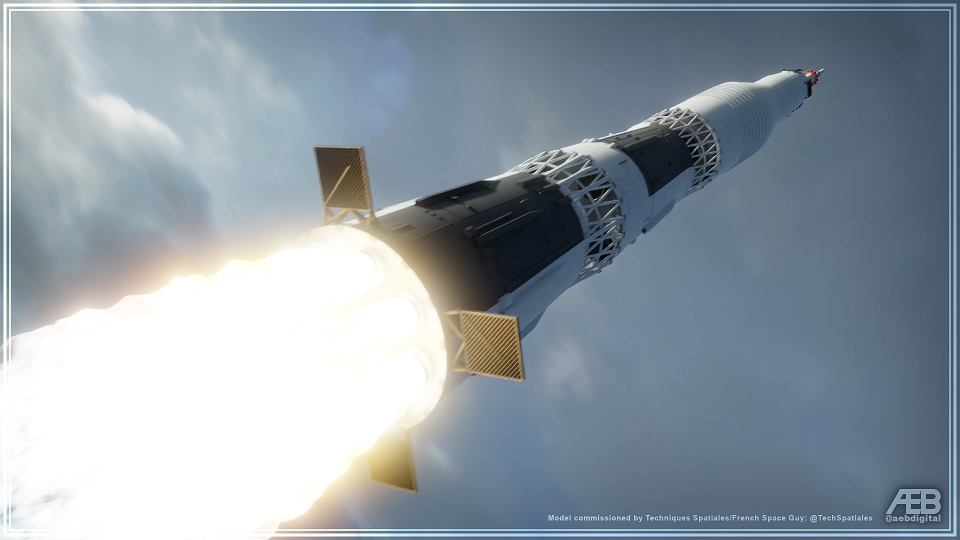 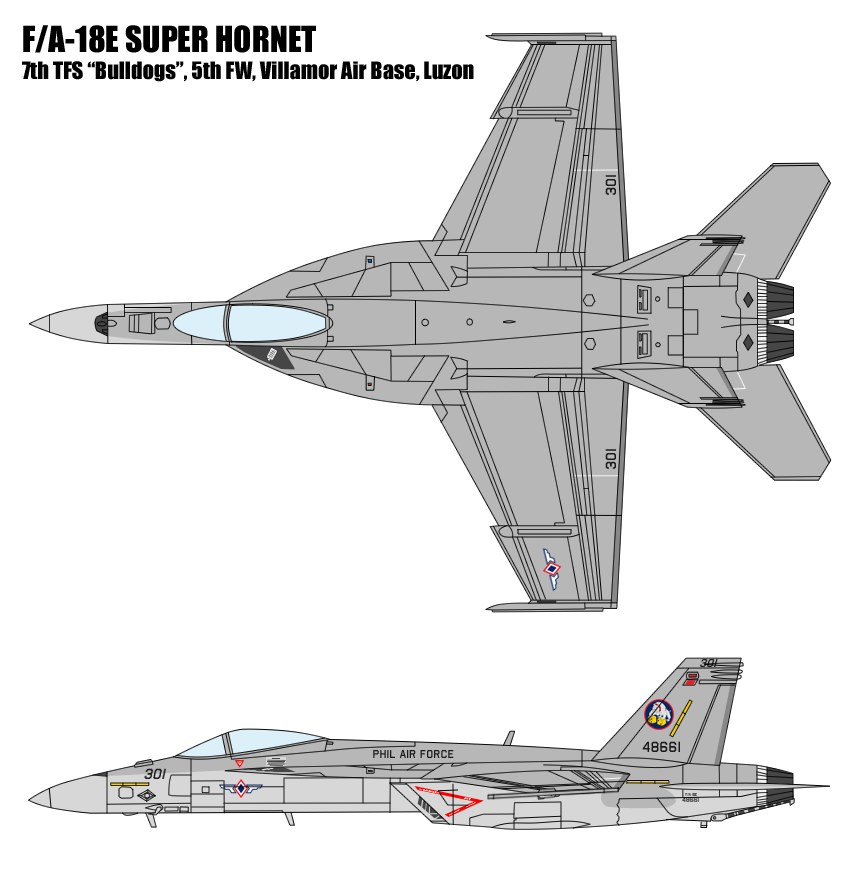 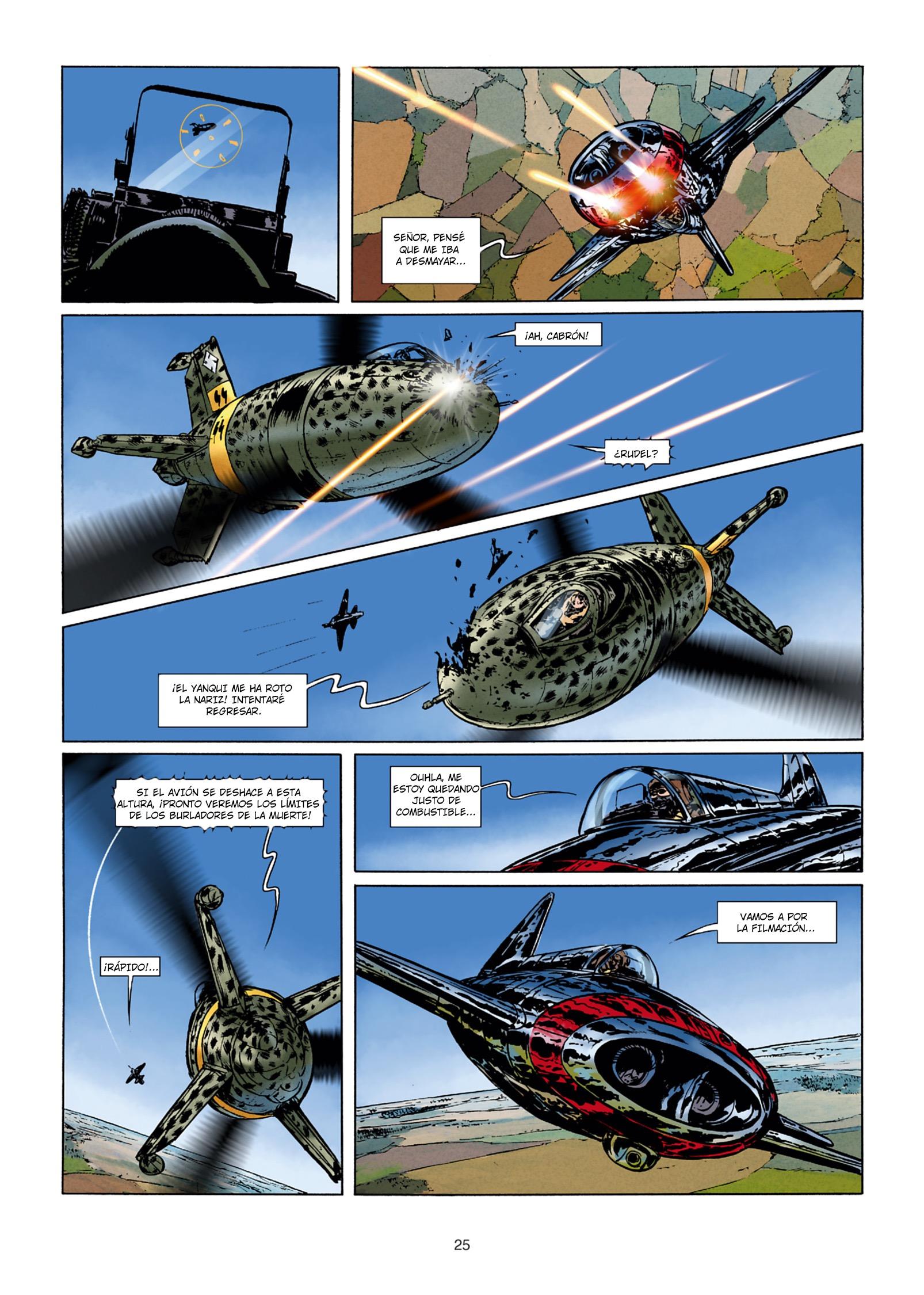 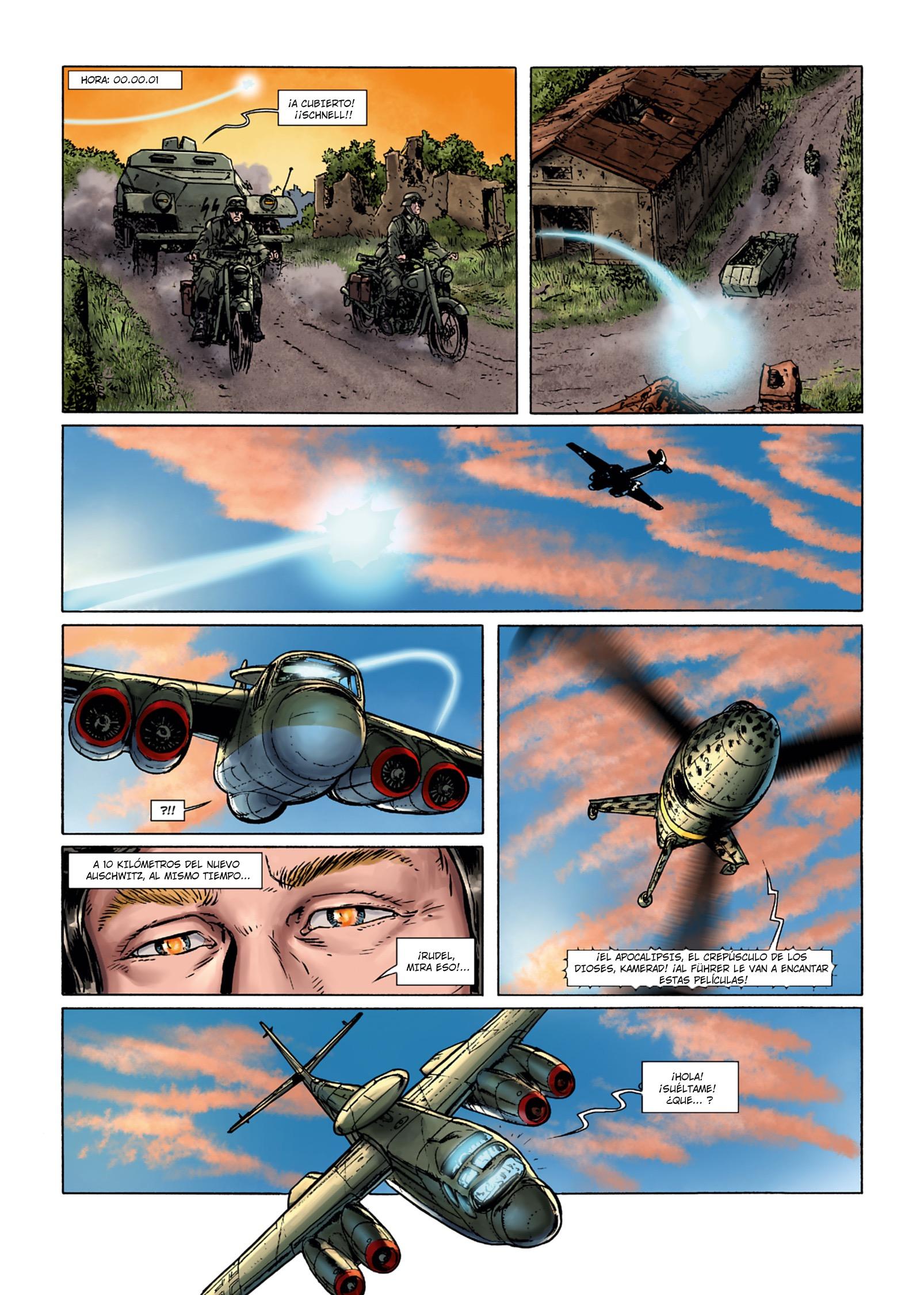 North American Aviation (NAA) developed several single-feater fighters from its family of two-seat trainers evolved from the NA-16 prototype. Intended for cash-strapped countries that urgently needed a simple aircraft with modern capabilities and features, NAA built several fighters based on the NA-16 for customers between 1939 and early 1942. 7 NA-50 fighters were delivered to Peru in 1939 with 26 similar NA-51s built for China in 1940. In 1941, Siam (Thailand) ordered 6 NA-68 fighters and 12 NA-69 armed two-seat trainers, but the US government prevented their export due to Siam’s growing closeness with Japan. Impressed into USAAC service as unarmed advanced trainers in the immediate aftermath of the Japanese attack on Pearl Harbour, the NA-68s were designated P-64.

After the delivery of 36 NA-33 armed trainers to the Netherlands East Indies (NEI), a follow-on order was placed for 72 NA-70 fighters. Structurally based on the NA-33, the NA-70 was powered by the 1,200hp R-1830 S3C4G Twin Wasp radial engine and armed with 2 20mm Hispano cannon and 4 .303in Browning machine guns. 24 had been delivered by the time Japan invaded the NEI, prompting the US government to cancel the delivery of the remainder in order to prevent them from falling into Japanese hands.

Transferred to USAAC control and designated P-64A, 48 NA-70s were made available on Lend-Lease terms to the Free French for the defence of New Caledonia. As the FAFL only had a small presence on New Calendonia, and this was focused on a handful of transport aircraft, the service had to rush personnel to the island to stand-up a new fighter squadron to operate the P-64As. The first 12, crated airframes arrived at the island on 28 December 1942, having been diverted en route to the NEI, but the first French crews needed to assemble and fly the planes didn’t arrive until late February, having had a brief introduction to type at NAA’s Inglewood plant before departure. The Groupe de Chase New Caledonia was declared combat-ready in early April.

Japan intended to occupy New Calendonia in July or August 1942 as part of Operation FS, but this was cancelled after their loss at the Battle of Midway in June. Instead, the island became a major hub of Allied activities in the South-West Pacific Theatre, acting as a logistical centre in support of the invasion of Guadalcanal and serving as a forward maintenance and repair port for the US Navy. Despite November 1942 reports from Paris of a Japanese bombing raid on New Caledonia, the island never came under Japanese attack. With the P-64As incapable of responding to the occasional Ki-64 overflight, their combat duties centred around maintaining air defence alerts, convoy escort and maritime armed reconnaissance sweeps in search of enemy targets. In these roles, their biggest threat came from Allied fratricide, American airmen and US Navy gunners frequently opening fire on them. In February the FAFL replaced the P-64A's NEI-standard neutral grey, dark green and dark brown camouflage with a scheme based on the new US Navy tri-color standard of Ensign White, Intermediate Blue and Sea Blue. An American recommendation to add white bars to either side of the French roundels was rejected as “a step too far” by the FAFL’s local commanders.

As the Japenese threat to the island and its surround ocean receded, the taskings for P-64A crews diminished, along with morale and aircraft serviceability. In light of this, the P-64As were retired in September 1944 and the Groupe de Chase New Caledonia disbanded, having never fired a shot at a Japanese target.

Is here anyone an aircraft expert ? I wanted to design my own airplanes and helicopters for my TL but... I lack the most essential need for that : actually knowing what an airplane or helicopter need and makes it special or not.

Because I can barely distinguish between "looks American/NATO" or "looks Russian". Possibly visualizations?

JAXA+ : What if Japan had an unlimited space budget?

The H-Z rocket is capable of lifting 485 tonnes of payload into low Earth orbit from Tanegashima Space Center. 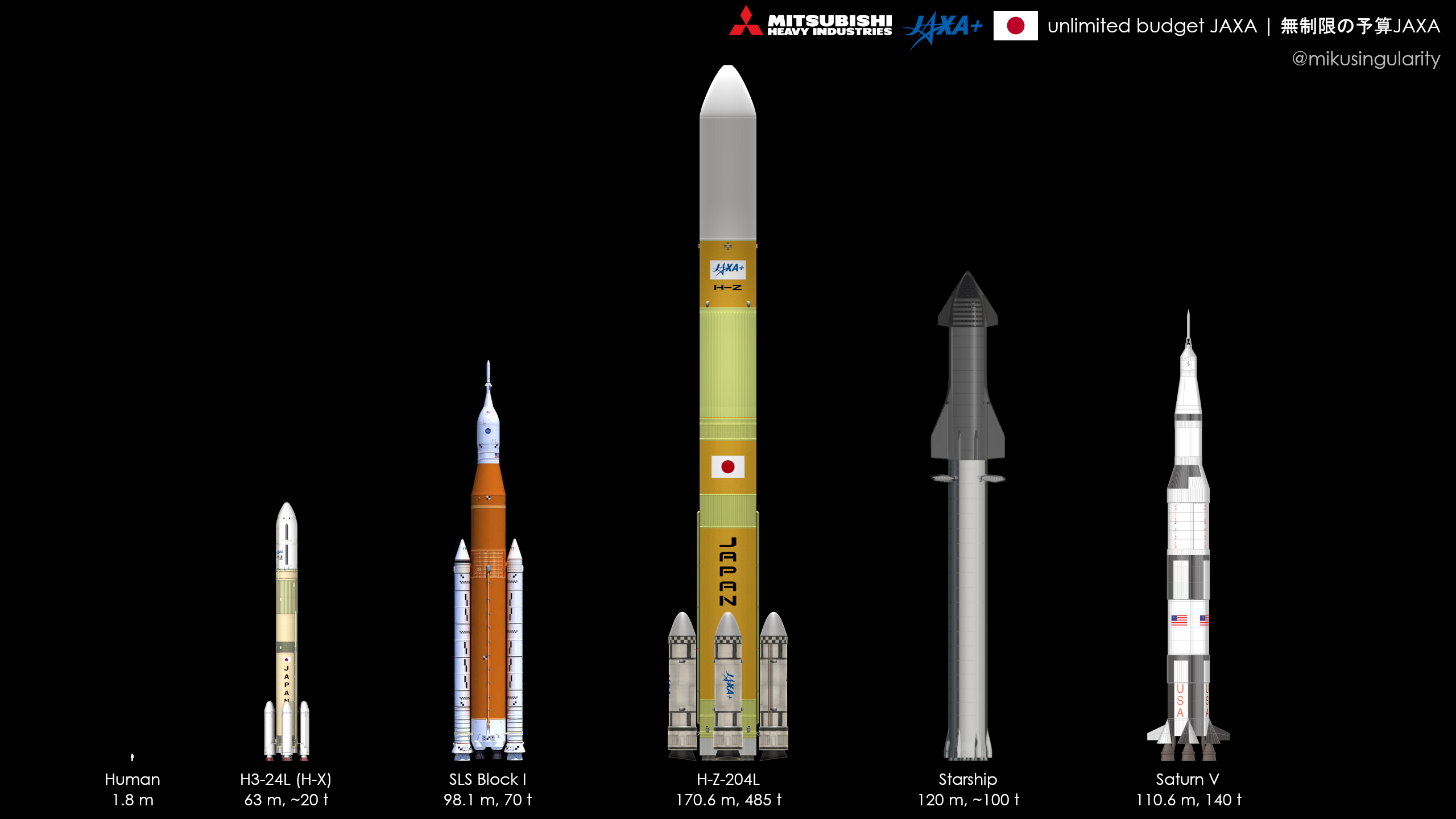 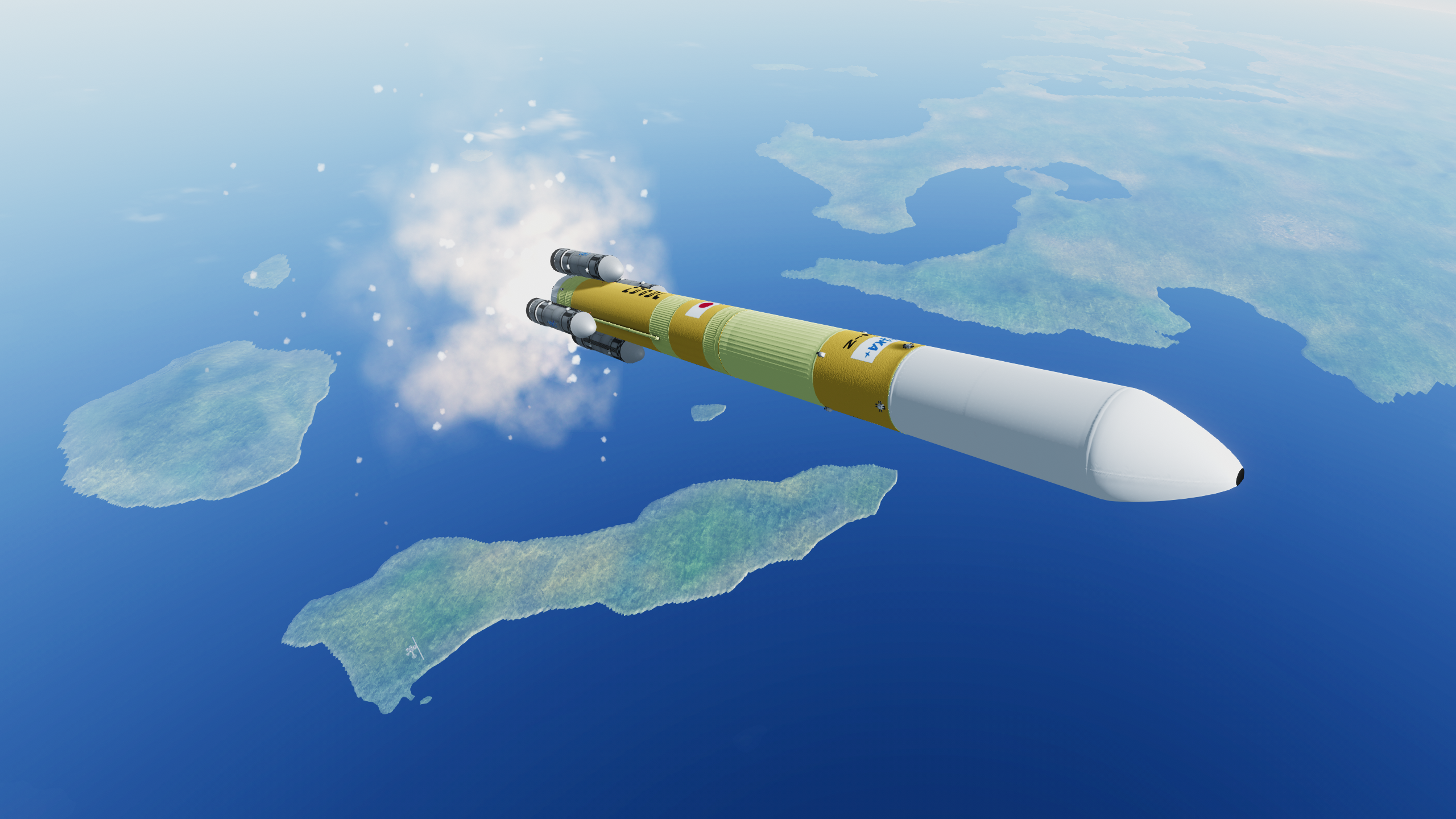 Pipcard said:
JAXA+ : What if Japan had an unlimited space budget?

The H-Z rocket is capable of lifting 485 tonnes of payload into low Earth orbit from Tanegashima Space Center.​
Click to expand...

Why is it so huge, though ?

Petike said:
Why is it so huge, though ?
Click to expand...

It was designed to launch components of moon bases and crewed interplanetary missions.

Images from the first post of my new timeline: A Sound of Thunder: The Rise of the Soviet Superbooster 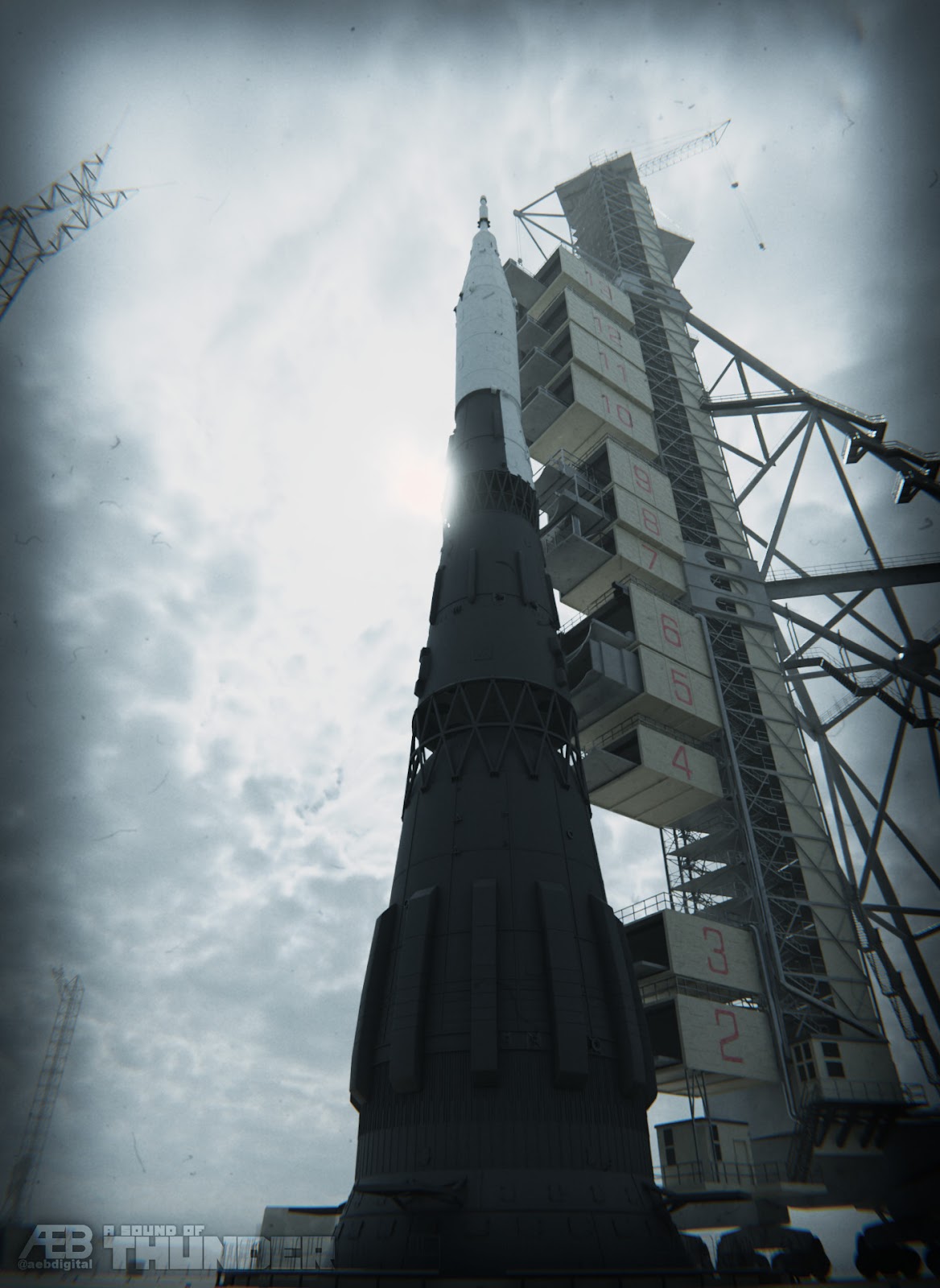 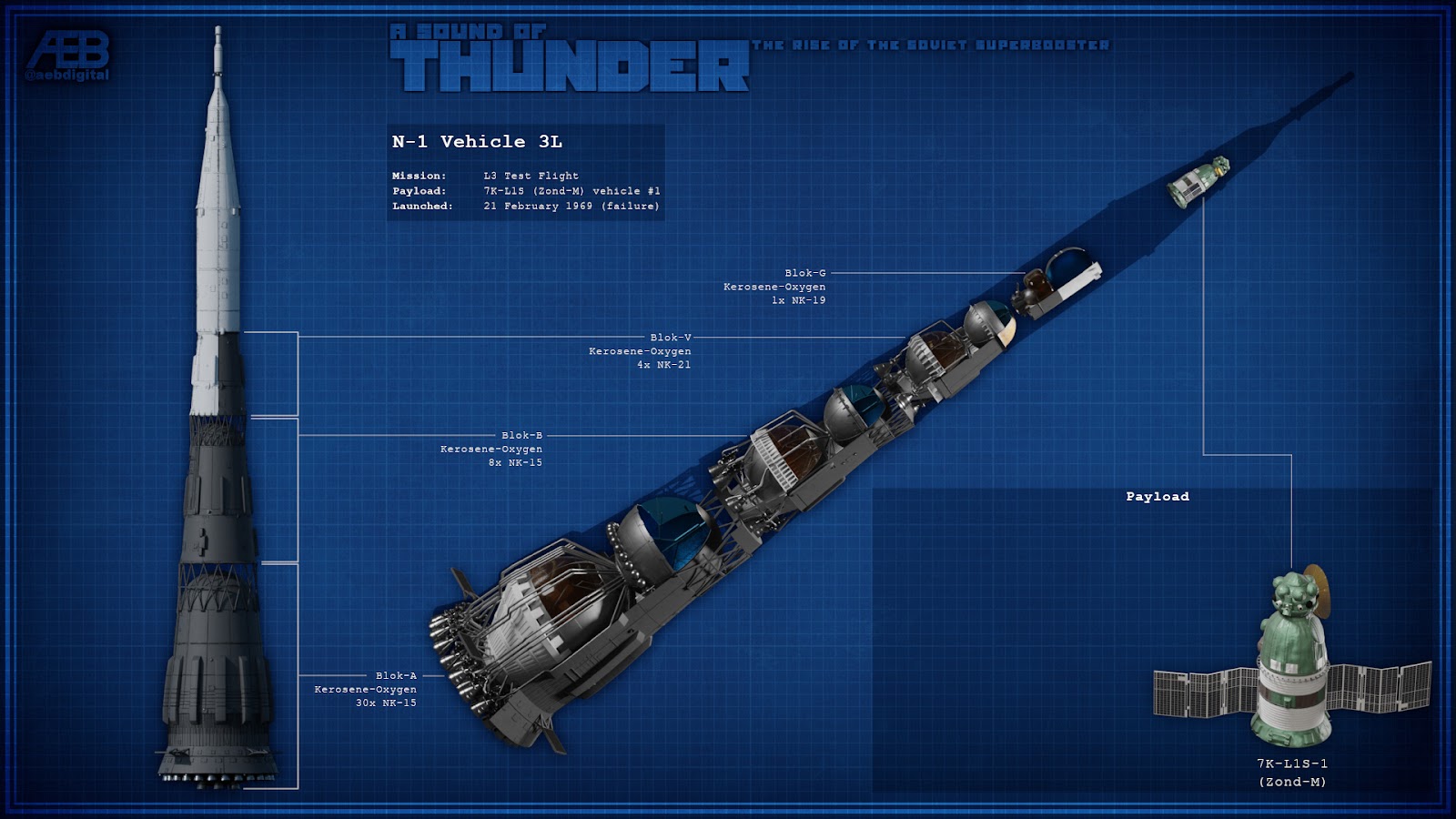 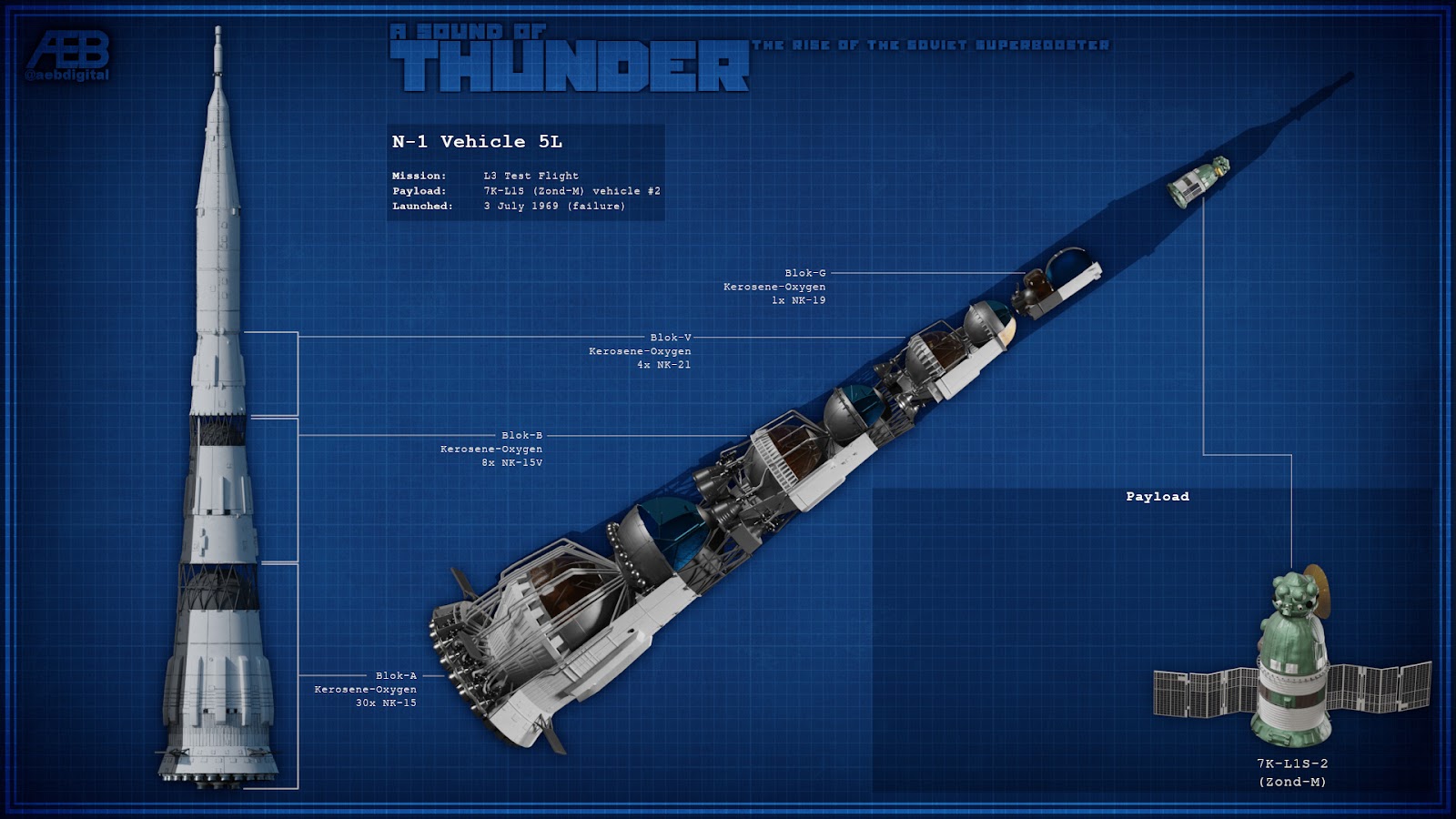 TimothyC said:
The economic impacts of the Japanese bubble in the 1980s have taken decades to shake out IOTL, and would generally do the same here. In short, even with an earlier station capability, we the authors have serious doubts that NASDA/JAXA will do anything substantively different than they did OTL.
Click to expand...

With an unlimited space budget, Japan launches the HZSS (H-Z Space Station), also known as Kibo-2. It is a wet workshop using the 13.9-meter-diameter H-Z first stage, with an initial on-orbit mass of 467 tonnes.
The orange foam insulation is coated with a white sealant to protect it from popping in the vacuum of space. The initial crew of three rides a crewed version of the HTV-X cargo spacecraft. 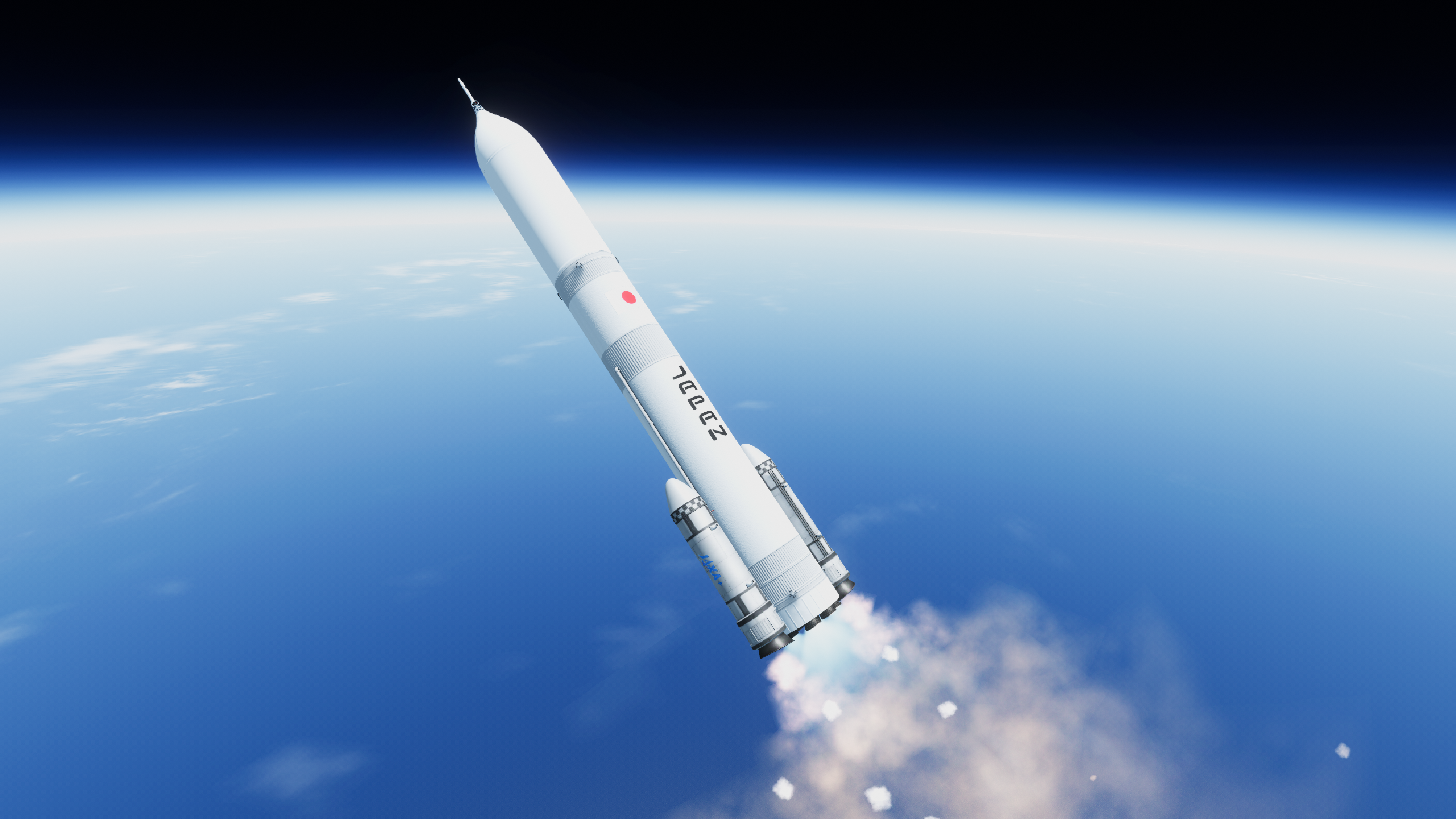 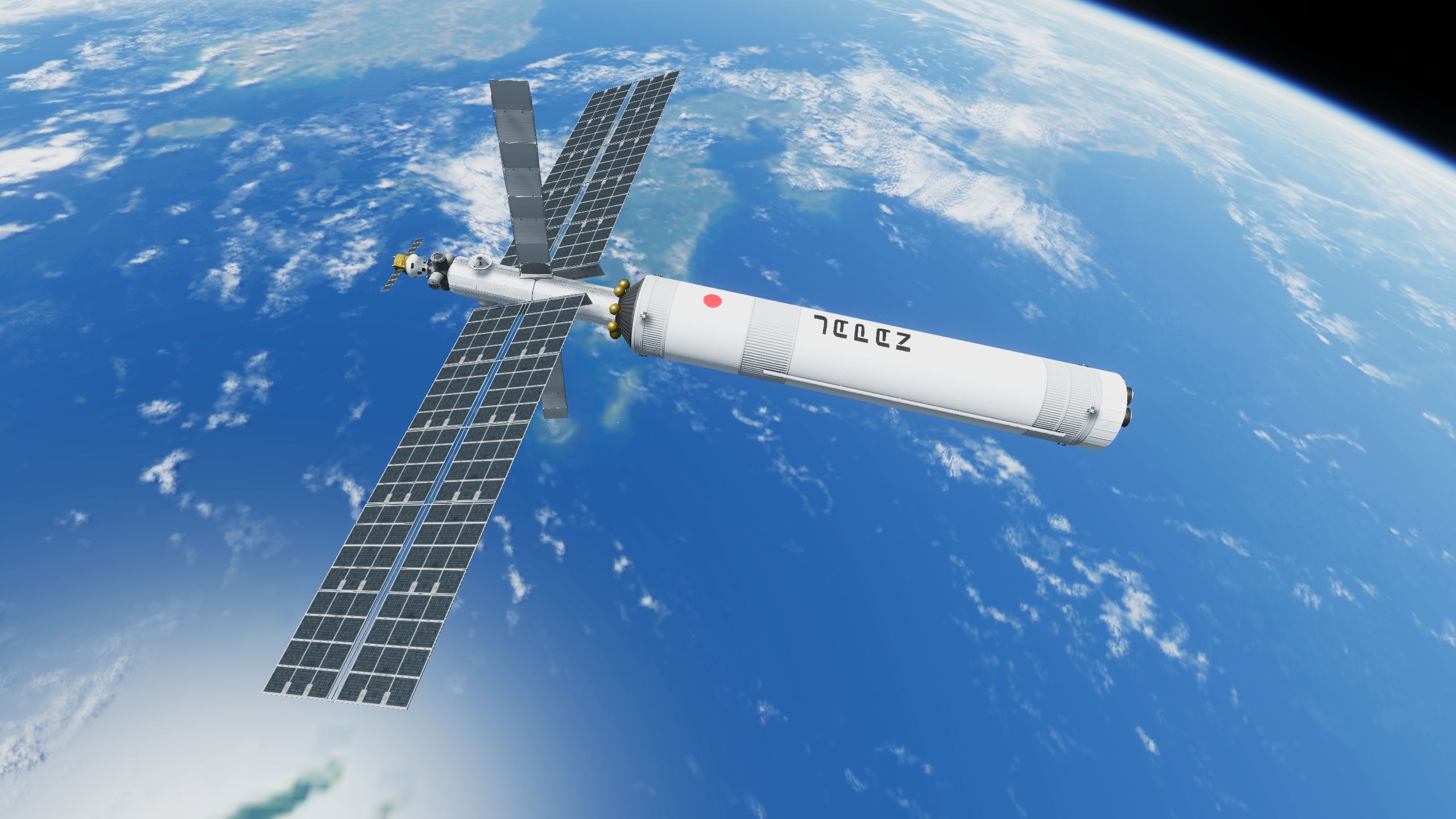 Japan's Tsukuyomi lunar lander weighs 175 tonnes and is 25 meters tall. It is a single-launch lunar base with a direct ascent return vehicle. 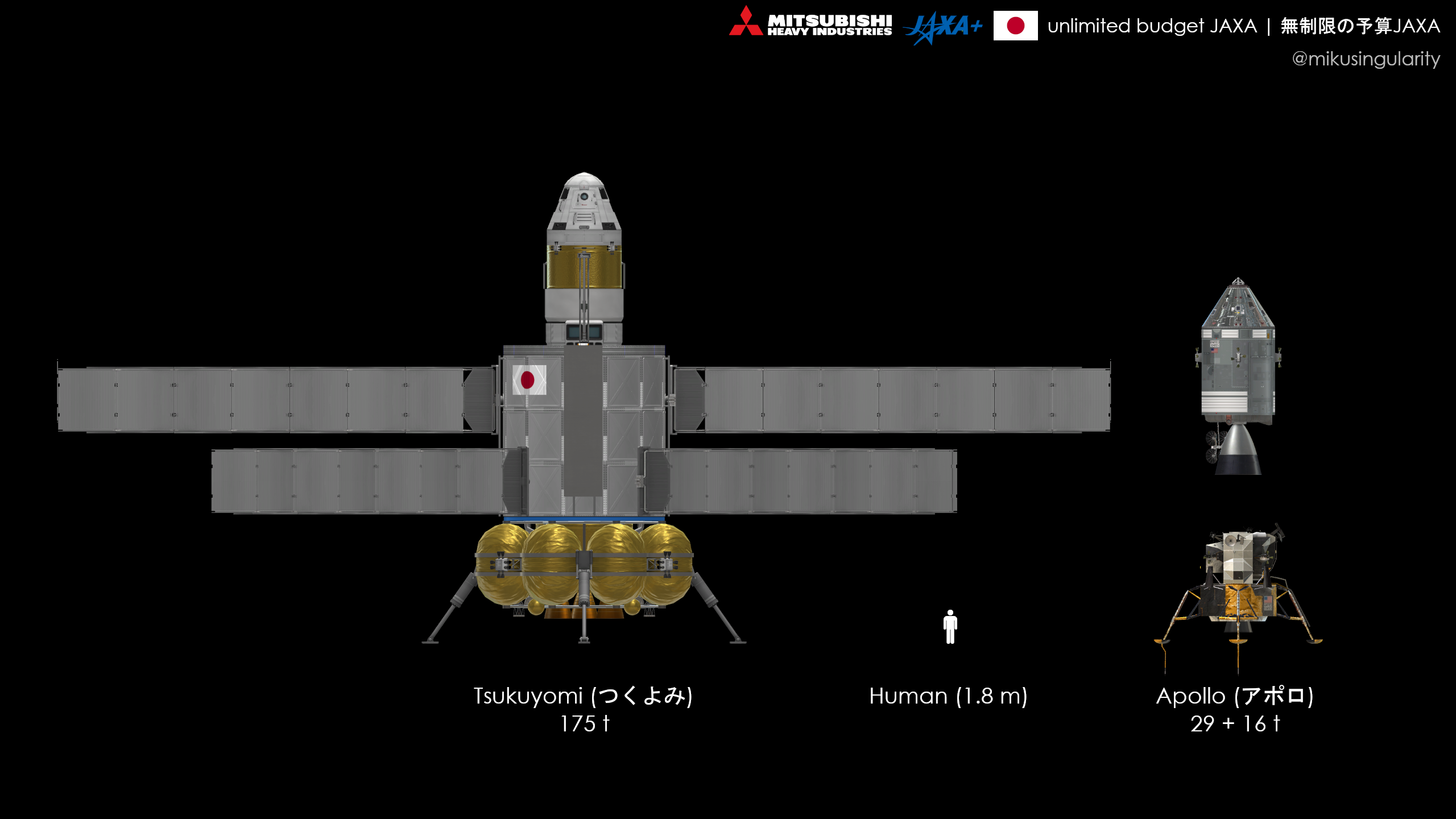 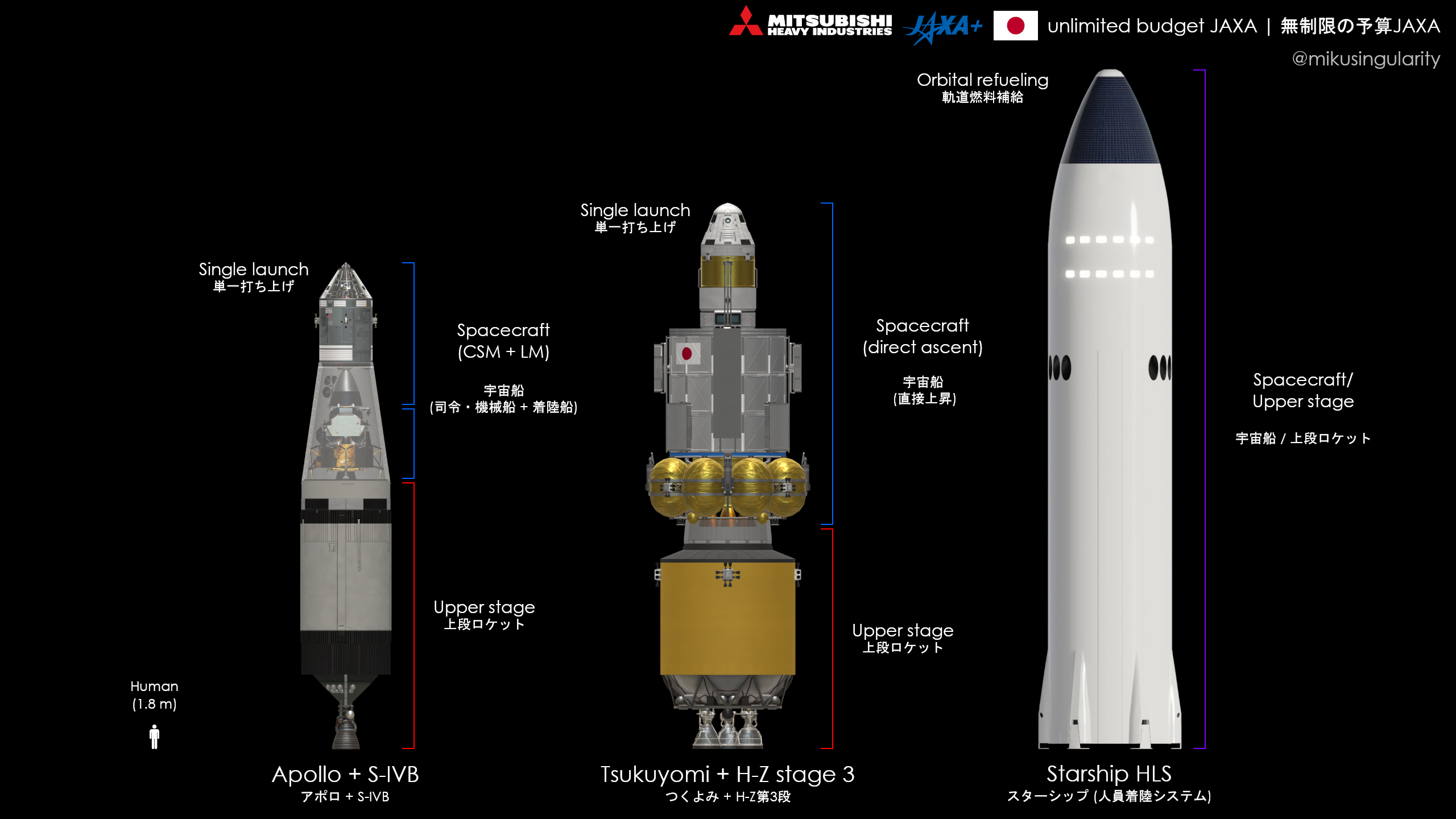 More mages from the first few posts of my timeline: A Sound of Thunder: The Rise of the Soviet Superbooster: 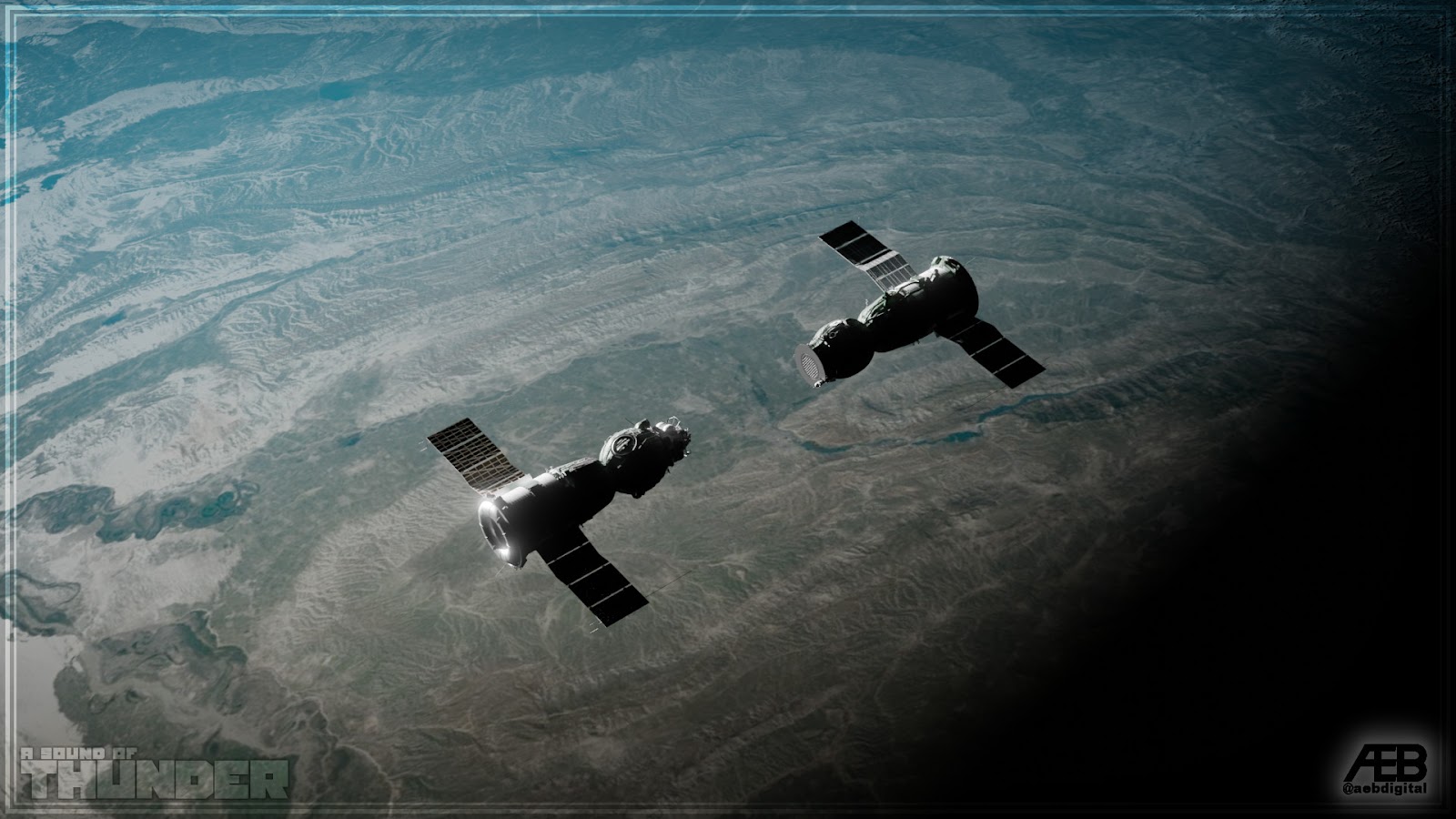 Inforgraphics for N1-6L and 7L launches. 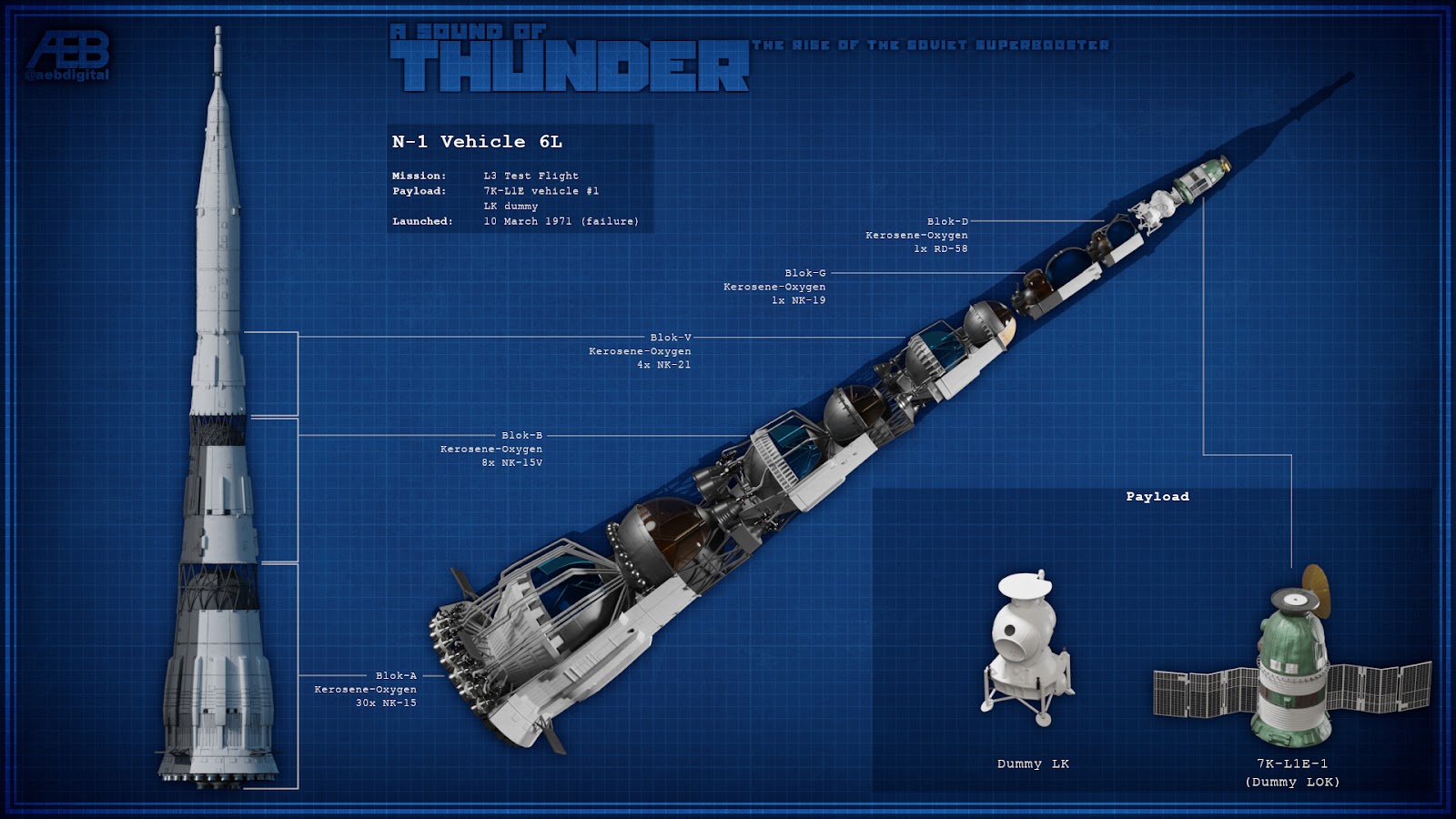 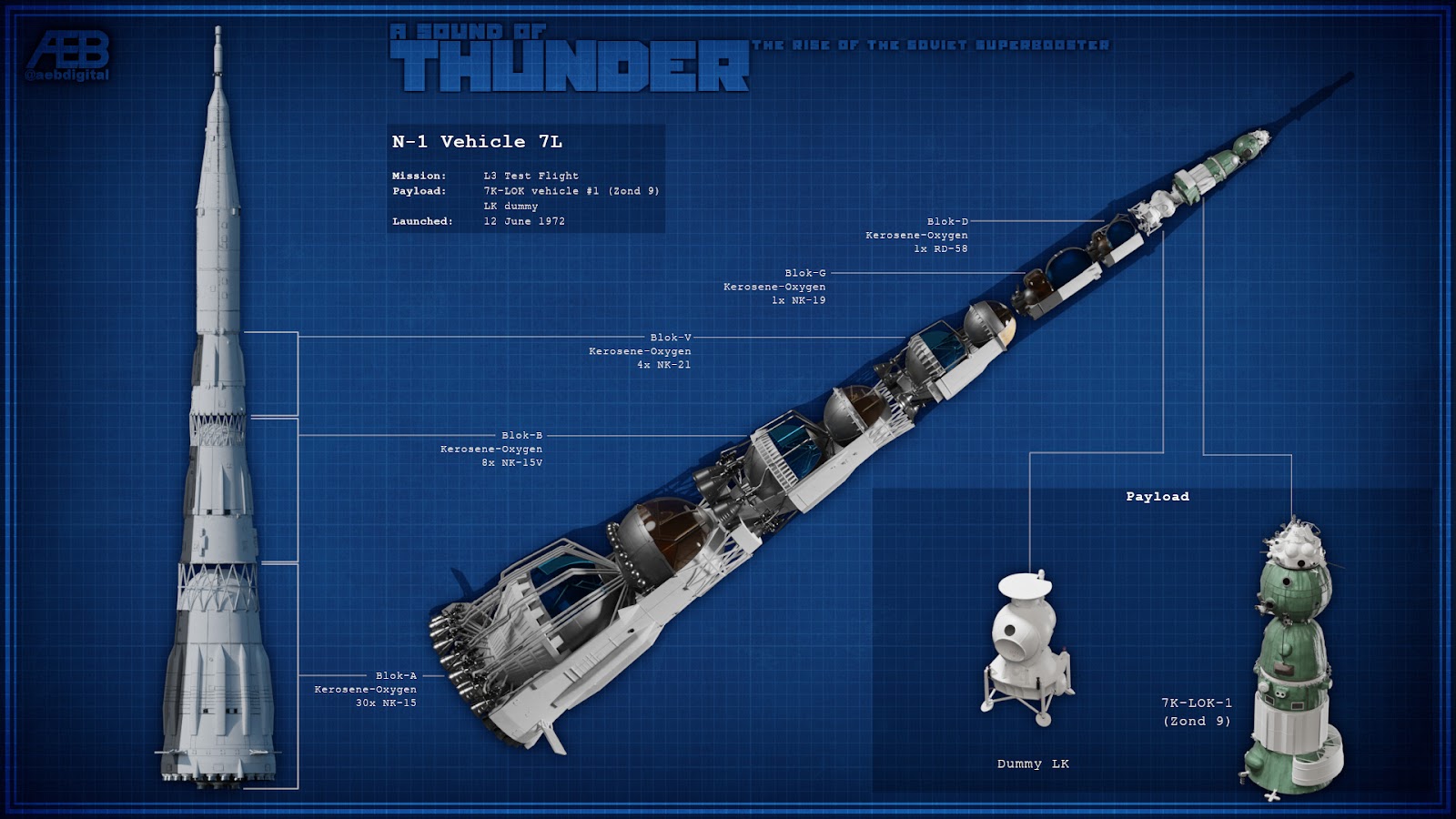 Soyuz 11 test flight of the 7K-OKS spacecraft in support of the Almaz space station programme, August 1972. 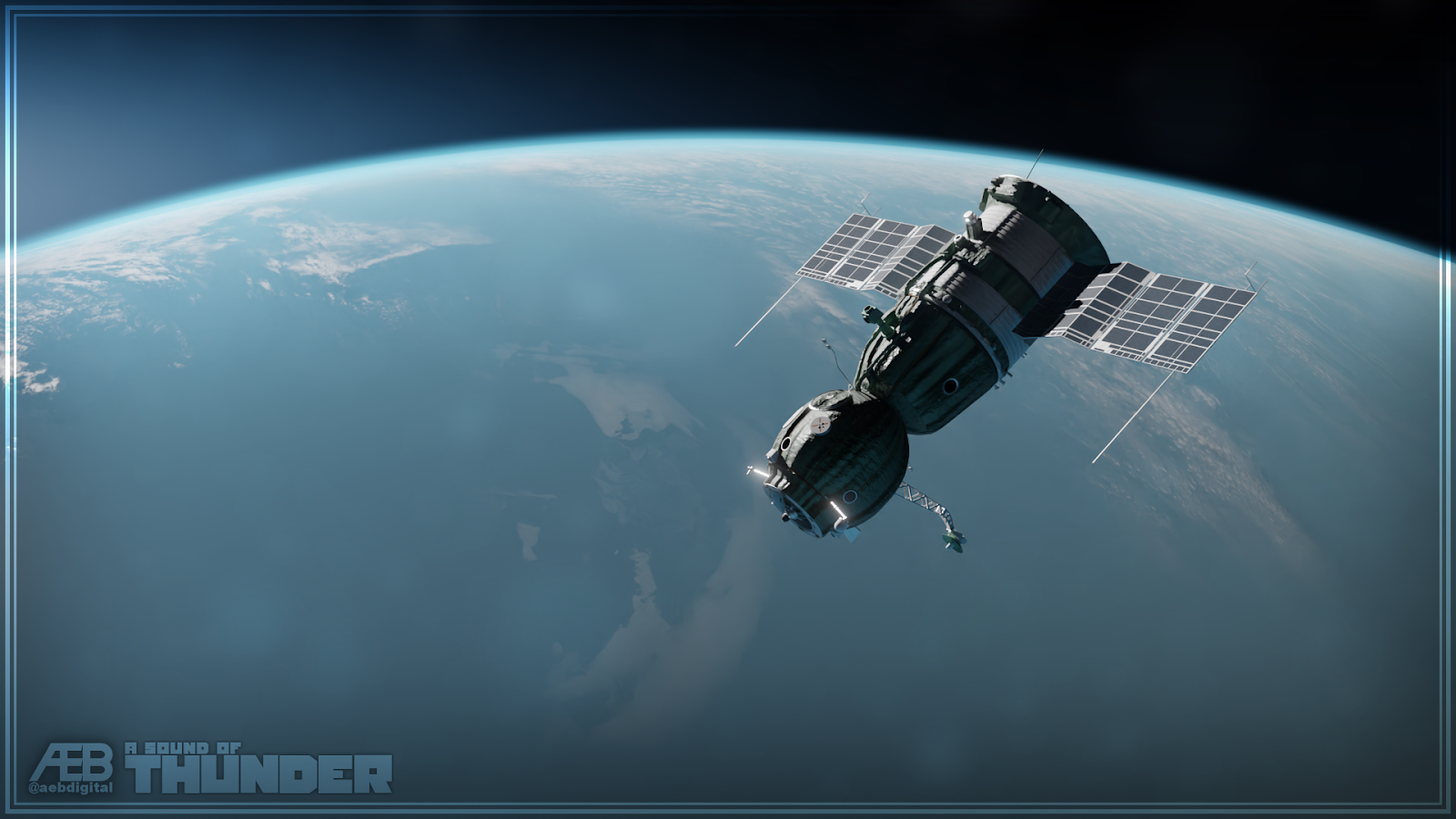 [JAXA+] 2026-03-09 - A "Tsukuyomi" lunar base lands near Shackleton Crater, launched in one go by a super-heavy H-Z rocket, which has a capacity of 485 tonnes to LEO. Astronauts Mutta Nanba, Hibito Nanba, and Takio Azuma are on board. 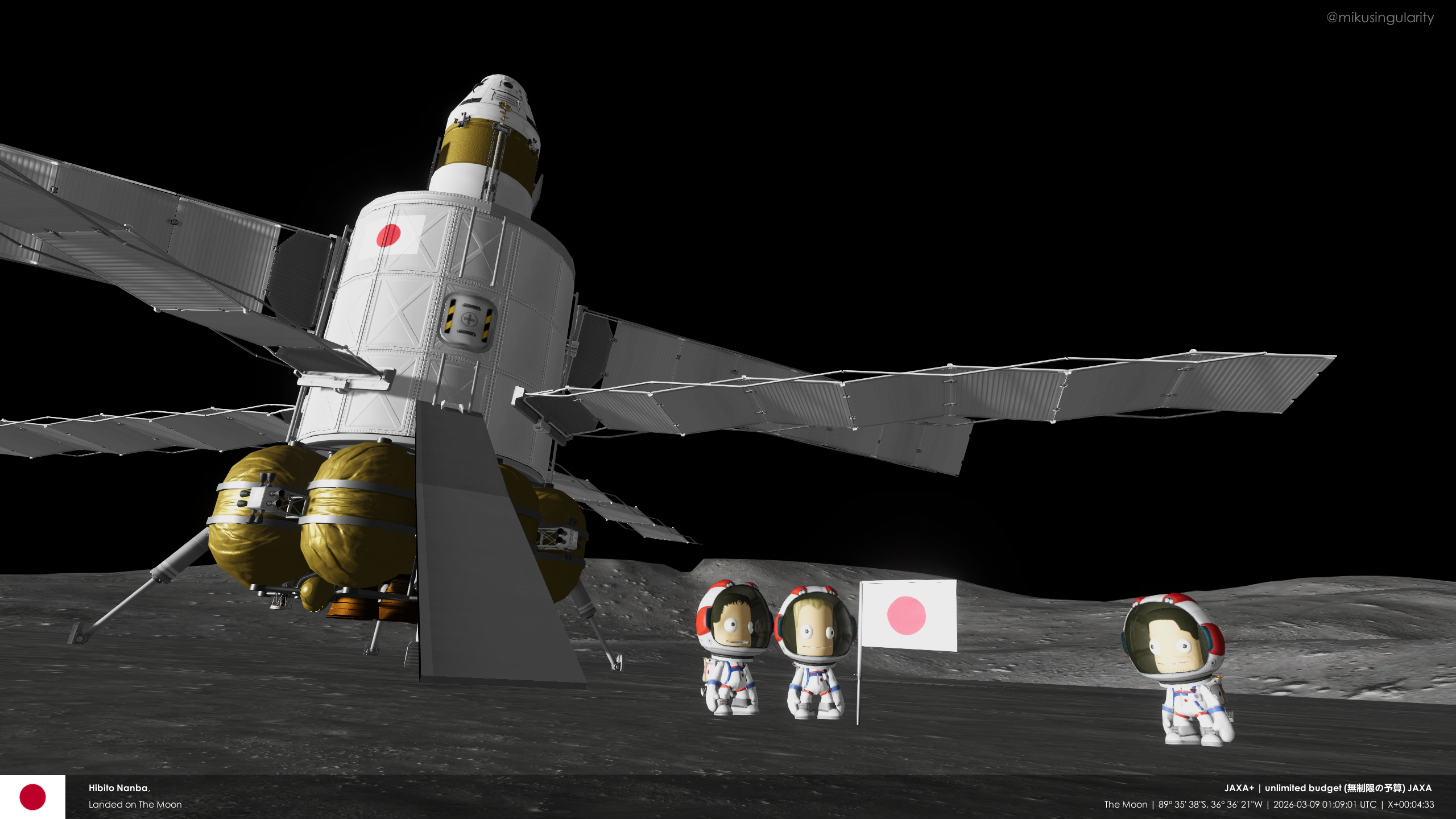 [JAXA+] 2026-04-06 - After being launched by an H-Z 200S, the Lunar Cruiser XL lands at the Moon's south pole using four descent engine pods, and takes the crew of Tsukuyomi to the rim of Shackleton Crater.
(note: due to the lack of braking friction physics in the landing legs, the Tsukuyomi base slid down 2 kilometers before settling down at a flat spot)
(the sun should be shining at the rim as it is a "peak of eternal light," and the Kerbalism mod is detecting sunlight) 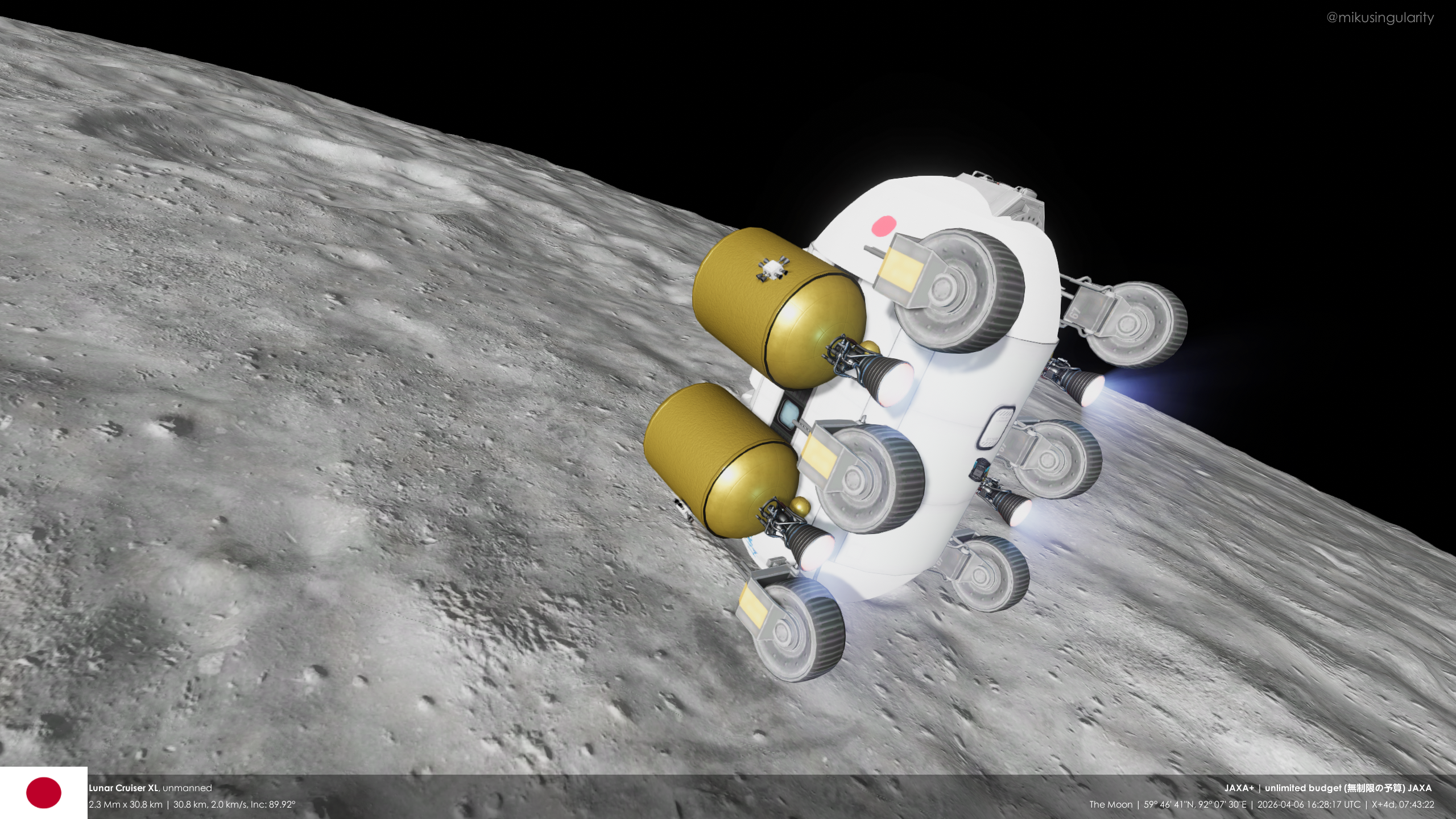 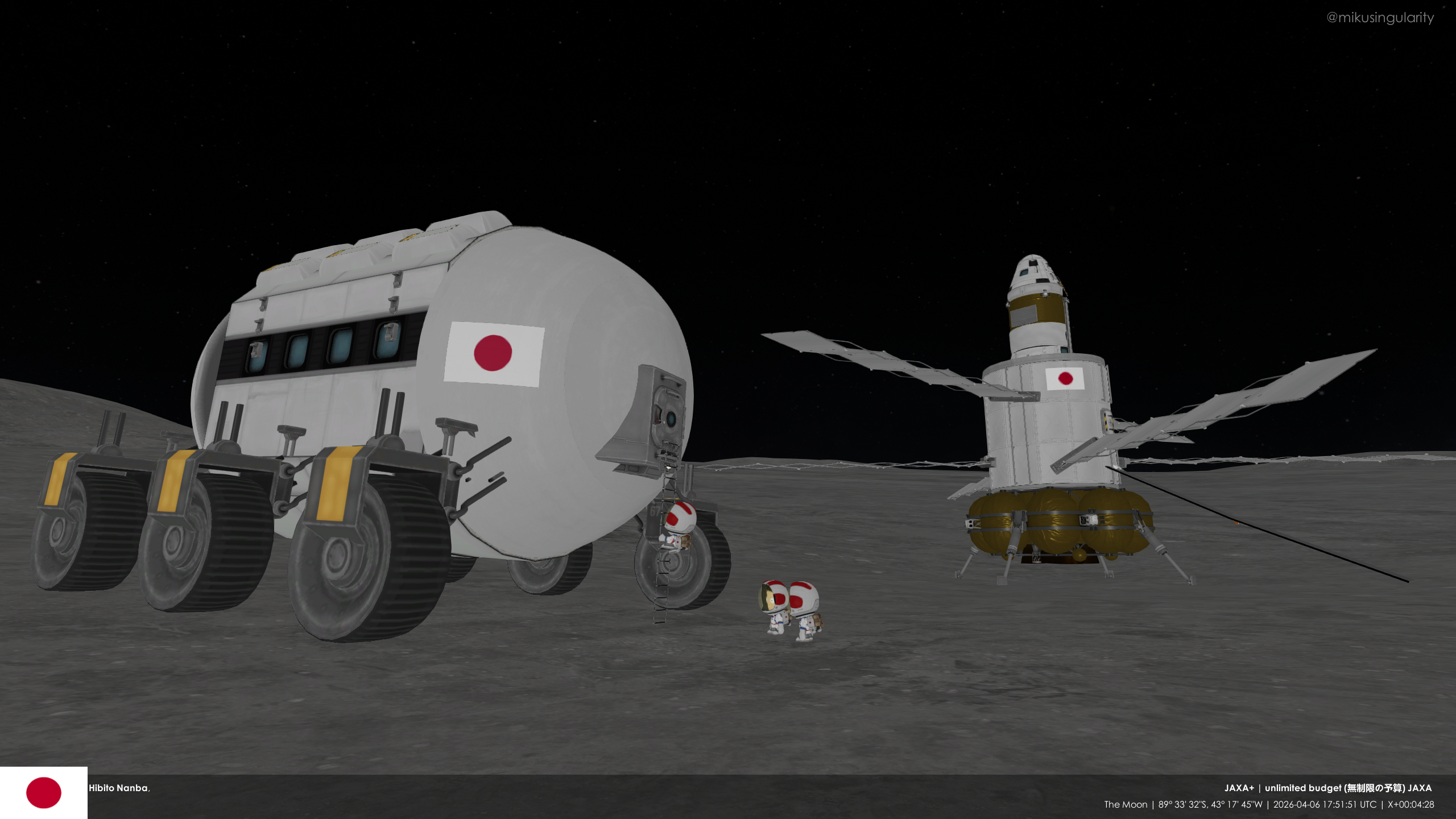 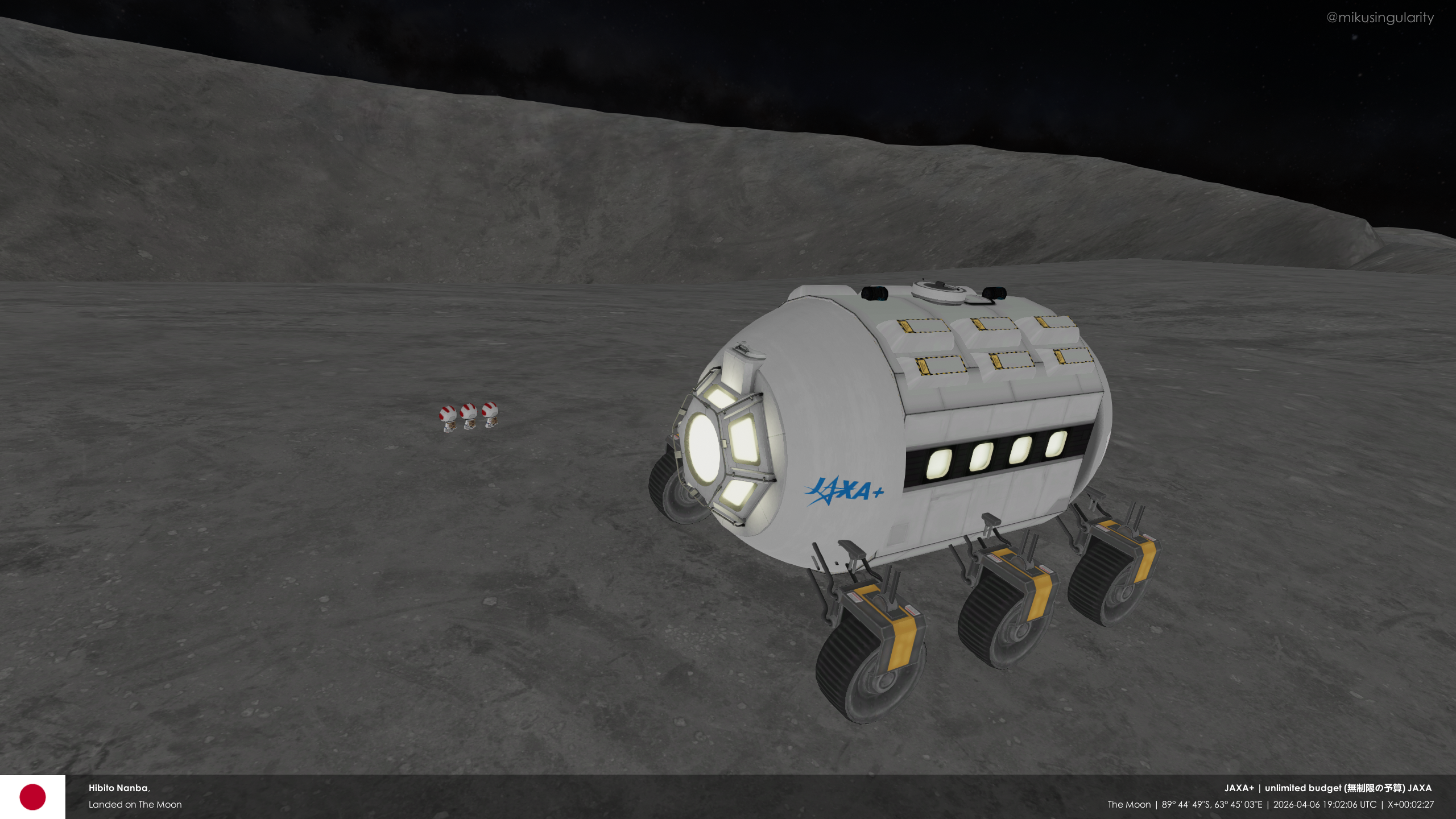 [JAXA+] 2027-03-09 - After a year staying at the lunar south pole, the ascent module of the Tsukuyomi lander launches to Earth, re-entering and splashing down in the Atlantic Ocean over 4 days later. 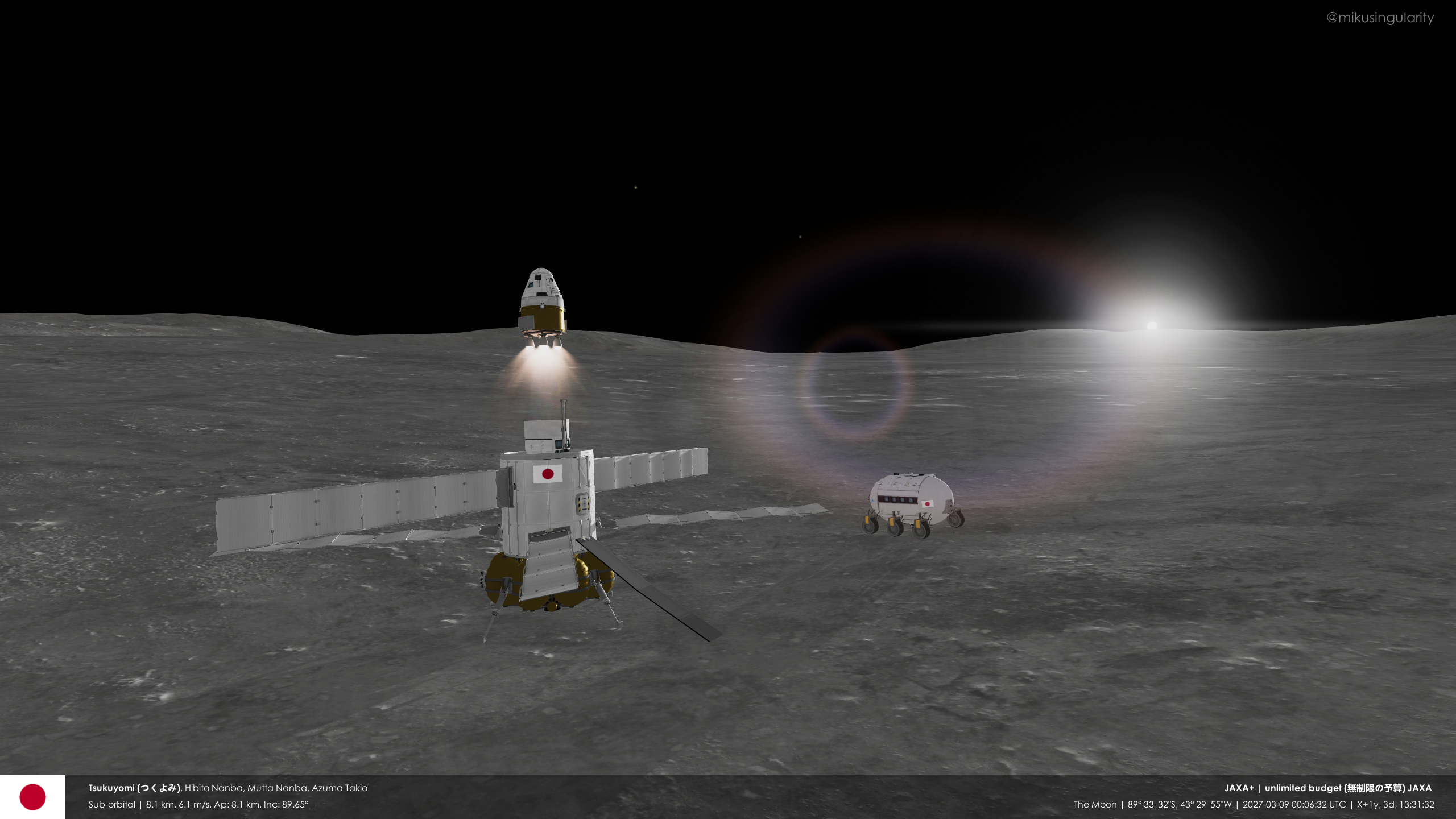 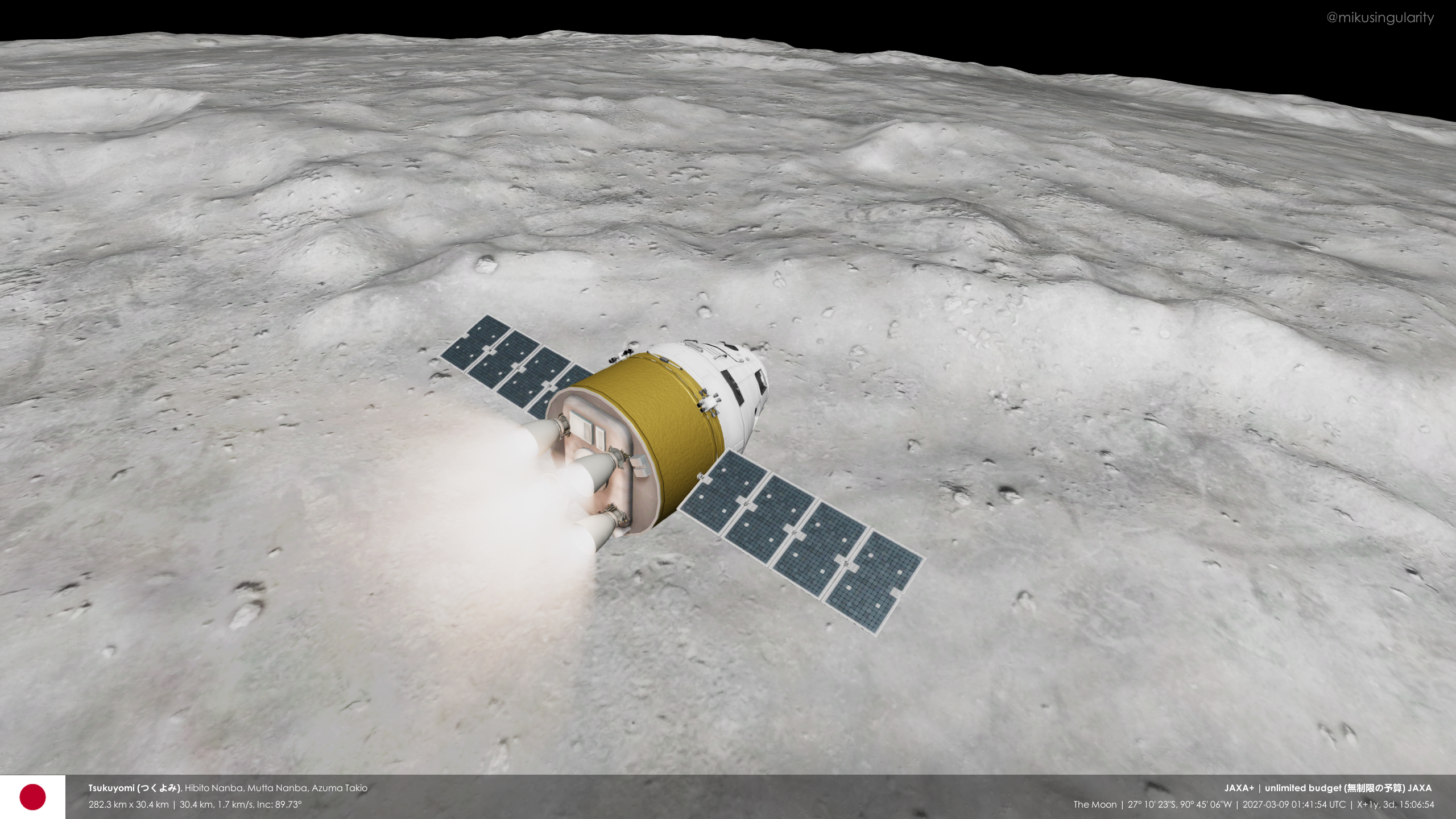 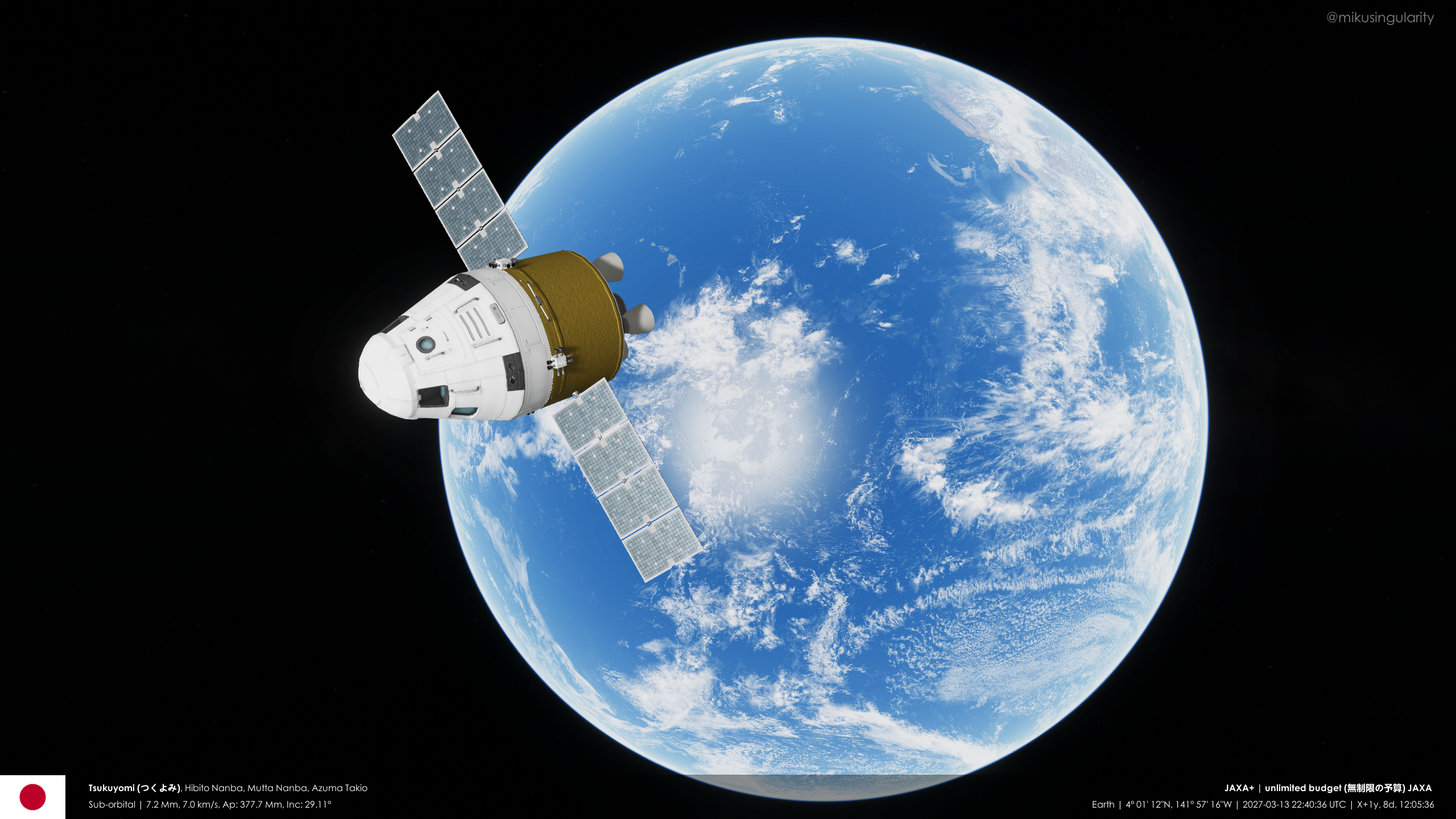