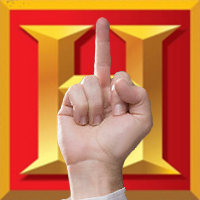 Like many cable channels, the History Channel began out simply enough, but right on target (remember when MTV was about music and not trying to showcase the most retarded examples of all ethnicities, or when G4 involved video games and not Cops and Cheaters reruns). That target being, of course, history.

Although simple, with program titles made in early photo shop and every voice-over seemingly done by Kenny Rogers and other raspy voiced country people, it did its job (albeit it was really friggin' boring). However, the History Channel slowly fell into a Hitler slump, and was unable to escape into anything not World War Two related. This lead many to deride it with the name “The Hitler Channel”. Things actually got so bad that they had to have people specially supervise footage used since they were reusing the same stock footage to oblivion (that's not a joke, that sh*t is true).

Eventually the History channel saw the light of its ways and returned back on track to covering all areas of history…for like a year. And then it slammed head first right into the crazy bullsh*t. The History Channels current program roster consists mostly of apocalyptic propaganda, Nostradamus, and aliens. And, in equal part to all of these, conspiracy theorists and various nutso's that no academic would trust are interviewed, and countered in absolutely no way, shape or from with the actual information or logic that would otherwise disprove them. But then again, that might hurt ratings. Also included are attempts to join the Dan Brown bandwagon, which include putting conspiracies not even found in the books. Like MTV and G4, the History channel has also begun programming which has nothing to do with the channel theme, including “Pawn Stars”, “Ice Road Truckers”, “Life After People,” “Ax-Men”, and “American Pickers”. While this programming, unlike the others, does not suck, it's not history.

Because of what the History Channel has become, it is the frequent target of derision by AlternateHistory.com members.