White Aurora said:
CRF is out!
Click to expand...

You folks want me to do a "joke" changelog akin to the "What It Really Means" that I did for 1.0.5a "Rule Britannia"?

AeroTheZealousOne said:
You folks want me to do a "joke" changelog akin to the "What It Really Means" that I did for 1.0.5a "Rule Britannia"?
Click to expand...

Glad to see the update having come out, with a rather large number of changes that do in my opinion enhance the game. Not having to worry about the AI ending your game early by Diplomatic Spat popped out the most, if only because I didn't believe something like that would have been implemented. Can't digest it well at length though at the moment; tried going cold turkey off the Oxycodine with the pain from the surgery having passed, but now my train of thought tends to fuzz over and my head muscles like to tweak in the interim. Of all the times.......​
​
Anyway something I wanted to run by people here, I intend to put it into another proper critique list once my head has cleared and I've experienced the new content, is the concept of Ammo alongside Fuel. Considering how critical supplying fuel to your forces can be, especially for those countries which focus heavily on Armored or Mechanized Divisions, it seems odd that there isn't an equivalent in munitions when that is arguably even more important whilst also being universal. Some would say that it would be covered under the equipment produced but, well, you should still be able to have a gun even if you don't have the ammo to feed into it.​
​
Anyway, I've looked at a number of different attempts at tackling this, but they all seemed to have caused more problems then they solved. Usually the solutions revolved around the ammo being produced as another piece of equipment with extremely low reliability, but the drawbacks of that approach become apparent once you think about it for any length of time. What I have not seen tried though is a co-option of the Fuel mechanic which, as an already established system but provided it isn't hardcoded, could within reason simulate the production of munitions. Just as Civilian Industry is used to convert Oil into Fuel, Military Factories would be used to convert.... well, nothing in this case..... to Ammunition. I'd argue that the appropriate ammunition for the equipment is just being produced alongside it.​
​
It's not perfect by any means, may not even be possible to implement. Still, I think its a major element that is missing from the core game at the present. ​

chankljp said:
For this occasion, I really want to bring up this post that I made all the way back in 2019 about a hypothetical Bormann visit to the US is going to look like....
Click to expand...

As it turns out, the real thing is even more hilarious compared to what I had envision.... 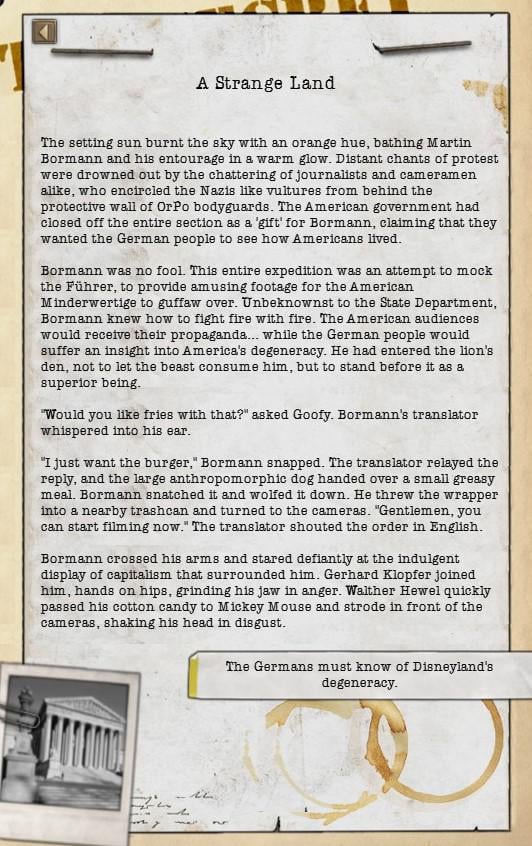 White Aurora said:
Sure, let's see it.
Click to expand...

I'll work on it following my Ireland run (and maybe another USA run), but I do have a few teasers:


Major Additions:
* Albert Speer now actually has to deal with the Oil Crisis, not just whiny former slaves and Willy Brandt and someone who was The Pope IOTL.
* Hermann Goering's Germany is now a bajillion percent more playable and an aspiring player trying to paint the map gray will have less of a rough time due to bugs but will still have to put up with other things like the economy and reality maybe another civil war
* Content for Ireland, which is arguably the most important and exciting thing added by this patch even if its playability is limited to roughly just five paltry years
* A feature in the menu has been added which lets players disable World War III occurring over that goddamn shrimp boat in May of 1967, mainly so that that the devs can try to get the community to stop bickering over the world blowing up over something largely out of their control.

Minor Additions:
* Stefan Tiso now has a small biographical blurb, but apparently Josip Broz Tito still doesn't have one for some reason
* The contenders in the German Civil War now have capitulation quotes, which makes a Germany campaign that much more playable and potentially depressing
* U.S. President John Glenn now has significantly more power to unfuck the country should Strom Thurmond have happened to be his predecessor
* Italy in 1969 and beyond is finally playable

Bug Fixes:
* Margaret Thatcher has finally averted her racism from seafood. Good for her I guess, but I'm still not letting her lead England following a Collaborationist victory unless I'm feeling particularly sadistic on a given day
* Margaret Chase Smith no longer has pseudo-Lovecraftian abilities some would consider to be unnatural from growing up and living in Maine, and as such the NPP no longer forms a hive mind during her administration no matter how effective she is at holding the party together

Balance Changes:
* Robert Kennedy's liberalism is less likely to spread overseas, something I didn't know he was at one point capable of until now
* A Bennett Presidency which doesn't rock the boat on the Civil Rights issue is now somehow able to remove the Jim Crow national spirit, something which I think is implausible but what do I know
* The Gibraltar Dam has been made more realistic by requiring more time, effort, and money to be poured into it to get the damn thing in working order and own the Nazis
* Falangist Spain now has a rate of victory in the Iberian Wars comparable to its vanilla HOI4 counterpart

Quality of Life Improvements:
* Liberalism for Bobby Kennedy is now visualized as "how likely is it that you and Vice-President Humphrey will both be shot and killed by a loon in Los Angeles?"
* Global Thermonuclear War is now less likely to fry your CPU. That being said, it's still capable of doing so, and as such OP recommends you get something better than a $5,000+ gaming PC to play TNO
* Focus trees getting reloaded will no longer reset the current focus. The biggest benefactor of this is the Ordenstaat Burgund which before this couldn't go five minutes without whatever focus it was taking getting reset

Other Changes:
* The Unity-Pakt, an unholy abomination that should have never been part of the lore, is now dead. Long Live the Einheitspakt!
* Francis Parker Yockey is now semi-accurately referred to as a National Socialist, and Gus Hall is now 100% accurately referred to as an Authoritarian Socialist. None of that moderate but still semi-accurate fascism or misleading libertarian socialism garbage anymore on their characters.
*Potential Presidents Strom Thurmond and/or Curtis LeMay, if they have completed their main focus trees, are now able to negotiate for the treaty ports if RFK didn't get around to it before he died or if Wallace didn't get around to it because racism, reflecting the cursed nature of this timeline but at least giving them something to do if their predecessors didn't make it past August of 1966 or something
* A post-nuclear world now resembles Mad Max significantly less thanks to the Oil Crisis being butterflied away if World War III happens before 1970
* Political power no longer matters if someone wants to expend their entire nuclear arsenal on thousands of targets on the other side of the world


A full version will (eventually) be made, but I hope you got a little laugh out of this here! Let me know what your favorite parts were .
Last edited: Nov 21, 2020

What's funny is I've never had the shrimpocalypse.

The one time I even had that event happen and partially escalate was when I messed around with the Zombies after Halloween. (I still never found out if there's any events for the world fully being zombified...)

Just accidentally completed a Hyperborea game. The idea of being so occulty/cultish/insane so as to out do the Nazis is.... interesting.

The colour is agonising. White or a tan/creme colour is what I'd picture.

chankljp said:
As it turns out, the real thing is even more hilarious compared to what I had envision....

If this is Bormann's reaction to Disneyland, I'd hate to see what would happen when he learns about Mr. Rogers.

Incoherent screaming, followed by an angry demand to appear on the show to “set the record straight” 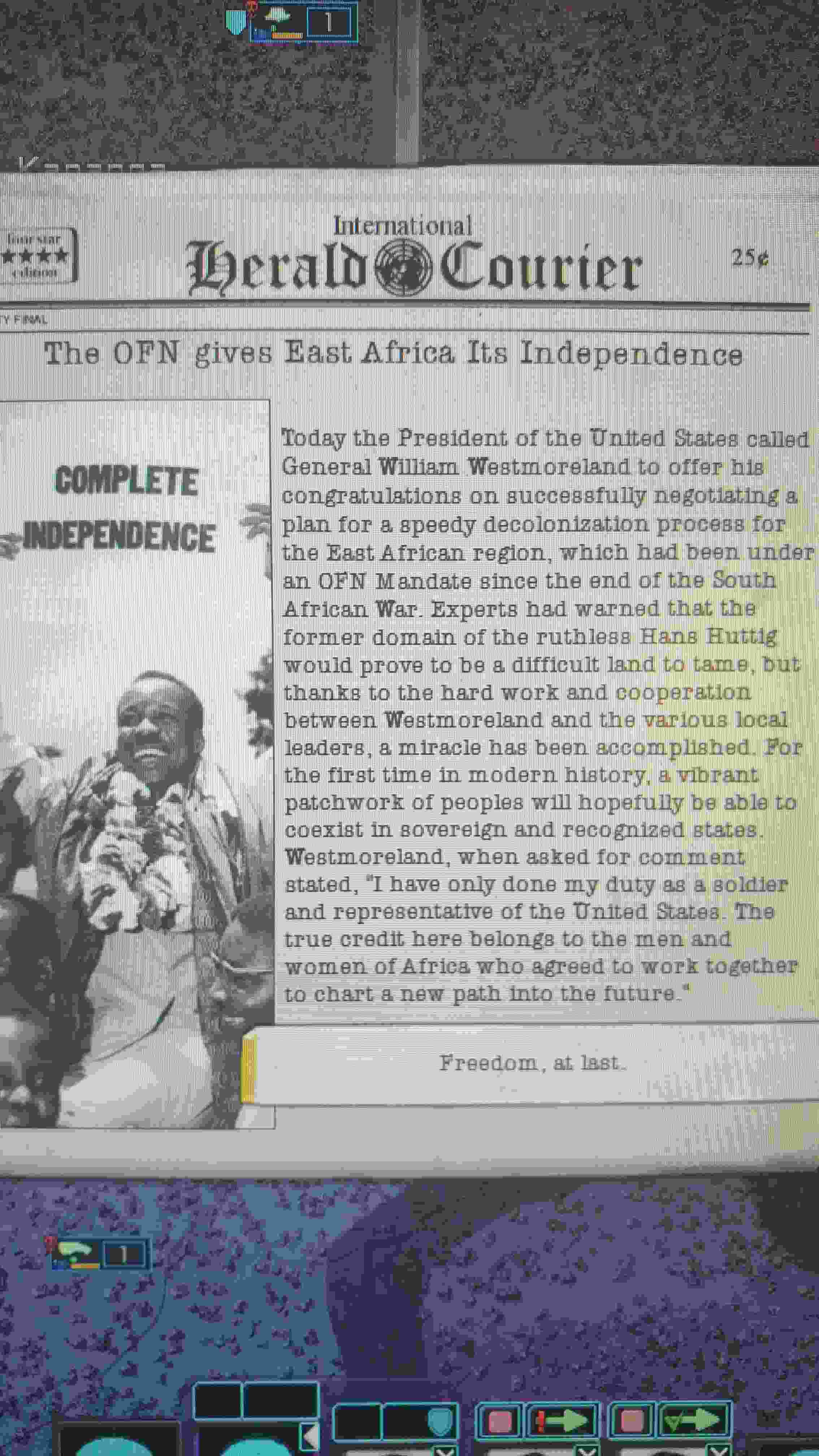 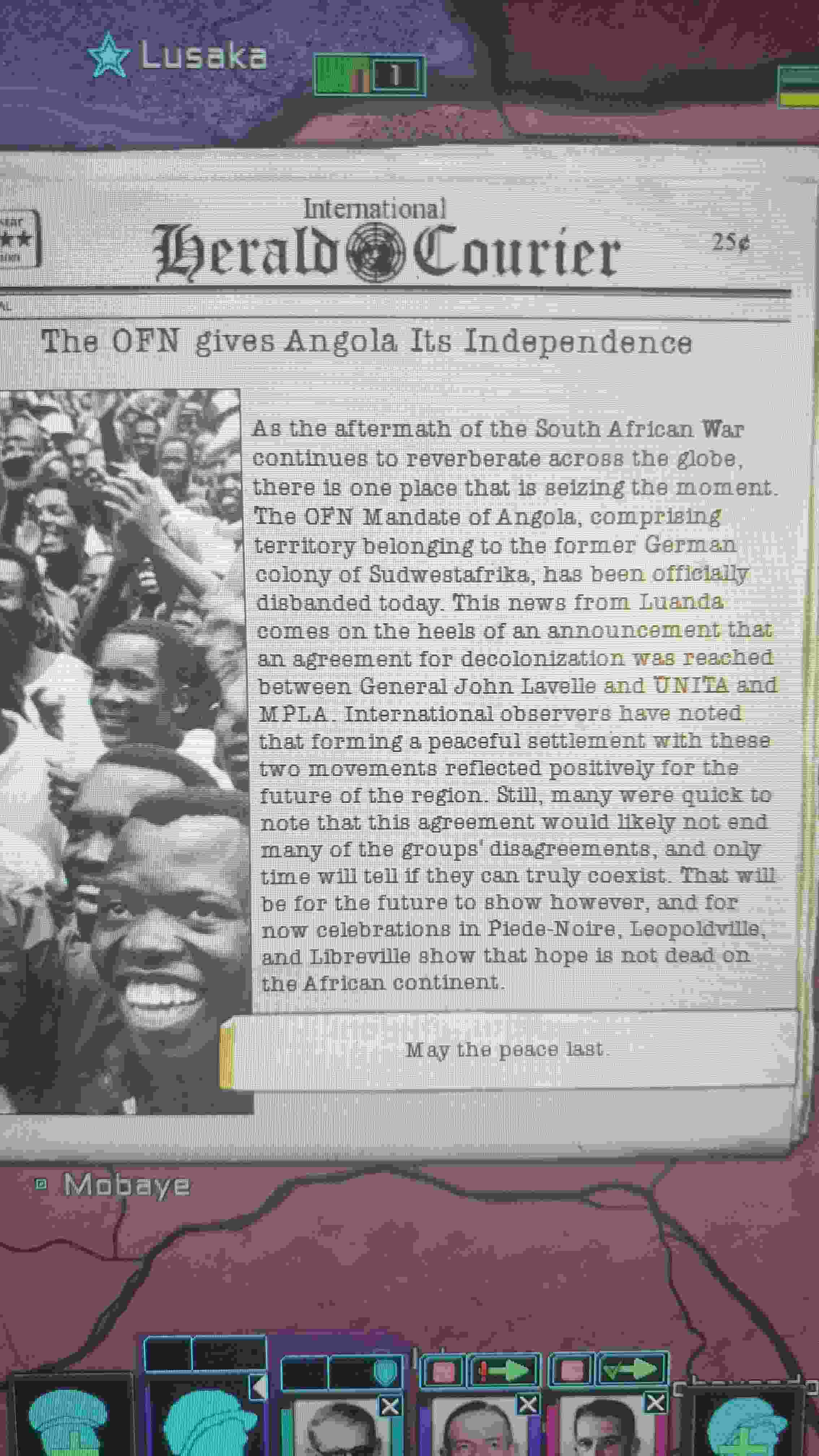 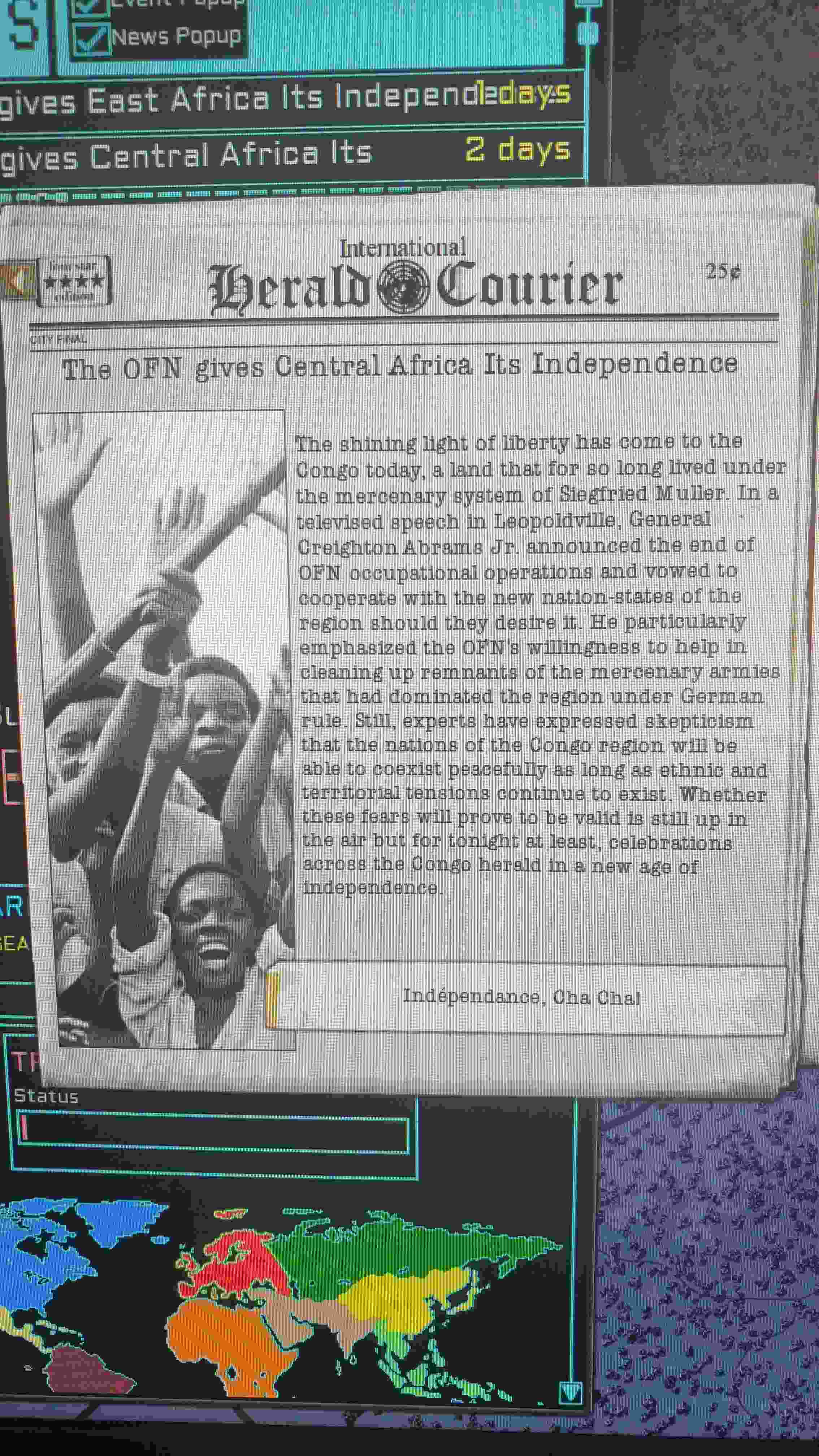 but, all that hand wringing about the Mandates?

Yeah, they work, they don't exactly work well, but you can get a decent result out of them

but, all that hand wringing about the Mandates?

Yeah, they work, they don't exactly work well, but you can get a decent result out of them
Click to expand...

I’d assume you -really- have to work for that, though.

1. Yes, the death squads were a real thing, and worked in a triumvirate with the police and government intelligence. The role of the army is still disputed. Some say they played a big role, others say the actual army was busy watching the border, while the death squads dressed up as soldiers to fight the Tupamaro guerrillas. Mind you, there was a military coup at one point, but for the most part it was a dictatorship overseen by a civilian president and party hardliners with army influence.

2. MLN-T - the Tupamaros - are not an exclusively Guevarist organization here, but rather a big tent that also includes Uruguayan Nazis. And yes, Mujica is definitely around.

Bbone91 said:
Incoherent screaming, followed by an angry demand to appear on the show to “set the record straight”
Click to expand...

I believe I am missing some context behind the bit about Mr. Rogers? I mean, I know of Mr. Rogers' legendary kindness and empathy and all, but aside from that, what would be setting off Bormann so immensely? You know, aside from Bormann being a Nazi asshat, because that's a given.

Wow....that was intense. Never thought I'd have even the slightest bit of sympathy for one of history's most horrific mass murderers.

WerBell just emanates some sort of energy so far on this run that immediately makes him my favorite unifier.

DanielXie said:
Wow....that was intense. Never thought I'd have even the slightest bit of sympathy for one of history's most horrific mass murderers.
Click to expand...

...Do you not know just how little that narrows it down?

WhiteDragon25 said:
I believe I am missing some context behind the bit about Mr. Rogers? I mean, I know of Mr. Rogers' legendary kindness and empathy and all, but aside from that, what would be setting off Bormann so immensely? You know, aside from Bormann being a Nazi asshat, because that's a given.
Click to expand...

You see, Mr. Rogers' message of love and kindness is completely and utterly antithetical to the basic concept of Nazism. Since Bormann is so utterly revolted at Disneyland, a symbol of fun and happiness to everyone, he would more than likely be completely overtaken with rage at the thought of a man like Mr. Rogers, a man who taught several generations that each and everyone of them is special, and that we should always try to be kind and considerate of others.

WhiteDragon25 said:
...Do you not know just how little that narrows it down?
Click to expand...