ferdi254 said:
Sorry but what do tank crews need a lot of muscles for? Shells weigh below 20 kg camouflage normally is the small size not the big and the heavy lifting is done by mechanics. 155 or 203 artillery is a different matter.
Click to expand...

Remember, this is the sixties, the tools they will bring in the field won't be power tools.

Remember, this is the sixties, the tools they will bring in the field won't be power tools.
Click to expand...

Well, some tech in the SLaH-verse is more advanced. Tanks could have autoloaders on the horizon...

theg*ddam*hoi2fan said:
Well, some tech in the SLaH-verse is more advanced. Tanks could have autoloaders on the horizon...
Click to expand...

I can imagine it's not.

Mind you, physical size doesn't always translate into low strength - especially as shortness is better for tank crew. And IRL, multiple countries have had roles in armour open to women so it's fairly clear that they can do the work (the Royal Tank Regiment has been open to women since 2016, for instance).

Plus, worth noting that in the UK, even before they were officially allowed into combat arms, women were allowed serve in the Royal Artillery and did during the Afghanistan and Iraq Wars - apparently, they were allowed serve on 105mm L118 light gun crews. I'm not an expert but I imagine manning and maintaining an artillery piece would require a fair amount of muscle... If they can do that, tank maintenance and hatches shouldn't;'t be an issue.

Plus returning to shell size, 105mm is used on tanks (was used on the Centurion, is on the Abrams..) so...

ferdi254 said:
Sorry but what do tank crews need a lot of muscles for? Shells weigh below 20 kg camouflage normally is the small size not the big and the heavy lifting is done by mechanics. 155 or 203 artillery is a different matter.
Click to expand... 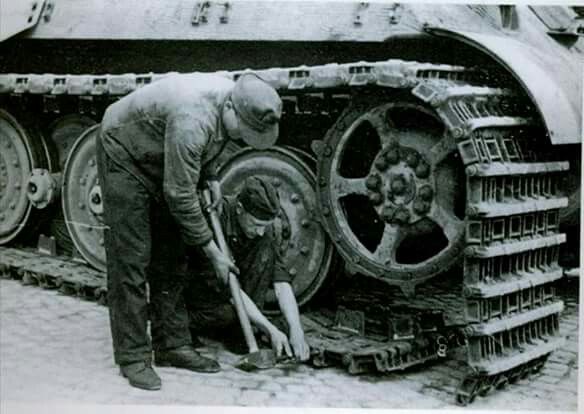 Changing or fixing the tracks of the tank, or most of the maintenance that needs to be done in the field.

Spring loaded hatches are 1930s technology at the latest. Just pop the lever & push, the spring does most of the work. Ships have been using them for far longer.
As for maintenance, winches & jacks help a hell of a lot.
Plus auto loaders are already a thing in the Luftpanzers where Suse's small size would be well suited.

I would think maintenance. Things like track replacement and track tensioning are task that require strength. Not to mention things like Jerry cans for fuel and water, ammo crates for the coax and commanders MG, etc.

One thing almost everyone seems to forget when talking about Suse Rosa's size, is that they are judging by today's average heights. Until the balanced diets that OTL WW2 rationing (in the West, at least) brought about, the average height was a lot shorter. For example, in WW1, the average height of a German male was approximately 1.67m (5'4"), the average height for a German woman was 1.56m (5'1"). They had to move stuff that was just as heavy, if not heavier, as their counterparts in the 1960's, who,themselves had a lower average height than today.

Peabody-Martini said:
“Look who I found” Jo exclaimed as Suse found herself standing in front of Ria and a woman who looked about a decade older than her.
“This is my Aunt Sigi, the first woman in outer space” Ria said.
Click to expand...

Suse Rosa is most likely going to become a tank hunter helicopter pilot.

Makes a lot of sense.

And won't that make daddy happy.

There are so many uses for a 40mm Gernade launcher. Everything from an M203 type arrangement to having something on a tank/APC/STuG for fire support to being mounted on an attack helo or transport helo. You can have a single shot up to full auto belt fed. Its just time until someone adapts and existing design to use it.

Auntie Sigi is going to love that.

EWilanO said:
As for Suse, if she can't join the Panzerkorps because, she might as well join the AT-helos. If she can't join'em, she may as well giv'em brown pants.
Click to expand...

There is another option available:
Suse is determined, focused, fights to win, is small and appears harmless. Like a kitten.
Or a cat.
KSK all the way. For when you want the opposition to spend their time inspecting their surroundings & their own tanks REALLY closely.
Could you imagine how terrifying it would have been to been a Soviet tanker who woke up in the morning to see a scare-cat planted in the middle of your overnight laager?

For some reason Ina felt that she couldn’t go to her parents for her latest problem. Instead she came to Kat’s door.

“There is something wrong with me” Ina repeatedly insisted on because of what had happened with her friend Suse getting into a fight on Ina’s behalf a few days earlier.

Kat knew what the real problem was. Ina had inherited the best aspects from Hans and Helene. Kind, optimistic, big hearted and generous to a fault. Unfortunately, she seemed to completely lack the hard-nosed sensibility of her parents and had a serious blind spot towards those who she thought were her friends. The result was that she was taken advantage of constantly. In recent years, Ina had grown into an extremely beautiful young woman and that had drawn a great deal of jealousy from her peers as well. Simply put, Ina was an innocent in an extremely mean world and those closest to her, her best friend and brother were getting into fights to protect her. The thought of what might happen to Ina if she didn’t have that protection chilled Kat to the bone.

“There is nothing wrong with you” Kat said to Ina.

“But I started that fight” Ina said, “If I had just not lent Lili that money then Suse wouldn’t have confronted her about it.”

“You have no control of what other people do” Kat said.

Kat’s understanding was that Lili had talked Ina into loaning her what amounted to a week’s worth of pocket money to her. A month later Lili had shown no inclination towards paying it back and Suse had decided that it needed to be taken care of. It had swiftly escalated from shouting to a physical altercation. Unlike most girls, Suse wasn’t afraid to throw a punch and she had pretty soundly thrashed Lili. Gerta, who was ill-equipped to deal with the situation, had found herself having to deal with angry phone calls and threats of legal action by Lili’s parents.

“Momma says that I do and that these things happen because I don’t think things through” Ina said.

That sounded like the sort of thing that Helene would say, it also suggested why Ina had come to Kat this time. She needed to talk to someone who seemed to understand. The problem for Kat was exactly what did she tell her niece?

In the end Kiki decided that she needed to accept Lucy’s invitation to have the midday meal with her family. Apparently, everyone was going to be there except for Lucy and Erwin’s son had had remained in Stuttgart. He didn’t get up this way during the summer as much as his parents would like and was too involved with his work according to them. Her hope was that her hosts would not go all out on her account. Gertrud had just smiled and said that there she might have trouble getting that through to Lucy.

Brushing out her hair, Kiki wished that the chalet had a mirror and not for the first time. Luckily, the blue floral print sundress she was wearing was simple enough that she didn’t need to see what it looked like. Peering in the hand mirror, Kiki thought that her hair looked alright before looking over her shoulder at Rauchbier who was watching her from under the table, his tail beating on the floor from the instant he was noticed.

“We’re going out” Kiki said, and the dog was on his feet and at the door in an instant.

Kiki clipped his leash onto his collar before opening the door filling the chalet with bright sunlight. It was a gorgeous day with the crystalline clear blue sky, the mountains across the valley looking like they were close enough to touch.

The sheep who had appeared in the meadow were going about their usual sedate lives. The lambs stopped what they were doing and ran to ewes who kept wary eye on Kiki as she passed. They wouldn’t go anywhere near so long as she had Rauchbier with her.

“They just don’t want to play with you Smoke” Kiki said as they walked down the trail.

Rounding the trees, Kiki saw the main house. Its design was clearly inspired by the mountain chalet like the one that Kiki was staying in, just on a larger scale and it had amenities such as electricity, telephone and running water. Knocking on the door, Kiki waited patiently until it swung open, answered by Gertrud. “Lucy will be glad you made it” She said as Kiki entered. The house was filled with mouthwatering smells as Kiki made her way back to the dining room. Rauchbier ran ahead with the single-minded determination of dogs towards the familiar. Kiki was wondering what he was doing when she saw that Benjamin was already at the table talking to Erwin.

“What are you doing here?” Kiki asked as Ben scratched behind Rauchbier’s ears.

“I called here a few times to see how you were doing and the General decided that I should come and see for myself” Ben said.

“I think that it is wonderful that your sweetheart came so far out his way for you dear” Lucy said as she walked in from the kitchen, “We would have warned you that he was coming except you’ve been a bit scarce since you got here.”

Kiki was trying to figure out how to respond to that. Sweetheart?
Last edited: Feb 13, 2020
Threadmarks
You must log in or register to reply here.
Top
Top