"Phil won't leave his room" - A Doctor Who Production History

All is revealed in Part 11

The doctor of who

1.when will the plot breakdown of the TV movie be released?
2.who plays ITTL Yates?
3.will the master be involved in TTLs TV movie, or is he permanently dead after the six doctors?
4.who would be the most popular companion?
5.would the reaction to the 1996 American series be good or bad?
6.what would be considered the best episodes of doctor who and what would be the worst episodes of doctor who?
7.would there be not my doctor type fans in 2003 when the first female doctor debuts, or would the reaction be different to OTL?

1. When it's finished. I've handed it off to someone else to "pollute and dilute" to give it that "compromized by network TV" feel.
2. Ray Lonnen as outlined in Part Two
3. He's dead. He appears in development documents but ITTL, that idea gets shot down.
4. Jo or Kay, there's something classically "young woman asking questions" about them. They're archetypal.
5. That'll be in Part 33 or 34. It's already written.
6. The 70s are seen as the golden age. The Fifth Doctor's era is seen as a little dry and esoteric. The Sixth Doctor was huge in his time, but he's now seen as not having very many really classic, memorable stories.
7. The female Doctor is in 1998. There's a pushback, but because there's never been a long Wilderness Years, there's a certain lack of intensity in a lot of fandom. Also, social media is just beginning to be a thing and it's not in a position for big hashtag campaigns. The internet is a few years ahead of OTL, because of David Owen's "Programme for Change" investing a bit more in a digital infrastructure, followed in the US by President Gore in the late-80s, early-90s.

I've gone back and changed the 2003 revival to a 2004 revival to make room for a slightly controversial and oddball 40th anniversary special. 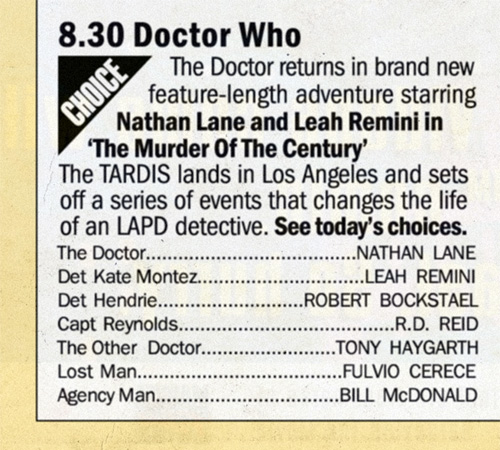 The doctor of who

So, The Murder of the Century is the ITTL TV movie?

It is. It's frippery on my part, explained by the German buyer wanting a title to differentiate it from just a showing of Doctor Who. It's just Doctor Who in the US.

The next part might be the TVM plot or it might be a short obit for Jon Pertwee which will introduce a reference to a film franchise that hasn't been mentioned yet. The part dealing with the fallout of the TVM and US series is written and the part on "The Wilderness Year" is half written.
Threadmarks
Reader mode
You must log in or register to reply here.
Top
Share:
Share
Top