Inspired by the similar activity on Poland done eight years ago now - wow, time flies! - I'm interested to see people's opinions on optimal post-WWI borders for a Ukrainian state, if such a state had managed to exist and survive. I'll give the same disclaimer as the Poland run - these borders are preliminary, feel free to draw over them. 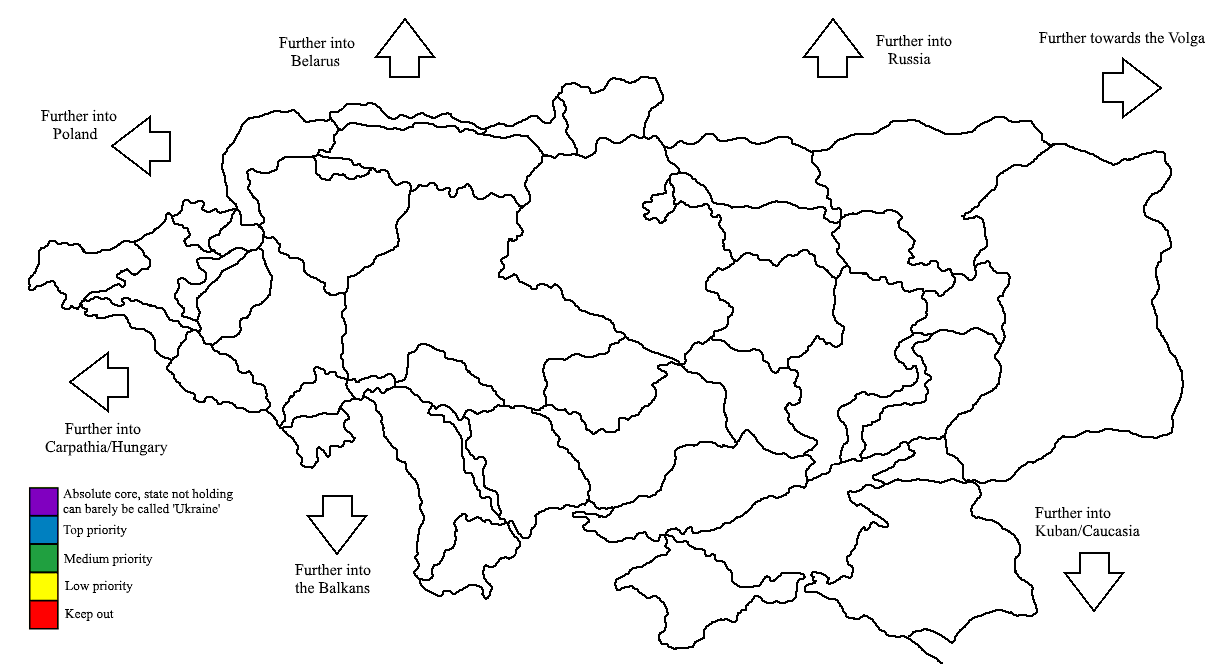 This is my map: 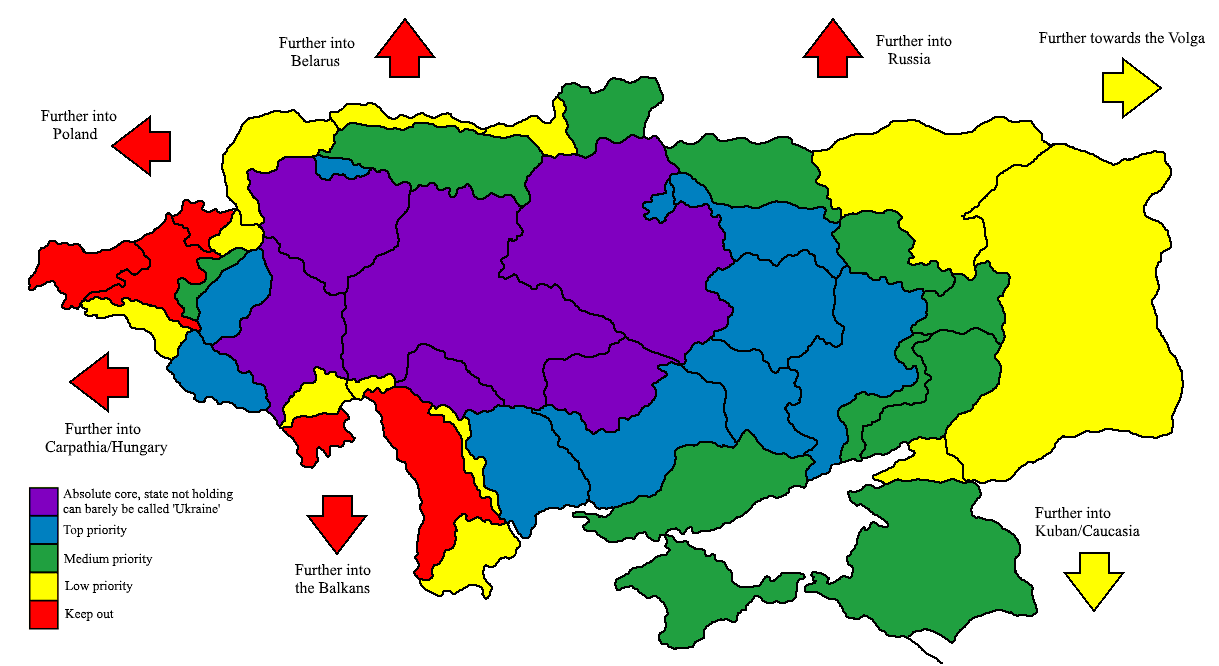 I might have to mess with my border version later, but here is my first take based on my (albeit, limited) knowledge of the region and times. The general idea is to eliminate tensions with neighboring states that Ukraine would have to depend upon to remain independent.

Absolutes - must have access to the sea and must have Kiev. They didn't have the portions from Galicia OTL, and in the worst case scenario they could live without, but in the west, they would be a bargaining point (and if they didn't get it, they'd get concessions elsewhere). In the east, the rest of the blue top priority remains fleshing out the state and creating a contiguous region without any exclaves (as while Cherson might not be as "high" a priority, other regions are, and as such it must be included in the blue).

As for the green, if Kuban is sought after, then a contiguous territory must be had - there should be no exclaves or sections separated from the mainland of Ukraine - as such, Rostov must be annexed to reach into Kuban. The rest of the west is filling out border regions, while getting as much of Kursk and Voronezh as they can. In the west, Ukraine would attempt to get as large of a region of southern Belarus while that area is partitioned. Crimea is included here, as once it is isolated from Russia, it might as well be united with Ukraine at this point - it'll prevent border conflicts there.

Yellow areas are cautious, depending as the case may be. Annexing more of the East, or additional parts of Kuban, is only viable in a total Russian collapse scenario, not in a resurgent Russia/USSR. In the north, additional annexation of Belarus or Russia more means for random border towns, either to include strategic or industrially important areas/cities. Kursk itself comes to mind, but this is "as the case may be". Lvov/Ruthenia/Transnistria are nice if you can get them, but don't add enough to Ukraine to die upon the hill.

Important steps - ensure Romania gets all of Moldavia it wants (including Besserabia - not even worth it for Ukraine). The same with Poland and Czechoslovakia - ensure that those nations have as few conflicts with Ukraine as possible, as to survive Ukraine will need their support, as the UK/France will not always be there.

Might revisit later, after adding some more borders from the OTL Polish second republic. Figured this thread needed a bump anyway.

Territory with an ethnic core not Ukrainian in identity sets the *Ukraine up for dissection by enemies when Russia comes knocking.

Obviously, any *Ukranian state without Kiev isn’t worthy of the name, but to antagonise Poland in the early stages of *Ukraine’s life is stupid. Bessarabia - as posted above - gives the Romanians an excuse to attack or not help, whilst not providing *Ukraine with any insurmountable benefit.

well this thread is going to end well..

okay.. Blue + purple add crimea, kerch, green to the north and west. the rest of the yellow and the rest of reds are tokens for trying to find a way to keep people the hell out of destabilizing Ukraine.

honestly the map as is, is fine

honestly you need a defendable border in the east and north and you need a population willing to fight .. uhm.. for Ukraine.. so a blue and purple Ukraine it is I guess

Well, in the end, I finally went and tried to edit in some of the Polish Second Republic border for the sake of highlighting... Most of my previous arguments still apply, but I revisited a region or two after reconsideration. To summarize:

Core in central Ukraine - access to Black Sea necessary.
Ensure eastern part of Ukraine is under control, and put up a fight on West Ukraine. If they get it, wonderful, if not, it might force concessions elsewhere.
If Kuban (historic Ukrainian population of a plurality, with majorities in some/many locations) is expanded into, must have direct land access through Rostov. No Crimea exclave in this step can be left.
Further expansion where can be done, although only minor additions into Kuban/Belarus/Russia as the case may be.
Aside from what is West Ukraine, do not fight Romania, Czechoslovakia, and Poland hard - they will be necessary to assist in defending Ukraine against coming aggression. 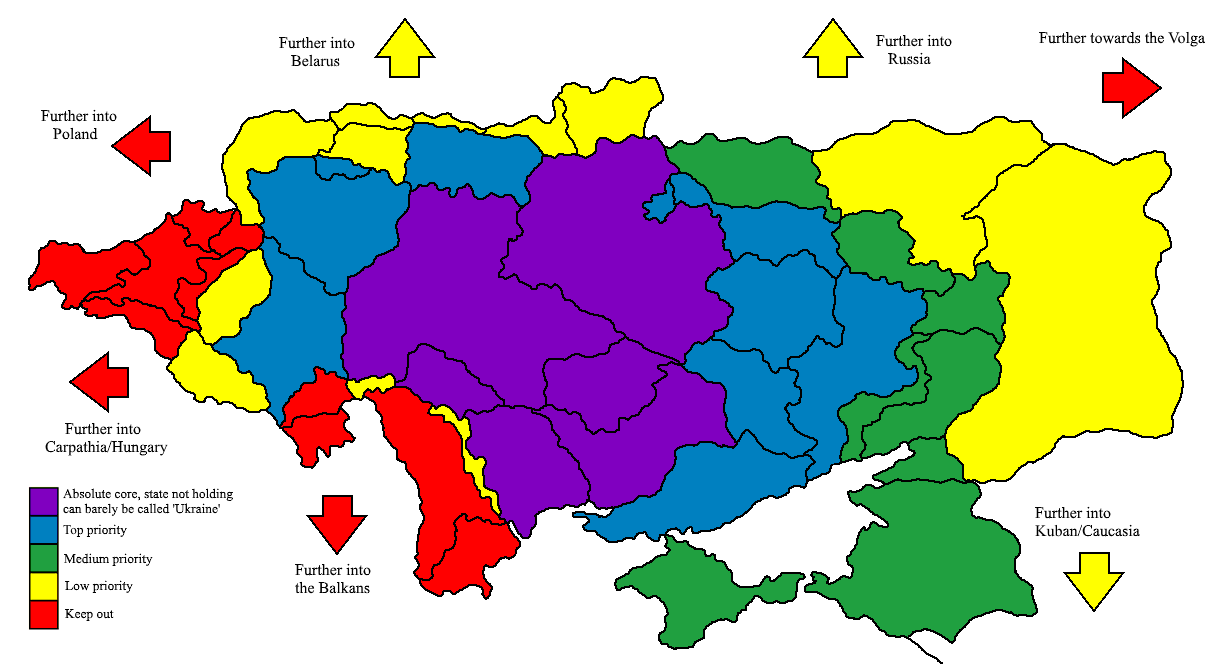 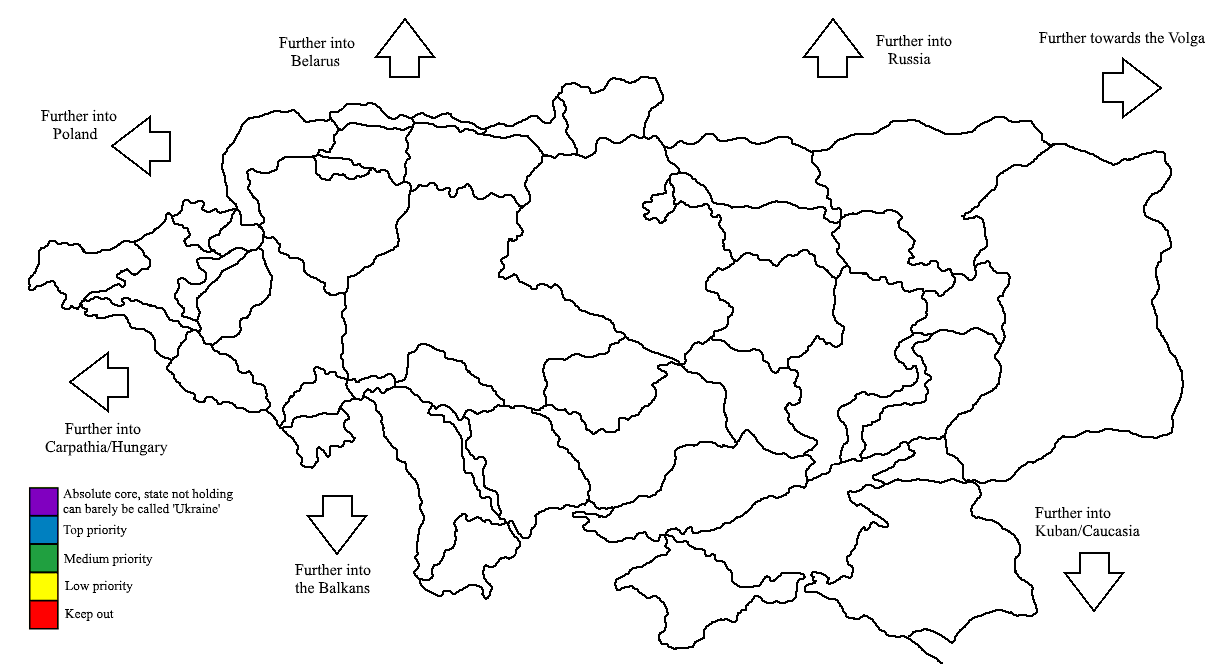