MotF 265: All Along the Frontier

The Challenge
Depict a demilitarized zone.

The Rules
No special rules.

Discussion must take place in the main thread. If you post anything other than a map entry (or a description accompanying a map entry) in this thread, you will be asked to delete the post and have your territory demilitarized.

Please continue to submit your suggestions for future contests here, submit to 264 and 263, and vote for the next theme here.​ 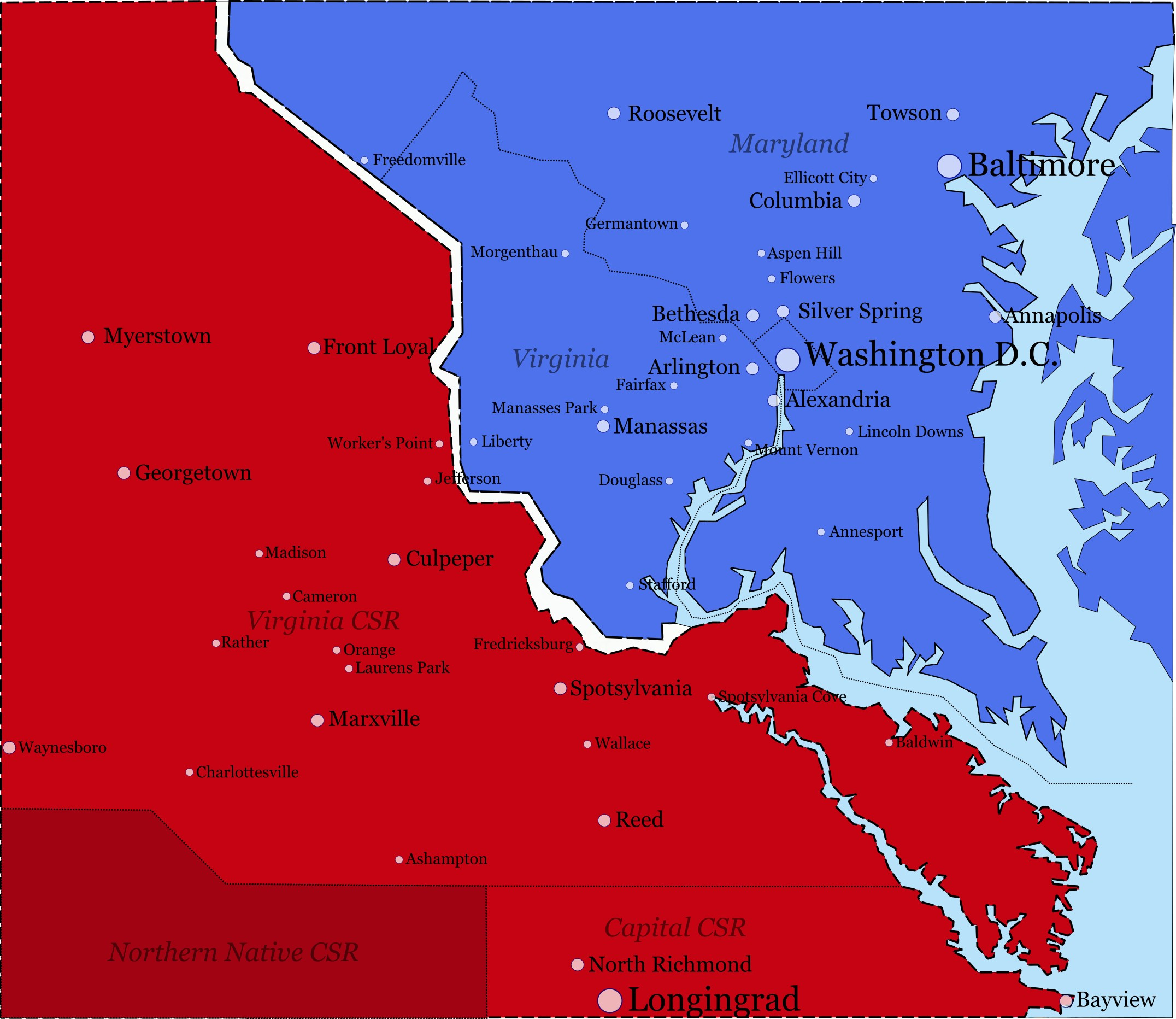 The story of the Confederate Socialist Republics and the United States is a long and interesting one. The two nations, now famous for how different they are, were once under the same government, and came from the same roots. It wasn't until the War Of Southern Succession (1861-1865) where they diverged.

What were only protests became riots after the economic collapse in 1929. Meager pensions soldiers had relied on disappeared as the elites took to keep themselves above water. Revolutionaries under Huey Long declared a socialist state similar to the USSR in 1931, and quickly took over much of the country. By 1933, it was clear Long would win. Blease's forces held the last line of defense on the James River, but a US intervention in Northern Virginia caused the collapse of his government.

Following a 1935 treaty with American President Floyd Olson, Long cemented his rule as the first Commissar-General of the Confederate Socialist Republics. Following the purge of over 200,000 individuals, the new CSA had solidified it's hold on the country. Long achieved popular support by implementing programs such as pensions, public education, and infrastructure as part of his Communist ideology. While these programs were incredibly bare bones by US standards, they were unthinkably left for the Confederacy. The CSA also established two autonomous SSRs for 'Natives', which effectively meant Black people.

The country stayed neutral in World War II, as Long implemented more programs. A wealth cap of $50,000 was established, and estates over 100 acres were disbanded and redistributed. Long died in 1951 relatively popular. His replacement would not be.

George Wallace ascended to the Politburo at the age of 23 and to the Central Committee by 28. He took over after Long died by currying favors and immediately cracked down on all dissent. Over 1,000,000 people would be executed over the next six years as Wallace solidified his power. His 40 year reign would see the deaths of over two million more. But the Wallace era is over, and the Cold War continues.

The CSA is currently under the control of Commissar-General Tim Scott, the first Black person to hold the office. To it's north, the United States of America stands strong. Free from having to pay for reconstruction, the US invested heavily in internal development, having a long (1901-1939) progressive era to help. Programs like universal health care, free school meals, a high minimum wage, universal childcare, and massive green energy investments enable the country to have a much higher standard of living than the CSA, in both GDP per capita ($90,000 vs $15,000), HDI (0.952 vs 0.826), and only a slightly higher GINI (31.2 vs 30.8).

Both countries staff a 10-mile demilitarized zone after conflicts and clashes throughout the 20th century.

In this world, the Song Dynasty was able to begin the process of industrialization. Chinese Kongsi began to take on real power, taking into their hands the destinies of other nations and guiding them on the path to prosperity -- or so it comforted many scholars to think of it as they gave thanks that they were scholars and not Scottish factory workers, men and not women, Chinese and not barbarians [1]. Following trade came the empire, bringing order out of chaos, and ordering the world, protecting the sacred across every land (the ones who acknowledged his Celestial Magnificence that is). Not only the kings of Korea and the Vietnamese, but also the kings of Japan, Corboda, Rome, Tenochtitlan, and more than most could name. Chinese steamboats prevailed from the Nile to the North Sea yet did not grow stagnant for the struggle between the trading companies abroad was vicious, so they might establish a monopoly in an area and profit when the bureaucrats came behind to bring it well-ordered government. In this way, the European Peninsula was largely unified under the beneficent rule of the Luoyang-advised Holy Western Kings [Frankish Emperors] and the British Isles brought under the similarly well-guided Scotts.

Yet even as these long-divided realms united, the Imperial Realm, so long united, was dividing. The ruling of Tenochtitlan proved lucrative and attracted many immigrants, who increasingly began to spread to the North and the South. Unfortunately, this process was allowed to continue until those provinces became strong enough to exert significant pressure on the Dynasty. Eventually, conciliation failed and war broke out. The war raged, in phases and combinations, for forty years. When it was over, most of the Kongsi had been forcibly disbanded and liquidated, and the possessions of the Far Eastern Rebels were liberated from their control. The Dynasty was only narrowly saved from total collapse, and many overseas or far-inland provinces had to be trusted to govern themselves with only a tributary ambassador to tie them to China for the foreseeable future [2]. In this climate, the fall of the Holy Western King's Younger Brother to the radicalism that had overtaken so former tributaries, including the vast Srivijaya Complex [3] and its Younger Brother the Pandya [4], could only be greeted with alarm, even if he (like the Caliph in Corboda) no longer remembered to send proper tributaries.

When this new rebellion made war on both the King and the Khan of the Golden Horde (whose fathers had diligently paid tribute to China going back to before industrialization), war was inevitable. The Polish Commune was able to achieve alarming successes but the overwhelming weight of the coalition against it was able to begin to drive it back. But then, in a great catastrophe, the Poles were able to detonate a nuclear weapon, forcing an end to the conflict. Neither side was willing to surrender for reasons of foundational principles, but a war between nuclear powers was too risky to be contemplated. Reluctantly, the standing borders on the ground were surrounded by demilitarized zones, as both sides sat back and waited. Now soldiers from every part of the world gather their, patrolling those grim walls, waiting to see if tomorrow brings the end of the world, as they march all along the frontier.

[1] IIRC this is a paraphrase of something written by an OTL Song scholar. Without the Scottland part obviously.
[2] Many of these ambassadors failed to show proper deference when they arrived or got waylaid or were never appointed. Such are the dismal times.
[3] Mega-Indonesia, including Australia, New Zealand, and Papua New Guinea
[4] Successors to the Chola, from whom the Song had so considerately returned Srivijaya's domains 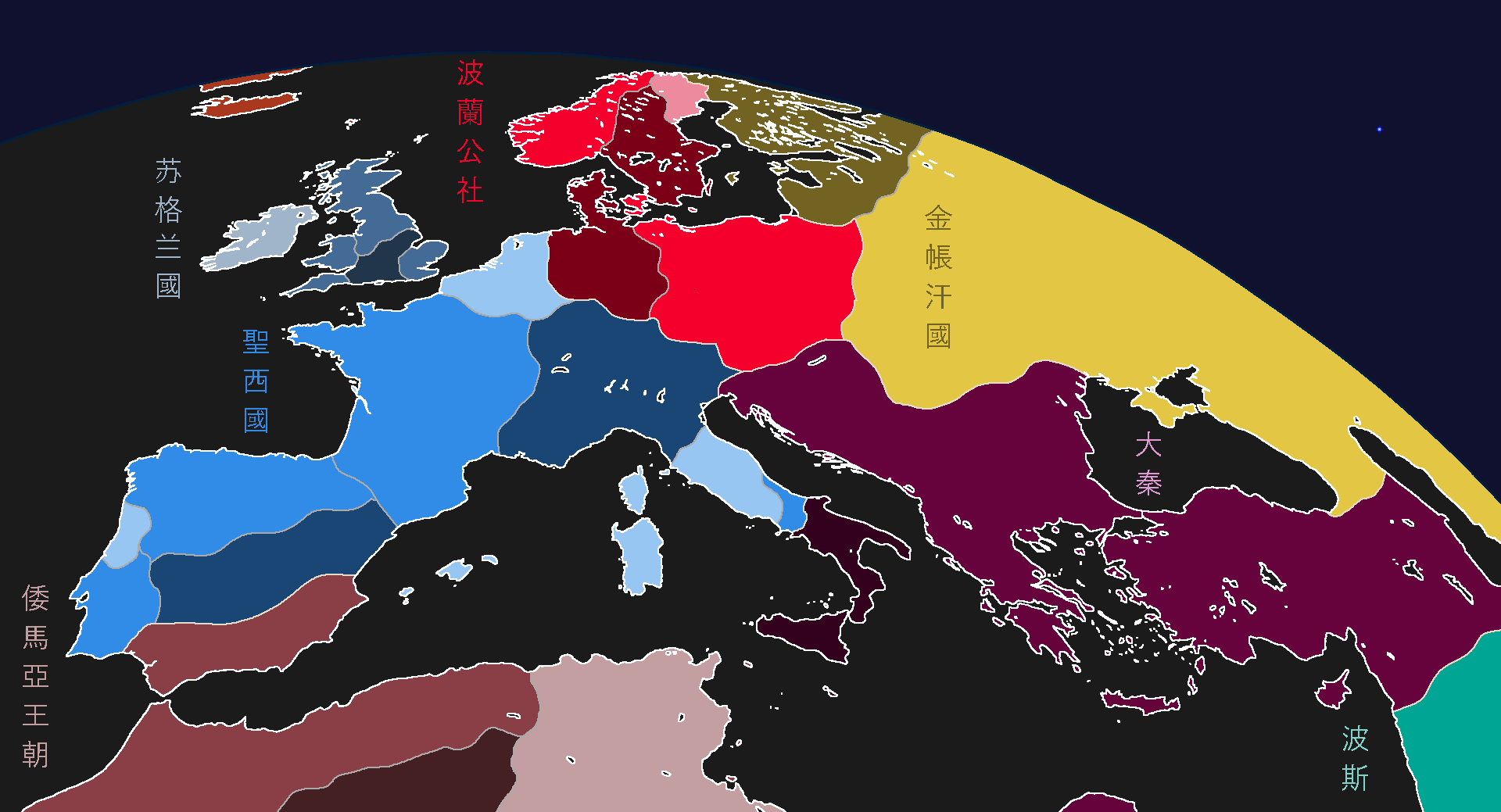 The Demilitarized Zone of Comodoro Rivadavia was established after the Soviet-Argentine War of 1991, the declining Argentine Junta - which had long laid claim to the southern atlantic islands - invaded the Soviet All-Union Territory of Islas dos Estados over a disagreement in interpretation of the 1892 treaty defining the 99-years lease of the island. Effectively Argentina hoped to seize the loosely defined and under-staffed All-Union territory before any of the soviet successor state could claim internationally-recognised sovereignty to it. Instead of precipitating the collapse of the USSR, Gorbachev succesfully claimed the rally-around-the-flag effect, and after an improbable trip of the Admiral Kuznetsov and a much-criticised aerial and submarine bombing campaign over Patagonian infrastructures culminating in the occupation of Tierra Del Fuego, the Argentine Junta was forced to the negociation table, where Staten island was ceded to the USSR to perpetuity and Patagonia was Demilitarized, the soviet victory is often credited as a much needed lifeline for the credibility of the soviet institutions and army (even if declassified documents revealed that British logistical support had been crucial to the soviet war effort) that allowed Gorbachev, and his successor Nazarbeyev to partially reform the USSR and extend its life expectancy even as the lesser SSRs were seceding.

The Comodoro Rivadavia DMZ was established over the territory of the Comodoro Rivadavia Military Zone, that zone had been created at the start of ww2 over the strategic importance of Patagonia's mineral ressources, its proximity with three powerful rivals and as a way to control the region's powerful worker and anarchist movement, which had been emboldened during and after the russian civil war by the escape of russian political prisonners and later the proximity to the USSR; it was quickly extended to encompass the whole of Santa Cruz and Tierra del fuego territories. Through its 50 years long existence, the Military Zone grew from 40,000 to over 700,000 inhabitants, and its capital Comodoro Rivadavia went from an insgnificant town to a city of over 200,000, becoming the second largest city below 40°S after Christchurch.

Staten Island would be invaded once again by Argentina in 2025 during the Environmental Revolution that overthrew the remant of the U.S.S.R.
Last edited: Oct 24, 2022
You must log in or register to reply here.
Top
Share:
Share
Top