Forged in Fire - The world without the Big Three [Reboot] 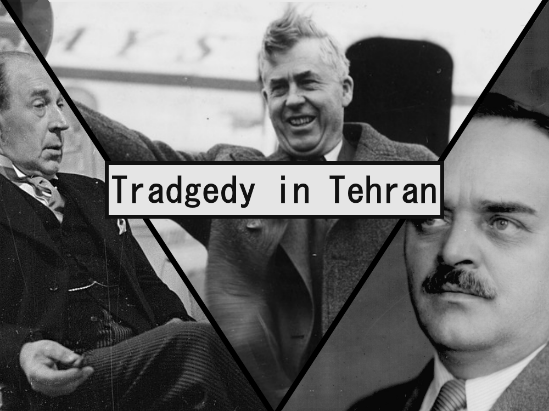 The end of November, 1943, would bring a shock to the world. In a daring attack, German commandos had managed to assassinate the "Big Three" leaders of the Allied powers: Prime Minister Winston Churchill, President Franklin D. Roosevelt and Premier Joseph Stalin. In fact there had been ten deaths in total, the three nations had lost two high-ranking officials each. In addition to the "big three" the Americans had lost Ambassador W. Averell Harriman, the British had lost Foreign Secretary Anthony Eden and the Soviets had lost Foreign Minister Vyacheslav Molotov. The latter two had been considered likely successors to their bosses, and with their countries lacking the clear-cut line of succession of the Americans there would be some struggle before the new leaders could be decided.
In London the war cabinet would assemble. There would be a great deal of difficulty on deciding on an appropriate wartime leader, but the fact that the Germans still occupied the vast majority of the European continent would serve to concentrate minds. Both Deputy Prime Minister Clement Attlee and Minister of Aircraft Production Stafford Cripps were floated as candidates, but it was quickly ascertained that a Labour MP would struggle to lead a government where the vast majority of MPs were Conservative. The Labour Party, however, were not willing to support any Conservative candidate for the position. The natural compromise position, therefore, was for Sir John Anderson to take the reins. He had been in the war cabinet since the outbreak of war; he was an experienced civil servant and had been a governor of Bengal; and his position as an independent MP positioned him as a good compromise choice to lead the country. He would agree to only serve until the first post-war election. Conservative MP Duff Cooper would be tapped as the new Foreign Secretary (and would soon become leader of the Conservatives due to his anti-appeasement credentials) while Conservative MP Oliver Lyttelton was promoted to replace Anderson as Chancellor of the Exchequer due to his business acumen.
In the Soviet Union, it would be a little more difficult. Joseph Stalin had ruled the Soviet Union with an iron fist. He had held the positions of Chairman of the Council of People's Commissars and Chairman of the State Defence Committee, while also being the informal general secretary (the title itself didn't exist in the USSR of 1943, but Stalin had the power associated with it). Molotov had been in charge of foreign affairs and had been seen as a natural successor to Stalin, his death would further complicate the internal Soviet situation. The secretariat at that point was made up of Andrey Andreyev, Andrei Zhdanov, Georgy Malenkov and Alexander Shcherbakov. Shcherbakov had previously worked under Zhdanov and would fall into line, while Zhdanov cut a deal with Andreyev who had worried about his position being supplanted by rising stars such as Malenkov. This allowed him to take the unofficial position of general secretary. In return for support Zhdanov would work with Malenkov to get him appointed to chair the Council of People's Commissars, and Andreyev would be appointed to the State Defence Committee. Zhdanov would get his protégé Nikolai Voznesensky appointed to chair the State Defence Committee, and the Malenkov-Voznesensky-Zhdanov triumvirate was born. There was one more issue to take care of, head of the NKVD Lavrentiy Beria. Beria had been heavily involved in the Great Purge, and had gained the enmity of almost the entire Soviet elite. Zhdanov would be able to unite his comrades and purge Beria, smearing him as responsible for Stalin's death as Beria was in charge of security and having him executed, and would get another protégé of his, Alexey Kuznetsov, appointed to replace him. In these few weeks, the future of the USSR was changed forever.
In the United States, things would be much simpler. Vice President Henry Wallace would be sworn in quickly to replace Roosevelt. He had worked closely with Roosevelt with the domestic war effort, and earlier in the year had undertaken a successful trip to South America where he was involved in bringing a number of South American nations into the Allies. Wallace's first move was to call for another conference, as the Soviet security apparatus was no longer trusted the conference would instead take place in New Delhi. The outcome saw an Allied invasion of France scheduled to ease pressure on the Soviets, the Soviets agree to enter the Pacific War following the defeat of Germany and the principle of the division of Germany into occupation zones following the end of the war being agreed on. There would also be discussion on forming a new global organisation to prevent another global conflict from breaking out.
At the beginning of 1944, the tide had turned decisively against the Axis. The Soviets were pushing back the Germans on the Eastern Front, while further east still Japan was running out of steam. In the west, soldiers from all the western Allies gathered in southern England for the largest amphibious invasion in history. Landing on the beaches of Normandy, the multinational force would begin the liberation of France and the Low Countries. The western Allies and the Soviet would invade Germany from both sides, and eventually the Soviets would take Berlin. Adolf Hitler was found having committed suicide, and the war in Europe was over to fanfare across the world. It was not over yet, the Home Islands of Japan were besieged by the Allies and subject to massive amounts of strategic bombing. There would be two factors leading to their unconditional surrender: the Soviet declaration of war and the dropping of two atomic bombs on Hiroshima and Kokura. There would be substantial arguments as to which of these was most responsible, but ultimately it was a moot point. Japan had surrendered, and the war was over. It was time to win the peace...
American Dream 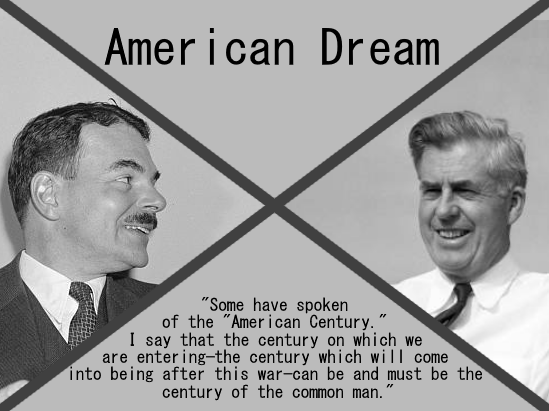 The 1944 election would be fought as the war continued. President Wallace would retain much of Roosevelt's popularity, but the Democrats had been in power for over a decade and Wallace was not the politician his predecessor had been. On top of that, he had enemies within his own party. While he had substantial support within the Democratic base, but party bosses and the south were far less interested in him. The first fight was his nomination, but as the incumbent president he couldn't be quietly bumped off the ticket. The establishment would grit their teeth, and prepare to stand their ground on the second fight. They wanted to pick his running mate, while Wallace wanted his own man on the ticket. Wallace pushed for Senator Claude Pepper, a progressive southerner. The establishment wanted a conservative or moderate to balance the ticket, at one point proposing the Dixiecrat James F. Byrnes. Byrnes' segregationist views would spark ferocious arguments between the establishment and Wallace. Fundamentally Wallace knew he needed the establishment on side to win, and the establishment knew they couldn't feasibly ditch an incumbent who was popular with the base. The compromise would be Senator Harry Truman joining the ticket.
The man gunning for Wallace's job was Thomas E. Dewey. The 42-year-old was ambitious, popular and a rising star. He convicted Lucky Luciano in 1936, had won a plurality on the first ballot at the RNC in 1940 and had been elected governor of New York in 1942 and was forming a new brand of conservativism that was fiscally conservative but accepting of the basic tenants of the New Deal. At the convention he would pick Governor John W. Bricker of Ohio, uniting his conservative and liberal wings with ease. On top of this, Dewey would find himself possessing a strong attack line. Henry Wallace had written a number of letters to a man named Nicholas Roerich, who he referred too as "guru" and these letters had delved into elements such as spiritual healing and visions of Roerich during meditation. To call these letters strange was an understatement, and they would severely damage his popularity when released. To say the least, it looked like Dewey would win.
Harry Truman liked Wallace personally, and respected his service as Secretary of Agriculture. However, he didn't have much love for his more extreme progressivism and had a great deal of loyalty to the Democratic Party. He would serve as a surrogate to Wallace for much of the campaign, with his boss being kept in check by handlers while Truman span his message into one more palatable to the American public. Wallace would appear in public, but only for heavily scripted speeches. While he would gripe about this level of control in private, he needed the establishment to win and was strongly averse to letting the Republicans into the White House.
It was election day, and the results would be interesting to say the least. Wallace had shockingly defeated Dewey by 268 electoral votes to 263, but had lost the popular vote at about 49% to 50%. The race was decided in New Hampshire, where Wallace would scrape through by only 59 votes. Dewey was staggered while Wallace was elated and given a substantial ego boost. At the end of the day, it seemed a large number of American voters were willing to bank on Roosevelt's judgement of Wallace as a good successor. Down ballot however, the Republicans would do tremendously, making a net gain of five seats in the Senate which took them to 42 seats and taking a handful of seats in the house. The age of New Deal supermajorities were over, but the Democrats had some fight left in them yet.
His cabinet would see little turnover until the end of the war, following the onset of peace: disputes over arrangements for post-war Germany would see Henry Morgenthau Jr. replaced by Harry Dexter White at the Treasury Department; Secretary of State Cordell Hull would soon resign in favour of Edward Stettinius due to ailing health; Secretary of War Henry L. Stimson would retire in favour of George C. Marshall; and Wallace would see his friend Claude Pepper appointed as Attorney General. Following the war American troops would move to occupy Germany, Italy and Japan while remaining uninvolved in the European reoccupations of various colonies. He would distance himself from what he condemned as French and Dutch imperialism as they fought colonial wars in Indonesia and Indochina respectively and also would decline to support the British as they fought insurgencies in Greece and Palestine. Domestically he would immediately be faced with the spectre of demobilisation which would haunt the early part of his term. Only time would tell if he would rise to these challenges abroad and at home.
Threadmarks
Reader mode
You must log in or register to reply here.
Top
Share:
Share
Top