The basic premise of this setting is that the Rockall Bank was pushed up above sea level between 25 and 35 million years ago, forming a large and rather mountainous island to the northwest of the British Isles. This idea was originally mine (not that other people thought of it before me), but the setting has since been influenced by a wide variety of ATLs, including the Tarrantry stories and the Tol Galen AU on Shipbucket. 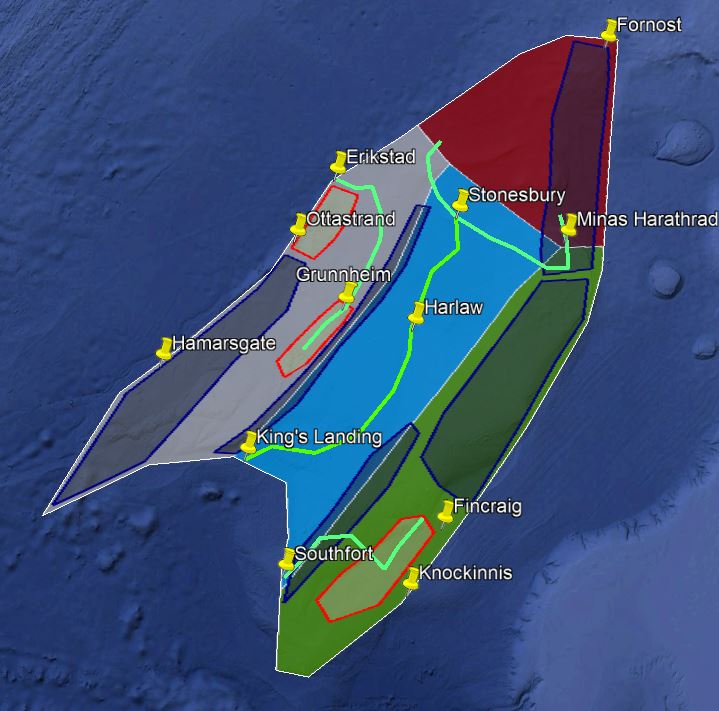 The history of Calendor begins roughly four to five thousand years ago with the arrival of the Sindar from the European mainland. These are essentially Tolkien's Sindar elves transported into the world of Manticore. My version of the elven migration begins in the northern reaches of the Ural Mountains among the predecessors of what are now the Finno-Ugric peoples of Finland and Hungary. The Sindar migrated through what are now Russia, Germany, and the Low Countries before taking to the sea and travelling first to Britain and then Ireland before crossing open Atlantic to the island they named Calendor. The vulgar language of the Sindar, Sindarin, is seen as a descendant of primarily Brythonic Celtic, with a few elements descended from the Finno-Ugric ancient elvish language, which is still used in formal and religious circumstances.

For almost two thousand years, the Sindar tribes ruled Calendor by themselves. Although their written language was limited to runes and their agriculture remained relatively undeveloped, the relatively peaceful coexistence of the Sindar tribes meant that they were able to expend huge amounts of wealth and resources on massive building projects that still dominate some of Calendor's most prominent geographic landmarks. The fairly sudden climatic cooling in the centuries before the Medieval Warm Period weakened the warm-weather agricultural package the Sindar used in the southern regions of Calendor and allowed the incremental colonization of the southeast coast by Goidelic Celts from Ireland beginning in the 4th and 5th centuries. Further outside colonization of Calendor occurred in the 8th and 9th centuries by Anglo-Saxon raiders landing on the southeast coast (the concave part) and Norse Vikings landing on the northwest coast in the 10th and 11th centuries. Over these centuries, the Sindar were pushed further and further north until the island reached a new equilibrium point as shown in the map above.

The Vale of Manticore is the blue region in the center of the island. Historically, settlement was divided at Harlaw between Anglo-Saxons to the north and Anglo-Normans to the south. Extensive English immigration in the 16th and 17th centuries has led to significant cultural assimilation among the existing Vale populations. In modern times, the Middle English and Middle French languages are still found in some small villages and in personal use among the nobility, but modern English is spoken universally elsewhere. The River Anduin runs from King's Landing on the Bight of Manticore through Harlaw to Stonesbury, where the river splits into the River Langwell, which runs up into Glastrymore and then past Minas Harathrad into the Eryd Caran, and the River Greylin, which runs up into the Grayrike.

Glastrymore is the green region on the eastern coast of Calendor. It is inhabited primarily by Goidelic Celts, although there are isolated pockets of Brythonic Celts in the extreme south of the region. Knockinnis and Fincraig are by far the largest cities in the region, while the agricultural heartland of the region is found in the Kenglenn, inland of the two cities. The River Dun runs from the northern reaches of the Kenglenn, across the Eastmarch, and reaches the ocean at the Southfort. Northern Glastrymore is covered by a range of hills known as the Green Hills, visually reminiscent of the mountains of Connacht in Ireland.

The Grayrike is the gray region on the western coast of Calendor. It is inhabited by the Manticoran Norse, a group of Nordic Fennoscandians descended from Viking raiders. It is dominated by two parallel mountain ranges, the Westmarch on the border with the Vale and the Gray Mountains in the south, a range similar to Norway's mountains and fjords but significantly larger. Between the Gray Mountains and the Westmarch is the Grunndale, a large agricultural valley that also serves as the source of the Kingsforce, the large river that flows down from the Grunndale to the Eriksfjord. North of the Gray Mountains is the Langstrand, a large coastal plain bracketed by the city of Ottastrand to the south and the large Eriksfjord to the north, with the Norse seat of government at Erikstad on the Eriksfjord.

Carandor, the Red Realm in northern Calendor, is the modern name for the realm of the Red King in Fornost. During the period of Sindarin domination of Calendor, Fornost and the nobles of the Eryd Caran, the northern mountain range that is a significantly larger extension of the Green Hills of northern Glastrymore, were subordinates of the Sindar high king at Tol Galen. The collapse of the Sindar kingdom, combined with Gaelic and Saxon invasions, has left the Manticoran Sindar concentrated in the north of the island. Although the Sindar claim that the name of the Red Mountains comes from the orange glacial deposits that are common across the valleys of the range, the northern Gaels say that they coined the name, after the blood spilled by the Sindar in dozens of attempts by the Norse, Saxons, and Gaels to attack the Sindar.

There are a total of twelve cities, all of which exercise control over their metropolitan regions. One city, King's Landing, is administered by the Crown as the personal holding of the King. Five cities, Erikstad in the Grayrike, Stonesbury and the Southfort in the Vale, Knockinnis in Glastrymore, and Fornost in Carandor, are ducal or royal cities, governed by the representatives of the five non-English ethnic groups, respectively the Norse, Saxons, Normans, Gaels, and Sindar. The dukes are the Stones of Stonesbury, the Martins of the Southfort, and the Erainn Dukes of Knockinnis. The King in the Grayrike and the Red King of the Sindar rule the cities of Erikstad and Fornost, respectively. The remaining six cities are governed by democratically elected city council executive committees who swear allegiance, not fealty, to the Crown. Civic organization is generally coterminous with Catholic ecclesiastical jurisdictions, so each of the twelve independent cities is also coterminous with a metropolitan archdiocese supervising individual dioceses in the nearby noble territories, which are collectively known as dioceses when referring to territories of multiple ethnicities. The smallest unit of civic organization is the parish, a grouping of up to 2,000 people attending a single parish church. These units have their own elected lay councils separate from the Church hierarchy. In the diocese, these parishes also elect an individual representative to go to the diocesan council that advises the ruling noble. In the cities, these representatives come from wards of between 6 and 12 parishes to keep the number of representatives to a reasonable level. The representatives do not have collective legislative powers but can vote to send protests of city council or noble actions to the Crown.

In the diocese, settlements are split between towns and villages, distinguished by the presence of a parish church. The system is somewhat similar to the town-village municipal system in New York State, where towns are geographic subdivisions of counties and villages are incorporated settlements within the towns. In Manticore, the parish takes the function of the New York State town for a population while towns and villages are the incorporated settlements; there is one town in each parish that is home to the parish church, while villages are other settlements. Generally speaking, towns are also walled or otherwise fortified while villages are not. Most towns started life as a market or church while villages generally formed around inns or crossroads. Throughout the 18th and 19th century, standard practice for growing rural parishes was to establish missions in villages and then elevate those missions to parish status when the surrounding population was large enough. In general, only half of the population of the average parish attends Mass at the parish church. The Industrial Revolution in Manticore triggered the development of extra-urban settlements larger than a single parish, so the cities' ward structure was exported to provide for representation of the larger town as a whole. Additionally, diocesan nobles generally appointed a knightly family to administer the wards. Outside of the cities, a ward can have as few as two parishes. Relatively tight control was exercised over the movement of labor throughout the 19th and early 20th centuries, so cities grew very quickly as nobles were reluctant to release their labor force to work in the territories of competing dioceses compared to the higher-level cities. Therefore, there are very few settlements with populations between the smallest cities (Ottastrand at 500,000) and diocese capitals with less than a hundred thousand inhabitants. This distribution is not unprecedented in the real world: the Canadian providence of Alberta has the cities of Calgary and Edmonton with populations of 1.2 and 0.9 million, respectively, and the 3rd most populous city in the province is Red Deer, with a population of 100,000.

The average size of a diocese capital is roughly 50,000, accounting for about 10 million people, while other multi-parish ward township account for another 5 million and single-parish townships account for 5 million. The population of the incorporated villages and unincorporated areas is roughly 20 million, equivalent to an urbanization rate of 63%. The population of the dioceses, roughly 40 million, is split up into 20,000 parishes. The diocesan capitals account for 5,000 parishes, the ward townships for 2,500, and the towns and parishes for the remaining 12,500. The average ward township includes four parishes with a population of 8,000, and there are roughly three of these per diocese.