Peoples’ Republic of China overtakes Japan as the second largest economy behind the USA.

China’s economy reaches 40% the size of the USAs; scholars begin to describe the period as the Second Cold War with Sino-American rivalry increasing as the Chinese government ordered the expansion of the relatively small navy to compete with the US navy in the Pacific.

The Russian government accused Ukraine of tapping oil supplies through to Central Europe. Russia threatens war if Ukraine didn’t respond by March 1st. The EU and India intervene as neutral powers to negotiate peace. The delegates of 8 nations (India, Russia, Ukraine, the UK, France, Germany, Poland and Italy) met at Delhi in March.

The EU though not directly involved in the oil and territorial dispute between Ukraine and Russia, but was affected by the Russians terminating oil supplies to Central and Eastern Europe. The government in Brussels agreed the EU was willing to cede the Crimea to Russia and for Ukraine to pay reparations, but wanted Russian influence over Belarus to cease and EU troops to be stationed in Ukraine and Belarus as enforcers of the peace treaty and oil supplies to Europe from Russia to be secured.

Ukraine was denying any involvement in tapping Russian oil pipelines to Central Europe and therefore wanted Russia to pay reparations in the form of oil supplies and money and the recognition of Ukraine’s borders.

The Russian minority in Eastern Ukraine was considerable and Moscow accused Ukraine of maltreating them, demanding Ukraine east of the Dnepr and Crimea to be annexed to Russia and also the final reincorporation of Belarus into the federation. Furthermore, Moscow wanted reparations to be paid to Russia by Ukraine and the EU.

Wanted Ukraine to lose small territories to the Russian Federation, reparations to be paid by Kiev, but Russian influence over Belarus to be terminated.

Following deliberation between the delegates, a final plan was proposed and agreed upon by all ten nations represented at Delhi. See map below: 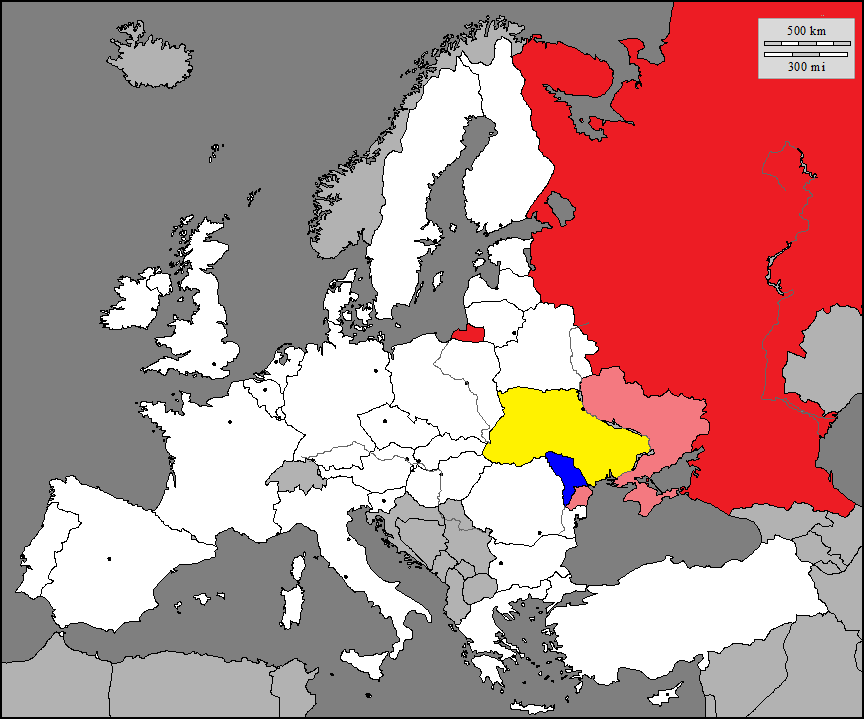 Following the plebiscite, Ukraine retained most of its pre-treaty territory, however Crimea voted majority to join the Russian federation. See map below 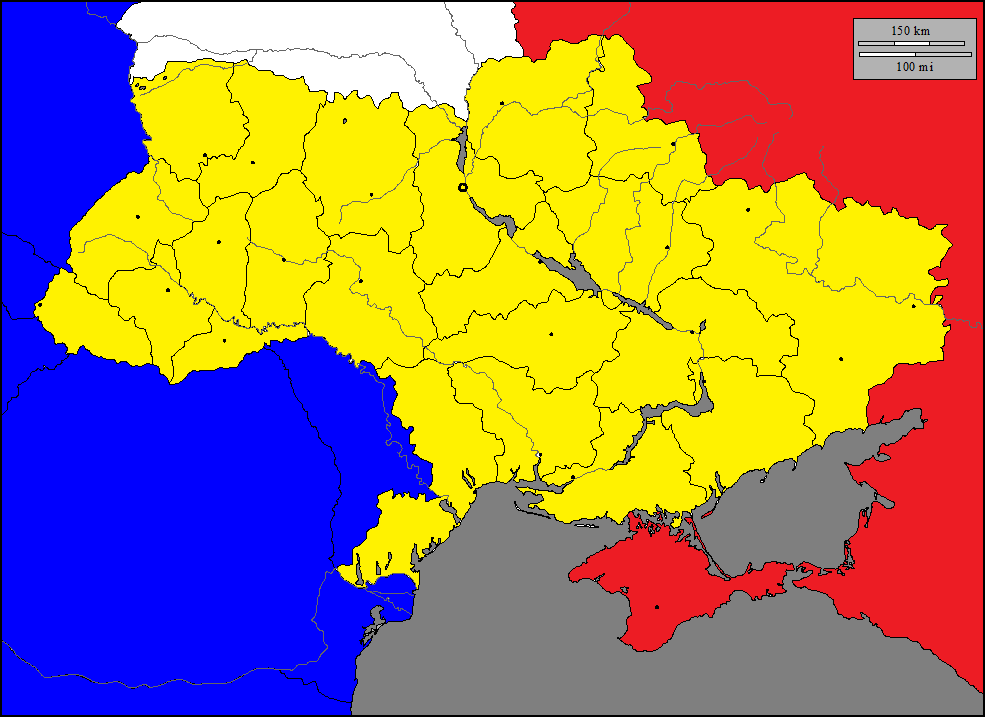 The EU government in Brussels put forward plans for complete state integration into a supranational European state to rival and neutralise Russia hegemony and influence over Europe. Furthermore, Brussels proposed the sixth phase of EU enlargement, whereby Russian influence in Central Europe would be quelled and blocked by the admission of the remaining European states other than Russia to the EU.

The 6th phase of EU enlargement commenced with Croatia, Macedonia and Turkey finally joining the EU in September 2020. In 2022 Montenegro and Albania were admitted, whilst Bosnia and Kosovo submitted applications. Ukraine entered the EU in 2024; this was the first breach of the treaty of Delhi in 2013, whereby Ukraine was to remain neutral and accept her new borders with Russia; Indian and Russia protests were ignored. The Caucasian states had all already submitted applications; of the three countries the EU regarded Armenia as the most stable, therefore Armenia joined the EU in 2025 whilst the other two were promised acceptance in the next phase of enlargement. 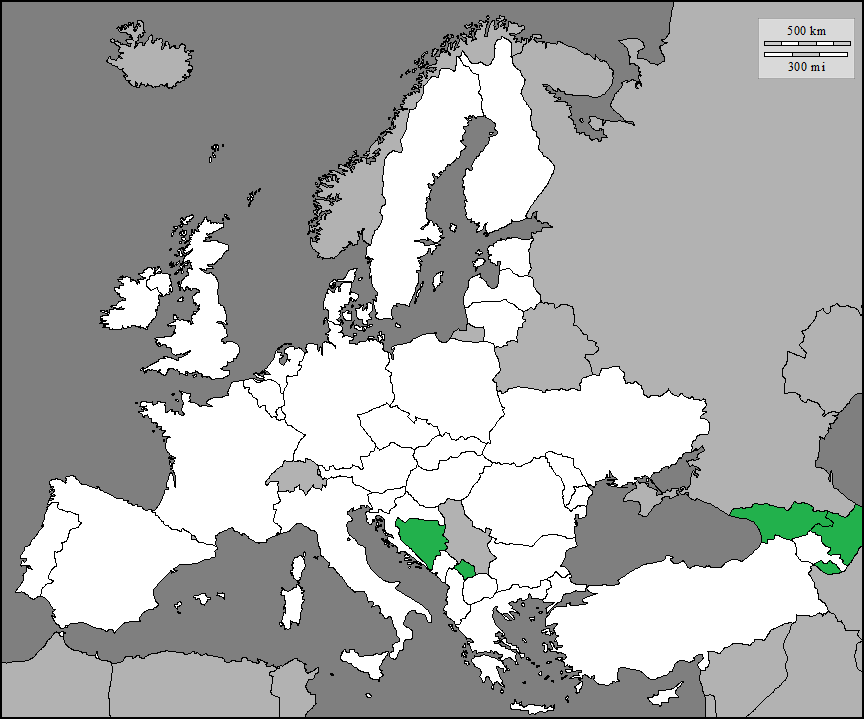 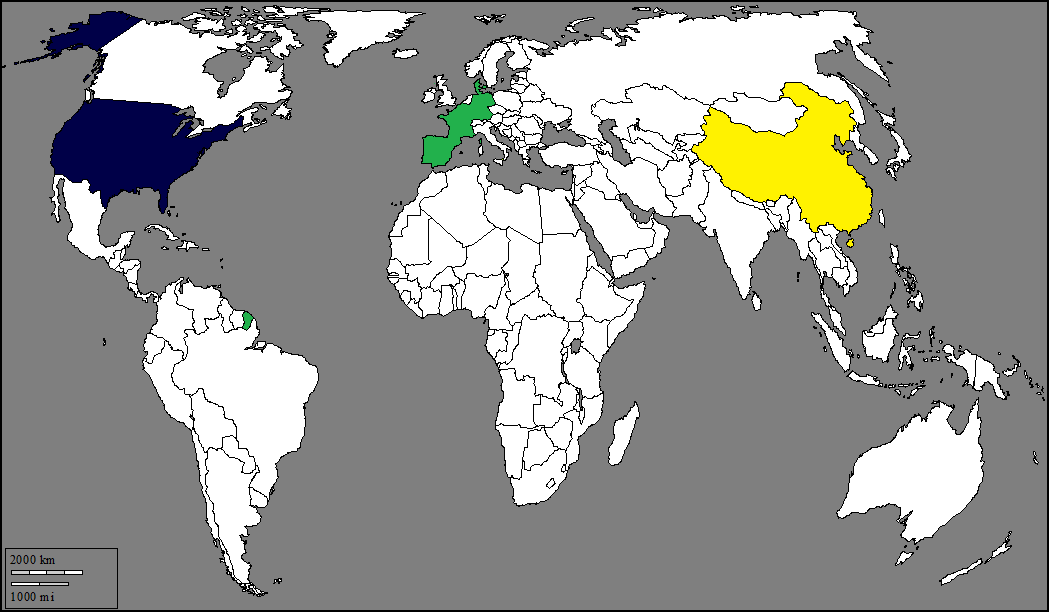 Belarus, North Korea, Vietnam and Laos joined the Shanghai Cooperation Organisation. Also China’s economy overtook the USA as the world largest economy, nevertheless the EU as a loose federation still retained a larger overall economy than China. Also in this year, Brussels, Paris and Berlin announced their joint plans for a united Western European state (which would rival the USA and China economically, in military strength and political influence).

The 1st phase of European unification or integration began with sub-phase 1.1; whereby Germany, France and Belgium merged their governments and armies plus the complete opening of their borders. The three agreed for the capital to be at Brussels and provincial capitals to be at Paris and Berlin. Originally the new state was called the ‘Belgian-French-German Union’ but after deliberation at Brussels the ‘Western European Commonwealth’ succeeded the Belgian-French-German union.

Phase 1.3 of European integration was completed with admission of Portugal and Spain to the WEC, which now had an economy of 28 trillion US Dollars (now the largest in the world). 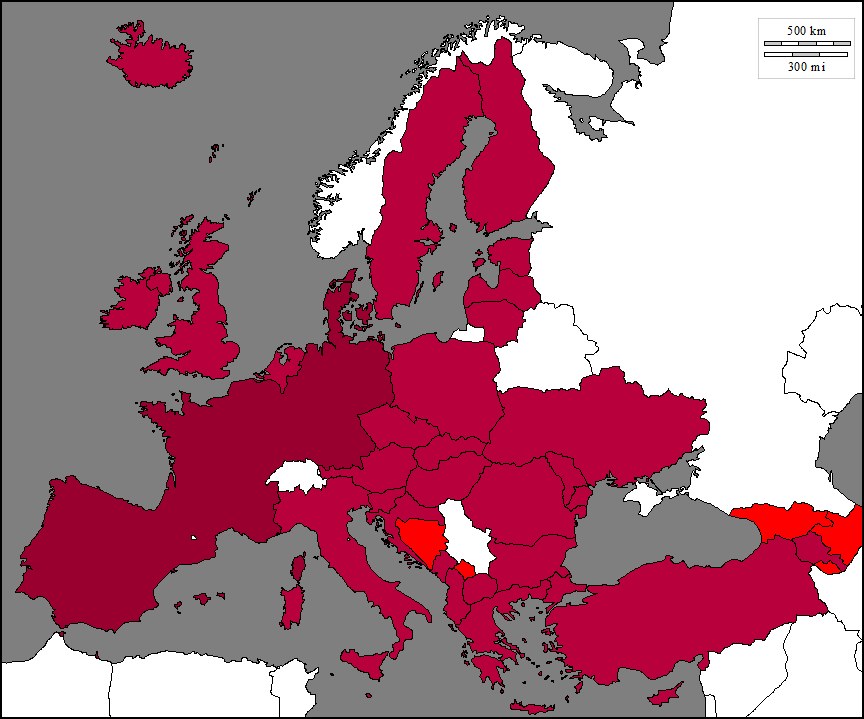 The next section of the timeline will be explained through maps and small, detailed captions and keys. 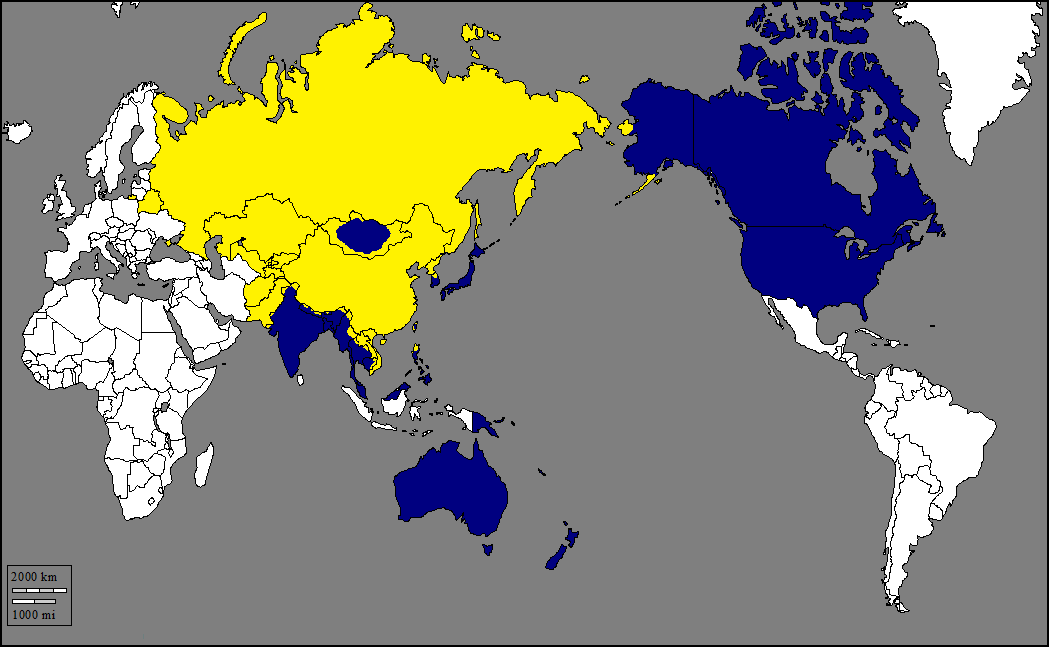 Chinese troops easily overrun most of Mongolia and also land in Taiwan. Chinese, Laos and Vietnamese troops invade Cambodia, Thailand, India and Burma. Pakistan calls for Chinese support when the Indians blocked the Pakistani advance. North Korea made little progress in the south, whilst Chinese and Russian troops invaded Alaska. 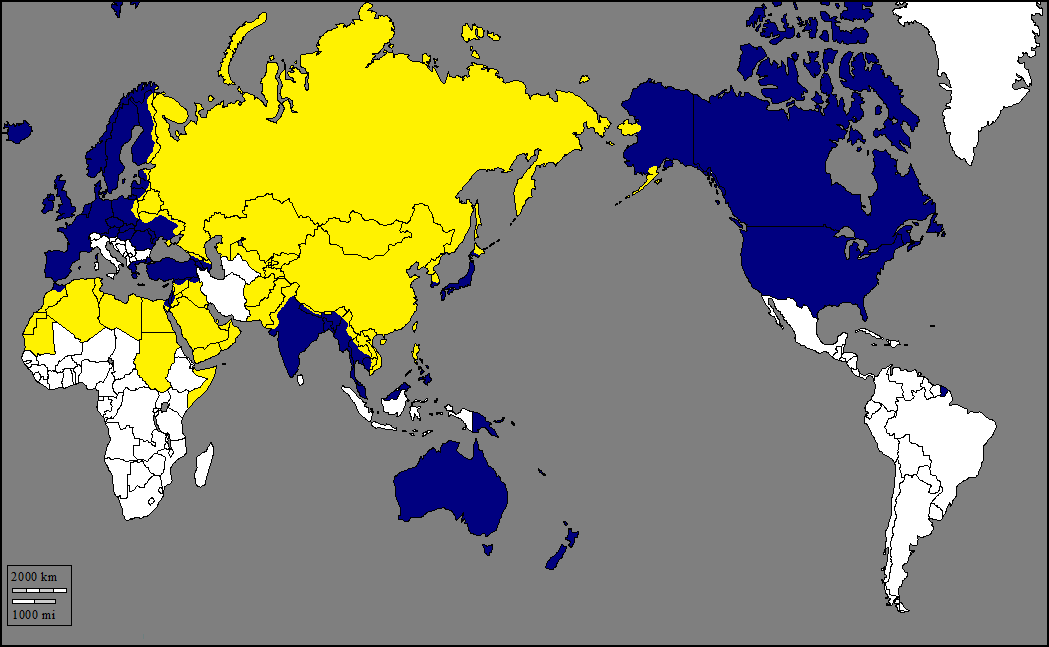 Russia, Belarus and Kazakhstan invaded Ukraine; the EU and WEC responded with declarations of war against Russia, China and the SCO. Russian tanks overwhelmed much of Eastern Ukraine and Poland, the Baltic States and the Finnish border. Millions of men in the WEC were recruited after a successful promotion to expand the army to defeat Russia; by the end of March the WEC had 30 million troops ready for combat (of these only 4 million were at the front). Palestinian revolts broke out in Jerusalem; the Arab League promptly declared war on Israel and the USA followed shortly by the EU and WEC declaring war on the Arab League. Israel invaded her neighbours taking most of the Sinai Peninsula whilst the WEC invaded Morocco from the former Spanish enclaves in Northern Africa. Notable advances were made by the SCO in the east with the invasion of Hokkaido (Northern Japan). 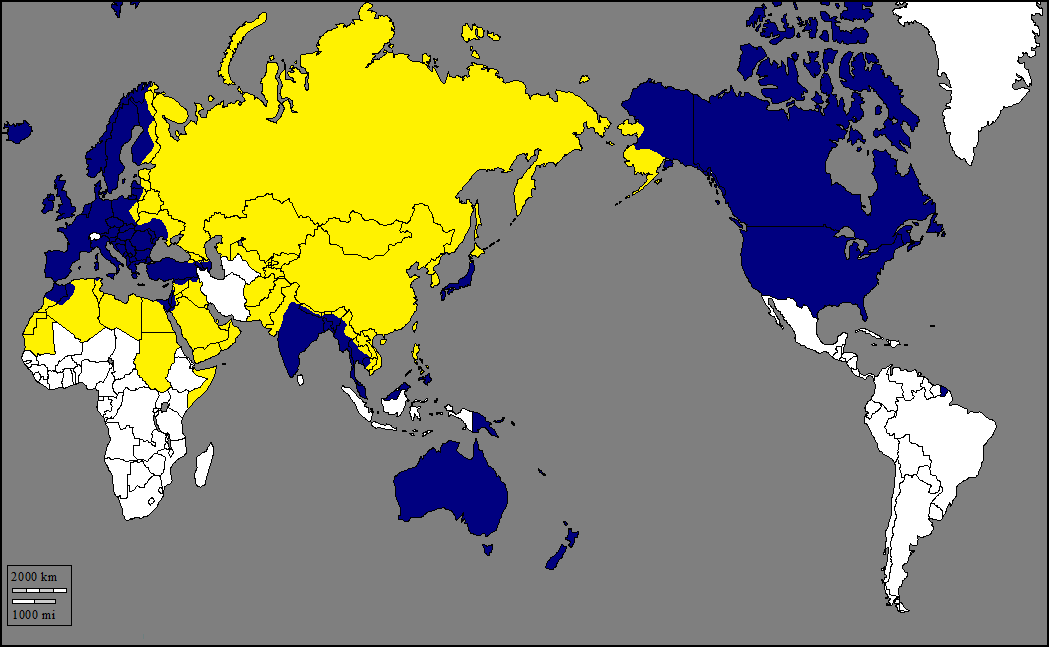 Sino-Pakistani troops made progress in India, but their offensive through Nepal was halted mainly by the mountainous relief. South Korea and Hokkaido fell, whilst Taiwanese or Nationalist Chinese troops held out in the far corners of the island. Progress was made in Alaska, whilst the northern most island of the Philippines fell under complete Chinese occupation. In Europe the Russians made progress towards enveloping the Ukrainian army in Kiev. In Africa WEC troops invaded Syria and Iraq from Turkey and continued their advance from Morocco further southwards and into Algeria; furthermore Italy emerged from neutrality (after the rejection of union with the WEC) invading Tunisia. Israel conquered the Sinai and continued on all fronts. 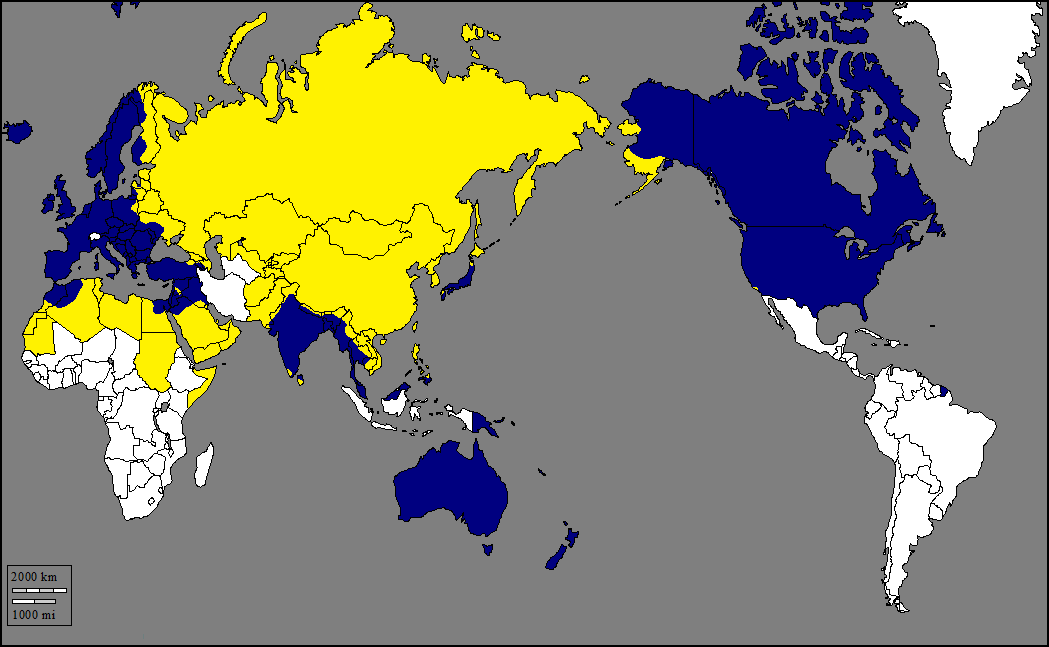 In Europe Riga was isolated by land after the Russians conquered most of Latvia. Arab troops were encircled in Syria and the WEC was making progress, however the Italians retreated from Tunis back to Sicily when the Tunisian army almost destroyed the Italian bridgehead. In an attempt to encircle India by sea and land, Chinese troops invaded Southern India and Sri Lanka. The Americans and Canadians counterattacked in Alaska but failed to clear the mainland of enemy troops. Back in Europe the huge Sino-Russian offensive, which aimed at destroying the Euroarmy and WEC armies, captured Warsaw. The remaining 21 million inactive WEC troops were stationed on the border with Poland, awaiting the Chinese troops spearheading the largest military offensive in human history. 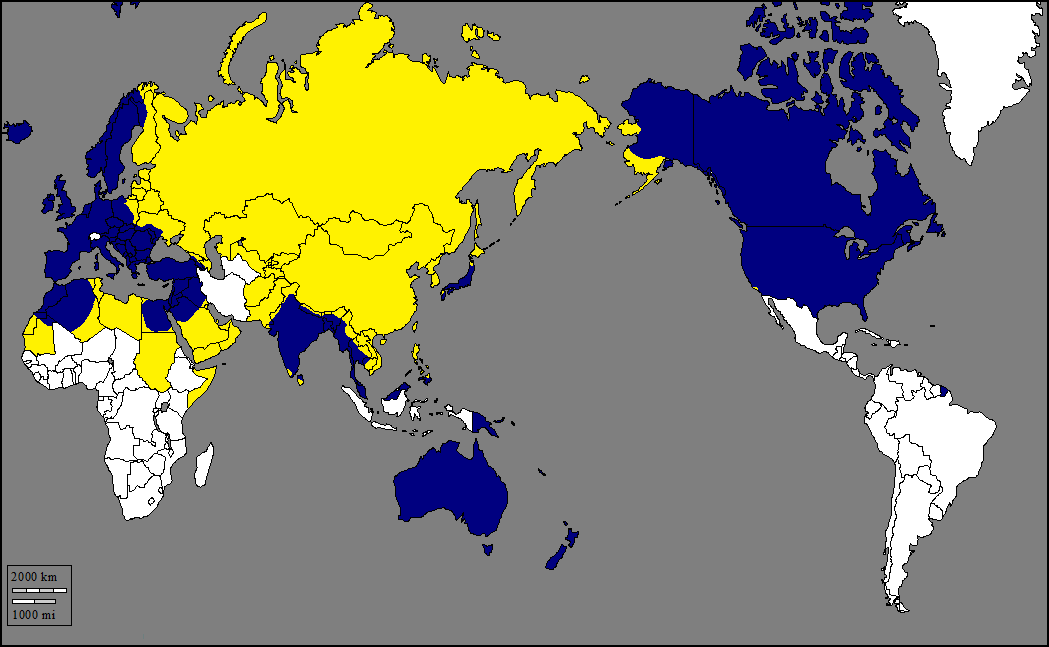 Israel occupied most of Egypt, whilst WEC troops penetrated deep into Saudi Arabia and Algeria (whilst Morocco capitulated). The Sino-Russian armies continued to occupy Poland further westwards, Finland and the Baltic States. In Asia the Indians counterattacked and the front in Japan and Alaska stabilised, however Taiwan finally (ending the Chinese Civil War) and the Philippines was almost completely conquered by China. 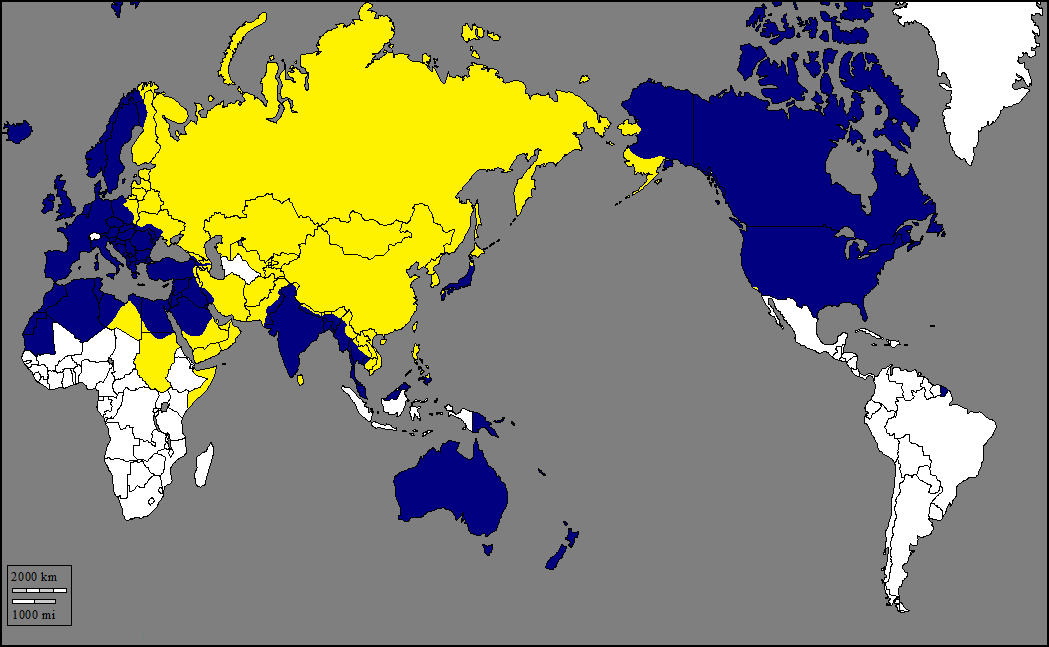 China withdrew military from Pakistan; consequently the Indians invaded Pakistan making great progress. The Arab League was suffering greatly as Israel and the WEC advanced deeper into Arabia itself and almost all the members of the League had some form of European or Israeli military presence within the country. Nevertheless, the war was unravelling well for the SCO and allies overall. The offensive in Europe was halted as the winter drew in. Reinforcements were brought in on both sides of the front. Elsewhere, the fronts stabilised, however the Indians destroyed the Chinese bridgehead in Southern India but Sri Lanka was completely conquered by China.