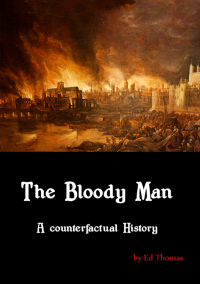 The mid 17th Century, concentrating on an alternate direction in life for Oliver Cromwell.

The title refers to the Book of Samuel in the Bible; “The LORD hath returned upon thee all the blood of the house of Saul, in whose stead thou hast reigned; and the LORD hath delivered the kingdom into the hand of Absalom thy son: and, behold, thou art taken in thy mischief, because thou art a bloody man.”

In 1633, a drunken Oliver Cromwell looks up when IOTL he didn't, sees what he assumes is a sign from God, and as a result elects to emigrate to the colonies in New England. As the butterflies mount in the New World, back in England the Civil War goes rather differently without him, until eventually, all hell breaks loose…