No Terror of Justinian - Glory Instead!

A Byzantine timeline by Sargon. It saw great success in the 2008 Turtledove Awards - winning the Turtledove for the best Dark Ages and Medieval Timeline, as well as the superlative award for best overall timeline.

The full title of the TL is actually: The Roman Emperor Who Lost His Nose: A timeline of Justinian II - The Magnificent Rhinotmetos.

It can be read on the forum here.

The TL is currently paused whilst the author finds time to finish up the next part.

The TL looks at a little known period of Eastern Roman (Byzantine) History during the latter part of OTL's Heraclian Dynasty (610 - 711), in particular the reign of Justinian II. The period is so obscure, that sources for this period are hard to come by, and of those that are, many have not been translated into English. This of course has made researching it particularly difficult for the author, who has had to improve his medieval Greek as a result, and spend a fair amount of time and money getting hold of the various texts useful for the era. Matters are not helped by the fact that there is only one full length book thus far published in English about Justinian II, as well as a single work of historical fiction by Harry Turtledove based upon the Emperor's life, incidentally reckoned amongst the best of his novels (it ought to be as his degree was in Byzantine Studies!).

The POD concerns itself with a change of direction and actions of Justinian II. Historically, although he was a gifted ruler in many ways such as militarily, administratively, and in the religious sphere for example, he suffered from such stubbornness, divine belief, paranoia and a thirst for revenge from losing his throne in 695 that his second reign ended up with him being deposed for a second time and the ousting of his dynasty from power for good. On his return to Constantinople in 704, it is said in OTL the little fishing boat commandeered by himself and his small band of followers carrying him across the Black Sea and back to his lands was caught in a storm, and was in danger of sinking. One of his companions, certain that the boat would sink pleaded with the Emperor to promise God that Justinian would have mercy on his enemies if God saved them from the storm. Justinian entirely characteristicly shook his fist at the heavens and declared, “If I spare even one of them, may God drown me now!”. The storm disappeared within a short while, and the Emperor saw it as divine sanction for him to mete out revenge to all those he thought had wronged him when he got his throne back, leading to his deposition later on.

In this TL, the POD happens when the Emperor is thrown overboard by a particularly nasty wave, and given a good dunking for his trouble. For good measure, he is made unconscious for a short while before being hauled to safety by his followers, where the one who uttered the warning, Myakes, admonishes the Emperor for challenging God, but remarks that God has given the Emperor a chance to redeem himself. Justinian is recorded as being a very pious man, the first Emperor in fact to put the image of Christ upon Roman coins in OTL. Thus, working on this belief in God, the TL follows what happens now that he takes on-board what happened to him and God's desire that he not seek such revenge. Without the paranoia and desire for revenge clouding his judgement as it did OTL, he is able to utilise his undoubted skills for the better, and change history in quite a significant way as a result…

Part I: Hope for the Future - The Son of a Successful Emperor
Part II: Success and Arrogance - His First Reign
Part III: Long Exile & The Struggle Back - Restoration, Triumph and Reflection
Part IV: A Change in Direction - Mercy & Joy
Part V: Building the Future
Part VI: Victory, Trouble and Gifts
Part VII: Crisis in Italy
Part VIII: The Reign in Spain
Part IX: Into the Fire
Part X: The Mists of Toledo
Part XI: The Wrath of Hercules
Part XII: Kings, Knights, Bishops and Pawns
Part XIII: (underway and expected to be posted in 2021)

All are historical unless marked with an *:

Empire of the Romans

668-681 Tiberius (II) [III] (both co-emperors, later deposed and exiled by their brother Constantine)

661 Hasan ibn Ali Was considered by some Muslims at that time as a caliph, for 6 months

Kingdom of the Visigoths

Khanate of the Bulgars

c680-? Kuber (after fall of Great Bulgaria, led part of the Bulgars in migration ultimately to Syrmia)

Khaganate of the Khazars

Popes of the Holy See of St. Peter in Rome

Kingdom of the Lombards 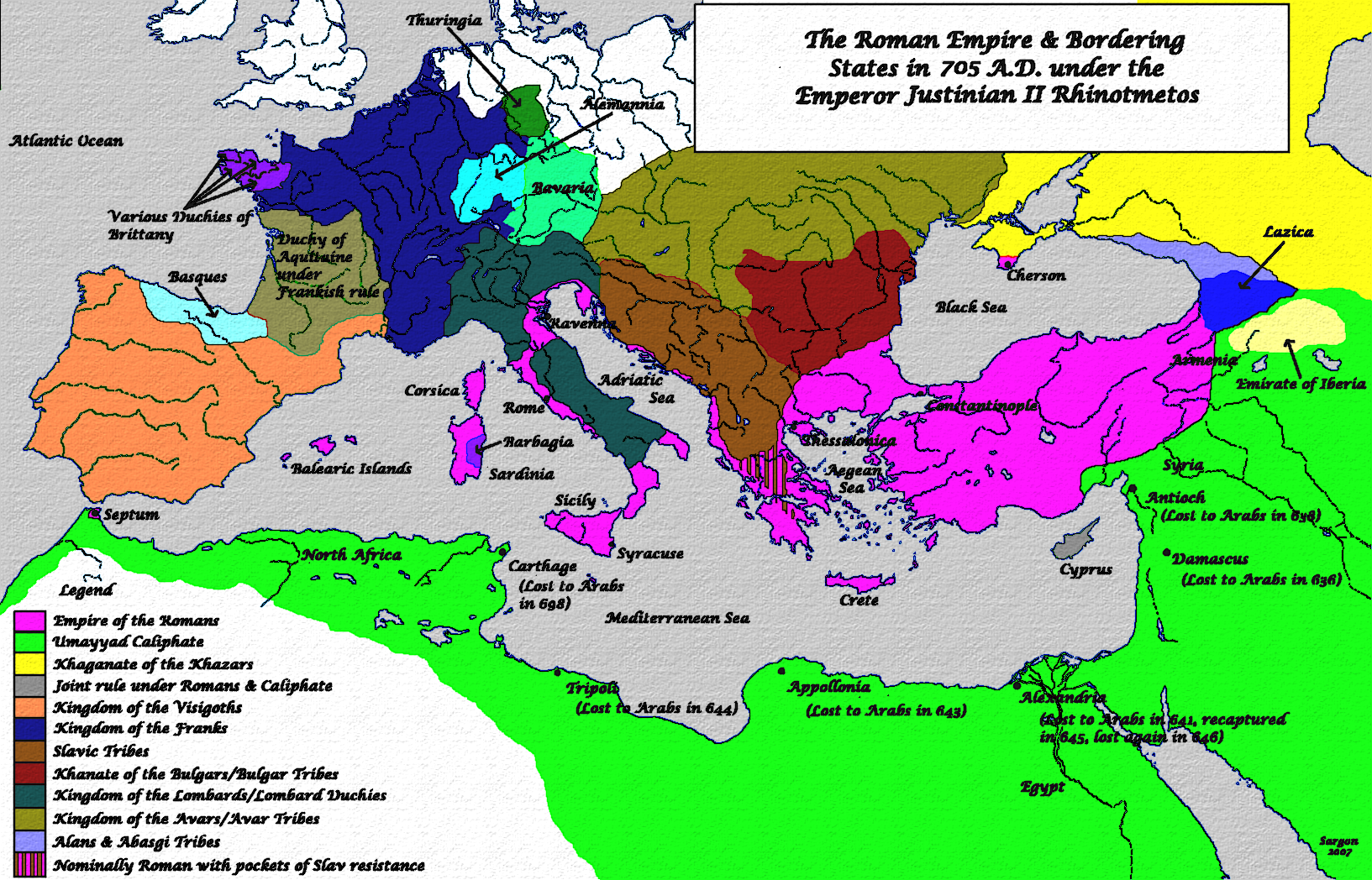 The Campaigns in Thessaly: 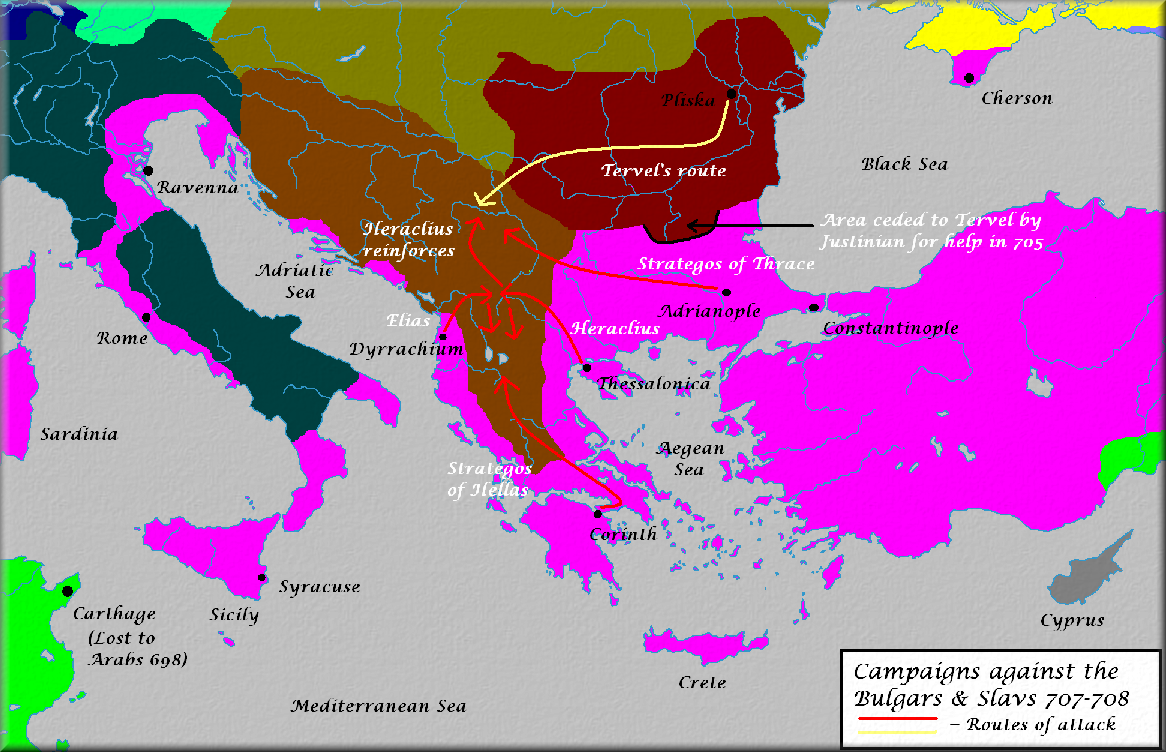