First War of the Polish Succession

A war in Look to the West that went essentially the same as OTL's first (and only) War of the Polish Succession. 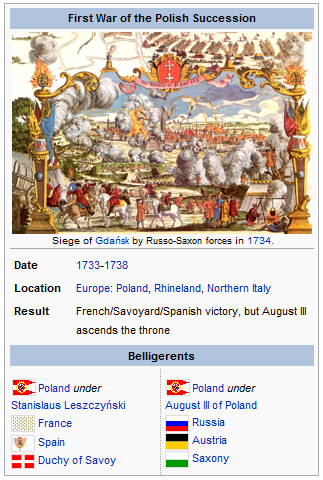 In a strange paradox, the Franco-Spanish side of the conflict, backing Stanislaus Leszczyński to be elected king of the Polish-Lithuanian Commonwealth, won the war - but nonetheless the Austro-Russian side's candidate, Elector August of Saxony, ascended the throne. Leszczyński was given the Duchy of Lorraine instead, in the knowledge that he would die childless and Lorraine would be amalgamated into the French crown. Other territorial changes included the loss of Spanish Parma and Tuscany to Austria, but Spain being compensated with Naples and Sicily. These changes would soon be made obsolete by the Second War of Supremacy.

Proceed to Second War of Supremacy

Main Index of Look to the West Wars