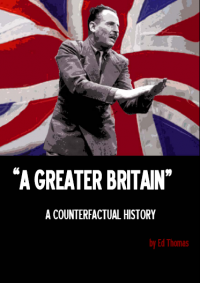 In the October 1924 General Election, Oswald Mosley beats Neville Chamberlain in Birmigham Ladywood by 53 votes; OTL Chamberlain won by 77 and it took Mosley until 1926 to get back into Parliament.

The Timeline follows the political career of Oswald Mosley from his election as a Labour MP in 1924 all the way to his eventual political downfall. Mosley becomes Labour leader in 1931 and is elected Prime Minister the following year; his administration has radically different policies to that of the National Government and consequently the entire course of history is different from the mid-1930s onwards. Because of Mosley's foreign policy, war breaks out in 1938 over the attempted incorporation of Austria into Germany; the resulting war sweeps across Central Europe and ends in late 1938 with the assassination of Adolf Hitler by the Wehrmacht. After the war, Mosley wins a third term in office, but his leadership is increasingly questioned by the Labour Party and he is forced to resign in 1940.