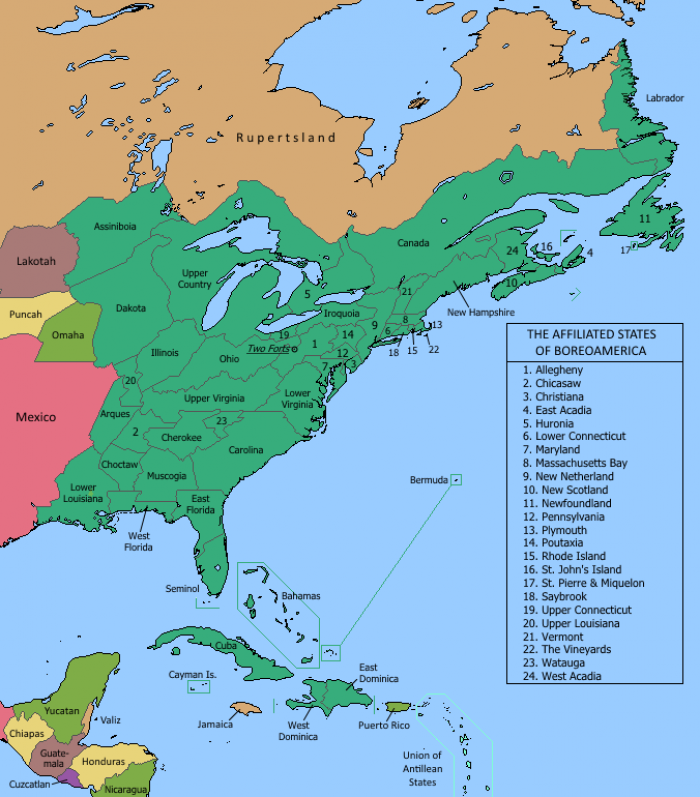 The Affiliated States of Boreoamerica (ASB) is a collection of fifty states, all relatively self-governing, with the federal government being an “overseer” and not a “normal” government in the OTL sense of the word. However, it had more strength in the past and at times acted like a national government.

The ASB arose gradually from the colonial alliance structure. The Indians in the modern states of Illinois, Huronia, and the Upper Country were tied to New France as the Children of Onontio, while Iroquoia, New Netherland, and many of the peoples of Poutaxia (the Delaware) were bound in the Covenant Chain. The system of alliances gradually gave rise to some broader permanent institutions for mediating disputes and settling land claims. At some point, these shared institutions came to be regarded as different bodies of a single confederation. It's vaguely like the European Institutions in Our TimeLine.

The ASB is a confusing patchwork of states with very different systems of government. To the point where Southern New England has kept the monarchy while most other colonies have not, while Maryland continues to recognize the Jacobite claimant. Massachusetts and most other ex-English colonies have presidential systems, while southern New England has adopted a Westminster-style parliament. The states that evolved from Native chiefdoms and Métis alliances have their own distinct political traditions to add still more variety.

The ASB as a whole is governed by a Grand Council of State, which is chosen by Parliament.