The World of Mañana : A Grand Business Opportunity

A story of the World of Mañana by Geekhis khan. 1) 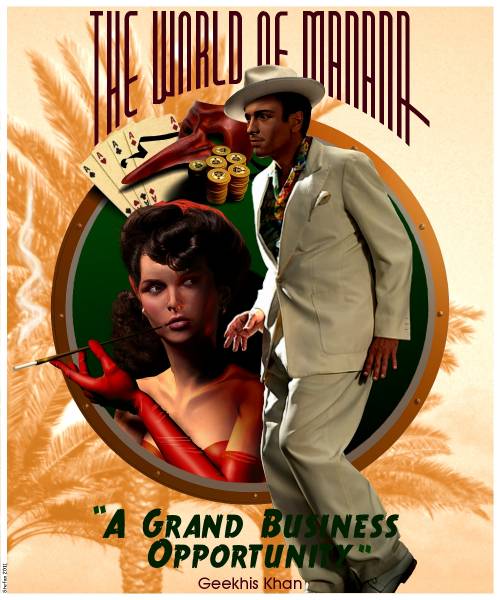 Artwork courtesy of Stefan; posted by artist's permission; rights retained by the artist

He swims through the crowd like a shark, slipping between the flowing bodies and riding the currents of the revellers' drunken shoves. Loud laughs and screams share the air with joyous music in a cacophony of horns and whistles. Faces are concealed beneath masks; the scents of cheap booze and anonymous sex mingle like random partners. He loathes these drunken fools, these overworked and understimulated masses making a last grasp at empty sin before the penitent desolation of Lent. His smile is jovial, however. Only his eyes hold the sneer of violent contempt he carries in his heart.

A Scaramouche strolls past him, strumming a lute. He smiles his shark's grin at this lone troubadore, amused at least to see at least someone playing a part other than Harlequin's tonight. He adjusts his white hat, pulling it low over his eyes. It matches his white cotton suit, complements the black diagonally striped tie. He slips brazenly through the crowd, a modern day Brighella amidst a sea of Poirots in Harlequins' clothing. Perhaps, he thinks, I should have worn the Harlequin mask myself, for surely it is Columbina2) who awaits me.

He slips through the human currents, in and out of the light of lamps, over ancient cobbles, past once-glorious walls built to hold back heathen hordes, yet now stained from a thousand drunken urinations. The door he seeks is small, unobtrusive. When he finds it and knocks two quick raps a slot opens, revealling a tight, thin-lipped mouth. “May I be of service?” the mouth says. The words are Burgundian, but the accent Occitani.

He smiles his shark's grin and slips a card through to the slot to the mouth. Without a word the slot slams shut, a deadbolt clunks back, and the heavy door opens silently. He slips through the doorway and out of the cacophony of the streets. The door swings quietly shut behind him, nesting in its frame like an airlock. The soft lights and soft chamber music immediately reveals this small sanctuary to be a place of refinement and sophistication, an island of Class amid the lowly sea of Common beyond. Silk curtains part. A large Baroque ballroom is revealed. Plush carpet, art-clad walls, intimate tables, a small tastefully gilded bar… but mostly tables. Large, wooden tables topped with green felt, scattered with cards and chips, dice and drinks. Here and there a roulette wheel or Fortuna's wheel. He grabs a champagne flute from a passing waiter's tray and slips now into this slower, more refined cove.

He spots her. Impossible to miss even in this crowd. Her feral femininity is palpable from afar. Long, thin, softly curving body sheathed in tight red silk. Raven hair cascading down her soft pale shoulders in long locks, straight save for the slight curls at the ends. Nose aquiline but straight. Eyes dark and raptor-like. Lips full, red, parting slightly now to allow in the tip of a long gold cigarette holder, parting slightly again to remove the holder and exhale a long stream of blue smoke which spirals to the ceiling, curling around the stained glass shade of the table light above. She motions sensuously to the croupier with a white gloved hand. Another card is passed on the pallet.

“Signoraneta,” he says, bowing to kiss her gloved fingers.

“Baccarat,” says the croupier, turning over his own cards and paying out the bets. Without turning her face from Marcolo's she retreives her winnings. The croupier deals out the next card, which she absentmindedly picks up. An eight. She smiles and puts it face down, signalling to hold.

“I assume Il Dottore is here?”

She laughs. “I assume you mean my husband? Really, Marcolo, the revellers outside have warped your perceptions. Yes, he is here. Sharing cigars and cognac in the back room with his business associates. A private affair.”

“Then surely I must wait to see him?”

She nonchalantly slips him a business card. “Why should the representative of a Venetian shipping magnate need wait? He is expecting you.”

She sips from her cocktail, a mix of jenever and vermouth, as he looks over the card. He smiles warmly at the cover identity she has provided. She thinks of everything. “Signoraneta Martini, I am at your service.”

“Please do hurry back, my dear friend,” she purrs, touching his arm.

He pockets the card and advances towards the back room. His fin is out now. He can feel the predatory blood flowing. All else fades into background noise. He walks to the back room door where a thin dark man, possibly a Songhai, stands guard. He hands over the card. The guard nods and opens the door.

Smoke flows through the air like a lazy pool or lost spirits. Hearty masculine laughs punctuate a half-intelligible conversation. Marcolo spies his mark: Dottore Antonio Martini, industrialist, philanthroper, aviator, gun smuggler. “And let me tell you gentlemen,” he says suggestively, “never was the whisky sweeter… or the company more appreciated!” Another bawdy laugh. “Ah,” he says, spotting Marcolo and standing, extending a hand. “You must be Signore Cordon.”

Marcolo grasps the hand tightly. “An honor, Dottore Martini,” he says, affecting a florid demenor. “I have heard you, perhaps, needed my services?”

“Perhaps, my friend, but business can wait. Is it not Martedì Grasso? Have a seat. The cognac is Jardin and the cigars Cubano.”

The cigar and brandy is indeed fabulous and both go down smoothly. Their soft caresses bring to mind the soft caresses of Signoraneta Martini, likewise cuckolded from this loud nuovi ricchi buffoon. Marcolo laughs dutifully at the Dottore's lame jokes, nods sagely at his plebian philosophies, all the while sniffing out his weaknesses and his blind spots. Soon, he promises himself.

The Dottore is almost charming, almost intelligent, almost likeable. It hardly matters. He has more reason to hate this man than just lust for his wife. The man is a menace, selling aircraft and arms to any pissant nation with delusions of grandeur, any old African or Asiatic state hoping to take a place at the table of nations, any revolutionary cause that catches his flippant attentions. The man has armed Lulunkono seperatists and the Kongolese airforce alike, sold seaplanes to both Floridiano militarists and Aniyunian irredentists vying for the same airspace. He is a one man destabilization and an impediment to the proper imperial order of things. But Marcolo smiles, and continues to patiently circle his prey.

Finally, the moment presents itself. “Signore Cordon,” the Dottore says finally. “Perhaps you would care to speak on the patio?” Hand on Marcolo's back, Dottore Martini leads him up some stairs and out of a door. They exit onto a spacious rooftop patio overlooking both the revelrous streets on one side and the roaring Mediterranean crashing below on the other. “Signore, as you know I am a man willing to take risks in business, and such risks require men willing to gamble with me. It also takes men who know when to keep quiet. My wife tells me you are such a man, that you have done many favors for her family over the years.”

“I can honestly say it is been my pleasure to service your wife,” Marcolo says, smiling.

“She says you have a specially modified ship for… special cargo, and a relationship with port authorities in Athena, yes?”

“Of course, Dottore. I have done many… discrete transactions with the Greeks.”

“What is your thought on the Greek situation?” Dottore Martini asks.

Marcolo smiles in the dark. This is a weighted question. The continued Ottoman occupation of the historic peninsula is a tight subject with only wrong answers. The Turks are too important as trade partners, sitting as they are astride so much of the world's petroleum. But the continued possession–some would say occupation–of the cradle of western culture remained a sticky issue. Either Martini wanted to sell arms to Greek nationalists, or he wanted to arm their enemies in some move to ingratiate himself to the Ottoman business interests. Marcolo gives the one answer he knowns is always correct in these circumstances: “I think there is money to be made either way.”

Dottore Martini laughs and slaps him on the back. “Come,” he says, leading Marcolo to the seaside rail. “I have a special delivery to make. I will set up all the contacts and details, you need merely to make the delivery. Do you think you can do it?”

Marcolo turns and grasps the Dottore on both shoulders, smiling, as if to hug him. “Why sir, I expect my job with you to be sucessful and profitable indeed!”

The white suit Marcolo wears is well cut. It conceals not only the slight bulge of his pistol, but the true size of his arms and shoulders. With little effort he lifts Dottore Martini and flings him over the rail. The Dottore falls screaming onto the jagged rocks below. Marcolo watches for a second: the Dotorre's only movements are from the crashing of the waves. If alive he will be dead in minutes from bleeding if not from drowning. Smiling his shark's smile, Marcolo marches back down into the casino.

Moments later he is back by his Signoraneta's side at the Baccarat table. Her stash of chips has grown considerably. “It is done, my love,” he says.

She smiles, hawk-like. “And you know we can no longer see one another, yes?”

“An unavoidable tragedy, my dear,” he says. “But your memory will be firm in my heart for years to come.”

She kisses his cheek warmly and slips a trio of 10,000 ducat chips into his pocket. She has reason to be generous: she has just inherited several hundred million ducats from her late husband, after all. Marcolo bows low to kiss her hand, then turns and heads to the cashier to convert chips into voucher and then heads for the exit. Between the Signoraneta's generous payment and the much larger sum he'll received from the Danes he can live quite extravagantly for some time to come. Perhaps he can even say he'd made the world a safer and more orderly place.

But in truth, he'd have willingly done the job for free just for the pleasent sight of that pompus ass Martini broken on the rocks of the Monaco shore.

The World of Mañana

1)
Author's Note: This story originated as a flavor text Prologue for the Timeline of Mañana when originally vetted on AH.com.
2)
Scaramouche, Harlequin, Brighella, Il Dottore, and Columbina are characters from the classic improvisational theater Commedia dell'Arte; check them out, they hold symbolic purpose…
shared_worlds/manana_business.txt · Last modified: 2019/03/29 15:13 (external edit)