One Key to rule them all,
One Key to find them,
One key to bring them back and in the Darkness bind them
In the land of AH.Com where the shadows lie.

Originally devised by Thande, the idea is to give every country a colour so that maps showing far-flung colonial empires etc. can immediately be recognised. Other mapmakers have since added considerably and improved the UCS, but it has encountered controversy over whether it is overused in the Map Threads.

Slightly different versions of the UCS are used by different mapmakers due to difference of opinion, but the One Key, made by Calcion and euio, is now accepted by most mapmakers.

Colours are usually chosen based on historical data where possible. The original base colour scheme came from the Atlas of World War II.

There remains a debate as to whether there should be one UCS for ancient times and another, reusing colours, for periods after about 500 AD, but this seems to have been solved by the division of the UCS into four sub-schemes (Ancient, Medieval, Early Modern, Late Modern). This has been accepted into the One Key.

Britain and British Empire Pale red - the British Empire was always red on contemporary maps, red being the colour of British uniforms, but the map ink tended to pale to pinkish. After the rise of the USSR, this pale red was used as blood-red had connotations of Communism.

United States Teal - the USA should also be blue, technically, but as France already has it, the US gets a greener shade.

Germany Grey, as in field-grey uniforms.

Imperial and republican Russia Gold to evoke the Tsarist flag. (Some people think it should be green to continue the uniform theme).

Italy Brown, taken from the aforementioned Atlas of WW2.

The current Universal Four-Period Version, compiled by Xeno and Calcion: 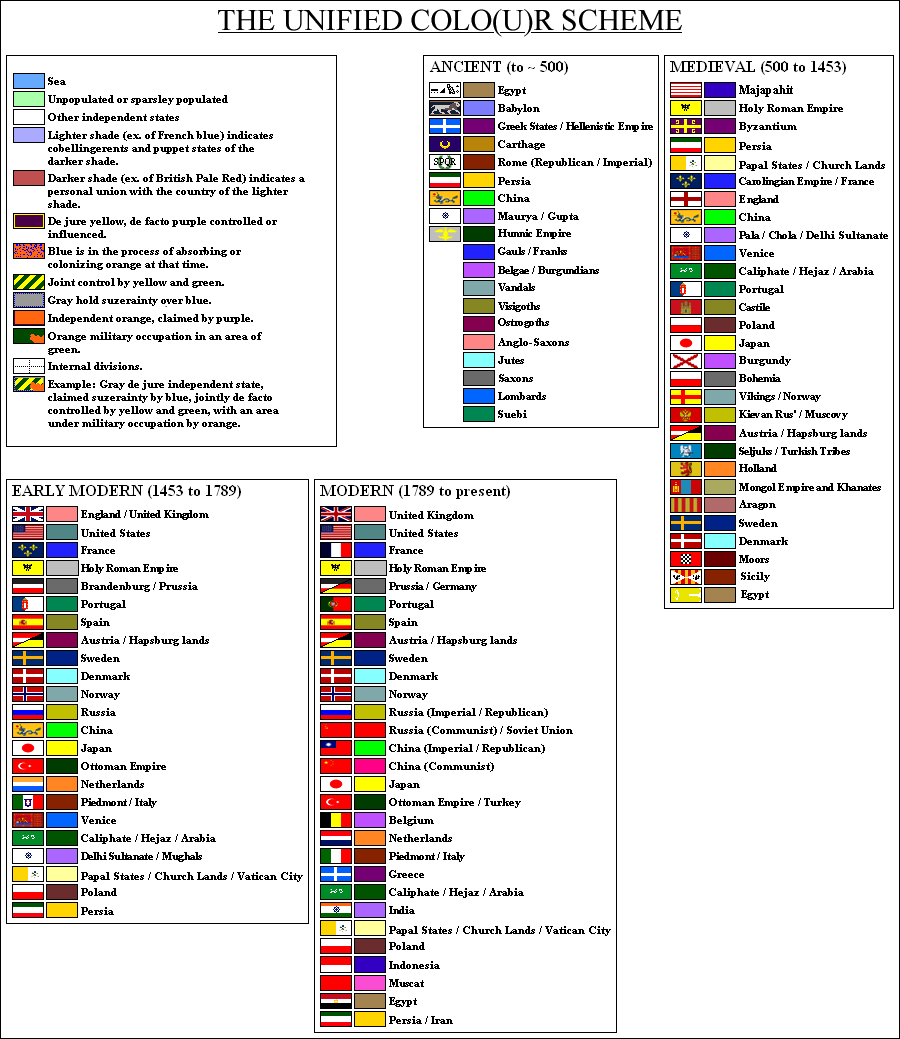 The most advanced single-period version, by Calcion: 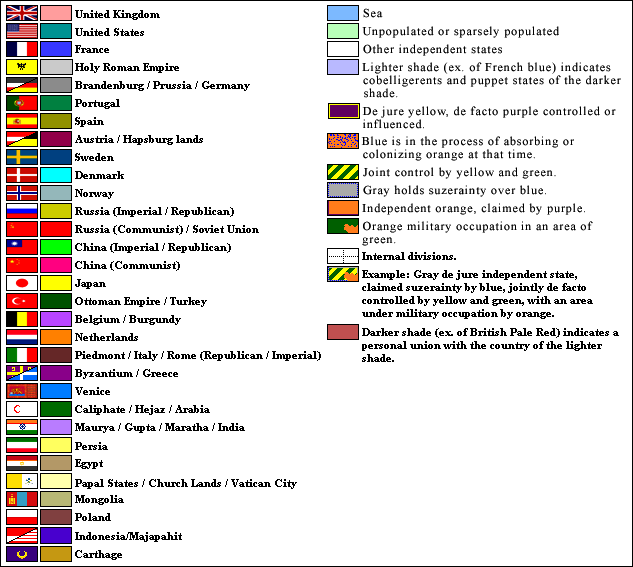 An earlier example of the UCS: 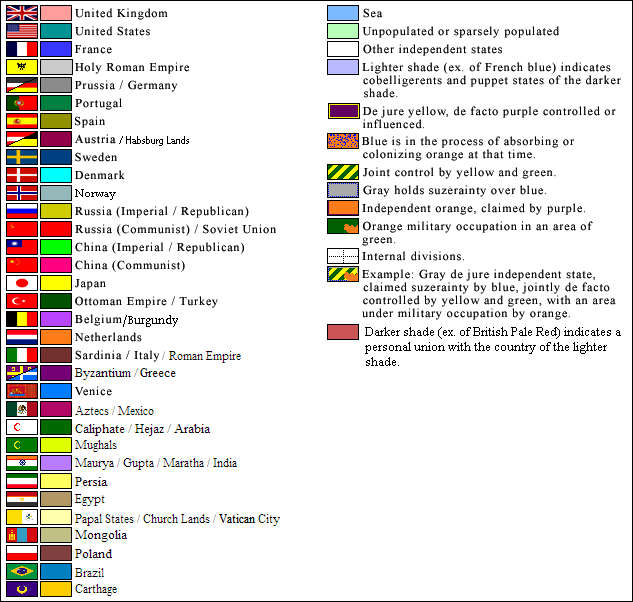 Alternatives to and controversies about the UCS

While the UCS is the largest unified colour scheme on AH.com, hence the name, of course only a relative minority of AH maps employ it (although it has become the dominant standard for OTL maps, as was originally intended). Some parts of it enjoy use outside the UCS as a whole, like certain colours for certain nations (blue for France and pale red for the UK, for example), but just as often even those standard colours are not used.

Scarecrow has let it be known that he is the most virulent objectionist to the concept of the UCS in and of itself, a fact stemming from an argument about Decades of Darkness maps with Thande. FallenMorgan also thinks poorly of the UCS.

The UCS clarification conference was launched by Thande in October of 2010 to discuss whether UCS needed any changes. This spawned a lot of discussion, and eventually spawned the Russian colour poll.

The Russian colour poll was a poll made by Thande about whether Russia should be green or golden yellow on UCS maps.

After much discussion in the UCS clarification conference the community was divided, and so Thande set up a poll to put the issue to a vote. This sparked an almost-massive conflict between those who believe Russia should stay gold and those who wanted it green, calling themselves Greensheviks. The Greensheviks eventually formed a loose organisation, drawing on Soviet rhetoric to promote the “green revolution.” They were opposed by the conservative Goldilocks faction.

But like any true fringe party there were schism within the Green movement. Some just wanted Russia to be green, others wanted more changes to the UCS. Some went so far as the say that UCS was shit and a new standard had to be implemented. They called this the ACS.

In the end after much voting it looked like gold was going to win, much to the delight of the Goldilocks. However, in a surprise turn just some hours before the end of voting green made a come back and eventually won by two votes (183 to 181). Russia was now green, although many still refused to accept it.

In compromise, Thande followed up on this with a new version of the UCS, otherwise known as the TCS, which had both Gold and Green Russias, along with the traditional Red Soviet Union. This was later extended futher into the current RCS by Alex Richards to take into account the plethora of new colours required by the medieval era basemaps.