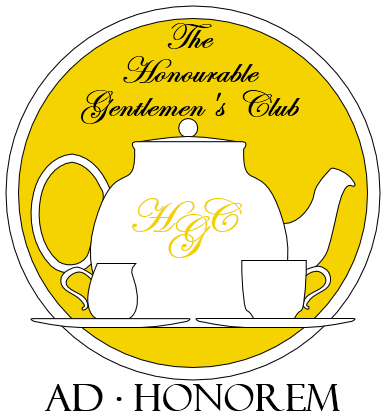 Offical motto: AD HONOREM (English: “For (the) hono(u)r”, i.e. not for any material reward).

There are currently 58 members of the HGC, as listed below:

Membership of the Honourable Gentlemen's Club is restricted to people who are jolly nice and damned honourable! There are no restrictions on nationality, class or gender: you merely have to be good and honourable.

At the moment the Honourable Gentlemen's Club's goal is to spread friendship, happiness and understanding across all of AH.com and - if possible - beyond! How? Well by being excruciatingly nice, of course! We aim to stop arguments before they get out of hand by inviting anyone and everyone to calm down with a lovely cup of tea and a slice of Battenberg!

There are only two ranks in the Honourable Gentlemen's Club: Fellow of the HGC and Chairman of the HGC. The Chairman, de jure, holds all power over the society, but as an Honourable Gentleman he's sure to take any and all suggestions and opinions into account. In case you're wondering, Krall is the current Chairman of the HGC. Other positions hold no de facto power of their own, only those powers which are given to them by the Chairman.

Just ask! Provided you're an honourable fellow - or lady as the case may be - you're welcome to join or leave us at any time! As a matter of policy, everyone is assumed to be perfectly honourable when they first apply for membership; if you later prove to be rather dishonourable we may have to revoke your membership (though I understand that we all have the occasional off day).

Positions within the HGC

Krall is the Chairman as he founded the HGC and claimed the title. No one has objected, the unwritten rule of it being 'Ungentlemanly' to usurp him.

The Honourable and Gentlemanly Welcome Committee

Members of the Welcoming Committee

The Honourable and Gentlemanly Wisdom Institute

Honourable Director Lord Roem - In charge of the Wisdom Institute . The Institute is responsible for hosting lectures by fellow members. He is known as the “Silencing and Terrifying Fury of Upstairs” by the Gentleman Ushers.

Colonelgoth - A friendly street tramp that frequents the street outside the HGC. As a precautionary measure Krall conducts a regular count of the silverware and reminds members not to indulge in Trading Places-esque bets.

Presently resides in a small, eloquently designed and built shack underneath the main stairs.