This is an award presented to works of note on the forums.

Recognising that a lot of very hard work and effort goes into many of the works here on the board, Sargon in the past awarded a Seal of Approval to those stories he had read and found very good in various ways.

The very first ever awarded such was Isaac's Empire by Basileus Giorgios some time ago as this had been inspired in part by Sargon's own Byzantine TL being awarded a “Seal of Approval” by Midgard which Sargon considered high praise due to Midgard's expertise in Byzantine History. He felt it would be a nice way to show his approval of a fellow Byzantine TL writer's well written and executed work since he by now had his own reputation for being something on an authority on the matter. As such, a recognition from a fellow expert would hopefully help the writer feel their work was greatly appreciated just as Sargon had felt when Midgard had done the same.

Since then, Sargon, joined by his partner Sai, have read many stories together on the board, and those that they feel are original, well written, exciting, cool, unique or otherwise noteworthy have been awarded their own Seal of Approval. Although they may not be experts in many of the fields covered, they do enjoy good writing and well executed ideas and it's a way for them to show their appreciation of hard working forum members.

Since in board culture they are recognised as the Grand Empress and Grand Emperor-Consort of the forums, they have made it into an Imperial Seal, and hope that the recipients feel as happy and appreciated when they receive one just as Sargon felt honoured all that time ago by Midgard's praise and appreciation of his work posted on these forums.

Ever since the debate about the quality of threads in the ASB forum erupted, it has also been viewed as a particularly constructive way to encourage talent and well written works there as part of the Landshark Offensive and more Imperial Seals of Approval are likely to be awarded to other works in other forums on the board in due course once the of reading them has been caught up with.

Recipients sometimes feel like placing a line in their sig to say they have received such an award although this is by no means necessary and is something spontaneous that has occurred as a result of the awards without any request from Sargon or Sai themselves. However, it is acknowledged this perhaps hopefully encourages even more members to follow the link and read the stories, and is noted by them both with humble thanks. As Sargon is known to favour decent works and diligent efforts across the board rather than some of the more “creepy teenish” threads that appear, then there's a degree of confidence that if a work is approved, then it is likely to be a good or interesting one, and thus probably worthy of members' time to have a look at.

The following works in chronological order have so far been awarded a Seal of Approval:

The Imperial Seal of Approval consists of the Imperial Arms of the Grand Empress of AH.com on a white circular background with a motto on a ring, all placed upon a blue field. (Sargon managed to knock this up with his sub-par photo editing skills, so please feel free to make improvements and fine tuning upon the design if necessary): 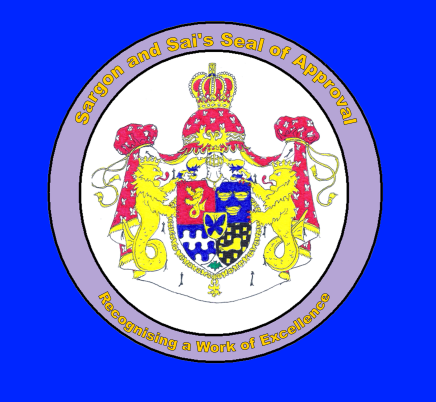