Quite a popular topic to discuss on AH.com - usually in a tongue-in-cheek way - and also even a hobby to some AH.commers. Sometimes, micronations are met with derision on the site, other times with praise, and most often, their assessment is somewhere in the middle and fairly neutral.

Viable micronation - is it possible ?

Discussions on micronations of AH.commers

Opinions about Pennylvnd (NOT A PISSING MATCH etc. etc.)

The Greater Kingdom of Oskania

Did any of you found your own micronations ?

Reformation of the Pennylvndian Nation

Membership for the League of Micronations

The League of Micronations

Charter Convention for the LoM

Council of the League

Arranged in alphabetical order. Click the links in the names of the micronations to see their flag.

Full name: Empire of Amervea
Founder: Noravea
Founding date: 24 June 2011
Location: Noravea's parents' property, his grandparents' property, and his aunt's property
Government: Monarchy
Current head of government: Emperor Nicholas I.
Language: English
Religion: First Imperial Church of Amervea (headed by Archpope Thespitronius MMMMMM, at his own insistence)
Military: There are two members of the military, Noravea, and his brother. The inventory includes airsoft guns, a large amount of swords, a single bow and arrow, and two crossbows.
Trivia: Claims ownership of the “Imperial Colony of Mars”.

Full name: Antarctic Socialist Republic
Founder: Gray Antarctica
Founding date: 25 June 2011
Language: English, high-pitched penguin localisations
Military: According to GA's own account, “I've had to make do with human paramilitary forces and some UAVs. MQ-9, mostly. The bigger penguins have .22LR ultravelocity recoilless rifles strapped to them. The extra fast custom .22LR has extra punching power compared to normal .22LR. Much better than normal .22LR. The guns are open ended while firing, they are electrically fired. You don't want to be hit by it. The guards have AK-74s and PKMs. I've considered a few 20mm and 40mm guns on old BMPs. Maybe some 76mm. 105mm guns will arouse suspicion, and tanks would probably get us invaded.”.
Trivia: In a state of cold war with Amervea. Has claims on “all unnoccupied territory on Antarctica, and a Helium 3-rich stretch of land on the Moon”. On the topic of the economy, GA notes that “Yes, I get alot of money from our oil and mineral exports. Also, we extract industrial-use chemicals from penguin waste, which there is plenty of.”.

Full name: Dictatorship of Charl
Founder: charl
Founding date: 18 January 2011
Trivia: Has an alliance with the Kingdom of Domtopia.

Full name: Moogi Empire
Founder: LordMoogi
Founding date: 21 January 2011
Current head of government: “His Awesomeness Imperial Archkhan Lord Protector Saint Grand Admiral Doctor Princess* Sir Caesar Moogi, PhD, VC, BM**, MB***, BMF, BYOB, Lord of All the Beasts of the Land and Fishes of the Sea****, Grand Master of the Most Serene Order of Awesome, Sweet Transvestite, Conqueror of Psychoses, Loremaster Emeritus, and All Around Great Guy (* - because everything's better with princesses, even if they're male; ** - Blackboard Monitor; *** - Magnificent Bastard; **** - if it's good enough for Idi Amin, it's good enough for me)“

Full name: Empire of Nova Elysium
Founder: Alex Richards
Trivia: On the history of the Nova Elysian flag, Alex has revealed that “Technically, it's just the Imperial Standard, but the multi-dimensional aspect of the Empire means that this is the most commonly used flag to represent the nation as a whole. As a side note, the Dragon is Lungh Huangh Pengh, the great protector of the Imperial domain. The 4 globes he holds are the subject of a lengthy epic and have given rise to the expression By the Great Gilded Globes of Lungh Huangh Pengh, roughly equivilant to Good Grief.”

Union of Tyras and Sueb

Full Name: The Union of the Principality of Tyras and Grand Duchy of Sueb
Founder: Konrad13
Founding date: 21 November 2009
Current head of government: Konrad Alexander I
Population: 1
Trivia: “The entire populace (1 person, the monarch) have voted to currently suspend the constitution until such time that a new and better one may be formed. We have a full holiday list for the year, a knightly order, and a flag to boot!” 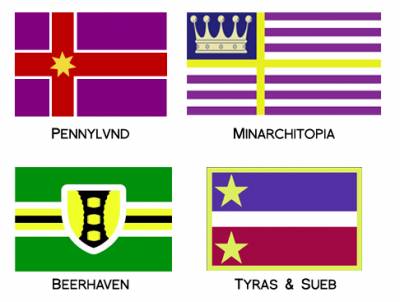 MicroWiki - An extensive micronations wiki, the largest on the Internet.

The Rise of Micronations - An older Shared Worlds RP by LordVetinari.