The Greensheviks arose from the UCS Reform. Thande proposed that Russia should be colored green instead of gold because the Russian traditional uniform color is green, like the French blue and German gray (although Susano will complain that's only in WWI). Supporters of Russia's color reform began using Soviet propaganda, labeling themselves “Greensheviks” opposed to the “reactionary” Goldilocks faction that favored Russia's old color. 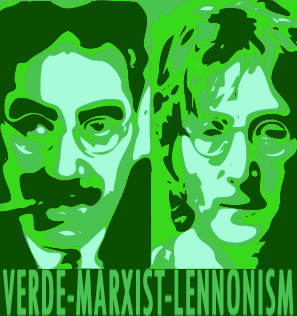 A well-meaning poll turned into civil war (of course, it was Thande's poll), which pit brother against brother, comrade against comrade. Every day the two would be nearly tied, though Gold would usually be a few ahead. The community was torn asunder for five long days. Thinking they would lose the vote, some more radical Greensheviks went off with Susano (who didn't even use the UCS but was interested in German color reform) to form the ACS, while the Girondin Greensheviks praised “reform, not revolution.” But to everyone's surprise, Green prevailed 183-181. The Girondin Greensheviks then tried to finish UCS reform, which had been damaged by the ACS faction, and repair their image, which had been sullied by excessive gloating of their victory. Many old ACSites adopted their more radical proposals.

The “Official Greenshelvik [sic] thread” was founded by the Girondins (specifically, Ynnead in order to consolidate their party; in parallel, the UCS Clarification Conference continued devising a new edition of the UCS.

“Purpletariats” was a term coined by michaelk156 to describe eir faction, standing in favor of a purple France and in opposition to the blue of the “Blueoisie”.