She is joined in the throne by His Imperial Majesty, the Grand Emperor Consort Sargon.

A fun role in AH.com culture created by Sargon who appointed his real life partner in this role, following her good care of him in times of serious ailment. She gave up her job and home to travel to Sargon's home country to do so, and creating her as Empress cheered both of them up. Empress Sai was recognized by the Imperial Bill on August 17th of 2009, but they are also recognised outside of politics in the cultural area of AH.com

The many titles of the Her Majesty, the Empress: Her Imperial Majesty, Grand Empress, Augusta and Basilissa Sai of AH.com, Imperatrix of the Tasty Stir Fry, Sultana of the Holy Sealion, Queen of Thai Kick Boxing, and Kaiserin of Chaos.

She has her own Coat of Arms posted/designed by Benkarnell & Maharajah which comes with the following elegant description:

Quartered, first gules a sea-lion Or, second azure three woks Or, third barry nebuly of four azure and argent, fourth sable billety Or a foot couped of the second, enté en point argent a bat vert, on an inescutcheon Or a butterfly asure; And for the crest upon a royal helm with crest coronet a bicephalous eagle Or beaked and orbed of the same, mantled azure doubled Or, the shield surrounded by the collar of the Order of Turtledove; and for supporters two Sea-Lions Or crowned of the same armed and langued gules; the achievement beneath a pavilion gules semy of butterflies argent doubled ermine, fringed and tassled Or and surmounted by an Imperial crown. 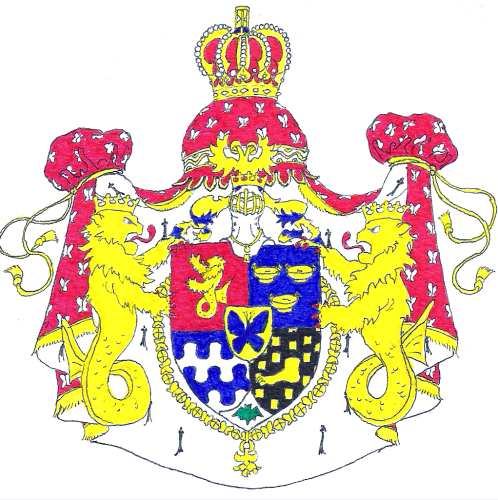