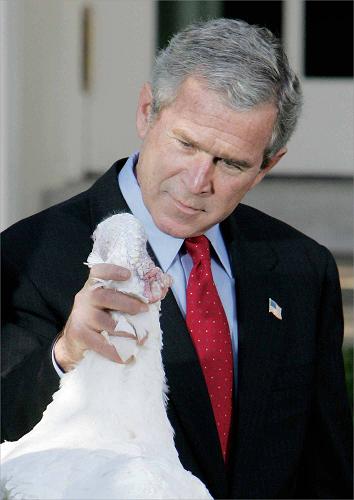 43rd President of the United States, and without a doubt the most widely respected, internationally adored, and politically bipartisan president of the years between 2001 and 2008. The son of 41st president George H.W. “Read my lips” Bush, his election sparked consideration that America might be turning dynastic. However, such hopes were soon dashed.

Bush was elected in 2000 by the smallest margin of votes in history, failing to win the popular vote (as all the popular voters all preferred to hang out with Al Gore, as he made them look more charismatic by comparison). Controversy over the election ran for weeks with recounts in Florida, a state governed by Bush's brother Jeb. The key issue was that of Chads, as America had decided to scorn the old-fashioned 'put cross in box' style of ballot papers in favour of a new and exciting system that combined malfunctioning voting machines with suffrage being dependent on the ability to use a hole punch. The U.S. Strategic Command at one point got the wrong end of the stick and thought that in order to decide the election they had to use America's nuclear arsenal to punch the Republic of Chad out through the middle of Africa to leave a suitable hole, but they were fortunately stopped by Al Gore out of Global Warming considerations. While Gore's back was turned, Bush got himself decided president.

The War on Tourism

Bush's first few months in office were noted for him making headlines as the greatest orator of our times since John Prescott, and a spy plane crash in China which for a moment made it look as though the existing superpower and the emerging one were heading for a global clash. However, frustrating all the WW3 fanboys in the FH forum, this was rapidly swept under the carpet after terrorists from Al-Qaeda crashed two Greyhound buses into the Empire State Building to kill King Kong (or something; the media didn't cover it enough for me to be certain of all the details). Bush immediately announced the War on Tourism, insisting that transport was now too dangerous and people must be discouraged from using it by means of having all their precious bodily fluids removed at customs. This policy proved popular in the Republican-voting heartland, as they never went anywhere anyway.

Having identified noted terrorist Obama Biden as the perpetrator, the USA invaded Afghanistan and thus achieved the great success of driving all the Taliban into Pakistan. Two years later, Bush also launched the controversial invasion of Iraq, on the basis that there was a clear and definitive connection between it and Al-Qaeda.[1] This war and occupation was remarkably successful and all critics of it immediately got red-faced and went home muttering to themselves.

Bush was reelected in 2004 after the Guardian encouraged thousands of Ohians not to vote for John F. Kerry, a former Easter Island statue who had been disqualified from the post for being made of wood rather than stone. Kerry's campaign had focused on attempting to make his signature look as though the “RR” was spelled “NNED”, while Bush's consisted of repeating the words “tax cuts” every five minutes while maintaining the level of spending on the two wars, a strategy admirable for its use of imaginary numbers.

In his second term Bush couldn't open a door in China. And then the economy fell to pieces. That's basically it.

He was succeeded by Barack Obama.