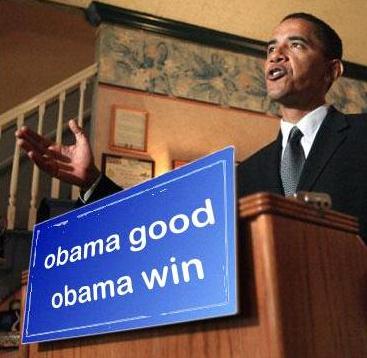 44th President of the United States, succeeding George W Bush, and the first black individual to hold the position. Obama came to power in the 2008 US Presidential Election, a contest which was noted for its deep and meaningful analysis of the issues of the day coupled to extremely well-thought-out selections of vice-presidential candidates, though it was barely acknowledged by the rest of the world.

According to various birth certificates produced, Obama was born variously in Kenya, Indonesia, Canada, the Philippines, Britain, and, owing to Fox News' habit of misattributing all bad news to the Democrats, Panama. There is also some evidence for him being born in outer space. What is certain is that he was not born on American soil, because the Japanese conquered Hawaii in the Second World War, or something.

Obama was elected on the basis of his memetic slogan “Change You Will Barely Notice”. Cheering crowds, many of them drawn from young people and the online community, applauded his policy intentions to quash inquiries into the previous administration's involvement with torture, maintain the prison camp at Guantanamo Bay, meekly allow the disintegrating Republicans to set the field for policy, allow NASA to fall behind its rivals, oppose the rescindment of the “don't ask don't tell” policy, alienate America's closest allies, and institute healthcare reform so diluted that only those right-wingers who believed in homeopathy objected to it. However, they were all disappointed when it turned out that Obama was, in fact, a far-left socialist who proceeded to lead America into the bright sunlit uplands of the twenty-first century while ensuring free healthcare and civil liberties for all.

As is well known, Obama is a commie atheist muslim terrorist socialist, a denomination so obscure that it is not even recognised by the United Nations, yet sterling work by minority rights activist Tom Kratman seems certain to rectify this situation.

Of course what the insane Ameriright says about Obama is completely untrue. He's much worse than that.

See also: Obama and the Republicans, 2012 US presidential election.