Like: while CSA survival until 1914 is unrealistic, it has definite narrative potential. But it gets completely messed up in favour of parallelism to the max.
Click to expand...

I feel like a CSA that survives past the 1800’s is unrealistic.

Ah, but remember one of the unbreakable rules of AH - a post-WWI Germany must always descend into some form of jack-booted Wehrstaat dystopia, whether they win or lose, OTL Versailles or ATL Versailles, no matter what. It's right up there with the inevitability of American Manifest Destiny...

The POD is Japan saying "Hey, you know how we've been planning to go south to ensure the empire for decades and we just got a really bloody nose dealing with the Soviet Union? Let's attack the Soviet Union!"

This magically results in a TL with the following:
-The Soviet Union completely collapsing.
-Japan invading, holding, and genociding Australia.
-Churchill randomly giving up and surrendering.
-Germany gets the bomb first, nukes New York, and America immediately surrenders.
-America stands as one to oppose the export of the Final Solution to the US
-Albert Speer saves the day by finding out the Holocaust is happening.

Cryhavoc101 said:
Harrison went the Hollywood route - don't let historical facts get in the way of a story
Click to expand...

Yeah but he gets extra credit for “A Transatlantic Tunnel, Hurrah!l” which is just weapons-grade silly and awesome.

Deleted member 94680 said:
The majority of Turtledove’s stories are cut and pastes of real history with the identities changed to suit his story.

Jeez, what was that one he spewed out that had the American Civil War with blondes instead of blacks and magic carpets instead of railroads that literally functioned exactly like railroads. It had no point whatsoever other than “exactly the civil war, with some cosmetic changes”.

Reggieperrin said:
Yeah but he gets extra credit for “A Transatlantic Tunnel, Hurrah!l” which is just weapons-grade silly and awesome.
Click to expand...

...there's a transatlantic tunnel in Stars and Stripes?!

Resurgam said:
...there's a transatlantic tunnel in Stars and Stripes?!
Click to expand...

No, it's a different book.

Resurgam said:
...there's a transatlantic tunnel in Stars and Stripes?!
Click to expand...

No, but there should have been. Transatlantic train tunnels add 300% more awesome silliness to anything. 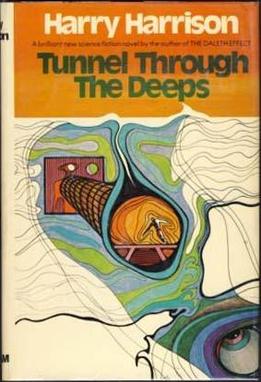 Tunnel Through the Deeps - Wikipedia

Philip Roth's The Plot Against America springs to mind. He somehow manages to make the fascist takeover of America boring. And far more than general improbability, I'd say the greatest crime an author can commit is creating a boring work. It's 400 excruciating pages of Roth reminiscing about his childhood growing up in 1940s New Jersey, in which nothing memorable happens.
You must log in or register to reply here.
Top
Share:
Share
Top